Stay-at-home orders have had a significant effect on reducing the number of people hospitalized for COVID-19, according to a University of Minnesota study published Wednesday in the Journal of the American Medical Association (JAMA).

For the study, U of M researchers compared projected coronavirus-related hospitalization rates with actual ones during roughly one-month periods earlier this spring when statewide stay-at-home orders were issued in four states: Minnesota, Colorado, Ohio and Virginia. Those states were chosen because they had reliable and consistent hospitalization numbers for those periods.

The projected growth rates were based on how many people had already been hospitalized with COVID-19 before the stay-at-home orders were implemented. The actual numbers were obtained from statewide hospitalization data.

The study’s findings were rather stunning. Roughly 12 days after people were instructed to shelter-in-place, the number of COVID-related hospitalizations in each state began to dramatically deviate downward from the projections.

“We found that the hospitalizations were roughly two to three times lower than what would be expected based on the initial trends,” said Soumya Sen, the study’s lead author and an associate professor in the U of M’s Carlson School of Management, in a phone interview with MinnPost.

“Our findings show that stay-at-home orders have a role to play in slowing down hospitalizations,” he added.

That 12-day mark in the findings is significant. For as the researchers point out, the average incubation period of COVID-19 is four to five days, and the average time from first symptom to hospitalization is seven days. So, if stay-at-home orders were having an effect on hospitalizations, it would begin to show up around the 12-day mark.

In the aftermath of Minnesota’s March 28 stay-at-home order, the number of actual COVID-related hospitalizations was much lower than the projected number. For example, on April 13, five days after the average effective date of the stay-at-home order, Minnesota’s COVID-related hospitalizations numbered 361. The projected number for that date had been 988.

That meant that 64 percent fewer Minnesotans were hospitalized with COVID-19 on April 13 than the data had projected.

Similar — and even larger — drops were seen in the other three states on the dates that fell five days after the average effective date of their stay-at-home orders:

Other factors — such as school closures, adherence to social distancing guidelines, good hand hygiene practices and general pandemic awareness — were undoubtedly also involved in lowering COVID-related hospitalizations, acknowledge Sen and his colleagues in their paper. Yet they also point out that many of those measures were already in place before the period from which they gathered their data.

Keeping an eye on the numbers

“We felt this is a really challenging situation to which we can bring in the power of data systems and analytics in order to help decision-makers and policymakers and public health officials make better decisions and to also make the public aware of the trends from the data,” said Sen.

The study’s findings are based on actual numbers, he stressed. “We are not making any guesses or estimates,” he said. “We are just reporting the raw numbers because we think the numbers speak for themselves.”

The study suggests that Minnesota has done relatively well in regard to slowing down COVID-19 hospitalization rates. Sen cited a couple of possible factors for that outcome. 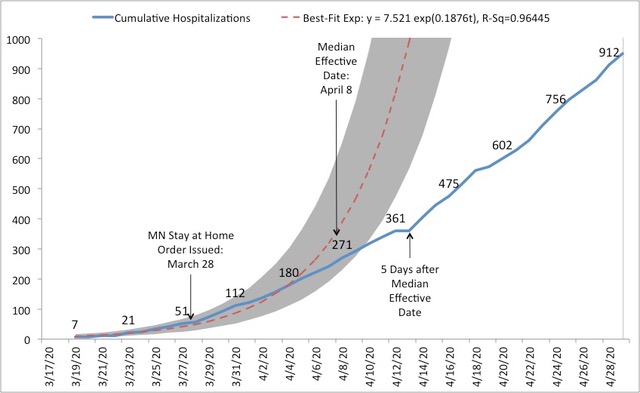 “We saw COVID-19 arriving a bit later than other states,” he said. “And we had a stay-at-home order issued relatively quickly compared to some of the other states.”

But the study’s data also suggest that Minnesota’s hospitalizations rates could climb quickly if the state opens up too soon.

“A gradual opening up with a very keen eye on these numbers would be advisable,” said Sen.

“Our hope is that we won’t see that kind of exponential growth that we have been able to avoid so far,” he added.

FMI: The study is posted on the JAMA website, although the full paper is behind a paywall. You can read more about the U of M’s COVID-19 hospitalization tracking project, including the latest state data, at the Carlson School of Management’s website.