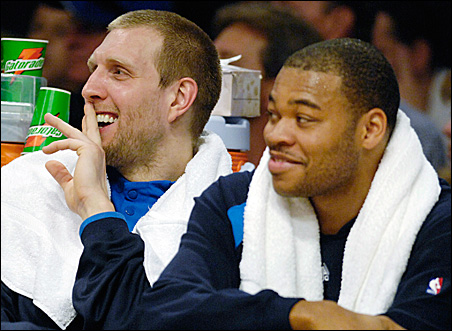 REUTERS/Chris Pizzello
Dallas Mavericks Dirk Nowitzki, left, and Devean George share a laugh on the bench during a 2007 win over the Los Angeles Lakers.

We live in a shorthand society, where the public labels slapped on people in the news typically run six words or less. And most of the time they last for weeks, months, years, occasionally even lifetimes, more like tattoos than any of those “Hello, My Name Is …” seminar stickers.

That’s why, literally overnight, people who knew next to nothing about George — a native of Minneapolis and a product of Benilde-St. Margaret’s and Augsburg College — suddenly disliked him and blamed him for scuttling a blockbuster NBA deal Wednesday that would have shipped Kidd to the Dallas Mavericks.

Collective bargaining agreement gave George veto power
A bunch of Mavericks — including George, a couple of Nets and a handful of draft picks — were all set to switch sides until the 6-foot-8 forward/guard, through his agent Mark Bartelstein, slammed on the brakes through an obscure clause in the league’s collective bargaining agreement with the players union. Basically, it gave George the power to refuse a trade so he could preserve his “early Bird” free agent rights after this season.

Because he is finishing up his second consecutive one-year contract with Dallas, George will be eligible to re-sign with that team for multiple seasons, at a salary far exceeding his current $2.37 million regardless of the Mavericks’ salary cap. If he accepts a trade now, George loses that mechanism and could be limited to a one-year deal there or elsewhere for whatever amount a team could fit under its cap.

In theory, by preserving his “early Bird” rights (so named for its application two decades ago to Boston Celtics’ legend Larry Bird), George even could agree to a sign-and-trade deal this summer, getting more years and a move out of Dallas.

Maverick fans quick to give George grief
Which is what he might prefer, at this point. Within minutes of news reports that George’s decision had snagged the Kidd trade, Mavericks fans already were giving him grief.

“Yeah, I heard, ‘Quit being selfish. Come on. We want Kidd.’ ” George told reporters after Dallas’ home game at American Airlines Center. “It was disruptive for everybody, not just me. I don’t know when it will happen.

“All the fingers are pointing at me. I’m the bad guy now that is holding things up. But I’ll be that.”

No need, said Timberwolves forward Mark Madsen, a teammate of George for three seasons with the Lakers. “Everything Devean George did is within the rights of his contract,” Madsen, the Wolves’ union rep, told me. “This is a business and, guess what. It could be any one of us the next day. Devean George is a smart veteran, a great player and a good guy who has had a very good NBA career.”

Still, fans in Dallas were excited about the return of Kidd, probably the NBA’s best pure point guard and a future Hall of Famer who began his career with the Mavericks. They were angry Wednesday night. Fans in New Jersey who liked what Dallas had offered — a package including young point guard Devin Harris, George, Jerry Stackhouse, DeSagana Diop and two future first-round picks — were angry, too, over a blown opportunity to revamp their team.

And it was all George’s fault. Some people wondered, “Who does he think he is?” Others simply asked, “Who is this guy anyway?”

Longtime friends spring to his defense
“A lot of people who probably don’t even know him are pissed at him now,” Dawn Ammann, wife of former Augsburg coach Brian Ammann, said Thursday. The Ammanns still are friends with George, and it was at Augsburg that the player — thanks to hard work, good coaching and a growth spurt — became the first Division III player ever drafted in the first round of the NBA Draft (1999).

“But he is definitely not a jerk,” said Ammann, working the phones at the Minnesota School of Basketball her husband now runs while Brian was on a scuba-diving trip to the Honduras this week. “Devean has stayed so grounded, it’s unbelievable.”

Playing like a man among boys in the MIAC, George averaged 27.5 points as a senior in 1998-99 and helped Augsburg to a 46-8 record his last two seasons. In his first three NBA seasons, he went home with NBA championship rings as an increasingly valuable member of the Shaquille O’Neal-Kobe teams in L.A. That earned him a four-year, $18.7 million contract in 2002.

“Devean is not arrogant,” Dawn Ammann said. “He knows where his roots are. He’s still a nice guy. He played Division III because he wanted an education. His mom [Carol] is a great lady. When he came back with the Lakers, he took our daughter [Kelsie] to meet Shaq and Kobe.”

That first big contract made it easy for George to donate to Augsburg’s new Kennedy Center for athletics. It also enabled him to move his mother out of their old north Minneapolis neighborhood. That’s where his younger brother Chafe and a pal, Byron Phillips, were playing — right on the front porch — when an errant bullet from a drive-by shooting struck and killed Phillips. George had driven home from college that day to do laundry and was upstairs in the two-story home when it happened.

“That was a point right there that just added more fuel to wanting to get my folks out of the area,” George told the L.A. Daily News for a 2003 story. “When you’re in that environment, you don’t have to be involved in what’s going on. You can have a clean nose, work your job every day, be a normal person and tragedy can happen.”

Taking heat for messing up a blockbuster NBA trade? Looks from here like George can handle it.

But the shorthanders might want to rethink their new label on him.