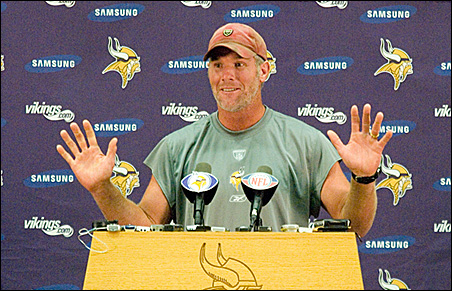 MinnPost photo by Bill Kelley
Brett Favre at his news conference: He doesn’t smother his emotions.

To fully appreciate the odd mating dance just consummated between Brett Favre and the Minnesota Vikings, we have to understand the one unchangeable reality about the life and anguishes of this old school football player.

Almost nothing he has done in his career meets the usual standards of natural law.

He played for years with injuries that would have hospitalized Godzilla. He set records for performance and uninterrupted play, week after week, year after year, that are unlikely to be seriously challenged. A year ago by unretiring the first time and joining the New York Jets he accomplished the novel feat of making half of the Green Bay fans mad at the Packer management and the other half mad at Favre.

Yesterday he arrived on the campus of his new employer, the Vikings, and it was a sight. Given more time to prepare, they would have rerouted the motorcade downtown and poured tons of confetti from the IDS Tower observation deck. As it was, he came accompanied by helicopters and the adoring smiles of the Viking ownership. Add the on-line sneers of most of the nation’s media corps, who accused him of being devious, coy, self-absorbed and childish.

They may be right. These things happen when Brett Favre firmly makes up his mind the fourth time. The blogosphere was filled with the fury of insults traded by Packer and Viking zealots. But when you look a little deeper at the possibilities of Favre and the Vikings, how much does all of that matter?

In other words, can Favre deliver? Time will make the judgment. How big was the money in this? The $12 million said to be the contractual price is the least of the money at stake and now very much riding on Favre in the huddle. The Vikings are going before the public next year with their proposal for $950 million stadium. The public will be asked, in the jaws of a recession, to pay all but $250 million of the cost. Reaching the Super Bowl, actually winning the Super Bowl, would be Exhibit A in the Vikings’ build-it-or-take-the-consequences pitch.

Instant credibility
The ultimate irony in all of this is that Brett Favre, for all of his records, is not likely to be the most significant of the reconfigured Vikings. Adrian Peterson, clearly the best running back in football, was that before the decision in Hattiesburg and he is probably going to be that in December.

But Favre in the Vikings huddle delivers instant credibility where there has been none since Daunte Culpepper was healthy and thinking straight.

Did the Vikings force the action and connive some? Certainly. Did they figure out a way to accommodate Favre’s pathological resentment of training camps? That, too. So you had the picture of the professorial Brad Childress transformed into a string-pulling Geppetto in the final acts of the melodrama. And he clearly played it well. He played the role less well in fostering a competition between the quarterbacks Sage Rosenfels and Tarvaris Jackson while keeping the negotiating lines open with Favre.

Yet you could not have watched the Favre news conference yesterday without finding, or re-discovering, a thoroughly appealing personality. Favre doesn’t try very hard to smother his emotions. He’s likely to cry, somebody once said, at shopping center openings. He was back in that mood when he told the story of his 10-year-old daughter’s disappointment and tears when he decided three weeks ago to stay retired. He didn’t spoil it by telling us it was the reason he changed his mind.

But Favre’s emotions on display are real and offer the fundamental clue why he will be wearing purple instead of green on his return to Green Bay Nov. 1. He’s not a very hard guy to figure out. Favre is going to be playing football for the Minnesota Vikings this year because he’s a football lifer. He is eternal youth, or as close to one as we’re going to get, a Huckleberry Finn who became a millionaire playing the game he learned as a kid.  It is a reason that surpasses money and even fame as goad in his life. He has trouble retiring because he can’t bear it when he does.

His indecisions about retirement can’t erase the judgment already made of Favre the football player. There is no one in football more popular among his peers, the players he plays against. One official who worked for years in the NFL calls him the toughest player he ever saw, a man accorded the highest tribute of his opponents, the pass-rushing linemen. “They eased up after he threw if there was a chance that they might hurt him,” the official said. “You don’t see that often.”

Football is business but also is entertainment. In the end, Brett Favre is less to be analyzed than enjoyed, for all of his well-documented anguishes.

MinnPost journalist Jim Klobuchar will be a guest on “Midday with Gary Eichten” on MPR (91.11 FM) at noon today to talk about the Brett Favre developments.