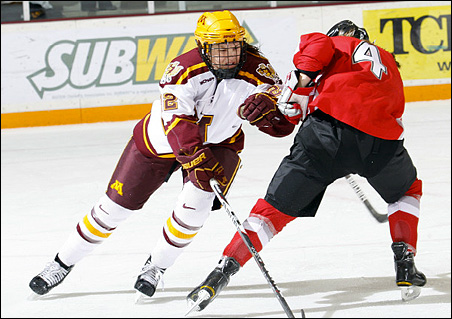 gophersports.com
Anne Schleper: “It’s really cool that we can come together and be teammates, and then be competitive the next weekend.”

Between Christmas and New Year’s, the top Americans on the Minnesota and Wisconsin women’s college hockey teams spent six days in Blaine at the annual USA Hockey winter training camp for the national team. Along with practices and scrimmages, the camp offered a chance for old friends to put aside rivalries and catch up.

The most dramatic moment involved four-time Olympian Angela Ruggiero, the most decorated and admired women’s player the U.S. ever produced, who walked into the dressing room and announced her retirement from international play. For the five Badgers and four Gophers, an additional topic dominated their conversations: Their two games today and Saturday at Ridder Arena, matching the top two teams in both national polls.

Wisconsin (19-1), coming off its fourth national championship in seven years, has been No. 1 since preseason. The 17-3 Gophers dealt Wisconsin its only loss, on Oct. 16 in Madison.

“We were talking about that, saying, ‘We’ll see you in a week,’ ” said Anne Schleper, the Gophers’ senior defenseman from St. Cloud. “It’s really cool that we can come together and be teammates, and then be competitive the next weekend. It’s a unique situation, but we definitely have fun with it.”

Badgers dominate in recent years
Beginning with the 2005-06 season, when Wisconsin succeeded Minnesota as national champions, the Badgers have had most of the fun in this Western Collegiate Hockey Association rivalry. The teams play four times in the regular season, two at each rink, and often in postseason. Counting the series split in October, the Badgers are 22-6-5 against the Gophers the last seven seasons, including 7-0 in WCHA and NCAA Tournament play.

Minnesota’s national championship total has been stuck on three since the rise of the Badgers under Coach Mark Johnson, the 1980 Olympic “Miracle on Ice” star and the son of iconic coach Badger Bob Johnson. (I know, I know, hockey people know all this, but not everybody who clicks here is a manic puckhead.)

Johnson, who also coached the 2010 women’s U.S. Olympic Team to a silver medal in Vancouver, has done it with a disciplined system mixing players from Wisconsin, Minnesota and Canada, with a sprinkling of Americans from other areas. Olympic goalie Jessie Vetter backstopped the Badgers to their first three titles and one runner-up finish.

This may be hard for some Minnesotans to understand, especially Gopher hockey fans who consider anything short of an NCAA title a disaster, but sometimes the team from across the border is just better than you. That’s been the case here.

However, that doesn’t mean anyone has to like it. Gophers Coach Brad Frost and his players certainly don’t. Forward Jen Schoullis, whose pal and former Shattuck-St. Mary’s School teammate Brianna Decker leads the Badgers in scoring, expressed it as well as anybody this week.

“The past five years I’ve been here, most of the time they’ve been ranked ahead of us,” said Schoullis, who missed the 2009-10 season because of shoulder surgery. “They’re at the top of the castle winning all the games and the most national championships. You look at them and you want to knock them off. It’s been five years now, and that adds to the rivalry, too.

“When we think of Wisconsin, we think of a good team, a team that we want to collapse if we don’t want them to be in first anymore. I think everybody on our team thinks that. The great thing about this team is, we’ve got a chance to do it.”

Frost calls this the deepest team he’s had in his five seasons since succeeding Laura Halldorson. And he reached beyond the state’s borders to find it.

Back when the Gophers were winning national championships, Halldorson recruited almost all Minnesota kids. Her last title team, in 2005, had 17 Minnesotans out of 22 and only one Canadian, freshman Bobbi Ross, later a team captain. 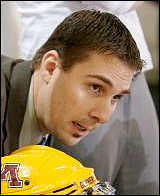 Though Frost, like Halldorson, recruits Minnesota first, six of his top seven scorers come from outside the state. So does his goalie, two-time Finnish Olympian Noora Raty, whose 1.26 goals against average ranks second nationally.

Sophomore Amanda Kessel, younger sister of Maple Leaf forward Phil whose 20 goals put her one off the national lead, is from Wisconsin, while Schoullis (37 points) comes from Erie, Pa. Both played at Shattuck. Junior Megan Bozek of Buffalo Grove, Ill., is the nation’s highest-scoring defenseman with nine goals and 24 points. Colorado product Emily West’s return from a knee injury added to the forward depth; her nine goals rank third on the team. Sarah Erickson (22 points) is the only Minnesotan among the top scorers.

Two years ago, Frost did not think the Minnesota high school senior crop was as strong as usual. So he concentrated his recruiting elsewhere, bringing in Kessel and three Canadians among six signees. All five freshmen this year are from Minnesota, but only half of next year’s incoming six-member class are in-state products.

Flexible recruiting plan
“It just depends how we feel the classes are and how good the players are coming out of those classes,” Frost said. “If they’re good enough to compete and help us win — hopefully, a national championship — then we want to try to keep them at home. And if there are players we feel are a little better fit for us out in Canada or in Europe or other places in the United States, we want to try to get them as well.”

This group — with 15 Minnesotans and nine from elsewhere, including three Canadians and two Finns — offers plenty of fodder for ribbing in and out of the dressing room. 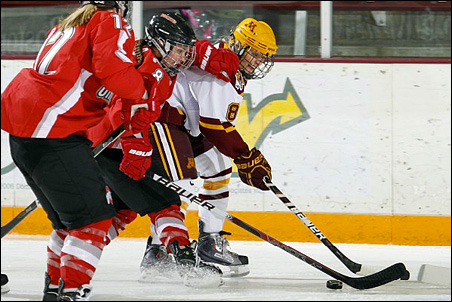 gophersports.com
Sophomore Amanda Kessel, whose 20 goals put her one off the national lead, is from Wisconsin.

“Our Finnish girls, you can tell when they come back from their country, because their English isn’t as fluent as it was when they were with us all year,” said Schleper. “That’s pretty funny. We always make fun of them for how they talk and things like that, and vice versa. Kids from out east or from Canada always make fun of our Minnesotan accent.

“There are a lot of jokes that kind of get bounced around. But we’re all a team, and we’ve got great chemistry, which a lot of teams don’t have, especially when you have people coming from all places. It’s cool that we’re able to joke, but we’re all their together.”

They’ll need it. Minnesota hasn’t beaten Wisconsin more than once in any season since 2004-05, so even one Gopher victory this weekend would show progress. Schleper thinks this team will keep improving instead of leveling off, which hurt in previous seasons, even when the Gophers reached consecutive Frozen Fours in 2009 and 2010.

“Championship teams have that ‘it’ factor,” she said. “And this year, I’m starting to see it and it’s coming along. I really, truly believe we have what it will take to get that national championship. It’s that little bit of extra team chemistry, that little bit of extra camaraderie you have with each other. I really think we have it this year, whereas in years past, I don’t think we had it.”