In 2005, at the request of several trustees, the University of St. Thomas hired an outside consultant to explore the ramifications of leaving NCAA Division III in athletics. This was three years before St. Thomas hired Glenn Caruso away from Macalaster to coach the football team, and well before the Tommies supplanted St. John’s as the football standard-bearer in the Minnesota Intercollegiate Athletic Conference.

Men’s hockey, not football, drove the discussion. At the time, the NCAA permitted schools to play Division I hockey while remaining Division II in everything else, with a Division 1-AA option for football. Athletic director Steve Fritz said the university gave it a long, hard look.

In the end, the prohibitive costs of travel, new facilities to meet upper-division requirements, and athletic scholarships (which are prohibited in Division III) scuttled any thoughts of reclassification. Under one scenario, Fritz said, St. Thomas would have had to drop football and its century-old tradition to keep everything else. Nobody wanted that.

“The option was to be as good as we could be in Division III,” Fritz said. “That set a lot of things in motion for us. The point we were at then, they just really felt Division III fits our philosophy.”

In a week when Maryland and Rutgers bolted the Atlantic Coast Conference and the Big East, respectively, for greater TV money in the Big Ten, that decision by St. Thomas bears re-examination. And celebration.

A small Catholic liberal arts college with an undergraduate enrollment of about 6,500 and a modest endowment, St. Thomas made the right call. The goal of any faith-based institution, Catholic or otherwise, is to form well-rounded, responsible students. Athletics, if done right, can contribute to that. It’s harder to manage when athletics blows up into a revenue-driven monolith available only to the few and the privileged. 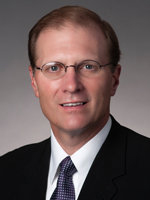 “There’s sort of this toxic mixture of money, public attention, stature and power that can create all sorts of distortion for the institution,” said St. Thomas Executive Vice President Mark Dienhart, the former University of Minnesota athletic director. “When it’s working well, it’s a sight to behold. And it can work. There’s just no guarantee that it will.”

A former Tommies football and track coach as well as an alumnus, Dienhart saw that first-hand in Dinkytown. He returned to St. Thomas in 2001 after losing his job in the aftermath of the Clem Haskins basketball scandal.

“What we’re doing is providing a participatory kind of environment,” Dienhart said. “We’re trying to let the student-athletes benefit from this in a greater way than the institution might. At a Division 1 level, the institution needs to generate huge amounts of money off athletics, and that carries along with it all sorts of stuff.”

St. Thomas officials don’t claim to be any better at this than other M.I.A.C. schools, but Tommie athletes are certainly thriving.

The women’s volleyball team just won the NCAA title. The Tommies have won NCAA team titles in eight sports, tied for second-most in Division III behind Williams College’s nine, and 15 overall. Four have come in the last nine years. Volleyball joined baseball, men’s basketball (coached by Fritz, who then retired) and softball. You get the sense here that no one sport lords itself over the others.

Could football’s recent success change that? The 11-0 Tommies wrapped up their third consecutive M.I.A.C. championship and NCAA bid earlier this month, and will host Elmhurst College (10-1) on Saturday in the second round of the NCAA playoffs.

Caruso’s stunning 54-7 record at St. Thomas leaves him two victories short of tying Frank Deig as the winningest coach in school history. That says something about the ups and downs of football here, and the six-decade dominance of the just-retired John Gagliardi at St. John’s. Deig was the coach the last time the Tommies claimed consecutive M.I.A.C. titles in 1948 and ‘49, before Gagliardi arrived in Collegeville.

Someone unfamiliar with St. Thomas might see the newest buildings flanking O’Shaughnessy Stadium — the Anderson Athletic and Recreation Complex and the Anderson Student Center, built with a $60 million gift from donors Lee and Penny Anderson — and think football drove that.

The gift, the largest single contribution to a Minnesota college or university, launched a $500 million capital campaign that began in 2007. Plus, Dienhart said, the university needed upgraded facilities to attract students who demand the latest amenities, such as the recreation complex’s massive cardio room overlooking the football field.

But football inspired alum Ron Fowler, the chairman of the new San Diego Padres ownership group, to fund a veranda on the east side of the field with three rows of chairback seats as a new revenue stream — the Tommies’ version of skyboxes.

This year, donors paid for a Daktronics video board, the largest in Division III, with living-room quality. The Coon Rapids production company that operates the board also will produce four Tommies winter sports telecasts on Hubbard Broadcasting’s KSTC-TV (Ch. 45); CEO Stanley S. Hubbard is a St. Thomas trustee.

And how many Division III teams broadcast their games on a 50,000-watt AM radio station? WCCO, with its blast-furnace signal, extended its contract with the university for a third season in 2013. There is talk of televising games as well.

Caruso, raised a Catholic in Greenwich, Conn., answered that question by referencing the university’s mission statement, which is posted in the locker room:

Inspired by Catholic intellectual tradition, the University of St. Thomas educates students to be morally responsible leaders who think critically, act wisely, and work skillfully to advance the common good.

“That’s a Division III philosophy,” he said. “And that’s why St. Thomas is a place that I can be at for a long time, and feel very strongly that this is the right place for me.”

St. Thomas, Dienhart said, will never be a place where coaches make more than the top lay executive or the dean of the law school. Barring a massive change of heart by future trustees, St. Thomas alums shouldn’t expect its athletic focus or mission to change, especially in football. Most Catholic schools are out of big-time football anyway. Only Notre Dame and Boston College participate in the Bowl Championship Series (BCS), and just 12 others play in the Football Championship Subdivision (FCS, formerly Division I-AA).

Robert Storie, a senior at the St. John Vianney Seminary on campus who is studying be a Catholic priest, likes St. Thomas football where it is. Storie is one of nine seminarians in Caruso’s Crew, a fan group known for its construction-motif costumes — hard hats and black-T shirts with suspenders — and enormous prop tools fashioned from cardboard and electrical tape. Look for a hammer the size of a smokestack, and you’ll find them. The getups grew from a Caruso inspirational speech about smashing through a brick wall with a hammer.

Football in its proper place

“It’s not just about football,” Storie said at halftime of last week’s 48-17 rout of St. Norbert in the NCAA first round. “It’s about using football to make a well-formed person. People don’t come here because they’re star football players and want to go on to the NFL. This isn’t the be-all and end-all. They’re coming to St. Thomas to get a good education and move on in the world.”

That philosophy runs throughout the M.I.A.C. And that’s why a school like St. Thomas belongs there.

“You don’t jump into Division I to be fodder for a bunch of schools that are trying to make money off guarantee games,” Dienhart said. “You want to be good and you want to be competitive. That’s what our alumni base and our donor base and the people in the community expect.