The Timberwolves’ first West Coast road trip of the 2013-14 season was a night owl’s delight for the fans back home. It was inaugurated by a meteor shower of made baskets en route to a 47-point first-quarter explosion (a franchise scoring record) on Sunday night against the Los Angeles Lakers, and culminated by a gritty comeback from a double-digit fourth-quarter deficit Monday night versus the Los Angeles Clippers that fell two points and two agonizingly close putbacks short of victory.

This pair of highly entertaining games confirmed the mostly positive but also distinctively negative trends that have marked the Wolves season thus far.

The team currently boasts one of the best starting lineups in the NBA, a sublimely complementary quintet that is blending outlandish talent and admirable sweat equity, shiny charisma and disciplined ensemble modesty, to create a spectacle of character and personality that makes it easy — and almost involuntary — to root for their success.

The right mix of starters

You have to begin with the superstar, Kevin Love, who simply has been the best player in the NBA thus far this season. Love is second in scoring (26.4 points per game), first in rebounding (15 boards per game), tied for 24th in assists at five per game, and playing the most effective team and individual defense of his career.

To give you an idea of Love’s distinctive skill set, the next best rebounder among the NBA’s current top-25 in assists is Nicholas Batum with 7.1, less than half Love’s rebounding total per game. Love currently ranks sixth in both made free throws and made three-pointers, a testimonial to his savvy shot selection. His outlet passes have become a magnificent, crowd-pleasing weapon in the Wolves’ offense.

He is the unquestioned leader of this team — the Wolves’ longest-tenured player at the tender age of 25 — and has assumed the mantle with understated aplomb.

The rest of the starters slide into their roles with assembly-line precision. Point guard Ricky Rubio is the aggressive prong of the perimeter defense and somewhat of an unsung hero in the way he has accommodated Love as a co-facilitator in the half-court offense. Nikola Pekovic is the throwback brute, the twirling block of granite who both engenders and benefits from the floor-spacing provided by his low-post scoring prowess and the team’s upgraded three-point shooting.

I was highly skeptical of Saunders’ free-agent signings of both Kevin Martin and Corey Brewer. Put simply, I believed Martin’s shoddy defense would take away more points than his scoring would add, and that Brewer lacked the bulk and discipline to be the wing stopper on defense that was so obviously required after the departure of Andrei Kirilenko. Eight games into the season, the play of K-Mart and Brewer have vindicated Saunders and trumped those reservations.

The mutual trust and camaraderie that exists between Love and Martin is one of the more encouraging aspects of this young season. Love has never had a perimeter scorer as prolific as Martin for a Wolves teammate, and he must certainly recognize a kindred spirit in the way Martin seeks to maximize his offensive efficiency by generating three-pointers and free throws whenever possible.

Meanwhile, Martin knew exactly what he was doing when he lobbied hard for the Wolves to sign him. With Love as a matchup nightmare capable of going inside or outside, Pekovic as a force in the paint, Rubio the passing maestro with the mutant court vision, and his old teacher and coach Rick Adelman choreographing the offense, this team is a custom fit for his scoring talents, which are ideally suited to be a second option but with the freedom to shoot when he sees the opportunity.

Thus far, Martin is enjoying the best season of his 10-year career. He is shooting more frequently than ever before (17.6 shots per 36 minutes) while matching his best true-shooting percentage (which groups field goal, three point and free throw accuracy) from 2007-08 in Sacramento. He has seized on the open spacing and Adelman’s sets to nail a remarkable 55.8 percent of his three-pointers and has scored at least two treys in all but one of the Wolves’ first eight games.

For a team that finished dead last in long-distance accuracy a year ago, is missing injured three-point shooter Chase Budinger, and, even with Martin’s deadeye shooting, currently ranks 18th in three-point percentage, Martin has been enormously valuable.

Then there is Brewer, the spindly sparkplug who has a sado-masochistic relationship with chaos on the court, mucking the game into a ballet of near-pratfalls with his nonstop intensity. Even with Budinger out, Adelman wasn’t positive Brewer should start at small forward, waiting until the day of the season opener to make his decision.

But Brewer has thus far made good on his vow of mature decision-making out on the court. After shooting more frequently and less accurately than any of his nine other teammates on the Denver Nuggets last season, he is jacking up the fewest shots of anyone in the Wolves starting five and converting a career-best 48.2 percent of them. That’s because 49 of Brewer’s 85 shots have come right at the rim, and the bulk of those have either been on long outlet passes from Love or backdoor cuts that are integral to Adelman’s system.

Ball hawks on the perimeter

But even more than his improved shot selection, Brewer’s commitment to defense has made him another off-season coup for Saunders. He has stepped into Kirilenko’s wing-stopper role well enough for the Wolves to continue the defensive strategy that functioned so effectively last season — limit the damage of opponents’ possessions by not fouling, grabbing rebounds and forcing turnovers.

It was a strategy Minnesota executed well enough a year ago to rank 13th in defensive efficiency (fewest points allowed per possession). This year, incredibly enough, they have climbed to fifth, according to Basketball Reference, despite allowing many more offensive rebounds than a season ago (an area where Kirilenko is sorely missed).

But the Wolves’ perimeter defense more than compensates for the team’s lower defensive rebounding percentage. It is a tenacious, ball-hawking element of their style, spearheaded by Rubio and Brewer, although Martin, like Love, has been a pleasant surprise on defense — his 6-7 frame is 5 inches taller than last year’s primary shooting guard, Luke Ridnour. 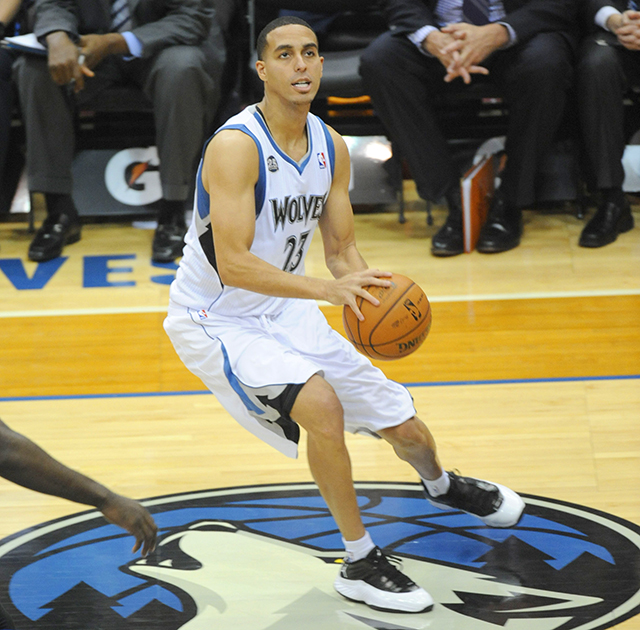 First of all, Minnesota’s 81 steals are the most in the NBA, a major way they have generated a league-leading 150 turnovers by their opponents — obviously the most clearcut way to ensure an empty possession. Second, the Wolves currently rank 9th in lowest opponents’ three-point percentage, permitting just 33.2 percent compared to the league average of 35.8. Anyone who watches the games knows that these stats are mostly a tribute to Rubio — there aren’t a half-dozen point guards better than he is on defense.

But the backbone of Minnesota’s stealth effectiveness on defense is the team-wide absence of shooting fouls (well, except for rookie center Gorgui Dieng). Opponents make fewer free throws per game against the Wolves than any other team, even as Minnesota converts the third-most free throws per game on offense.

The current disparity is plus-81 in made free throws, or an extr 10 points per game. Without that edge, the Wolves would be outscored by four points per game thus far, as they currently rack up 106.3 points per game while permitting 100.3.

Bench goes from bad to worse

That six-point differential also highlights how much the Wolves rely on their starters for success. According to the lineup stats at nba.com, the aforementioned quintet have played together as a unit more than any other starting five—23.9 minutes or almost exactly half the game. During that period, the Wolves outscore their opponents by 8.1 points, which is roughly 12 points per 36 minutes or 16 points per full game.

Beginning with Wednesday night’s game against Dallas, Adelman began sifting in his inferior reserves with the starters, in the hopes of mitigating the dramatic declines that were inevitably occurring when the subs entered the game en masse. I devoted my last column to Minnesota’s woeful bench production so I won’t belabor the issue as much here.

Nevertheless, the abysmal lack of depth is a lodestone on the team’s fortunes moving forward, and the situation isn’t improving. On the tail end of a back-to-back Monday night, Minnesota needed their reserves to step up. Instead, the situation deteriorated the more subs Adelman put on the floor late in the first quarter and early in the second quarter. And when Adelman left his bench crew in an extra minute of two midway through the fourth quarter, the Clippers surged again.

In the end, the plus/minus numbers told the sorry story in stark fashion. In a two-point loss, every one of the Wolves starters was in plus territory and every one of the reserves was a minus (plus/minus measure how the team fares on the scoreboard when that player is in the game). The backcourt of J.J. Barea and Alexey Shved was a combined 1-for-11 shooting.

Shved needs to be benched. Never mentally tough, his confidence and body language advertise his vulnerability in neon, and with Budinger out, opponents know they can exploit the backup shooting guard matchup whenever Shved enters the game. It wasn’t hard to predict that he would be dominated by the Clippers’ Jamal Crawford on Monday, for example.

Whether Shved’s minutes get taken by third-string point guard A.J. Price, rookie swingman Shabazz Muhammad, or someone off the street in free agency, Shved is no longer a viable option. The core of this Wolves team is too solid, too complementary and too promising to endanger its momentum by regularly including Shved as part of the game plan.

In other words, Saunders may need to reach into that magic bag and pull out another wing.

Timberwolves’ starting lineup is one of the best in NBA