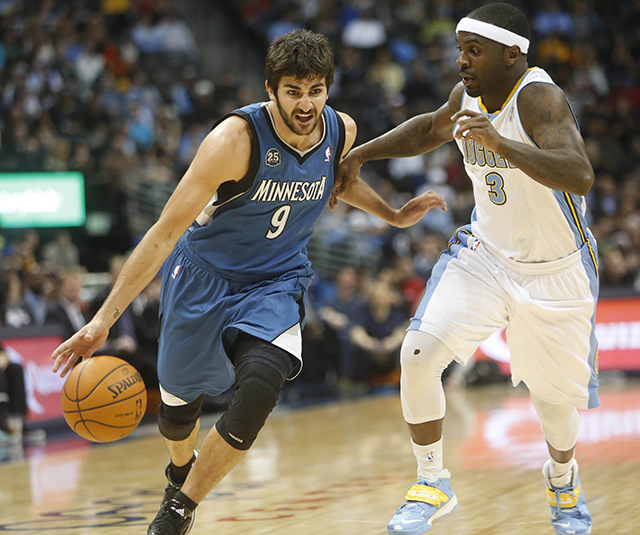 REUTERS/USA Today Sports
The schedule gods are not only smiling on the Wolves lately, they are primping pillows and providing backrubs for the ballclub before it has to go back to the heavy lifting required to overcome the odds and secure a playoff berth.

Remember all the moaning from Minnesota Timberwolves coach Rick Adelman and President of Basketball Operations Flip Saunders about the brutality of the team’s schedule back in the first two months of the season?

Well, suffice to say that you haven’t been, and won’t be, hearing that kind of talk for a while. The schedule gods are not only smiling on the Wolves lately, they are primping pillows and providing backrubs for the ballclub before it has to go back to the heavy lifting required to overcome the odds and secure a playoff berth.

In the three weeks since the Wolves were casually dismantled during an 18-point home loss to the Houston Rockets, circumstances seem to have been rooting for their rebound.

It began with a game against the injury-ravaged Denver Nuggets, which provided Minnesota with a chance to head into the week-long break around the All-Star Game with the taste of victory, ameliorating the odor of their six losses in the previous seven games. The break itself served a number of useful purposes. It provided an extra week of healing for injured starters Nikola Pekovic and Kevin Martin and a respite for the Wolves in having to overcome their absence on the court. It also occasioned a mini-referendum on the leadership capabilities of Kevin Love.

The gathering of all-stars is always a time to simultaneously take stock of where each team in the NBA is headed and generate controversy and speculation about what could or should happen. As a superstar whose request for a five-year contract extension was rebuffed by a team that was subsequently underachieving through the first 50 games of his statistically finest season, Love became the favorite pawn of armchair Machiavellians throughout the media. Any note of dissatisfaction over his current plight or indecision over his near future would have had the NBA “insiders” rapturously rolling around in the catnip of his supposed intentions.

But Love steadfastly refused to feed them. He not only wasn’t disgruntled, he wasn’t coy in his body language or his word choices — there was no way to cast his feedback as code-speak for something else without seeming ridiculous. (Which, of course, didn’t stop some people from being ridiculous.)

Throughout the weekend’s All-Star festivities, Love represented himself as a player fixated on leading his team on an improbable trek to the playoffs, and coming out of the break, he walked that talk like the Steppin Razor in the Peter Tosh song. His 42-point, 16-rebound performance — without Pekovic and Martin, against the NBA’s best defense — in a willpower win over the Indiana Pacers is now an indelible part of the Wolves’ meager lore of non-KG heroics. It was a tone-setting announcement that this particular edition of the Wolves would be playing meaningful games at least into March.

Fun and sun on the road

Love’s prioritizing focus and the win over the Pacers were gusts of goodwill as the team headed out on their longest road trip of the season, a pivotal stretch of five games over an 11-day period. At the time, Minnesota sported a dispiriting 10-16 record away from Target Center. On the other hand, three of the contests — the opening game in Utah, and the closing pair in Sacramento and Denver — were against significantly inferior opponents who had already sacrificed their own playoff hopes.

The Wolves blew an 18-point lead and fell to Portland in the second game of the trip, making the matchup with Phoenix — one of four teams in the West scrapping for the final two playoff spots — pretty much of a must-win. Here again, Love was dominant, piling up 33 points, 13 rebounds and nine assists as the Wolves staged a fourth-quarter comeback to earn the victory.

This is where the schedule-makers provided a timely and invaluable gift. The win over Phoenix happened on a Tuesday night. The Wolves didn’t have to play again until Saturday, and then in Sacramento, just a two-hour plane ride of 750 miles away. That left an interim of three entire days and a leisurely fourth day before travel spent in the desert, away from the relentless, bone-chilling cold in Minnesota.

The coaching staff could plot out a specifically strategic practice regimen not unlike what occurs at training camp, knowing that Pekovic and Martin were both close enough to good health to be integrated back into the rotation. The players could put their work in and then head out to the golf course and the pool. It was the next best thing to a vacation. Coupled with the All-Star break, it meant that everyone but Love had only four games on their schedule over a 16-day span, yet with enough preparation and immersion to be mentally consonant with the coming grind.

Except that, even then, the grind isn’t that arduous for a while. The Wolves did indeed absorb Pek and K-Mart back into the mix and achieved the requisite, if less than dominant, wins to close out a successful 4-1 road trip. Now they return for a four-game homestand that features three patsies nicely sandwiched around a more rugged, but still eminently winnable, matchup with the Toronto Raptors.

Specifically, the Wolves open on Wednesday against a flagrantly dysfunctional New York Knicks team that has lost 13 of its past 15 games, including seven in a row, prompting rampant speculation on when coach Mike Woodson will be fired. After a day off, the Wolves next play the Detroit Pistons, another Eastern Conference also-ran, who has already fired its coach and has lost seven of its last nine games — and one of those two wins was at home against the Knicks on Monday.

The Raptors present a challenge, in that they beat the Wolves in their last meeting in mid-January, are relatively healthy, and hold the third-seed in the East with a record of 33-26, including an admirable 16-14 mark on the road. However they are only 11-12 against the tougher Western Conference and the Wolves should be primed to perform against their first formidable foe in nearly two weeks.

The cherry on top of this homestand is a visit by the Milwaukee Bucks, who own the NBA’s worst record and were beaten 117-95 by the Wolves in their last matchup.

None of these four home games are bunched on back-to-back nights; nor are the team’s succeeding two contests, on the road in Charlotte against the 27-33 Bobcats, and back home against the 21-39 Sacramento Kings.

If the Wolves sweep through this pastry portion of their schedule unscathed, their record will be 36-29. If they slip up once or twice (with the home tilt against Toronto and the visit to Charlotte the most hazardous encounters), that obviously lowers their mark to 35-20 or 34-31. Given the stiff competition in the West, it is not unreasonable to expect the threshold for playoff eligibility to be about 46-36. And looking ahead to the final 17 games of the season, 12-5 seems significantly tougher to accomplish than 10-7. Bottom line, slip-ups in this record-fattening slab of easy games could be fatal.

Nine of the last 17 games are at home. But eight of the 17 are clustered in four back-to-backs and 11 are against opponents with winning records (another is versus the 29-29 Brooklyn Nets). Because so many teams are involved in the battle for the final two or three playoff spots in the West, the need for tie-breakers to determine who makes the post-season is a distinct possibility — and the first tie-breaker is how the tied teams have fared in head-to-head competition.

Thus, games of special importance include March 19 on the road against the Mavericks, whom the Wolves have beaten two out of three thus far; home March 23 versus Phoenix, which will be the rubber match of their three-game season series; and road (March 24) and home (April 2) games against Memphis, where the current series is tied at one win apiece.

To nail down one of these last spots, the Wolves must take care of business against the patsies, post a winning record against the aforementioned closest rivals, and spring an upset of two against the likes of the Spurs, Clippers, or Rockets, or the Heat on the road.

It’s an uphill climb — right now the Wolves are four games behind ninth-place Memphis, and five in back of both Dallas and Phoenix, who are currently the final two playoff qualifiers. But credit the leadership of Kevin Love and the good graces of the schedule-makers for putting this franchise in a position where they can play meaningful games in March for the first time in a decade.

In the next column, we’ll analyze what improvements need to happen on the court for the Wolves to keep their hopes alive.

No excuses left as Wolves play for their playoff lives