When Gov. Tim Walz finished rolling out his plans to spend the state’s record-setting revenue surplus this week, he answered one big question: How much of Minnesota’s $7.75 billion surplus would he ask the Legislature to spend?

Nearly all of it.

All this on top of the two-year budget passed last summer that will spend $52 billion, with nearly half already expended by the time any supplemental budget is passed and signed this spring.

In addition, Walz proposes to spend the remaining $1.1 billion in money sent to the state from the federal American Rescue Plan on bonuses for frontline workers who could not work remotely during the opening months of the pandemic. And he wants to sell bonds to cover $2.7 billion in construction projects.

“This was a budget written by the state of Minnesota, it was written by stakeholders,” Walz said.

Some of what’s in the plan is considered one-time expenditures: $700 million in one-time rebates to taxpayers, and $2.7 billion to refill the state unemployment trust fund and repay the feds for the money it borrowed to cover UI benefits after the fund had been drained.

But a lot of the Walz spending would be embedded into the state operating budget, obligating the state to spend more in the future to keep those programs in place. 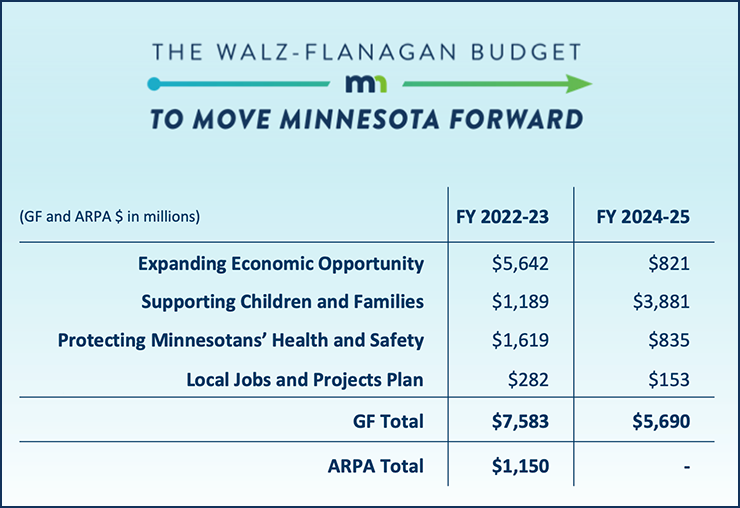 In fact, Walz’s plan would not only spend down the current surplus, but the new spending would also consume the projected surplus for the next two-year budget period, which won’t begin until July 1, 2023, with carry-forward costs estimated to total $5.69 billion. The surplus projected for that upcoming 24-month budget is $5.95 billion.

Walz has the obligation (and the burden) of having to go first — and be specific — when it comes to presenting a supplemental budget proposal to the Legislature. The House DFL and the Senate GOP, meanwhile, have only spoken in generalities and talking points, with some of their proposals containing dollar amounts — and some not.

In presenting their general priorities for the session [PDF] that begins Monday, for instance, Senate GOP leaders assigned no specific dollar amounts to proposals for permanent income tax cuts and funds to recruit and retain police officers.

“We’re still working on those details,” said Senate Majority Leader Jeremy Miller, R-Winona, on Wednesday. “That will be rolled out in the next couple of weeks but you can expect a very large tax relief package.”

Earlier in the week, House Speaker Melissa Hortman said her caucus is only presenting ideas right now and doesn’t feel constrained by the size of the surplus. Numbers will come after the next forecast of revenue made by Minnesota Management and Budget in early March, and only then will various committee chairs be told how much they can spend.

Hortman said it is “really important to start with a conversation about what is really needed in each area and not from a constrained point of view,” where the individual committee chairs have to consider how much other lawmakers think is needed.

Walz, however, has to total up the costs of his plans to the penny. Wednesday’s presentation on public safety included $100 million a year for three years to help cities pay for things like hiring and recruiting police officers, violence intervention efforts and developing alternatives to juvenile detention.

The biggest price tags are assigned to a $700 million taxpayer rebate that the governor calls “Walz Checks” and Senate Republicans termed a “campaign gimmick,” and a proposal to use $2.7 billion in surplus dollars to pay back a $1 billion loan from the federal government and to refill the state’s unemployment insurance trust fund.

The number and expense of new projects makes this supplemental budget produced in the middle of a two-year budget appear like a regular budget plan. James Schowalter, the commissioner of Minnesota Management and Budget said they are usually small adjustments. Wednesday, however, he said he would have to talk “really fast” to go through all of the Walz proposals that consume 12 pages just for the spreadsheet listing their costs.

And it was a surprise revealed in the December forecast that makes it possible. Not only did that forecast reveal the record-setting surplus for this budget, it showed that the positive numbers extend into the next budget as well.

“A four-year planning horizon is especially risky,” Schowalter  said in December. “But at this point, this budget improvement continues throughout the four-year budget horizon.”

Mark Haveman, the executive director of the business-leaning Minnesota Center for Fiscal Excellence, called that “eye-catching.”

“The last five odd-year November forecasts projected either negative structural balances for the out-biennium or modest positive balances that were mostly or completely offset when factoring in inflation,” Haveman wrote this month. “These estimates functioned as a cold shower on any new tax cuts or spending plans with big tails.”