If you’re a person involved in visual art in Minneapolis, you are, to some extent, involved in an ongoing conversation about the 1980s. That goes for people that lived through them, as well as people that did not (me, for example).

The 1980s in Minneapolis were an undeniably remarkable time. Not just for music, which is obvious, but also for the commercial gallery and alternative art scene. It’s always seemed to me that the 1980s are, for better or worse, generally regarded as a sort of yardstick against which all subsequent developments in local art are measured. In fact, not even having lived through it myself, it’s a subject I’ve written a lot about – probably as much or more than I’ve written about the current art scene. Some of the earliest arts writing I did in Minneapolis, for the late, great Art Review & Preview! (often unfortunately confused with the house organ of the American Association of Retired Persons), was about the alternative art scene of the 1980s.

I mention all of this because I read earlier this week that the Loring Park bar and restaurant Nick and Eddie will be closing next Sunday. The strip of buildings on the north side of the park on Harmon Place, where the bar is located, is an area where the weight of this ’80s history has always felt especially present. It was, of course, the location of the famed Loring Café, a favorite of the Minneapolis art cognoscenti of the era. The well-loved Rifle Sport Gallery was located there for a bit toward the end of its life. It remains the location of the studios of one Scott Seekins, famed Minneapolis art-person.

Nick and Eddie wasn’t around during the 1980s, but it always felt like it should have been. It was named, in fact, for a New York City restaurant of that era in SoHo, so spiritually, it’s right at home. Proprietor Doug Anderson had a particularly good collection of artwork on the walls, too, and I wanted to take a last look at them before they (temporarily?) disappear from public view. 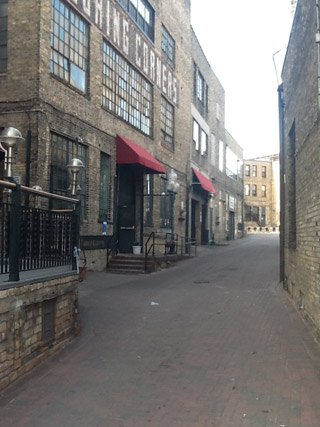 First of all, it’s a gorgeous row of brick industrial buildings, the sort you don’t see enough of around town. Before heading into the restaurant, you should take a moment to walk through the alley off Harmon Place. Minneapolis is a city full of great alleys, and this is possibly the greatest alley of them all. It’s actually very unlike any other alley in the city – not perpendicular to the street, but running off Harmon at an odd angle, rambling through the block and shadowed by the multistory buildings around it. There’s a little addition to the back of Nick and Eddie called the Parish that hosts what’s billed as a “classic gay German cabaret” every Sunday night that feels right at home. In the summer, the crowd at Nick and Eddie often spilled out into the alley, and I have many happy memories of standing back there with a drink in hand, admiring the scene. All the cobblestone and odd angles and brickwork and fire escapes feel particularly metropolitan.

On the back door at 1618 in the alley, there’s a little weathered wooden plaque where someone has hand-painted, in a very eccentric typeface, the name “S.W. Tull Co.” Tull manufactured ball bearings for trucks in the middle of the 20th Century at this address, so this must be the last remnant of the signage. It looks very unofficial, and I wonder if it might have been the work of some long-dead worker at the ball bearing factory who was charged with standing in that same alley and loading up trucks full of ball bearings to be driven to a truck factory and put inside the wheels of other trucks. I am glad to see this little piece of folk design hanging on. 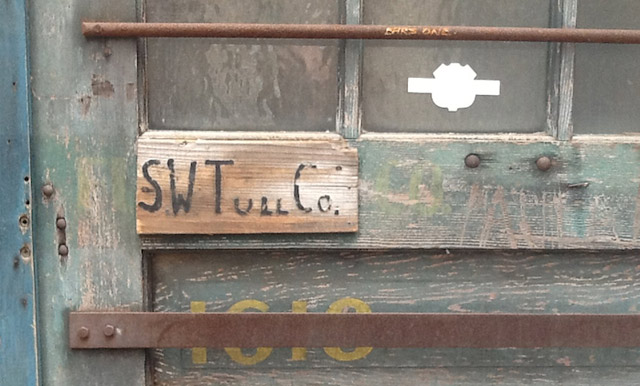 MinnPost photo by Andy SturdevantTruck ball bearings no longer manufactured at this address.

Back around the front, and into the restaurant. One of the centerpieces of the Nick and Eddie collection was, for many years, a painting by Canadian artist James Lahey. It was an enormous skull, painted photo-realistically on a black background. It’s a pretty classic vanitas, the sort of painting that has turned up since the Renaissance to remind viewers of the pretty high likelihood that they, too, someday will die. It’s gone now, so perhaps it’s already made its way to its new home. I always thought it was an ingenious curatorial decision for a bar like this — despite the fact that the classic skull motif has been appropriated by everyone from teenagers to middle-aged guys on motorcycles, it remains the archetypal cool image. But it still says, “Pleasure is temporary. Memento mori, bar patron.” 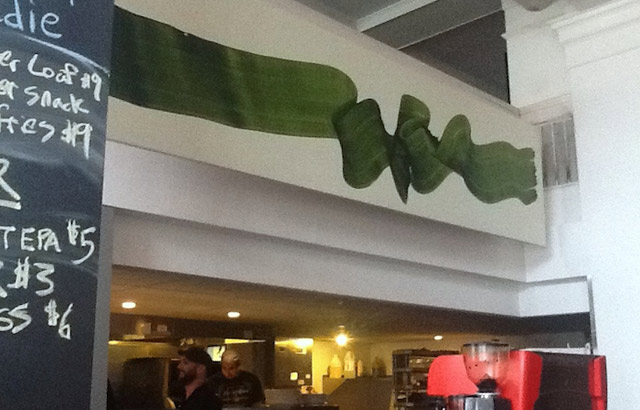 MinnPost photo by Andy SturdevantThis piece that appears to float above the bar at Nick and Eddie is by New York artist James Nares.

Another piece I always admired was a painting hanging over the bar by New York artist James Nares (who, the bartender tells me, also directed an episode of the great 1980s TV program “Fishing With John,” wherein New York musician John Lurie would take luminaries like Dennis Hopper and Jim Jarmusch on a fishing trip, usually with deadpan hilarious results). It’s a long, horizontal canvas, installed over the bar, seeming to float out from the wall. On the canvas is an oversized unbroken green stroke of paint. It looks as if it was made with a squeegee, and has that silken, unbroken effect Gerhard Richter gets in many of his abstract paintings. There is a serene, almost meditative quality one often finds in Japanese calligraphic brush work, which it seems to reference in a very off-hand way.

There are a few pieces by the aforementioned local art celebrity Scott Seekins, as well — it’s three of his Britney Spears-themed paintings. I believe his studio is upstairs, and I am halfway hoping to run into him today to get some perspective on the neighborhood and its relationship with the 1980s. No luck, though. I think I remember idly flipping through a trashy relationship advice paperback at Half-Price Books that counseled, “You will only find that person you’re looking for once you stop looking for them.” Good advice, I guess. 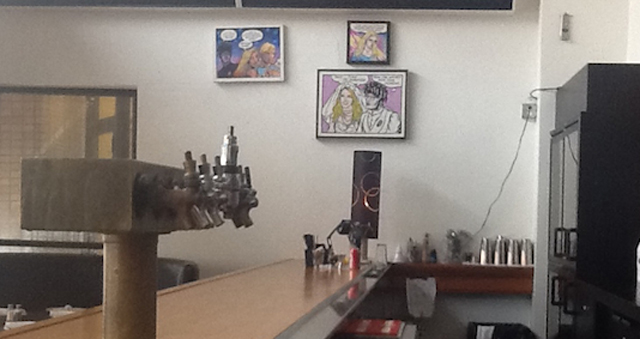 But as I said, lots of people have opinions on the 1980s and their enduring influence around these parts. People on the Internet, for example. Here’s a guy on Yelp, writing about the old Loring Café, formerly a few doors down: “Somewhat of a haven for the cosmopolitan, well-traveled crowd to connect over cocktails and live music from around the world, including New Orleans, Brazil, France, etc. Of course, it was a bit pricey and some of the folks were bourgeois, but these folks are hard to avoid anymore.” Nick and Eddie certainly had that cosmopolitan quality. I think that had little to do with the 1980s, and not much with the live music and the crowd and the cocktails, either – all of which I enjoyed, incidentally. I think it had to do with the simple fact that Nick and Eddie was located in a beautiful building, and there was good original art on the walls. That really goes a long way.

Before it closes, try some 1980s time travel at Loring Park’s Nick and Eddie