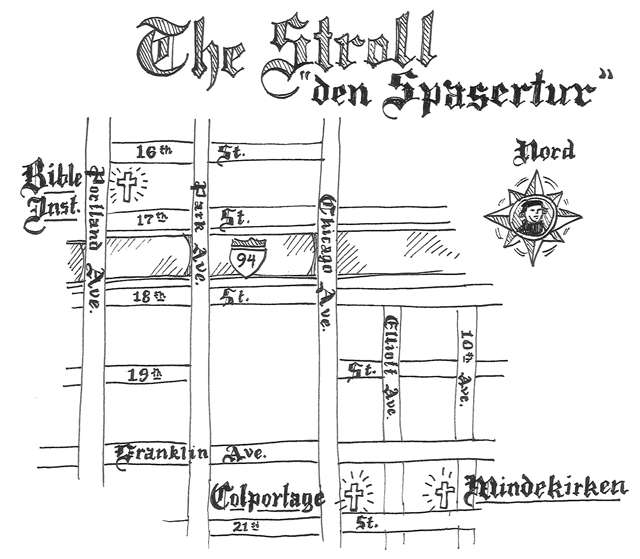 MinnPost illustration by Andy SturdevantNo doubt that 50 years ago, many parts of Minneapolis were very, very Lutheran, and very, very Scandinavian.

Like those of most people who didn’t grow up here — and probably many who did — a lot of my earliest perceptions of what life in this snowy, mysterious northern region of the country must be like were informed by “A Prairie Home Companion,” which my family listened to fairly regularly. I remember being genuinely shocked, in fact, in my first year in Minneapolis that I never seemed to hear people on the street speaking Norwegian.

And while there were a lot of Lutheran churches around, there didn’t seem to be a great deal more than those of other mainline Protestant denominations. There were plenty of Catholic and Orthodox churches, and actually quite a few more synagogues than we had back in Kentucky. This is not to mention the many church buildings for Presbyterians, Unitarians, Methodists, Episcopalians, and non-specifically evangelical congregations, as well as Christian Science reading rooms, Buddhist meditation centers, and lots and lots of mosques.

“Where are all the Scandinavians?” I remember puzzling many times. Besides a much larger than average number of Petersens, Andersens and Olsons in my cell phone contacts, the reality never seemed to quite match the myth.

For example, there are only two places within walking distance of my house where I can buy lefse. It’s much, much easier to find goat meat, burritos, roast duck, banh mi, and other assorted pan-ethnic culinary delicacies nearby than it is to find the sorts of traditionally Scandinavian foods I expected to find on every street corner in my earliest years as a resident.

No doubt that 50 years ago, many parts of Minneapolis were very, very Lutheran, and very, very Scandinavian. Of course, many parts of Greater Minnesota still are. But as far as day-to-day life is concerned, it seems to me that the Lutheran Scandinavian heritage of Minnesota’s self-identity is now only one thread in the city’s larger cultural tapestry.

But there remains a great deal of evidence, especially around South Minneapolis, of where this perception came from. The area was settled heavily by Norwegians, Danes and Swedes throughout the late 19th century and early 20th century, and the religious and cultural institutions they built remain part of the physical landscape. 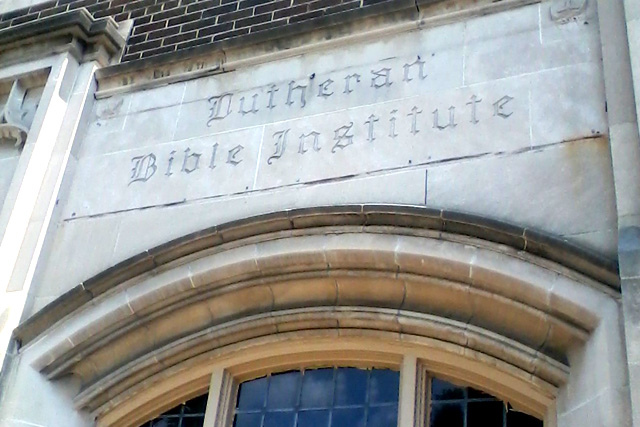 At 16th Street and Portland Avenue, there’s a large, authoritative-looking brick building that, according to the blackletter signage over the front doors, once housed the Lutheran Bible Institute. The school was founded in St. Paul in 1919, and built on this site in 1929. It remained for only about 35 years before moving to Golden Valley in the early ‘60s (along with a lot of other white flighters). The Golden Valley college closed in 1985. The old campus on the Olson Memorial Highway has gone on to play a major role in the artistic life of the Twin Cities: It became the home of the Perpich Center for Arts Education, a public arts high school that has turned out hundreds of the best artists, musicians and performers at work in Minnesota today.

Further south, you’ll come across a bright red painted storefront dominated by a neon white cross. It’s easily one of my favorite storefronts in Minneapolis. I clearly remember seeing it for the first time, years ago, on one of those long, nighttime rides on the 5 bus down Chicago Avenue back to my home in Powderhorn Park. Chicago between downtown and Lake Street is not particularly well-lit, and the glowing white cross stands out from its surroundings in the dramatic sort of way its creators clearly intended it to; the evening I first saw it, the cross was reflecting doubly bright in puddles of melted snow on the sidewalk. Under it were the words “LUTHERAN COLPORTAGE SERVICE,” rendered in red, yellow and orange, in a perfect, mid-century hand by a highly skilled sign-painter who’d very likely ascended to Lutheran heaven at least a few decades before I was born. 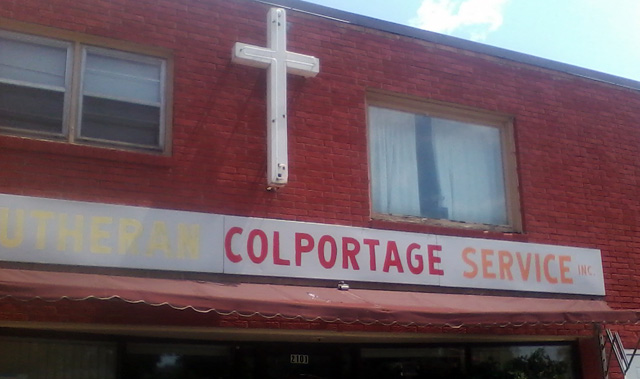 MinnPost photo by Andy SturdevantComing across a storefront offering “colportage” in the middle of Chicago Avenue in the 21st century seems as unlikely as encountering a tallow chandler, shipwright, drysalter, slopseller or ironmonger.

“Colportage”? I grabbed a pen out of my pocket and wrote the word “colportage” on a scrap of paper, because I’d never heard it before.

It turns out that colportage is the distribution and sale of religious publications: tracts, books, pamphlets, and other items like that. It’s a word that’s fallen largely out of use – in fact, you don’t even see the word “tract” in the context of religious publications very often anymore. Coming across a storefront offering “colportage” in the middle of Chicago Avenue in the 21st century seems as unlikely as encountering a tallow chandler, shipwright, drysalter, slopseller or ironmonger. Yet there it is.

As much as I’d admired the building, I’d never actually taken a look inside to see what purpose it was serving. I returned recently to see if there was any chance it was still a warehouse for colportage – I think I was hoping to find stacks of biblical tracts, with titles asking something like “What Do the Lutherans Believe?” typeset in Futura and offset printed images of smiling, blond Max Von Sydow Jesuses, sitting in piles untouched since the 1940s.

While such a treasure trove of printed mid-century ephemera may exist somewhere, it’s not here. An active congregation of non-denominational Protestants now occupies the one-time home of the Lutheran Colportage Service; it looks as if they have worship services several times a week. How long the storefront continues to exist in its current physical configuration is anyone’s guess. Perhaps the congregation in the building now will someday wish to update the signage, which is completely understandable. Maybe I’m too sentimental, but I hope they keep it. To give you a clue of what an outdated term it is, and just how rare it feels to come across it: The publishing arm of the famed Moody Bible Institute of Chicago dropped any reference to colportage in its own name way, way back in 1941. The word was already passé 70 years ago! 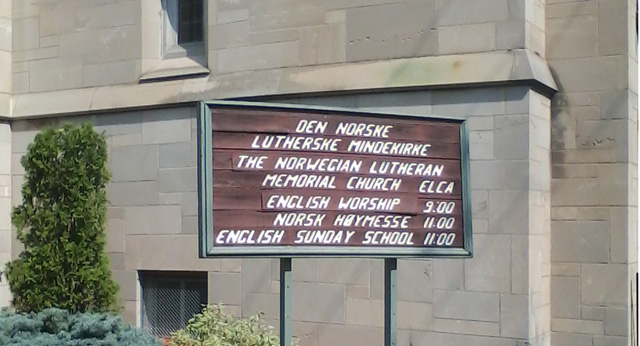 MinnPost photo by Andy SturdevantMindekirken is the only Norwegian-language church in Minneapolis.

Finally, a few blocks east is the Norwegian Lutheran Memorial Church, or Den Norske Lutherske Mindekirken, as it reads in a blackletter over the front entrance, similar to that at the old Lutheran Bible Institute. Mindekirken is the only Norwegian-language church in Minneapolis, with a service every week conducted in the Norwegian language. I happened upon it by accident, in fact – I was biking by from the colportage, looking at churches in the neighborhood, and stopped to have a closer look at this one flying the Norwegian flag. A congregation member was outside gardening, and approached me. Maybe it’s my red beard, but he asked me right away, “Snakker du norsk?” I know enough Norwegian to say, “Oh, no, no, just looking.” 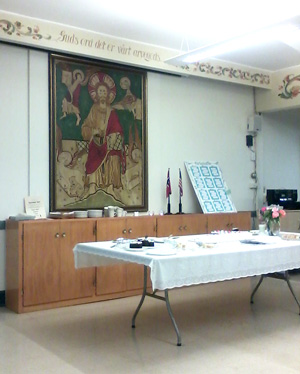 He invited me to come back for a service the next Sunday, so I did indeed return for the Norwegian-language service at 11:00 a.m. The interior sanctuary is beautifully preserved, looking much as it must have in 1929, when it was built – an altar with gorgeous woodwork, and a large-scale oil painting of the resurrection by August Flagstad, a Minneapolis painter who lived and worked on the West Bank (another Scandinavian stronghold), that is based on an altar painting at a church in Molde, Norway.

As noted, I speak no Norwegian, but the rhythms of the language and songs in the service were striking all the same. I imagined this is very much what many parts of this neighborhood must have sounded like a hundred years ago. Keeping an immigrant language and culture alive for nearly a century is a remarkable accomplishment, particularly through those decades where immigrant populations were expected to jettison Old World traditions and assimilate quietly. I was very touched, and even more touched when I was invited to a classic church basement lunch after the service, with coffee, sandwiches and cake, and some friendly conversation with members of the congregation.

The Mindekirken is not simply a memorial to the past, of course, but a living institution – next week, they’re holding a service to commemorate those killed in last year’s attacks in Norway, and they have an active calendar of performances by both American and Scandinavian musicians year-round. There must be a balance between preserving the past and remaining in the present. You can see that balancing act walking through the southside, where old buildings, traditions, languages, artistic works and cultures are constantly in a state of flux, negotiating between the past and present.

(On a closing, semi-related note: I am delighted that “The Stroll” translates so readily into Norwegian — some of you Norwegian speakers can clarify this, but apparently “spasertur” translates literally into “walking trip,” and apparently has the connotation of a pleasant, meandering walk. Is that correct? If so, it’s perfect.)