The area around Lake Street and Hiawatha has changed greatly in the past 50 years, but the train yards in Longfellow that run parallel to Hiawatha, past the towering Archers-Daniel-Midland silos, look very much as they must have 75 years ago. Walking around the yards on a recent Sunday afternoon, alone except for a friend accompanying me, I had a feeling of being completely out of time.

Trains have been pulling in and out of these yards for more than a hundred years, carrying wheat, fuel, and anything else that needed to be transported between Chicago, Canada and the West Coast. They look very much the same now as they must have then, and it’s not hard to start making wild mental calculations about how difficult it might be for you to jump onto one of those boxcars undetected, and how long it would be before you were in California.

Riding the rails strikes some deep nerve in the shared American cultural experience; it’s not entirely inaccurate to note that the modern ideal of the teenager as a roaming, independence-minded outcast was largely created during the Great Depression boxcar boom. All those boxcar kids with dirty clothes and bindles riding the rails helped do a lot of mythmaking. There is still an active, vibrant subculture of train-hoppers, making their way back and forth across America.

The most obvious physical evidence of this culture is train graffiti. Take the Northstar commuter rail past the massive Burlington-Northern-Santa Fe rail yards between Minneapolis and Coon Rapids, or poke around in the rail yards in Longfellow or Northeast, and you’ll come across hundreds upon hundreds of examples. Colorful, larger-than-life train graffiti can be found on nearly every car.

(Of course, MinnPost’s readers being uniformly upstanding, law-abiding citizens, I should not have to mention here that the many, many illegal activities recounted in this piece — graffiti, train-hopping, wandering around rail yards — do not represent the views of this fine organization.)

This type of graffiti has a long, strange, and thoroughly American lineage. The first markings to appear on boxcars were made with chalk and pencil by railroad workers, noting arrival and departure times, weights, and other information about the car’s contents for the benefit of their colleagues in distant cities that would be unloading them. As Woody Guthrie-style rail riding became a popular, illicit way for people to travel cheaply across long distances in the early part of the 20th century, a whole taxonomy of hobo markings began to appear on the sides of these boxcars – like the railroad workers’ markings, these were cryptic notations meant for a specific, in-the-know audience. (In 2010, the Walker Art Center screened Bill Daniels’ film “Who is Bozo Texino?” — one of the best examinations of this phenomenon and required viewing for anyone interested in this history.) 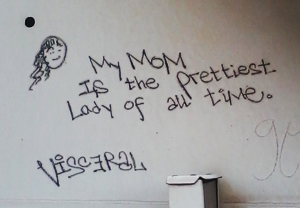 Decades later, in 1970s-era New York City, kids in the Bronx associated with the nascent hip-hop subculture began spray-painting the sides of subway cars, turning the city’s transit system into a rolling museum of outsider art (covered from both the pro- and anti-graffiti perspectives in the great 1983 film “Style Wars”).

Over the last 30 years, these disparate styles – intimate, rural hobo markings and bold, colorful urban spray-painted vistas – have fused into a contemporary style that seems to draw equally from each tradition. The sides of train cars today run the gamut, from sloppy gang-style tags and idle signatures to line drawings, stenciled imagery, and enormously complex color fields. These markings are meant to be examined in close quarters, or viewed from long distances. They are both widely accessible to anyone who might happen see a train roll by, and completely impenetrable to anyone not knowledgeable of the subculture.

One can find boasts, hastily scribbled epigrams, social commentary, threats, jokes, names, notations of date and location, and formal displays of lettering proficiency. It’s an endlessly evolving conversation, with work commenting on other work nearby, brighter letters written atop faded letters, and with callbacks to other artists. It’s difficult to know how much of the work originates here, and how much was created in distant cities and is simply passing through Minneapolis on its way elsewhere, seen already by viewers hundreds of miles away. It’s hard to know when the work was created – years ago, months ago, days ago? It’s a jumble of symbolism, styles, and intentions that feels like it’s both completely ephemeral and like it’s drawing on an old tradition. It seems to spring from a secret history that’s never been completely recorded and probably never will be. 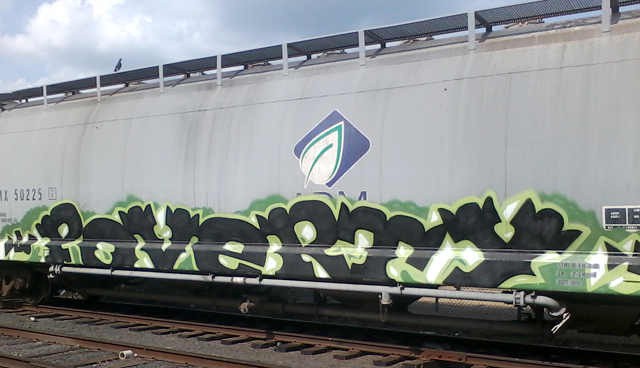 It’s a very complex feeling. It’s hard to see the work and not admire the bravado and technical skill, and also feel bad for the railroader workers who have to powerwash it all off so the car’s official markings are legible.

I can’t pretend to have any great knowledge of the names spray-painted and marked on the sides of the boxcars I photographed in Longfellow. As in any subculture, the artists here undoubtedly have hundreds of admirers who know the intimate details of their work, even as the artists remain invisible to the mass culture. But you don’t have to know the biographic details to appreciate the handles – Sluto, Agono, Bum Nixon, Franco, Maple Spring, Wooden Axle, the Graf Hick Krew, and a “Conrail Twitty,” whose death is memorialized in one poignant graffito. These names wittily evoke the last 75 years of American subculture, drawing a fairly direct line from hobos to hip-hop. 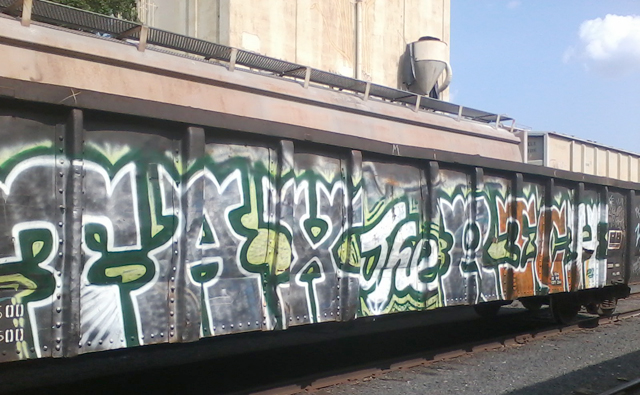 A few of the pieces I see are worth pointing out. The most striking work is on two cars by an artist whose handle I didn’t see. One reads “TAX THE RICH,” and the other, simply “POVERTY” (there are two additional smaller notations on this last one: “$$ for war / But no more for the poor”). They’re bold pieces, meant to be seen from a distance and with political implications easily grasped by the viewer. I notice the artist left the train’s identification number clear in both pieces. I wonder if there’s a code among these artists to leave critical information uncovered, or if this has been removed after the fact. Up close, one can see in the slashes of the spray paint that the lettering was executed quite rapidly, but from a distance it looks seamless. It’s the populist economic philosophy of our time, as surely as it was the populist economic philosophy of the Great Depression. The continuity is striking. 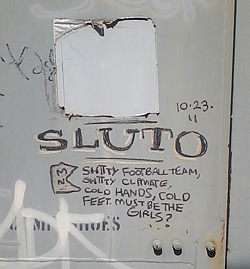 Not all the work is topical (or as accomplished). Most of it is best described as offhand, lightly surreal non-sequiters. Sluto draws an outline of the state, with this rationale for living here: “Shitty football team, shitty climate, cold hands, cold feet. Must be the girls?” Agono whines (or threatens?), “Love I don’t get none, that’s why I’m so hostile to the kids that get some.” Visceral makes the mysterious, quasi-Oedipal assertion that “my mom is the prettiest lady of all time,” alongside a crude sketch of the pretty mom in question, smiling pleasantly.

Like any collection of artwork, it’s all over the map (literally, in this case). Some of it is dumb, some is very poignant and even touching. Some is terribly ugly or lazy, and some is wildly ambitious and imaginative. Taken as a whole, it depicts the mass consciousness of a fluid subculture moving endlessly within a sprawling nation of far-flung borders. It’s a subculture that can seem both crass and possessing a highly refined aesthetic. It seems always on the move, and always looking to catch the next train out of town.