Last week at the conference of the American Geophysical Union, this new, high-resolution image of the United States at night was released. Taken from NASA’s Suomi NPP satellite, the images show the country as it appears at night from space with a remarkable degree of clarity. As with any map of the U.S., your eyes probably drift inevitably to home, and there it is: tucked halfway between the lights of Chicagoland clustered around Lake Michigan and an eerie patch of luminosity created by the oil fields in western North Dakota, there’s the little spiral where we live. You can trace 94 and 35 off of the core by following the little pockets of light that dot the interstates between Fargo, Duluth, Madison and Des Moines. The Twin Cities are the last sizable cluster of light before the largely darkened western interior. In most directions out from the cities, there are gradually larger and larger swaths of darkness.

It’s an inverse of how the night sky looks from the ground. The lighter the area is on the map, of course, the harder it is to make out the sky from down there. Stargazing is great out in those darker patches, in these furthest reaches of the state. In a place like the Boundary Waters, you can find yourself in complete darkness. In the farthest parts of the north, not only can you clearly make out the Milky Way, but the aurora borealis as well. There is a lot to see in the night sky.

Or so I’ve heard. The fact is – and this is something I’ve cheerfully admitted to you here before – that I actually don’t make it out of the core cities very often. I’m too tethered to bus lines, taco trucks, wi-fi and art museum public programming. While there are some excellent resources around Minneapolis and St. Paul for dedicated stargazers and amateur astronomers (some of which are listed here), for the most part, your view of the night sky – even from darkest stretches of city streets or urban parks – is pretty limited by light pollution from streetlights, buildings, houses, cars, and parking lots.

While it’s limited, this isn’t to say that living in the city must completely deprive you of the pleasures of stargazing; you just have a smaller palette to work with. Identifying a whole sky’s worth of twinkling stars is potentially quite a difficult task, but there’s no reason you couldn’t learn to correctly identify the scaled-back handful of stars that are visible from city streets. Why shouldn’t citydwellers have a map of the night sky that only highlights what’s visible to them?

The stars themselves fall somewhat outside the scope of this column’s interest in material culture, but in these winter months, the material culture is mostly covered in snow. The skies can be quite clear on good nights, and the darkness and silence reward heavenly contemplation. This week, I present the second in a series of field guides to the skies of Minneapolis and St. Paul. Last week, it was airplanes. This week, it’s stars.

These four maps, created in ink and watercolor, show each quadrant of the sky in the winter – specifically, I’ve tried to place them as close to tonight, Dec. 12 as possible. It’s how the sky appears at around 11 p.m. I’ve included only stars of the brightest magnitude, the ones that break through the light pollution and the haze. It’s entirely likely I’ve missed a few, but for the most part, these will be among the brightest objects in the winter sky this time of year if you’re out for a late-night stroll anywhere within the inside boundaries of 494. 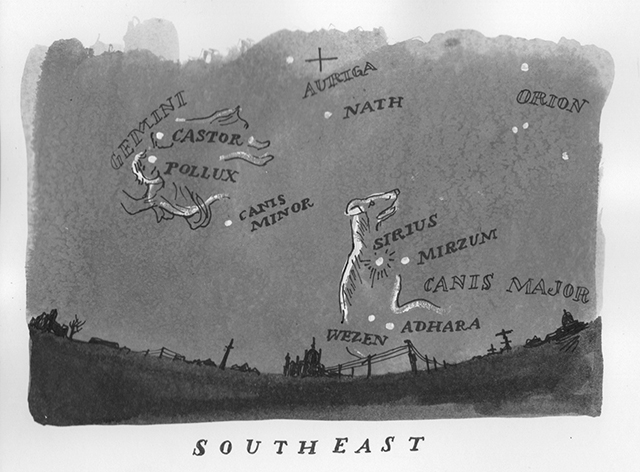 Starting in the southeast, one finds the brightest star in the sky, Sirius, part of the Canis Major constellation. (I’ve included the full constellations in these maps, though many parts of these heavenly bodies will probably be missing key points, like a connect-the-dots on the back of a children’s menu half-completed by a very lazy child.) Sirius makes its way back into the sky in late November, and is more than twice as bright as any other star in the sky. This time of year it’s quite low in the sky, so it may be blocked by buildings, trees, light posts or statues of unusually tall individuals, but it’s fairly hard to miss if you’ve got an unobstructed view of the whole sky. You may be able to make out some of the other stars in Canis Major, such Mirzum, Wezen and Adhara. Further up, you may also be able to make our Castor and Pollux, the twins that give the Gemini constellation its name. 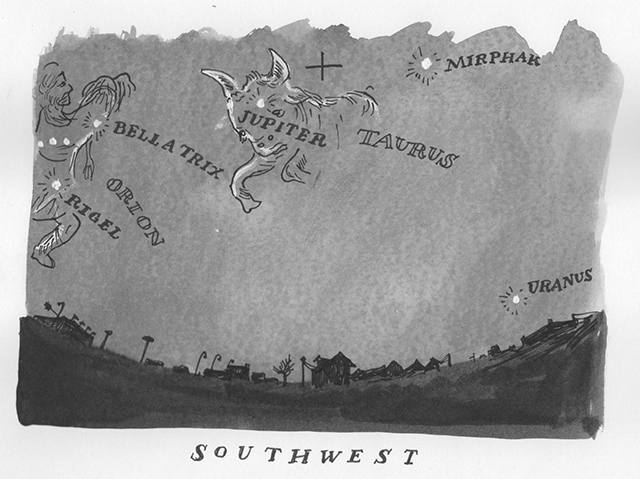 In the southwest quadrant, you can make out the two planets in our solar system visible at this time of night, Jupiter (within the constellation of Taurus) and Uranus. High up in the sky you may also find Mirphak, alternately known as Alpha Persei or Algenib, a star that is only visible to those of us living in northern latitudes. Imagine a smug, frosty camaraderie with your fellow L.L. Bean-clad stargazing compatriots in the great northern cities like Detroit, Boston, Montreal, Toronto, Milwaukee, Burlington, Winnipeg, Bangor and Calgary. 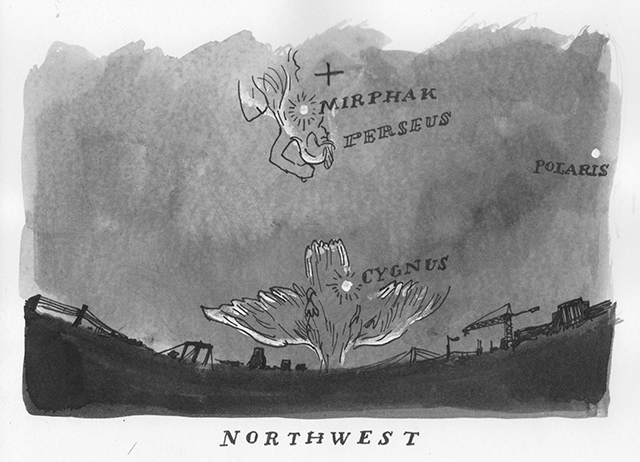 In the northwest quadrant, Mirphak remains visible. Closer to the horizon, you may find Deneb, the brightest star in the constellation Cygnus (mislabeled on this otherwise delicately rendered map — oops). Most of the stars in this part of the sky are not bright enough to be seen from the city on all but the darkest, clearest nights. If you could make out the other points here, you’d see the asterism known as the northern cross. In the center of the sky directly to the north, of course, is Polaris, or the North Star, the heavenly body that gives our state its nickname and motto: the North Star State and l’etoile du nord. Polaris’ other names – the Guide Star, the Lode Star, the Pole Star – give a sense for how important it’s been historically for navigation, and, by logical extension, a symbol of consistency and unerring trueness. 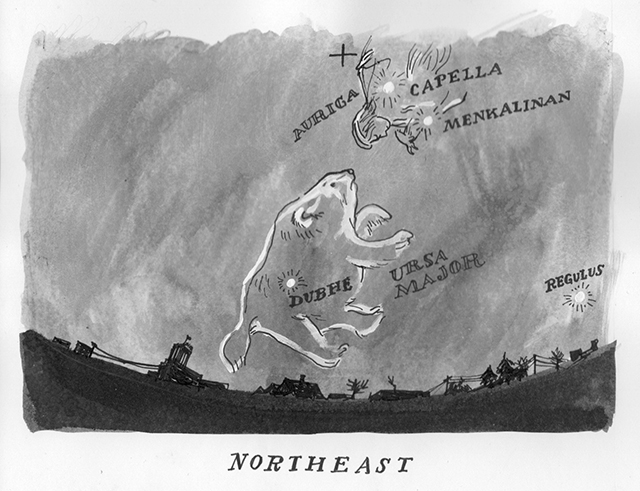 Lastly, in the northeast quadrant, the Auriga constellation is highest in the sky; its most visible star is Capella, a binary star system located a mere 42 light years from Earth. Lower in the horizon there is Dubhe, the brightest star in Ursa Major, a well-known constellation that is nonetheless not greatly visible from the city. Regulus, another one of the brightest stars in the night sky, also lies close to the horizon in the eastern part of the sky.

So there it is. You’re set on the visible airplanes and stars of the Twin Cities. Reluctantly, we’ll return to the earth next week.

Chat live with Andy Sturdevant at noon on Wednesday, December 19! Head to minnpost.com/chats for details.

The winter sky: Even in the city, stargazing can be rewarding