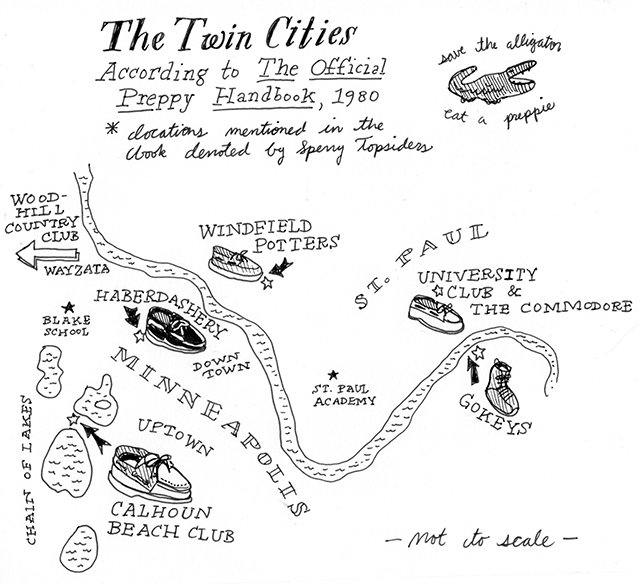 MinnPost illustration by Andy Sturdevant
Parts of the metro area certainly fit snugly into the larger scheme of preppy things.

“Look, Muffy,” the front cover beams. “A book for us.” (Muffy is, of course, a classic preppy nickname, like Bunny, Tiffy, Corkie, Win, Bif, Skip or Bink.) Inside is “the first guide to The Tradition,” covering “Mannerisms, Etiquette, Dress Codes, the Family,” and “the Right Nickname” for anyone with aspirations to dress as, act like, and cavort with Old Money, private school-educated Eastern Seaboard yachting types.

It’s a meticulous guide to the ins-and-outs of a particular American subculture known to anyone who has spent any time around people with money, whether in the East, or here in the Midwest. The book so expertly captures the aesthetic, mindset and details of the Preppy that it’s been imitated endlessly since then (some of you may remember the equally influential “Hipster Handbook,” circa 2001). Decades of imitations dilute the effect of the book 30 years later; however, it still remains a funny, potent and razor-sharp portrait of a particular subculture in time.

Preppyism was (is? We’ll get to that in a moment) mostly an East Coast phenomenon, centered around New England and New York City, but it was (is?) prevalent in any American community with wealth going back two or three generations. The first time I read it, I was delighted to come across so many Minnesota-specific references. Minneapolis and St. Paul were originally settled by WASPs with roots in elite New England culture, and to some extent, the power structure in the state still reflects that (for example: Gov. Mark Dayton, Blake ’65, Yale ’69; Mayor R.T. Rybak, Breck ’74, Boston College ‘78). So parts of the metro area certainly fit snugly into the larger scheme of preppy things. 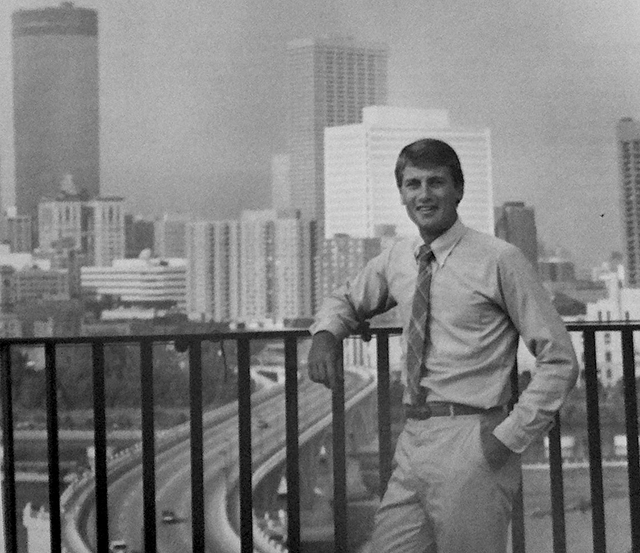 I thought it’d be enjoyable to stroll around some of the locations specifically mentioned in the book, and see what remained. For the sake of convenience, I stuck to St. Paul, which has a few Izod-era preppy hot spots clustered around Cathedral Hill, a neighborhood that remains one of the toniest in the Twin Cities. I should tip my strawboater here to Rebecca Collins, a blogger who wrote on this very subject in 2011 — I found her blog post while doing the initial research for this piece, so I’ll try not to duplicate her efforts too closely. She has a nice roundup of the now-defunct Minneapolis locations: the St. Anthony-area restaurant Winfield Potters (misidentified in “The Handbook” as “Windfield Potters”), described as a place where the “help is required to wear Weejuns, khakis and Lacostes”; the Haberdashery, a downtown Minneapolis clothier and bar; and the Calhoun Beach Club, a place where “upwardly mobile lawyers, etc., play tennis, squash and swim. … Since no golf, members mostly 25-40.” The Calhoun Beach Club is still around, and as far as I know, this description seems to fit the bill pretty well.

Another location mentioned was the Woodhill Country Club in Wayzata — of all the locations mentioned here, this is the one I am the most certain I’d be kicked out of, as it is — in the words of “The Handbook” — the “highest proportion of real preppies in the area.” Wayzata and Edina both get shout-outs in the chapter on prep-approved suburbs (“You’re almost thirty now. So it’s time to settle down. So you’ll sell the two-bedroom condominium and buy a house in the suburbs”). Maybe later this year I’ll attempt a Stroll of the most exclusive country clubs of the west metro. Sticking to St. Paul and the old line preppy institutions there, though, I am happy to report that I was not kicked out of the University Club, despite the fact that 1.) I am not a member and 2.) I went in on a Monday, when the club is closed. The University Club is one of the true wonders of St. Paul — a cozy, overstuffed refuge with an amazing view of downtown St. Paul and the river. From the sound of “The Handbook,” the University Club was in bad shape at the dawn of the 1980s — it’s described as “fallen on hard times” and being “discreetly open to the public, for lunch [and] dinner.” It is now once again a private club, but I was able to take a quick walk around the first floor (and, actually, look into the membership requirements — it’s not anywhere near as expensive as I’d imagined).

The interior is unmistakably posh, replete with dark wood fixtures, fireplaces, leather-bound books and white tablecloths. It’s posh, for sure, but not in a sterile, affected way. Prep, one gathers from “The Handbook,” is a surprisingly subtle thing: It’s not at all ostentatious, but is in fact very matter-of-fact, snug and unhurried. There are a strict set of rules, like in any subculture, but once you learn to operate within those parameters, prep is a pretty easygoing affair. The main thing, above all, is continuity. The club feels lived in, the kind of place where you might meet your parents or grandparents. It’s very clean, but not particularly tidy, in the way a private home is often not perfectly tidy. The walls are dotted with photos of members from the past. There are even photos of — and how is this for layer-upon-layer? — members from earlier historic eras dressed in the fashion of even earlier historic eras. The sense you get sitting in the University Club is that you are a part of something that goes way, way back. Much further back than most things in these often historically amnesiac Twin Cities. That seems to me to be one of the keys to true Prep. Another St. Paul hot spot mentioned is not a club or restaurant, but an institution that makes the list of “where to shop” in “The Handbook.” They’re now gone, so I didn’t attempt to see them in person, but the Gokeys clothing empire was a longtime St. Paul fixture. There was a retail outlet located in downtown St. Paul at 21 W. Fifth St. (at St. Peter) until 1992, and a mail order warehouse located at 84 South Wabasha Street in St. Paul, on the south bank of the Mississippi River across from downtown. Gokeys sold the sort of outdoor clothing that preppies favored for casual wear, and did a great deal of business via mail order. “The Handbook” singles out Gokeys’ “high-quality Harris tweeds, sweaters, corduroy and hunting gear,” along with a “down comforter with the duck-and-pond print cover – a classic!”

Gokeys was purchased by the Vermont-based Orvis Company at some point in the waning years of the 20th century. Orvis left the Twin Cities market in the early 1990s, but still sells Gokey-branded footwear. Preppyism comes from New England originally, and here, it is inevitably swallowed back up by New England again.

Next on the itinerary is the Commodore, located in an old hotel refurbished as condos a few blocks up Western. The Commodore is, of course, the most legendary art deco bar in the Twin Cities. “F. Scott himself used to frequent the place,” “The Handbook” points out. “Need we say more?” (Fitzgerald, of course, is the only Minnesotan named in chapter entitled “The Prep Pantheon.” The only other two that come anywhere close to having the most tenuous local connections are Anne Morrow Lindbergh, the wife of pilot Charles Jr. and daughter-in-law of 6th District Rep. Charles Sr., and cartoonist Garretson Beekman “Garry” Trudeau, whose Yale roommate, Charles Pillsbury of the Minneapolis Pillsburys, lent “Doonesbury” part of his last name. Pretty slim pickings!) MinnPost photo by Andy Sturdevant
The Commodore is closed to the public.

The Commodore is closed to the public, and has been for some time. Up until a few years ago, they used to have open houses once a month, but that’s not even an option now. There have been rumors circulating for a while that it’s going to reopen soon, but until that happens, you’ll just have to use your imagination.

Last is W.A. Frost, the bar and restaurant at Western and Selby described in the “The Handbook” as “St. Paul’s bid for acceptance. Proto-Prep. Pickups.” Frost is owned by the same concern that also operates the University Club and the Commodore, and the interior aesthetic is very similar: cozy, heavy on the exposed brick and dark wood, and dimly lit. It looks very unchanged since it opened in 1975, and it’s not hard to imagine the L.L. Bean and Nantucket Red-clad scions of the St. Paul elite cruising each other at the bar in the early 1980s. The vibe is still quasi-professional and vaguely well-to-do, but the look has changed. While I sit and drink a Manhattan, I observe the group of mostly male young professionals at the end of the bar. They probably could have been preps in another time, and polo knit shirts will always be in style for a certain segment of the population, but the tacky frosted denim, Hollister fleeces (Northern California is not preppy), ear gauges and chin straps of the modern bro set them pretty outside the aesthetic parameters of the classic Prep.

Part of the joke of the original Handbook is that, at the dawn of the Reagan years, Americans from all socioeconomic backgrounds were striving to look like Old Money. It’s a feat not that difficult if you knew a few basic secrets, and one that quite a few managed to pull off. This isn’t the case anymore — the truly wealthy are still out there, and they have their own microcosms, but it’s simply no longer fashionable for the wealthy (or the non-wealthy) to dress, act and talk like they just stepped out of a Jeep Wagoneer and into a yacht in Martha’s Vineyard. Reading “The Handbook” 30 years later, you’re just grateful that someone was paying close enough attention to get the juiciest details while they could.

Correction: This version corrects information about Gokeys and the retail establishment’s downtown St. Paul location. Thanks to Steven for the information.