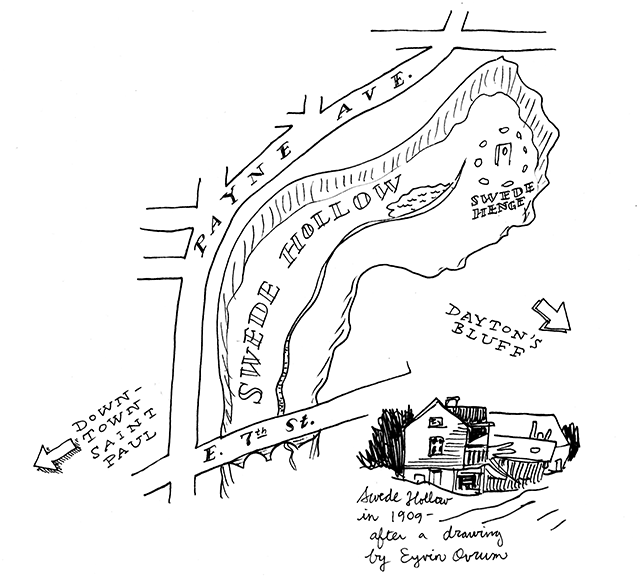 MinnPost illustration by Andy Sturdevant
Circling the perimeter from 7th Street and looking down, the sides of the ravine are so steep there appears to be no way down other than falling in.

Swede Hollow is another one of those places around the cities that are probably more enjoyable to romanticize retrospectively than it might have been to visit in its heyday. It’s an almost subterranean ravine set well below the city, just near downtown St. Paul, that was only accessible via one tunnel for a whole century.

Circling the perimeter from 7th Street and looking down, the sides of the ravine are so steep there appears to be no way down other than falling in. Within this secluded world there was a shantytown immigrant community from the 1850s through the 1950s – first Swedes and Poles, then Italians, then Mexicans. As appealing as a secluded urban village sounds, it was a tough place. No electricity, no sewage, no city services, no building code enforcement. Just shanties, made with scrapped materials, and a few hundred residents.

Walking there from downtown St. Paul (and 7th Street between there and Phalen Avenue is one of those stretches of the cities so dominated by vehicular traffic that most of the looks you get on foot from motorists range from pity to confusion), the change in the noise level of the surroundings is remarkable once you set foot in the hollow. You can now enter through the remarkable Seventh Street Improvement Arches from the Bruce Vento Nature Sanctuary, and once you’re in there, the roar of the interstates and major arterial streets is almost silenced. Swede Hollow is actively used by its neighborhood – I came across some older women foraging, as well as some teenagers on BMX bikes – but it’s a quiet, secluded recreational spot.

The seclusion is a natural consequence of geography, but it probably was not always as quiet or as recreational as it is today. The neighborhood peaked at about 1,000 residents at the turn of the century, and by the late 1950s, there were still about a dozen families living in there, living very much as settlers in the 19th century would have. The city was shocked – shocked! – to find a pocket of such wild atavism within city limits, and so the remaining families were evicted in 1956, and the remaining structures were burnt to the ground. Swede Hollow was a marginal space for a few years, until the 1970s, when it was recreated as the lovely, green park it is today.

In some ways, the story of Swede Hollow seems roughly analogous to the Gateway District on the other side of the river in Minneapolis. An improvised, unregulated, and marginal community built bit-by-bit over many decades, and then blotted out with one pretty quick gesture by the city in the interest of postwar civic improvement. As with the Gateway, there is a sense of ambiguity thinking about it now: Were the lives of the people in Swede Hollow tough? Unquestionably yes, as it was certainly one of the worst areas in the Twin Cities to live, in terms of modern conveniences. The stream that ran through the basin was both a source of drinking water and its sewer. The buildings were makeshift and likely unsafe. As noted, there was nothing in the way of city services, extending even to electrification. It was, essentially, a 19th-century slum cut off from the city well into the 20th century.

But was there also something lost in erasing the community so completely, a place that had been the first stop for several waves of St. Paul-bound immigrants and that had its own culture and traditions and sense of place? Again, an unquestionable yes. Walking through the area recently, I wanted to find evidence of that neighborhood that remained. Much of the area is now densely wooded, especially in the lower reaches of the basin. However, one notices the trees aren’t particularly thick or tall – it’s not old-growth forest. The forest that’s developed here is only about 50 years old, which is just new enough to look underneath and see vestiges of what that forest covered.

And there are little bits of the old Swede Hollow poking through here and there. The city’s demolition of the neighborhood as a residential era was quite thorough, but it’s hard to completely erase human traces that peek through the quiet, bucolic park on top. On the western slope of the ravine, there are countless bits of brick structures and rusted metal on the side of the hill – what looks as though it might have been a roof, or a chimney, or something else. I found a lot of odd, rusted metal bits around. It’s difficult to say if what you’re seeing is the result of illegal dumping since the end of the Swede Hollow residential community (the fact that the ravine made a good garbage chute for less conscientious residents of the neighborhoods overhead was another source of problems for the original community), or some vestiges left over from that era. The presence of so many bricks and building materials scattered on the edges of the park suggests it may be a little of both. MinnPost photo by Andy Sturdevant
It’s difficult to say if what you’re seeing is the result of illegal dumping since the end of the Swede Hollow residential community or some vestiges left over from that era.

In the center of the park, off the bicycle and pedestrian trail, there are  remnants of a wooden staircase leading to the bottom of the basin. Here it’s easiest to get a sense of the neighborhood that might have once been here. The stairway – possibly a country cousin to some of the stairways we visited a few weeks ago in St. Paul – is unmaintained and mostly grown over, but there are still brick pavers in the ground, and vestiges of what could be foundational structures nearby. The path it cuts is a narrow one, and it’s not hard to imagine it being surrounded on all sides not by trees but by brick and wooden shanties. You can see the faintest traces of the footprints these houses might have had. It’s not hard to imagine voices coming through the walls, speaking Swedish and Italian, with sounds of the kitchen and of children running underfoot. Further down, there are a few remaining foundations, barely visible. MinnPost photo by Andy Sturdevant
The stairway is unmaintained and mostly grown over, but there are still brick pavers in the ground, and vestiges of what could be foundational structures nearby.

At the north end of the park, with the Hamms’ Brewery looming over it, there is an assemblage of stones, arranged in a circle – I started referring to it as “Swedehenge.” Some of the stones appear to be decorative, but a few, including the fencepost-like shape in the center, appear to have had some functional use at one time. Swedehenge sits on a mound, circled by pedestrian paths. I’m not sure where it came from, because there were no didactics or wayfaring signage around, explaining the significance of these stones or the identity of their creators. I found later it was the work of artist Christine Baeumler, and the work is, in fact, called Swede Hollow Henge. MinnPost photo by Andy Sturdevant
I started referring to it as “Swedehenge.”

I initially imagined that Baeumler’s work might be an unofficial monument, erected by unknown parties. Baeumler is a much-celebrated artist that’s been working with social engagement and environmental restoration for many years, and this work fits comfortably into that practice. However, I love the mystery and ambiguity around the piece. I like the fact that it’s not marked, and is allowed to exist without signage or markers, for people to encounter and interpret however they will. Is it an artifact? Artwork? Something else? Swede Hollow was a neighborhood carved out of the wild and held together for over a century by little more than improvisation, necessity and willpower. It probably wasn’t a lot of fun to live there, but it was home to thousands. This mysterious little civic monument to these now-anonymous people that called the neighborhood home for a century is a beautiful reflection of that.

This piece has been updated with information about Christine Baeumler’s Swede Hollow Henge.

Exploring Swede Hollow, once a neighborhood carved out of the wild