Ah, the grid. The first thing you see from an airplane, flying into MSP: a city sitting among lakes and river, perfectly carved out into rectangular little parcels of land. That grid is how, if you live in Minneapolis, you know you’re home.

Finding the few corners of Minneapolis that somehow evaded this rigidly enforced alphanumerical tidiness, whether as a consequence of history, real estate, or quirk of planning, is always worth exploring. Most of them – Tangletown or the Hillside Avenue section of North Minneapolis, for example – came about because they’d predated the city’s platting. There’s one neighborhood in Longfellow, though, that was developed long after the surrounding area. Like Tangletown, it stands out on a map: squiggly and fluid where most everything else is straight and geometric.

Back in 1857, a large parcel of land along the Mississippi came into possession of one Richard Martin, a wealthy Minneapolis banker. The entire story is recounted by Larry Millett in his “Architectural Guide to the Twin Cities,” but the basics go like this: Martin willed the land to an orphanage that no longer stands on the site, part of which then went to former Mayor Henry Eustis. Eustis willed half his share to the Minneapolis Public School system, and the other half to the University of Minnesota. At some point in the mid-20th century, the university sold its share of the land, opening it up for housing development.

Of course, by the early 1960s, the city had surrounded the old Martin property on all three sides. Trends in housing and development and land use had changed greatly. And so the developers of the land ignored the grid completely, and dropped a little bit of GI Bill-styled suburbia right on the banks of the Mississippi. In honor of its former owner, each of these loping streets is named for a University of Minnesota president, names familiar to anyone who’s spent any time upriver at the U: Coffey, Folwell, Northrop, Morrill, Burton, Coffman. MinnPost photo by Andy Sturdevant
After buying the land from the University of Minnesota, developers named streets in their new neighborhood after U of M presidents.
Article continues after advertisement

To walk through the neighborhood is to seem outside of Longfellow, with its orderly rows of 1920s-era stucco cottages and bungalows sitting on narrow lots in straight lines. It resembles, in miniature, the neighborhoods outside the 494 loop in West Bloomington or Minnetonka. For one, the lots are much larger. There are no alleyways, and only a few detached rear garages. No “streets” here – they’re all “lanes” and “drives.” Most have front-facing one- and two-car garages with driveways. There is a preponderance of ranch houses and boxy modernist designs, of cedar and light-colored brick and vinyl siding and hip roofs. The color palette, in contrast to the muted neutral tones of the neighborhoods to the north, west, and south, is modern – dark greens, deep reds, pale oranges. It’s a subtle difference, but it’s definitely present, and an interesting reminder at the pace of change in the mid-20th century. It’s only about 30 or 40 years later than the surrounding neighborhoods, but it feels like it’s from a totally different era with very different ideas about aesthetics and utility. I imagine basements and attached garages full of teenagers banging their way through shambling renditions of “Surfin’ Bird,” and dens full of TVs tuned to “Popeye and Pete.” MinnPost photo by Andy Sturdevant
The Ray and Kay Price House was designed by Ralph Rapson.

At least two of the houses are high modernist powerhouses: the Ray and Kay Price House, designed by the famed Ralph Rapson, and the Frederick Lang House, designed by Herb Fritz, a few doors apart on Coffey Lane. Both date to the early 1960s, and both are showpieces for a high-minded style of suburban architecture. Rapson and Fritz are two of the architects that came in the wake of Frank Lloyd Wright (both were his apprentices for periods of time) and were designing a uniquely Midwestern style of progressive, contemporary domestic architecture.

The two houses are showpieces, as noted, but also seem very lived-in. They’re more remarkable than anything else on the block, but they don’t particularly stick out, and they’re meant above all to be functional. Most interesting is watching the architects’ work in the front-facing garage, a relatively new innovation, without having it dominate the exterior. In Rapson’s house, it creates a corridor leading off to the front entrance. Other architects in the neighborhood have accommodated it by building large windows or balconies atop the garage, or thrown on sloping roofs to integrate it into the rest of the house. 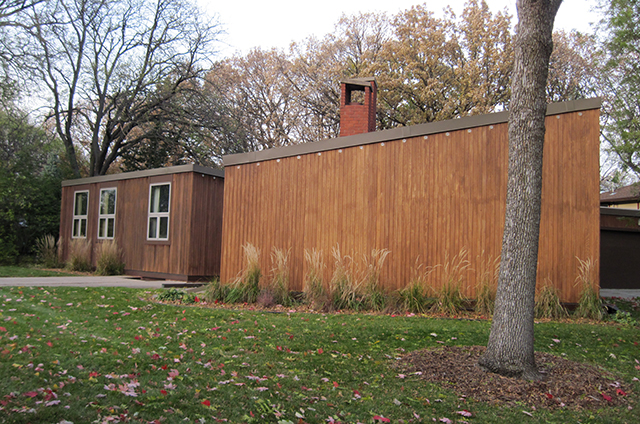 The whole neighborhood, in fact, has a very lightly experimental feel to it. The lines are clean, and the materials are carefully chosen. Besides the Price and Lang houses, there are other nice little touches of postwar modernism in the homes along Coffey Lane and Folwell Drive. There are some geometric decorative grilles, and two moon-shaped address plates on a conjoined two-residence, one-story house. It all seems built to showcase suburban-style architecture inside the city proper, a landscape where cars were a more dominant feature of the landscape, and the land itself was freed from the need to be so rigidly ordered. MinnPost photo by Andy Sturdevant
The whole neighborhood has a very lightly experimental feel to it.

But it doesn’t last long – just about two city blocks long and six city blocks wide. Past that, to the north on the old Martin/Eustis land you find the Dowling School, founded in 1924 as the Michael Dowling School. It was named after the pioneering educator and public figure of the same name who’d lost two legs and a hand as a boy, and toured the country speaking to amputees throughout the early 20th century. It’s a Tudor-style campus, and walking through from the cluster of university president streets to the south, it feels like a more familiar version of the inner Minneapolis city: bucolic, orderly, and old. Coffey Lane and Folwell Drive and the rest are an outlier, an interesting pocket of postwar styles in a city whose residential sectors had mostly been completed and codified decades earlier.

More photos can be found at stroll-on.tumblr.com. Corrections have been made to this piece since it was published regarding the Lang House.