If you live in Minneapolis and use Facebook regularly, there’s a decent chance you follow the “Old Minneapolis” page. It’s a wildly popular repository for images and video of Minneapolis as it looked prior to Oct. 18, 1988, the day Block E was demolished. Started up a few years ago by a local resident named Jesse Jamison, the page currently has 45,869 followers, most of whom are extremely active. For comparison’s sake, the Star Tribune’s Facebook page has only 29,460.

People use the Old Minneapolis page regularly, and they really get into it. Any image that goes up – whether it’s of an old bar, a long-gone restaurant, a candid family Polaroid, a menu, a business card, a storefront – is followed by a thread of dozens and sometimes hundreds of comments. Most of it is of the simple “hey, I remember that” variety, but people also tell personal anecdotes, crowd-source questions, chatter back and forth, and ask follow-up questions of the original poster and each other. Occasionally, someone will manage to find another person they know pictured in the image and tag them.

Spending a little time on the site is a strangely moving experience – at first, it can seem like simple civic nostalgia for civic nostalgia’s sake, but looking further, you’re confronted with a sense of yearning that’s very powerful. There’s this almost overwhelming outpouring of desire from users to remember, preserve and dissect the past of a city that, traditionally, has always assiduously dismissed its own past. Where else would people have a venue to post these memories and impressions?

The material you come across is wide-ranging of material – a few are popular historical images you’ve seen in books or elsewhere, but many are unique objects, fished out of people’s closets, desk drawers, and file cabinets, scanned and uploaded and seen again for the first time in decades.

I joined the page sometime last year, and one of the things I’d see regularly was a series of street photographs, taken in the late 1960s and early ’70s by the same person. They were artful images of people and places, mostly around downtown Minneapolis. Each one had a small credit on the bottom left hand side of the photo: © Mike Evangelist. All photos by Mike Evangelist

They they were all of a very high quality, and clearly hadn’t appeared anywhere else in print, so I was excited to see more of them – I figured it wouldn’t be too difficult to track Mike Evangelist down. And it certainly was easy enough. Mike Evangelist still lives in the Twin Cities, is still an enthusiastic photographer, and has worked in technology for more than two decades, including a multiyear stint with Apple as director of product marketing at the time they were introducing the iPod. But before all of that, he was a teenage kid taking the bus from the northern suburbs downtown to his job in the post office, and bringing a camera along with him to take photos of the people and sights around him. Mike was kind enough to share some of his favorite photos from that time, and reprint them here, some for the first time.

I was surprised at how young he was when most of the photos that he’s posted to Old Minneapolis were shot. He was 17 and 18 years old, for the most part. The photos do reflect a male adolescent’s enthusiasm for beautiful women, but many of the photos of people on the street he encountered – hitchhikers, elderly women on the bus, panhandlers, postal carriers, and general downtown eccentrics – shows a wonderful feel for the sorts of small interpersonal interactions you come across in tight urban quarters. A sly smile here, a sneer there, the sort of bored, nonchalant expression people waiting for the bus affect when no one’s watching them. This woman on a bus throws a dismissive expression at some other unseen passenger, the kind of expression you see all the time on mass transit. It’s perfect. Here’s an eccentric older man, with a blue polka-dotted hat, red scarf, and vinyl handbag, ordering in a restaurant. Mike followed him out onto the street and captured several more of him walking down, but the best one is the first one. Only the cash register dates him to the 1970s. Styles come and go, but the urban eccentric’s costume has been remarkably similar through the decades. You could see a guy dressed like this on Nicollet Mall today.

The photos from Mike’s workplace, the downtown post office, are some of the most interesting — from a visual perspective, but also in terms of showing the mundane inner workings of the sort of place you almost never see depicted on film or mass media. In the photos below, employees – conservative-looking guys with Brylcreemed hair, professional-looking women, and young men with long hair and mustaches all working side-by-side – sort mail under rows of fluorescent lights. Interesting too is much of the signage, shot both head-on and incidentally as part of the background. In the early ’70s, downtown still retains much of its midcentury neon lights and hand-painted signage, but even that seems to be disappearing, edged out by digital displays and more contemporary-looking billboards. The architecture, too, seems caught between eras. The Gateway District is already a decade gone, and the more Brutalist and modern skyscraper architecture seems already to be crowding out brick storefronts and ornate facades. This shot below of three small, independently owned, somewhat down-market businesses – a greeting card shop, wig store, and tie seller – looks right out of the 1940s, until you look to the left of the frame and see the cast concrete office tower looming there. Of course, as you know, the cast concrete office towers win in the end. But that didn’t happen until a little bit later. The city of Minneapolis, as it appeared at the beginning of the 1970s in Mike’s photos, is a vibrant, exciting place, full of pedestrians, bustling streets, commercial activity, and a very agreeable blend of very old and very new, a Midwestern city shared by a burgeoning youth culture and a conservative, graying population. Part of the enthusiasm that comes across in the photos is partially from Mike’s youth at the time, at the idea of being out in the world and equipped with the means to capture it on film. But there’s also an enthusiasm in these photos that’s the result of being excited by one’s surroundings in a city, an enthusiasm that you’re lucky to have in a certain time and place. 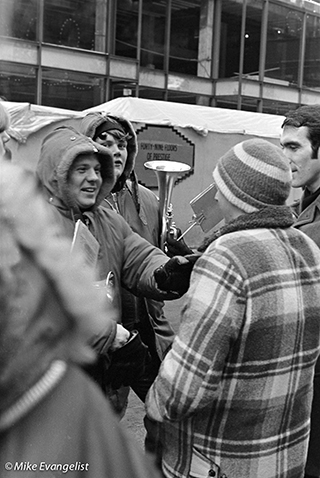