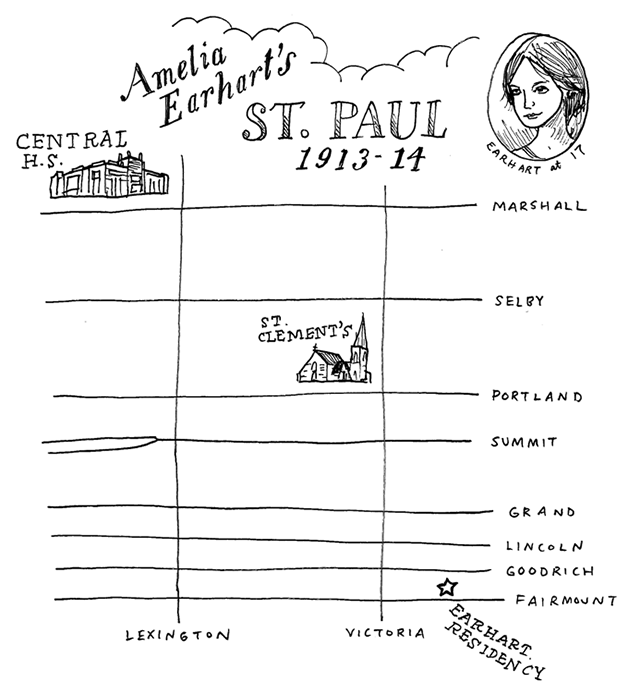 The winter of 1913-14 was an unhappy time for Amelia Earhart. Seventeen years old and a junior at St. Paul’s Central High School, she was living in a  poorly kept rented house with her parents and sister on Fairmount Avenue, between Victoria and Avon in the Summit Hill neighborhood.

A bright, unconventional, and talented teenager, her life in St. Paul was just one small part of an unhappy young adulthood. This period fell between a fairly idyllic childhood in Kansas and Iowa (soon to be ruined by her father’s alcoholism), and a brilliant career as an aviator that began only a few years later. But her year in St. Paul is perhaps the worst of it, marked by the usual hallmarks of an unhappy family life: alcoholism, money troubles, parental discord, family infighting, wasted potential.

I’m not sure there’s really much to be gained from retracing the steps of a notable figure through a neighborhood in which they once lived (especially in a case like Earhart’s, where she left no tangible physical legacy behind). Is Dinkytown actually made any more interesting just because Bob Dylan rented an apartment there for a year-and-a-half? Not really. But the exercise has its uses; you notice details you might have overlooked in the course of a regular walk, and you’re put in mind of thinking about a place as someone else might have seen it.

Late winter in the Upper Midwest is so somber, downbeat, and bleak, and the streets so empty and cold, that it seemed an appropriate time to put myself in Amelia Earhart’s shoes, walking the paths between her home, school, and church, which formed the parameters of her unhappy life.

As I noted, the Earharts lived in St. Paul only for a short time. Amelia’s father, a kindhearted but unreliable alcoholic named Edwin, had lost his job working for the Rock Island Line in Des Moines, Iowa. He’d been able to secure a much lower-paying menial position as clerk at the Great Northern in St. Paul, and in 1913 brought the family north for a fresh start.

Earhart’s mother, Amy, was an Otis, the old-line Boston Brahmin family that had achieved great success all over the East Coast and Midwest. Otis was an old family name in St. Paul; there’s an Otis Avenue, running through a tony part of the city along the river between Summit and St. Anthony avenues. Amy’s Uncle Charles lived here, where he’d been a well-respected judge, library board member, and lawyer. Amy thought her standing as an Otis would provide the financial and social resources the family needed to get back on their feet. In fact, the Otises owned the St. Paul Curling Club, less than two miles north on Selby. That’s exactly the kind of respectable winter social activity that proper young St. Paul people like Amelia would have wanted to join in on.

It didn’t happen that way. Edwin’s drinking and loutish behavior kept Amy’s relatives at a distance, and the family fled St. Paul for the promise of another job in Missouri that ended up not panning out. Amelia would finish her schooling in Chicago, go east for college, and then join her parents in California, where she’d fly for the first time, and begin her spectacular career in earnest. 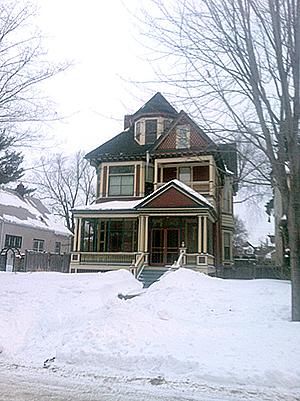 Photo by Bill Lindeke
The house at 825 Fairmount Avenue

But back to St. Paul. The house at 825 Fairmount Avenue is formidable. Built in 1890 and two stories plus a large attic with a turret, with five bedrooms, and about 3,300 square feet, it’s not the kind of place you’d expect a struggling family to be able to afford to live. And in fact, they couldn’t afford it — heating the house was far too expensive, so in the winter, Earhart’s family confined themselves to the two rooms they could heat.

The house had been vacant for two years, in a state of moderate disrepair so soon after it was built, and was not the tidy, beautifully restored house it is today. (And it is beautiful, right down to the perfectly painted and sculpted decorative trim – I wanted to tell the current occupants as much in person, but a locked porch prevented me from knocking on their front door.)

The neighborhood, too, has that cozy feeling that characterizes so many St. Paul neighborhoods. But it’s interesting to imagine how different it must have looked and felt a century ago. The housing stock and commercial nodes are pretty similar to what they would have been like in 1914, so perhaps the physical infrastructure was similar, but everything was only about 20 years old. The trees – those that weren’t wiped out by Dutch Elm, anyway – must have been much more straggly, like the kind you see today lining suburban streets in the most far-flung corners of Maple Grove and Eden Prairie. I imagine it was largely renters at that time, too, workers who, like Edwin, commuted to the warehouses, department stores, offices, and factories of downtown St. Paul.

The center of Amelia’s social life was at St. Clement’s Episcopal Church, a half-mile north on Portland Avenue. It’s an easy walk, now as then, along Victoria past Grand Avenue. Her best friend at that time, a fellow Central student named Marion Blodgett, lived on Osceola Avenue, one block south. The two were members of the Altar Guild, the Junior Auxiliary, and the choir, so they made the walk to St. Clement’s together quite regularly. “The two of them giggled so loudly” in church, notes one biographer, “they drew a reprimand.” 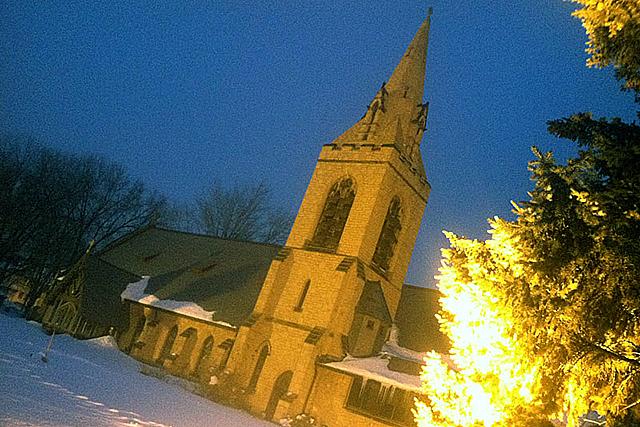 Photo by Bill Lindeke
The center of Amelia’s social life was at St. Clement’s Episcopal Church.

It was also the site of one of Amelia’s greatest disappointments. Dressed up in their best outfits and eager to go to a Christmas dance in December 1913 to meet some dates, the Earhart sisters awaited their father to return home to escort them, as was the expectation of a father at that time. Of course, Edwin got home hours late, after the party had ended, too drunk to escort them or do much of anything else. It was a turning point in the relationship, and in the family’s fortunes. Soon, Amy would stop putting up with Edwin’s behavior and send the girls to school far away from him.

It would have been a nice walk from Fairmount to St. Clement’s. The church was built in 1895, five years after the Earharts’ house was built. It too is  impressive — in the way of the ecclesiastical architecture of that era.

Designed by Cass Gilbert, it conveys a sense of authority and permanence, with very impressive woodwork around the entrances, and a towering steeple easily seen from the surrounding blocks. It looks suited for a wide-open countryside; indeed, it was designed to resemble English country parish churches, with high roof beams and an ornate, rustic lychgate leading to the churchyard. What must it have looked like when it, like everything in the neighborhood around it, was only two decades old? The church itself was named for a mother church in New York City, and so was founded with a sense of history and pedigree that makes it seem older than it is.

At dusk, quiet and cold

The whole neighborhood must have seemed eager to establish itself and eager to become the respectable, stable, and prosperous neighborhood it eventually did become. Did Earhart see that eagerness, that aspirational quality?

I think of the area as she might have seen it, with scrawnier trees, less infill, a little newer and more uncertain. I think of some of those now-stately houses, unoccupied, shabbier, too expensive to heat. Amelia was not completely unhappy during her time here – she wrote in a letter to a friend in Kansas “all the girls here are so nice it’s a joy to be with them don’t you know” – but it was a troubled time in her life. It’s hard to imagine that, if she ever returned, she looked at the place with a large degree of fondness.

But who knows? At dusk, in the winter, a walk through the neighborhood is quiet and cold, but very pleasant. The houses look comfortable. Maybe Earhart would have remembered the friendships and camaraderie in the neighborhood’s street corners and churches and schools. Or maybe she’d consider the obstacles placed before her there that she eventually overcame.

It’s impossible to say, walking through it today. It’s only possible to venture guesses about the area, its history and infrastructure and surroundings, from the perspective of a bright teenage girl who’d eventually become one of the most famous people in the world.

Most of the biographical information here is from Susan Butler’s “East to the Dawn: The Life of Amelia Earhart” (1997).