In early 1857, a Philadelphia-born lawyer named Ignatius Donnelly stood in the center of a small Minnesota town called Nininger City he’d helped found on the Mississippi River banks, surrounded by eager onlookers. He had a reputation as a dazzling orator, so their expectations were probably high, and they weren’t disappointed.

With a flourish, he made the following assertion: “Here I am, but twenty-six years old, and I have already acquired a large fortune.” He then paused, maybe smiled, and posed a follow-up question: “What shall I do to occupy myself the rest of my life?”

In the next forty-plus years, he’d find plenty to occupy himself. He’d serve as a three-term congressman and as Minnesota lieutenant governor. He’d write a wildly popular book about the Atlantis lost civilization, then another three books positing that obscure 17th century cryptograms proved Francis Bacon was responsible for writing Shakespeare’s plays (plus the works of Marlowe and Montaigne).

Donnelly would also keep himself occupied supporting women’s suffrage, organizing for the populist Farmers’ Alliance, running for U.S. vice president on at least two populist party tickets, marrying twice, traveling to England to persuade Oxford and Cambridge dons of Bacon’s Shakespeare identity, editing papers such as The Anti-Monopolist and Emigrants Aid Journal (the latter in English and German), and otherwise living the life you might expect of a statesman, activist, amateur scientist, proto-science fiction novelist, and general nineteenth century eccentric and polymath.

Of all of these accomplishments, however, the one he’d most wanted to be remembered for was his greatest failure. From 1856 until about 1859, Nininger City, about 25 miles downriver from St. Paul, was poised to be a utopian beacon on the Mississippi River. Donnelly hadn’t founded it himself — that would be John Nininger, brother-in-law of Governor Alexander Ramsey — but Donnelly was its biggest booster. 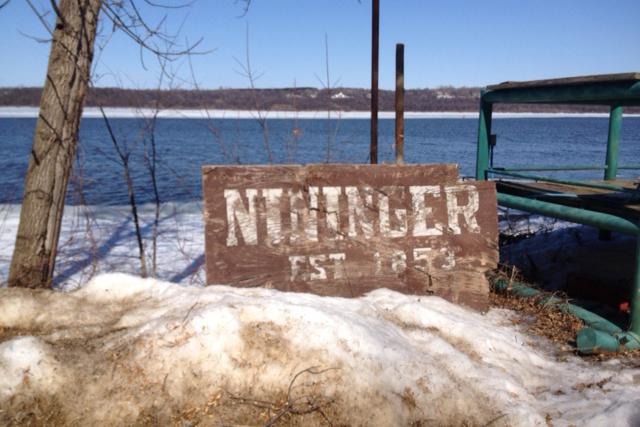 Photo by Ben Weaver
From 1856 until about 1859, Nininger City, about 25 miles downriver from St. Paul, was poised to be a utopian beacon on the Mississippi River.

Nininger City was, for a brief two or three years, a bustling port of at as many as 1,000 citizens, with sawmills, factories, hotels, saloons, a dance hall, a baseball team, and active fraternal organizations. There were plans in place for a public library, a debate hall, and an athenaeum. Overlooking all of it sat Donnelly’s two-story mansion (topped with an “observatory”), sitting at the head of the town on a hill by the river.

It was to be a town settled by the best and brightest Easterners, with a culture of intellectual edification (weekly debates at the Lyceum) and refined leisure (weekly dances at Tremont Hall).

This sort of wild optimism doesn’t seem unlikely, from the perspective of that time. In 1857, Minnesota was not yet a state, and its white settlements were still taking shape. Hastings, down river three miles and its nearest civic competitor, had less than twice as many inhabitants. Mendota, the political center of Dakota County, was equally small. Minneapolis didn’t have enough cows to even rightfully be called a cow town. Nininger City had just as good a shot as any.

Or maybe not. The foundation was shaky. The town’s inhabitants were mostly ruined by the Panic of 1857, and bankrupt citizens fled as quickly as they’d streamed in. The railroad was built on the other side of the river, skipping the settlement. By 1869, nearly all traces of the city’s infrastructure were gone. The factories were dismantled; citizens left for Hastings or St. Paul or new settlements even further afield. The post office hung on until the late 1880s.

Donnelly’s house, of course, remained. The so-called Sage of Nininger spent the rest of his years in the house, living as a country squire, one of the all-time great Minnesota eccentrics, and probably one of the most influential. His house remained standing until the 20th century, slowly decaying and then collapsing, despite the best efforts of local citizens to preserve it. 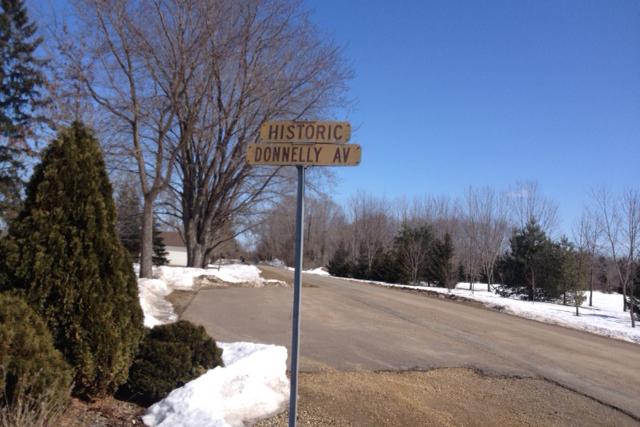 Photo by Ben Weaver
Ivanhoe Avenue was once known as Donnelly Avenue.

Donnelly died in 1901 and was buried in St. Paul. He was equally celebrated and ridiculed, admired as a visionary, brilliant orator and tireless reformer, and marginalized as a crank, dilettante, and pseudo-historian. “A brilliant shooting star,” summarized one writer, “whose orbit was a guess.”

The Nininger City of Ignatius Donnelly is all gone now. Which is not to say Nininger Township, the political entity that succeeded it, is empty. 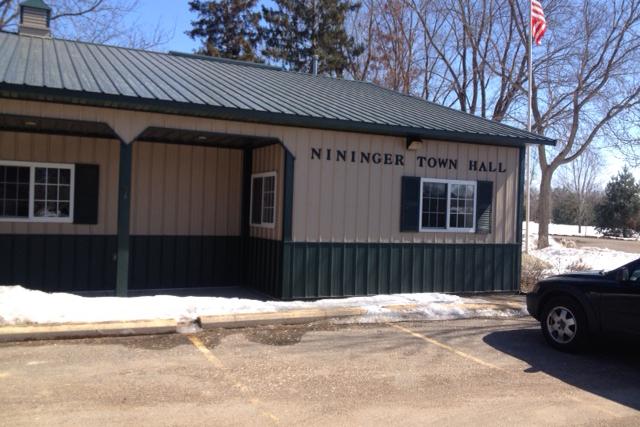 Walking down Ivanhoe Avenue (known once as Donnelly Avenue) on a Sunday afternoon, by the new Nininger town hall, you come across the same sights you’d come across walking through any exurban Twin Cities town from Lakeville to Big Lake: brick and stone two-story houses, most of them built in the last twenty years. There are trucks and vans, parked in driveways. People fly flags for the Green Bay Packers and the United States Marine Corps in their front lawns. There are pink flamingos, signs for remodelers, charming instances of carved wooden yard art. There is even — perhaps in tribute to the town’s utopian roots — a remarkable private residence constructed in the shape of geodesic dome.

The area is pleasantly wooded, but a closer look at the trees makes you realize they’re not really that old — certainly not planted in Donnelly’s lifetime. Nininger City’s gridded urban footprint was carved out of farmland, which had been carved out of woodlands less than a generation earlier. When the city collapsed, the surrounding area was reclaimed as farmland, and now that farmland has been re-reclaimed as modern housing developments, with loping, non-linear streets resting atop the vanished grid. 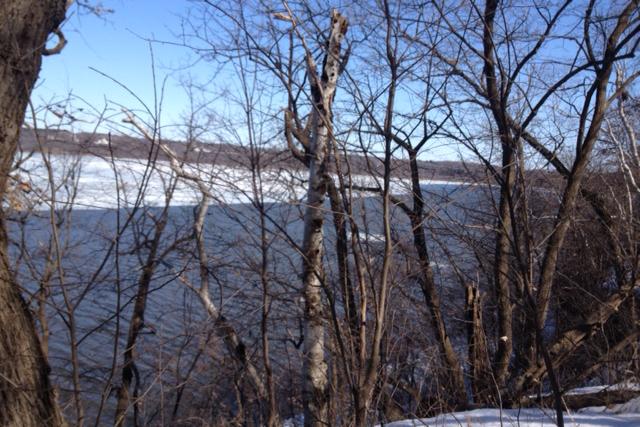 Photo by Ben Weaver
This section of river was dammed in the 1920s, dramatically changing the landscape.

The natural landscape is as relentlessly manufactured as the urban landscape — a fact that becomes very obvious when you look at a Nininger plat map from 1857 and try to orient yourself based on a Google Map in 2014. They look nothing alike — the river in 1857 is narrow, with a small channel running between two curves, and Spring Lake resting by a marsh near the river’s south bank. This section of river was dammed in the 1920s, dramatically changing the landscape. The area by Nininger today is a swollen section of river, with no marsh, channel or Spring Lake remaining.

The park that sits near the site is still named Spring Lake Park. It’s a quiet, seemingly well-preserved corner of wild Dakota County parkland, but it’s useful to keep in mind the landscape is as shaped by human hands as much as any city street; this one would be as nearly unrecognizable to a time-traveling inhabitant of Nininger City as Block E would be to a 1914 Minneapolitan.

Donnelly didn’t know much about city planning — he was only twenty-six, after all — but one can see why Nininger must have superficially looked like a good place for a river town. The riverbank is steep but generally accessible. The view is beautiful.  Down by the river, hidden under some bluffs at the end of a road, there’s an ad-hoc little marina, with a hand-painted sign that proudly declares “NININGER EST. 1853.” There’s a dock house nearby which appears unoccupied, but which has clearly undergone some DIY remodeling at some point in the recent past.

The whole scene is reminiscent of small marinas you find in river towns all through rural Minnesota, the kind that serve recreational boaters. But there’s something about the charming signage, the cobbled-together quality of everything, and the sense of welcome and disorder that also somehow feels kind of urban, like the sort of dock scene you might have seen disembarking a riverboat and walking up Campbell Avenue to the hotel, lyceum or baseball field, wondering what the famous Nininger City had in store for you. 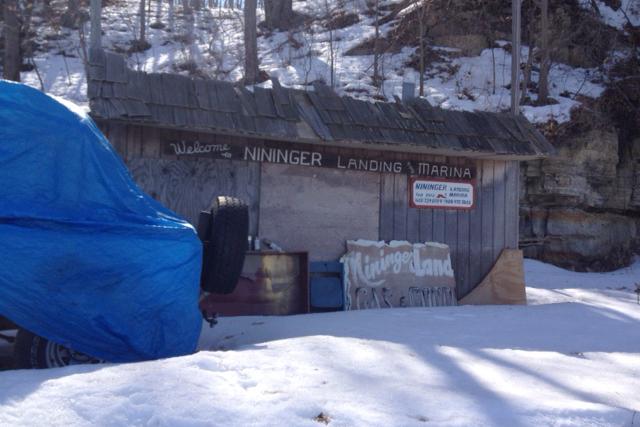 Photo by Ben Weaver
There’s a dock house nearby which appears unoccupied.

But what’s left of that original settlement? Nothing. Or not much. A helpful neighbor points out the site of Donnelly’s house, and allows us to walk through her backyard, to the riverbank, in the heart of what would have been Nininger City’s central business district.

The new town hall, built in 2005, replaced the old one. The old town hall was built in 1858, a two-story building that was first a fraternal hall, then a school. The first floor decayed badly over the last part of the 19th century, so the building was effectively cut in two, the second story becoming its only story. It became the town hall in 1951, was renovated in 1978, and replaced in 2005. The new town hall isn’t much to look at it — it’s a pole barn, basically — but it’s accessible, sturdy, ADA-compliant, and a peek inside the window shows chairs, tables and voting booths arranged in a Rockwellian tableau of small town democratic activity. 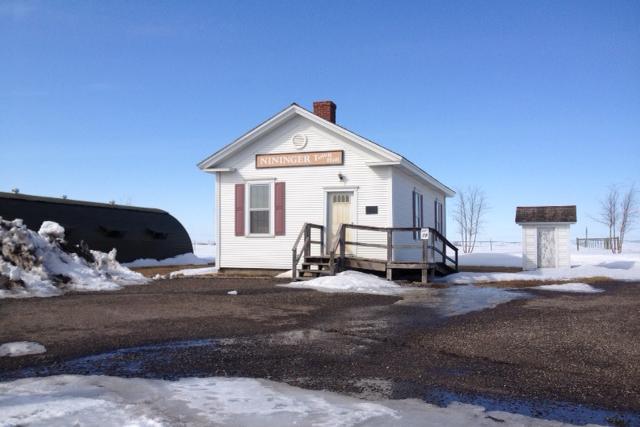 Photo by Ben Weaver
The old town hall from 1858 is still around.

The old town hall from 1858 is still around, though. It was moved to the Little Log House Pioneer Village a few miles away near Hastings, where it sits with a few dozen other old town halls, shops, churches and other preserved structures in perfect stasis. The Pioneer Village is a sort of Jurassic Park for historic pieces of Minnesota architecture, a totally wild and amazing site that will get its own Stroll someday soon.

Until then, the old Nininger town hall sits in the Pioneer Village among a host of other small town halls, each one founded somewhere else in Minnesota with someone’s big set of dreams. As big as those dreams may have been, though, it’s hard to imagine they were as big as Nininger City’s and Ignatius Donnelly’s dreams.

Hastings, the town that eclipsed Nininger City, has an unusually attractive Main Street. St. Paul and Minneapolis are both fine stewards of Minnesota’s urban aspirations. But compared to the outlandish plans Donnelly had in store for his adopted hometown and future metropolis, a sophisticated, progressive beacon to the world combining the best of the East and the West, built on prosperity, advanced learning, and economic justice, where citizens would enthusiastically hold both debates about the authorship of Shakespeare’s plays and modern dances in fancy ballrooms — well, they all seem pretty weak.