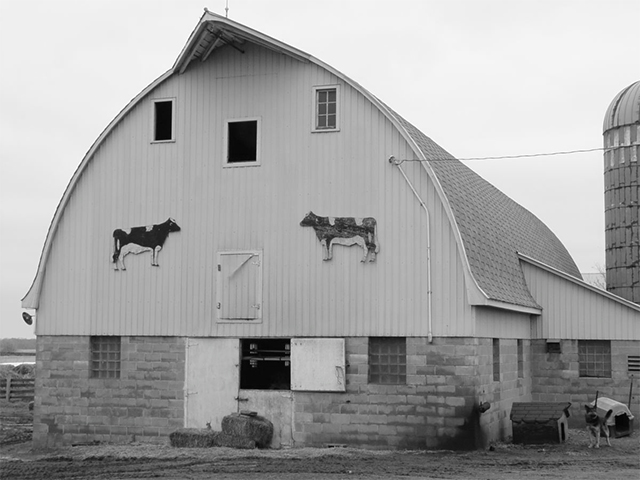 David Enblom is an artist living in Lowertown St. Paul who was recently the subject of a retrospective show at the 262 Building that closed last weekend. It’s a highlight reel of several bodies of work from the past 40 years, unified mostly by Enblom’s keen eye for detail, and even keener sense of wit. There’s a lot of great work in the show – a particular favorite is documentation of a correspondence between him, the sculptor George Segal and the Walker Art Center regarding the placement of napkins in one of Segal’s works on display at the museum.

But the centerpiece of Enblom’s show was a series of hundreds of photographs of barns, all shot on digital camera within about 40 miles of the Twin Cities between 2002 and 2003. Not a few dozen images: hundreds and hundreds of barn, after barn, after barn, culled from a collection of nearly 1,500. All of them are shot in a highly uniform and consistent fashion – three-quarter angle, overcast sky, no trees, no snow. (You can see them on David’s website here.)

Assembled together on a wall or in a book, it’s less like looking at a gift shop calendar with a name like “Rustic Treasures of Rural Minnesota,” and more like examining a photographic family tree, or catalog of some natural phenomenon, like species of insects or flora.

Enblom began photographing barns after visiting a friend in Iowa and driving down Highway 52 through the southeastern part of the state. Maybe it’s just because of the presence of so much fascinating vernacular architecture – besides the family farms, there’s the House of Coates bar and the Pine Bend Refinery – but Highway 52 has proven to be an unusually fertile stretch of road for Minnesota artists. It’s also the subject of a recent artistic collaboration called “House of Coates,” created by writer Brad Zellar and Alec Soth associate Lester B. Morrison.

Enblom also took note of this same landscape, and found himself gravitated to the barns along the way. “Look at that cool barn,” he’d think to himself, multiple times a trip.

Barns, with their silos and gambrel roofs, are the most notable facet of the human-made physical landscape in most of rural Minnesota, especially in the farming country south of the Cities. They’re pretty uniform at first glance, but once you look closely at each one, you notice there’s an infinite amount of variation in color, size, weathering, detailing, shape, and function. Enblom, who drove delivery trucks for several years, found himself spending more and more time looking at barns while on southbound trips, until he figured he might as well start making trips just to go look at barns. 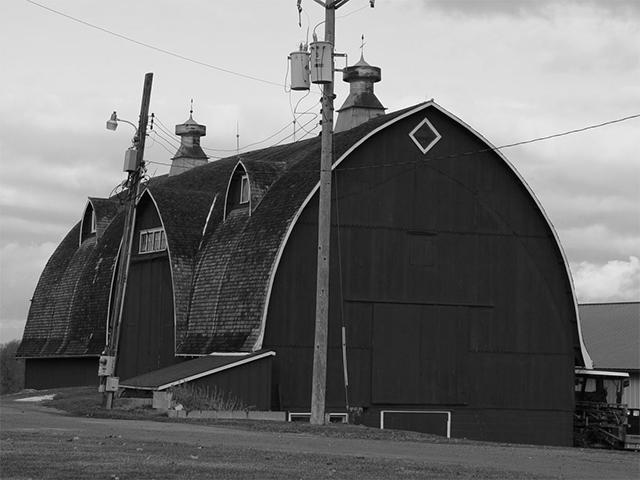 It was just a short step to photographing them. He began doing so, initially with a telephoto lens from the road, but then – upon the advice of a state trooper who prefaced his remarks with the immortal disclaimer “I’m not a lawyer, but…” – by knocking on the farm door and asking for permission to roam the property and shoot a photo of the barn.

Not a picture, but a concept

A quick detour to the Ruhr Valley of West Germany in the late 1950s for a moment. Wherever the topic of artists documenting the physical landscape as a way of organizing, highlighting, and preserving it arises, the names of Bernd and Hilla Becher must be invoked. The Bechers were a German couple who photographed industrial buildings – most famously water towers, but also refineries, silos, grain elevators, cooling towers, and other similar structures – in a very systematic, detached, straightforward fashion. Beginning in the late 1950s, their work continued until Bernd’s death a few years ago. 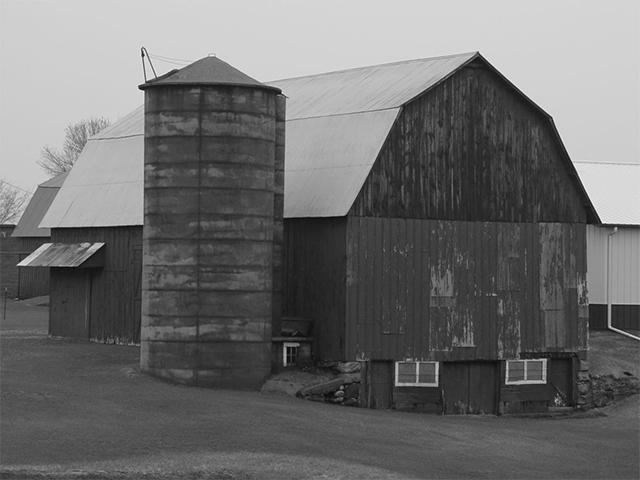 The Bechers would organize black-and-white silver gelatin prints of these images into grids, which would emphasize or deemphasize similarities in what they described as anonyme skulpturen, or anonymous sculptures. Most important to capturing a uniformity to these architectural typologies, the Bechers had three conditions: they’d always shoot the buildings on overcast days, with no snow on the ground, and with no leaves on the trees.

Enblom, like many artists with an interest in the physical environment (and I include myself here), is a longtime admirers of the Bechers’ work. When he began shooting the barns in 2002, he thought to himself, “Why don’t I just use their criteria?”

He did, and all of these photos are shot on an overcast day in spring or fall, with no leaves on the trees and no snow on the ground. Enblom describes the work resulting from the Becherite philosophy as being “not a picture, but a concept.” The artwork is not necessarily in the individual photos, but in the images assembled together, in grids and groupings, putting them into that tightly organized cataloged framework.

Less than a day’s drive

In addition to the Bechers’ criteria, there’s another similar, unspoken set of criteria applied to Enblom’s images. Since he needed to shoot his work on a day guaranteed to be cloudy – not to mention that he also needed to get home in time to feed his dogs – he would only embark on barn-finding expeditions less than a day’s drive from the Twin Cities. 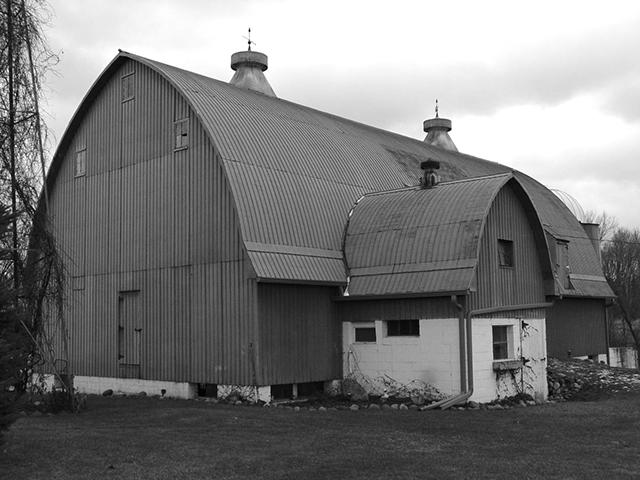 If he’d made overnight trips and stayed in hotels, he might waste an entire day by waking up in the morning, finding the sun shining, and consequently unable to shoot. All of these barns, then, are less than 40 miles out, existing in the perimeter between the edge of suburbia and a day’s drive to and from the urban core.

This seems to me to be one the more interesting aspects of the project, the fact that this enormous, almost unending catalog of rural vernacular architecture exists in such abundance so close to the city.

The family farms that are hanging on just outside the limits of the sprawl are a reminder of the economic roots of the state and of the cities themselves. Despite the abundance of barns and small family farms, Enblom says, “they really are a vanishing thing. There was a huge boom in farming, and now to see it from this vantage point – there’s a melancholy aspect.”

As noted, the Bechers called their images “anonymous sculptures.” They resemble aesthetic objects when grouped together, putting the physical details side-by-side and closely examining the minor variations in form, intent, and decoration. Removing any capital-A “Artistic” intent in the documentation emphasizes the individuality of the structure and its anonymous creator.

There’s a touching irony to this detached approached, of course. “It’s dry documentation,” Enblom says. “But it’s also human subject matter. I was trying to be scientific, detached, eliminate any artiness. But people will get so emotional. They’ll come up to me with tears in their eyes when they see them and tell me about the farms they’d grown up on. I wasn’t going for that level of engagement, but it’s very human subject matter.”

Before they disappear, look closely at these nearby barns