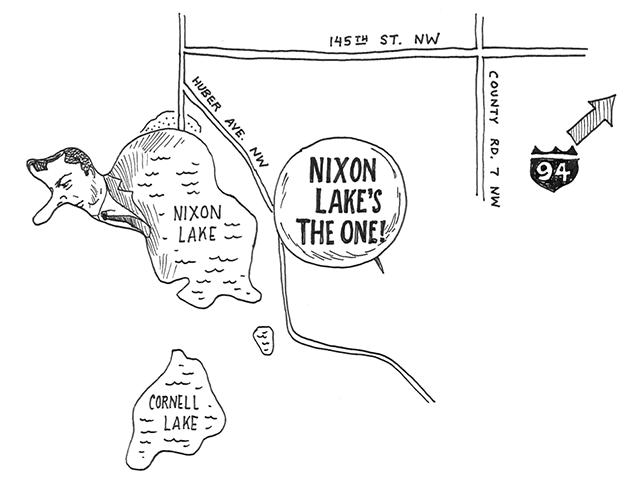 Let me make one thing perfectly clear, as the man himself was supposed to have said: the only reason I wanted to visit Nixon Lake is because it’s called Nixon Lake.

Fifty-six acres, about an hour northwest of the Twin Cities in Wright County, the lake has a public access and small beach at the end of a half-mile of dirt roads not far from I-94, roughly halfway between Annandale and Clearwater.

It’s an awkward shape on the exurban landscape that resembles, with a little imagination, the figure whose name it shares. You can almost read it as hunched over, with poor posture, and the suggestion of a ski-slope nose on its west shore. You can see I am already reading too much in the totemic power of that name. In person, it’s not much different than any of the other 10,000 lakes in the state, or the dozen other nearby small lakes: Shelden, Ember, Twin, Weigand, Grass, Bass. But what sets it apart on the map is that name. 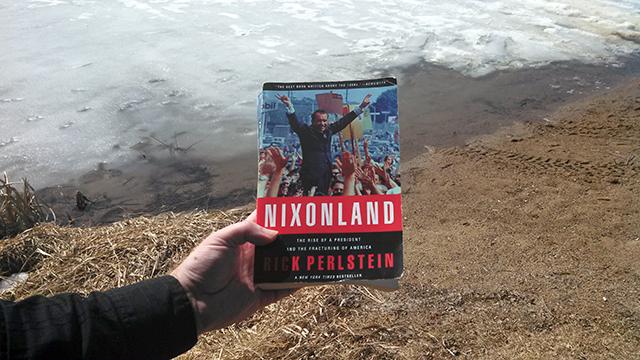 MinnPost photo by Andy Sturdevant
Essential reading on the shores of Nixon Lake.

On a Sunday morning, with nothing better to do, the absurdist cry of “Hey, let’s go to Nixon Lake!” — conjuring up contradictory images of easygoing lakeside recreation and perhaps our least easygoing, most socially awkward president — is too much to resist. I pack my copy of Rick Perlstein’s Nixonland into my bag and head out.

Nixon Lake is, of course, not named for Richard Nixon. It was named long before Richard Nixon was born half a country away in 1913; the online Minnesota Place Names directory states that it and its neighbor Cornell Lake were named “for early settlers” of Wright County sometime in the 1850s.

Still, it’s impossible now to think of the name “Nixon” without thinking of the 37th President. There are actually quite a few lakes that share names with American presidents. There are a few Washington and Johnson Lakes, two Roosevelt Lakes, and a Bush Lake, Grant Lake, and Buchanan Lake, among others. Many of these are undoubtedly named for those presidents. But none of these lakes have the immediate associations that spring to mind at the mention of Nixon’s name.

I first encountered Nixon Lake as part of a design project called Branding 10,000 Lakes, by Minneapolis designer Nicole Meyer. Every day in 2011, Meyer would design a quick logo for a Minnesota lake, plugging along admirably until she (very understandably) got sick of designing logos for every single Minnesota lake, a processs that would take 27 years.

I remember coming across her design for Nixon Lake, and first being surprised there was a Nixon Lake, and then reflecting on the oddness of the name itself, especially made up in blocky, bold text over an image of lake water. Concerning the word “Nixon” itself, writer Mark Feeny breaks it down the best in his great 2004 book Nixon at the Movies:

Those five five-o’clock-shadowed letters would sit there and sigh — stop a moment to linger over the sound of them — like sullen poetry on the page. It’s such a simple abrupt name (almost a palindrome): the symmetrical n’s, a pair of glowering bookends; that sinister, axial x, poised in the middle, neat as a cross; and the two vowels, so close but in the end not, with that notness violating the perfection of the lexicographical arrangement and, in the intractable opposition it comprises, representing the man’s own insurmountably divided nature: the echt-anti-Communist who went to Beijing; the self-styled man of the people who shrank from the company of others; the embodiment of propriety whose mere presence could set of paroxysms of rude, irrational, even outrageous behavior in everyone from student to senior statesman.

See: even the physical qualities of the letters that make up Nixon’s name speak to the specifics of his character. I thought it was interesting that Meyer called her project Branding 10,000 Lakes — none but the best-known lakes have clear-cut branding associations, though how could you brand something like Nixon Lake as anything other than having something to do Nixon?

In her graphic, Meyer avoids specific visual invocations of Nixon, though just the name itself prompts the association. Maybe I drove out expecting to find some similarly Nixonian quality in the lake itself.

Of course, I found nothing of the sort. I’m not sure what I expected to see. Nixon Lake is, as I noted, a perfectly respectable lake, utterly unremarkable in almost every way. Speaking of making things perfectly clear, however, it does seem to be a little cleaner than your average lake, with what appears to be terrific visibility. The lake is lined with wetlands and cattail fringes, which, according to the DNR, contributes to this fine water quality. It has a larger than average number of northern pike, and a smaller than average number of largemouth bass. There is at least one video on YouTube of two scuba divers swimming through the sixty-five foot deep lake, among schools of crappies and bluegills, sunlight illuminating the entire bottom of the lake with an unearthly yellow glow. 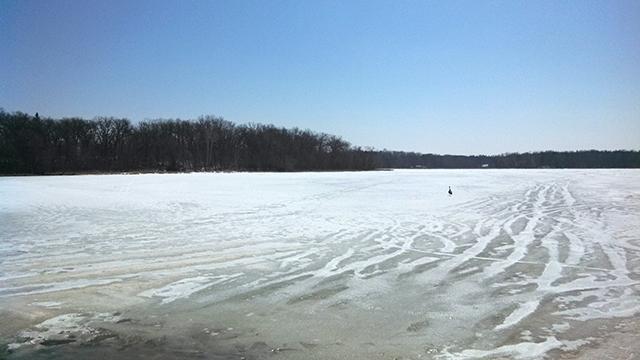 On the morning I visit Nixon Lake, it’s right before the thaw earlier this week, and probably the last day it’ll be iced over this winter. A few noisy geese are scurrying across the top of the ice.

The north shore of the lake has a public landing, located very near a tidy homestead with an Annandale address on the mailbox. The beach itself seems well used: there’s evidence of a few fires and the remains of an ice fishing shanty wrapped in a tarp. There’s also a handsome, sturdy red bench, facing the lake. Search as I might, I can’t find any plaques on it in memory of Nixon’s visit to Red China. Why else would there be a red bench? Or wait, maybe someone had purposely painted the bench with an anachronistic Election Night results map Republican red? 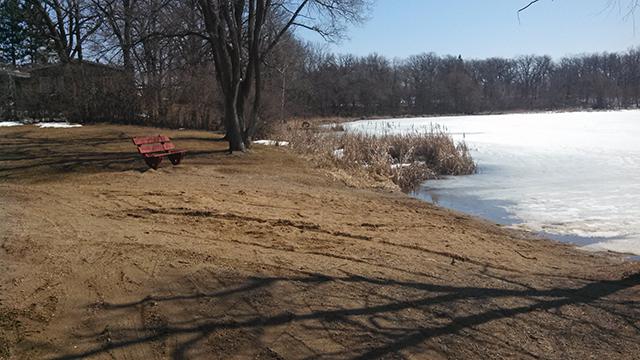 MinnPost photo by Andy Sturdevant
Search as I might, I can’t find any plaques on the red bench in memory of Nixon’s visit to Red China.

See, I am clearly stretching. Walking along the shore, I feel like that famous photo of Nixon strolling down the Southern California beach dressed in wingtips and a suit, smiling uncomfortably and looking stiff and out of place, despite growing up thirty miles from the Pacific Ocean and spending much of his time in beachside San Clemente. I, too, am out of place, looking for Nixon where there is no Nixon to be found. It’s just a name. In fact, it’s probably keeping me from enjoying Nixon Lake on its own non-Nixonian terms.

But names are powerful things. If Nixon and Cornell, the two Wright County settlers, had flipped the coin differently, and Nixon had ended up with what’s now Cornell Lake, to the south of what’s now Nixon Lake, would I still want to see something like a ski-slope nose or hunched over bearing in that lake’s shape? (Probably not — Cornell Lake is just sort of triangular in shape.) (But wait! Isn’t there a sort of jowl shape there on the bottom?)

We don’t know how the assigned names of a place will change or mutate or shift in meaning over time. Even the name Nixon may seem as unremarkable to future generations out of living memory of the 1960s and ’70s as it seemed to those generations that came before that era.

You can brand a lake easily enough. In terms of how it’s branded already, Nixon Lake is clearly thought of by the scuba divers and beachgoers and fishing hobbyists and snowmobilers of Wright County and central Minnesota as a fine, pleasant recreational lake. But it’s hard to hear someone say, “Hey, let’s go up to Nixon Lake,” and not have the urge to think about Watergate or the Vietnam War or the moon landing, or at least smile and tell them, “Sure. I’m tanned, rested, and ready.”

I am not a brook: meet Minnesota’s Nixon Lake