When I was in college, there was a short-lived literary magazine in my hometown called Churches Banks and Bars. I don’t actually remember reading it, so I can’t speak to the quality, but I do still remember that title. It’s such a good one, and I think I internalized it while younger as shorthand for the ideal urban landscape (it’d also be a good name for this column, come to think of it, but it’s too late to steal it now). That phrase so gracefully conjures up a vision of the sorts of street corners you might come across in many American cities, and particularly cities built up during the 19th century by European immigrants. Places of fellowship, places of commerce, places of leisure, all hemmed in together. Like one the oldest nicknames for Brooklyn, dating from the 1830s: the borough of churches. Build a church, and the bars and banks can’t be far behind.

Last weekend was Art-A-Whirl in Northeast Minneapolis, which is just such a community of churches, banks and bars. As much as I like seeing the art and all the people out in the streets, my favorite thing about walking around the square mile centered at 13th Avenue and University during the weekend is that so many of the churches have thrown their doors open to show what’s inside. If you’re not a regular churchgoing sort of person, you almost never get to see the inside of the city’s houses of worship, which is too bad, because from a strictly aesthetic angle, they’re full of remarkable sights – as much or more so than the outsides, which are often remarkable themselves. Think of the green mottled copper steeple of the Church of SS Cyril and Methodius near University and 13th Avenue NE, looming over the landscape as you cross the Broadway bridge, as much an icon of Northeast as Nye’s Polonaise Room’s façade or the old Grain Belt Brewery complex a few blocks away.

Of course, this was a good weekend to investigate a pervasive urban legend about Northeast. If you go into one of those bars (or banks, I guess) and talk to some of the Northeasters around you about ecclesiastical neighborhood attractions, at some point someone will make the following assertion: The block north of 13th Ave. NE between Madison and Monroe Streets is in the “Guinness Book of World Records” for being the only city block in the world with a church on each corner. This is one of those civic booster boasts – like the one about Minneapolis having more theater seats than any city but New York – you often hear repeated but rarely see hard documentation about.

Larry Millett mentions it in his authoritative “AIA Guide to the Twin Cities,” so I am sure it’s based on fact somewhere along the line. But even if it is the only such collection of churches in the world – a fact I find very hard to believe – wouldn’t it fall under more of the category of a “Ripley’s Believe it Or Not”–style odd factoid than a world record? It’s not really the sort of feat that can be adjudicated in the same way as the tallest church or oldest church – the official Guinness website notes that “if you can’t take a tape-measure to it, weigh it or count it … then it’s probably not a record.” By this metric, the four-churches-on-one-block record only barely counts. I am charmed by the idea but dubious that this is actually a world record of any kind. The only reference to the Twin Cities I can find in any archival copies of the “Guinness Book of World Records” is Alain Roby’s 12-foot cooked sugar sculpture of the John Hancock Tower at the Mall of America in 2006. (As a side note, it seems worth mentioning that the Mall of America also has a church, some banks, and some bars in it.) 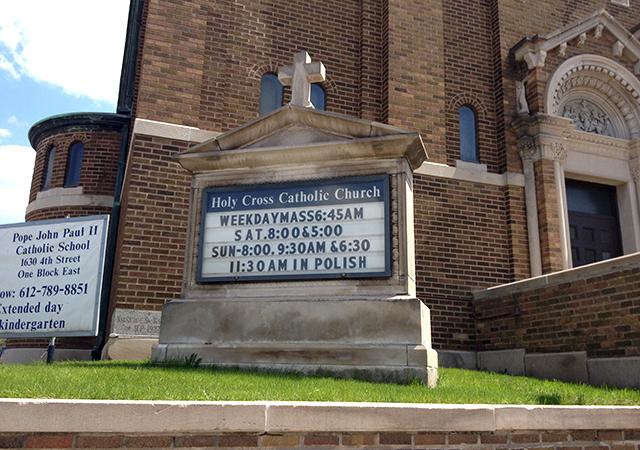 MinnPost photo by Andy Sturdevant
Another of the more imposing nearby facades is Holy Cross Catholic Church, founded by Polish immigrants in 1886.

In fact, the four-churches-on-one-block is one of those things I’d always heard about but never actually seen in person. What better time to check out than Art-A-Whirl? I assumed it would be like standing in the middle of the intersection and having four churches looming over you from each corner. It isn’t like that at all, but regardless, it is pretty remarkable to find Emanuel Evangelical Lutheran Church (built in 1899), Strong Tower Parish (1911), Elim Baptist (1904), and the former St. Peter’s Lutheran (1905) all sharing the same block, even if Strong Tower Parish isn’t on the corner like the others.

None of them are open for Art-A-Whirl, unfortunately. It does speak to the domination of Lutheranism in early 20th century Minneapolis that there’s such a density in one place.

It’s a density they shared with Catholic and Orthodox demonimations, and from this juncture, it looks a lot like those two have more of a contemporary cultural presence in the neighborhood. Another of the more imposing nearby facades is Holy Cross Catholic Church, founded by Polish immigrants in 1886, and which still offers a Polish-language Mass every Sunday at 11:30. Not far from Holy Cross is another Polish Catholic church, Sacred Heart, which also owns one of Northeast’s best-kept secrets, the Pulaski Auditorium (full disclosure: I had my book release party there last year). It’s a little event hall, no bigger than a small house, with a velvet-curtained stage and full kitchen. The stage is flanked by framed portraits of the two great heroes of Polish America: Revolutionary War commanders Tadeusz Kościuszko and Casimir Pulaski.

Without fail, my favorite Art-A-Whirl destination is always St. Mary’s Orthodox Cathedral, at 5th St. NE and 17th Ave NE. It’s always open for the weekend to visitors, and in addition, they always bring out a selection of icons, created by a wide range of artists, from amateurs and enthusiasts to trained iconographers. My favorites are those depicting the Patron Saint of North America, Herman of Alaska, an Orthodox monk and missionary who lived and worked in what was then called Russkaya Amerika in the 19th century. Something about the snowiness and barrenness of those scenes is charming, and the idea of a bearded hermit living in America not that long ago, depicted in the classically iconographic fashion, holds a fascinating appeal. 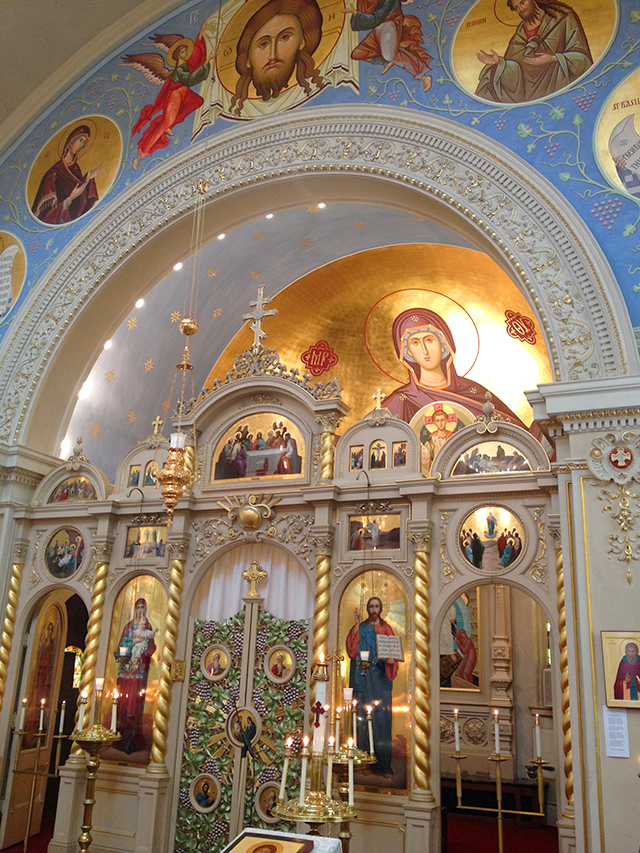 MinnPost photo by Andy Sturdevant
St. Mary’s Orthodox Church always brings out a selection of icons, created by a wide range of artists, from amateurs and enthusiasts to trained iconographers.

Not only is St. Mary’s a favorite aesthetically inside and out – its domes give it perhaps the most striking profile of any Northeast church – but the congregation’s creation story is fascinating, as interesting as any Guinness record.

Though it’s a Russian Orthodox church, St. Mary’s was not actually founded by Russians. It was founded by immigrants from the mountains of present-day Slovakia, then under the rule of the Catholic Austro-Hungarian Empire. As such, these immigrants were Eastern Rite Catholic, with their allegiances to the church in Rome.

Of course, Father John Ireland, the assimilation-minded political and religious head of the Catholic Church in the Twin Cities in the late 19th century, didn’t see it that way. When the leader of the St. Mary’s congregation, Father Alexis Toth, went to meet with him, Ireland condemned him bitterly, refusing to accept the Catholicism of either Toth or his “ethnic,” non-English speaking congregation. 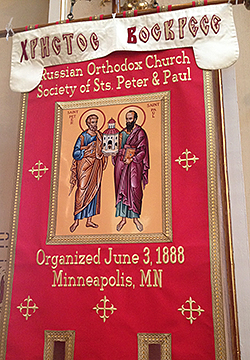 At this point, after a lack of direction from back in Slovakia and some positive conversations with a Russian bishop in San Francisco, Toth converted to Russian Orthodoxy in 1891. St. Mary’s converted with him, and the church became Russian Orthodox. Toth was later canonized by the Russian Orthodox Church. He is one of only a few North American saints, and one of even fewer that aren’t associated with Alaska. He is, as far as I can tell, the only saint in either the Orthodox or Roman Catholic traditions associated with Minnesota.

The interior of the church is otherworldly – color, imagery and ornament from floor to domed ceiling. A chandelier hangs from the center, and the front of the church is dominated by the Iconostasis – a wall of icons that connect the altar to the nave. There’s a timelessness to the faces of Jesus, Mary and the saints that makes it difficult to determine how old they are, but many of them date to a fairly recent renovation. A docent explains that the earlier, midcentury icons around the altar were quite Western in orientation – that, until the fall of the Soviet Union, there weren’t a lot of artists in the United States carefully trained in the Russian Orthodox tradition. Many of them now in the church are painted by a Russian iconographer living – like Toth’s Russian bishop – in San Francisco.

As I leave, a balalaika orchestra is setting up outside, and people are making their way off the street up the steps into the sanctuary to see the icons. It’s always interesting to see artists’ studios and beer taprooms during Art-A-Whirl, but the best part of a neighborhood of churches, banks and bars is discovering the artistry, histories, stories and interrelatedness of each of these types of neighborhood institutions. Even if you never make it into a church for ecclesiastical reasons.