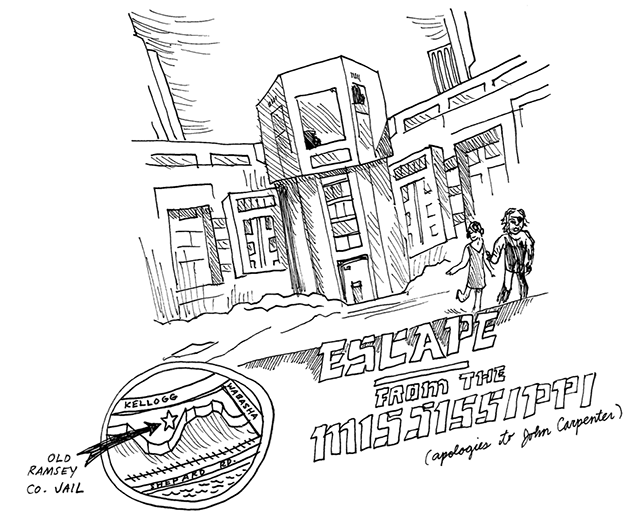 MinnPost illustration by Andy Sturdevant
“Against a backdrop of pervasive criminal mayhem and irreversible urban decay, an elite committee of Ramsey County’s elected leaders, top law enforcement officials and modernist architects met in the waning years of the 1970s to develop a new weapon in the ongoing war on crime…”

Walking down by the Mississippi River in downtown St. Paul reminds me more than anything of walking through the city’s alleyways. There is a sense that you’re in the city’s backyard, behind the orderly civic façade that’s presented for public view.

This idea is reinforced looking up the bluffs at the city from down on Shepard Road. From the Custom House to City Hall, the bluff line on the north bank of the Mississippi is ridged by an unbroken string of buildings whose backs are facing you. The river is, like an alley, a place of utility – a place for barges and railroads and lift bridges, but not necessarily the sort of place to be admired or used recreationally.

Or that was clearly the city’s position until pretty recently. In fact, it’s still so sparsely populated and parts of it are so industrially oriented — it’s the only place I know of in either downtown where you can see an active truck, train and barge all within 300 feet of one another — that there are stretches where you wonder if you really belong there at all.

That’s changing, of course. There is a very nice bike trail hugging the edge of the river, and there are public squares and artwork popping up here and there. Newer buildings are now built facing the river, so the impression one gets that the city’s back is literally turned to the Mississippi is softening.

St. Paul, like its sister Minneapolis, or just about any of its inland brethren anywhere in America, is waking up to the fact that the riverfront can be a valuable asset and an important part of a community, and not something to be ignored or abused. This is a healthier attitude for both the river and the population. But the fact that the river is seen as a valuable economic and natural community asset is so self-evident in the early 21st century that it makes it difficult to imagine why it was not always so.

Jail is a good place to start

There are a few remarkable structures and buildings along the way worth looking at in some detail, but a good place to start is with a building that captures the city’s attitude toward the river through at least the 1980s. It is the old Ramsey County Adult Detention Center, built in 1979. Along with a suite of adjacent buildings once owned by West Publishing, it has been vacant since 2003. In fact, the jail outgrew its capacity only a few years after opening. 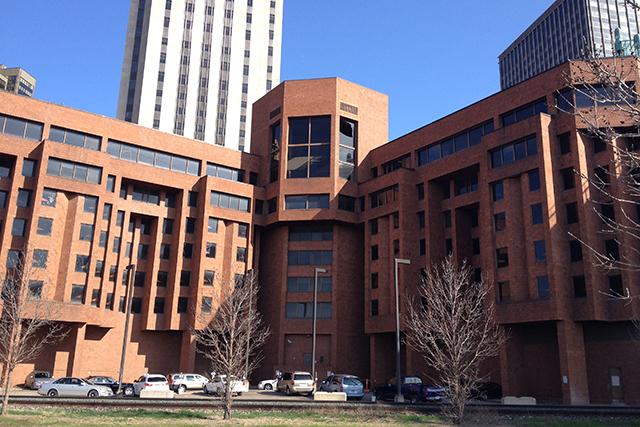 MinnPost photo by Andy Sturdevant
The old Ramsey County Jail was built in 1979.

You’ve maybe never seen this building, especially if you’ve never ventured down Shepard Road. It’s hidden from view of most of the city, a red-brick fortress wedged neatly up against the Wabasha Bridge. Its façade is in bad shape – windows are visibly broken, and hawks have started nesting in the crevices. No one can quite, at the moment, figure out what to do with it.

“Tearing that old building down, I don’t think anyone would shed any tears,” said the director of the Friends of the Mississippi River in a 2013 article in the St. Paul Pioneer Press.

And he’s right: It’s ugly. It’s weird. From a strictly economic perspective, it’s a terrible use of what is now prime riverfront real estate. In fact, the only people who might feel any sadness about the old jail disappearing are the folks at the Minnesota Film and TV Board. They have the building enthusiastically listed on their online directory of potential filming locations as a perfect option for productions requiring “PRISONS/JAILS” with a 1970s architectural style. There are some photos of the interior, and it looks incredibly bleak. If I were filming a 1970s prison thriller and I wanted something that split the difference between “Escape From New York,” “Kiss of the Spider Woman,” and “Assault on Precinct 13,” I’d be on the phone with the Film and TV Board immediately.

In a cliff, under the city

In fact, the old jail is so spectacularly odd and unique, I think we have to resort to cinematic tropes in order to fully appreciate it. Open a new tab, hit “play” on this 1970s-era soundtrack classic, and please read the following to yourself in the most portentous voice you can muster:

Against a backdrop of pervasive criminal mayhem and irreversible urban decay, an elite committee of Ramsey County’s elected leaders, top law enforcement officials and modernist architects met in the waning years of the 1970s to develop a new weapon in the ongoing war on crime. Their plan: to design and construct a state of the art high-security underground fortress built below the streets of downtown St. Paul, beneath the feet of the very citizens it would protect. This facility would house the most dangerous elements of not only the city’s criminal underworld, but those of lawless outlying districts like North Oaks and Maplewood as well. Not only would this sprawling citadel be located below the streets, but it would also be built directly into the side of a sheer cliff, seven stories high and facing out only toward a polluted post-industrial aquatic hellscape in order to ensure that, for its inmates, there could be no escape.

Get the idea? The building was meant to look attractive from the river, and spur urban development above. But in some sense, it’s exactly what we’re looking at: a prison built into the side of a cliff underneath the city. It’s practically science fiction, and sometimes the past seems so bizarre, a science fiction framework is the only way to start to understand it. If you’ve eaten at a food truck in downtown St. Paul, you’ve stood atop this building; there’s a public plaza right above it where the trucks all congregate in the warmer months, facing the river with a wonderful panoramic view. I’ve eaten there numerous times, and not once considered that I was standing above an abandoned prison.

Maybe I’m going out of my way to be a contrarian here, but I like this building. It’s bizarre, cinematic and unapologetically oppressive. But those factors aside, it doesn’t do a totally terrible job complementing its surroundings. To the east of the building, right on the other side of the bridge, there are some sheer white cliffs – the surface of the jail building, with its blocky outcroppings and stony intransigence, echoes the cliffs on the east side of the bridge pretty effectively. 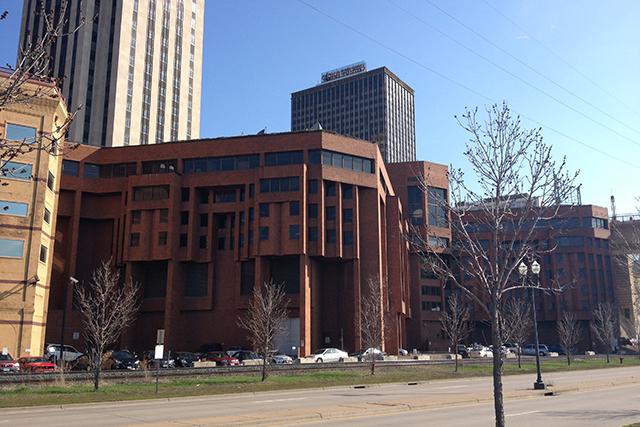 MinnPost photo by Andy Sturdevant
Put yourself in the mindset of a 1970s bureaucrat, looking to hide criminals away in the most convenient and inexpensive way possible.

That aside, I think I like it because it’s a valuable lesson in realizing how unknowable the past can be, and how perceptions of a place can change completely in the space of only a few decades. Put yourself in the mindset of a 1970s bureaucrat, looking to hide criminals away in the most convenient and inexpensive way possible, and also do something productive with that waterfront. The best answer is clearly to build a modern brick superstructure into the side of a cliff in an industrial corridor used almost exclusively by boats and trains, right? No one will see it, and no one will really mind. In addition to that, what if you can also create a public plaza on top of that, allowing people to see out onto the river? It really makes sense, from that perspective. In fact, the old jail won an award from the American Institute of Architects when it opened. It was commended for making “a site that was an urban ‘throwaway’ as useable” and “a boundary-stretching operational and architectural solution.”

Appropriately, the infrastructural emphasis along the river road bears the imprimatur of George N. Shepard, the city’s chief civil engineer in the early 20th century who designed numerous roads and bridges and advocated for I-94. Looking up at the old jail from the road that bears his name, its windows busted and slowly decaying after only a quarter-century, it’s good to be reminded that attitudes about design, place, ecosystems and architecture can change pretty swiftly.

Next week we’ll walk further down Shepard Road and look at some of the other structures there, and how they’ve reflected the city’s attitude toward the Mississippi – the City House, the flood mounds, and the Port of St. Paul.

There’s something curious about the way St. Paul turned its back on the river