Here is a somewhat dubious superlative for the city of Minneapolis, suitable for any boostering or anecdotal purposes: It is the largest city in North America to be located exactly halfway between the Equator and the North Pole, right on the 45th parallel. Minneapolis (population 400,700, despite what the signs on the freeway say) would be the largest such city in the world, but unfortunately, there are two Eurasian cities with larger populations also crossed by the line. The 45th parallel runs near a commemorative obelisk in the Piazza Statuo in Turin, Italy (population 908,551), and then through an industrial park on the very southernmost tip of the Russian city of Krasnodar (population 744,995).

But biggest in North America’s not bad.

The 45th parallel is the imaginary circle of latitude bisecting the Northern Hemisphere, 45 degrees north of the Equator and another 45 degrees from the North Pole. In the Twin Cities, the 45th parallel runs through the western suburbs, over Medicine Lake, then through Golden Valley and North Minneapolis, running just a few yards south of 21st Avenue North. It crosses the Mississippi into Northeast Minneapolis, almost exactly halfway between 12th and 13th Avenues Northeast, then Roseville, Lake Elmo, and finally across the St. Croix into Wisconsin and points east – Michigan, Vermont, France, Croatia, the Crimea, Inner Mongolia, Hokkaido in northern Japan, the Kuril Islands, Oregon, the Montana/Wyoming border, and back again through Plymouth.

It’s marked locally by a boulder and plaque in Theodore Wirth Park, and by another boulder and plaque along Cleveland Avenue in Roseville. (Informed readers have brought my attention to a third sign near Medicine Lake I missed on my first go-around.)

As neat as it is being halfway between the North Pole and Equator, it’s not hard to understand why there are not more sites commemorating that fact along the way. Being wholly imaginary lines only visible on maps, these demarcations don’t usually align with any part of the physical or built landscape up close. Historically, lines of latitude were used to draw the sorts of large features of geography not visible from below. That includes many state, provincial and territorial borders drawn in the 17th and 18th centuries – the western half of Canada and the United States are separated by the 49th parallel, and anytime you see a straight border on a map (Montana and Wyoming, Washington and Oregon), it’s probably along a line of latitude.

When you get down to street level, though, crossing these lines doesn’t mean much. There are “you are halfway between the Equator and North Pole” roadside signs and markers common throughout the U.S. and Canada, but on a smaller scale, standing on a latitude line doesn’t seem much different from standing on any other point. Cowern Place in North St. Paul seems to align perfectly with the 45th parallel, but the very non-monumental quality of that name makes me think it’s just a coincidence. The location does manifest itself in the names of a few local businesses – including a design firm called 45 Degrees in Minneapolis, as well as an outdoor store in Stillwater, the new North 45 Degrees restaurant in the Millenium Hotel on Nicollet, and the 45th Parallel Distillery, an hour east in New Richmond, Wisconsin.

The two local markers are both small, but worth seeing. In fact, the totally unremarkable quality of their locations – both of them are practically sitting in someone’s front yard – make their globe-spanning proclamations all the more noteworthy. Both of them would be fun to stumble upon without knowing anything about them. 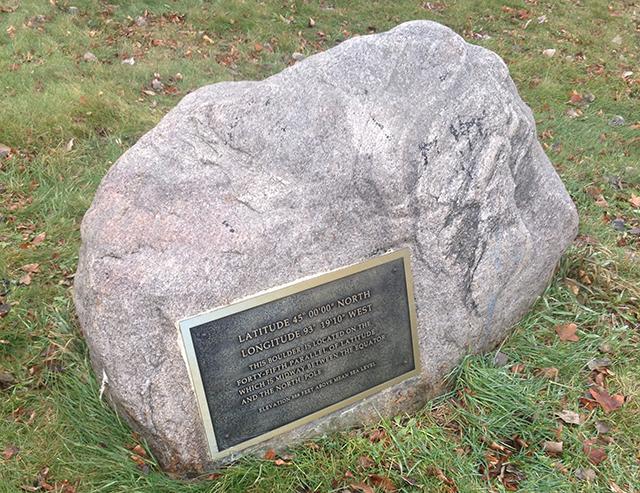 The one in Minneapolis – actually, a few dozen feet over the line in Golden Valley – is the oldest. It’s located on a small plot of land bisected by Theodore Wirth Parkway and Golden Valley Road, on the northern tip of Wirth Park. In 1917, the Minneapolis Parks Board moved to send out Theodore Wirth personally to figure out where the line was exactly, and have him erect a temporary wooden marker. The marker was replaced by a boulder and plaque at some point after that – I’m unclear on the exact date, but the marker on the boulder is mentioned in the 1938 Works Progress Administration guide to the state. The plaque acquired a lovely green patina over time, until it was replaced with a newer and shinier plaque several years ago.

This boulder is located on the

which is midway between the Equator

and the North Pole.

An interpretive sign on the Grand Rounds trail nearby has a directional arrow pointing north to the North Pole and south to the Equator, noting a distance of 3,109 miles in both directions. 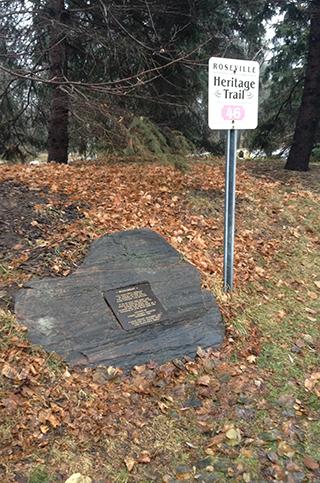 As noted, the line is invisible, so it’s hard to follow it exactly east to the Roseville marker. Roughly, you’d take Broadway across the river and through Northeast, cut south on Industrial Boulevard to get around 280, and go north again to get back on Roselawn Avenue. The marker is located just east of Cleveland Avenue, north of a short cul-de-sac called Loren Road. It’s on a sidewalk, not far from someone’s corner lot.

of north latitude on

the surface of the earth

runs through this boulder.

It is an east and west line

which is exactly one-half

the distance between the

Equator and the North Pole or a

I like Roseville plaque’s description a little better – without getting too technical, it’s a little clearer on the idea of the latitude line, and it includes the specific mile figures in either direction. The idea of the surveyor, too, is a charming one. I can only hope the placement on the part of Ramsey County was a manifestation of some east metro/west metro surveying one-upmanship (“By gum, if Hennepiun County has one, we should have one, too”). The plaque was, like its west metro counterpart, replaced with a shinier and newer model a few decades later – this one in 1994 by the Capitol Area Land Surveyor’s Association. 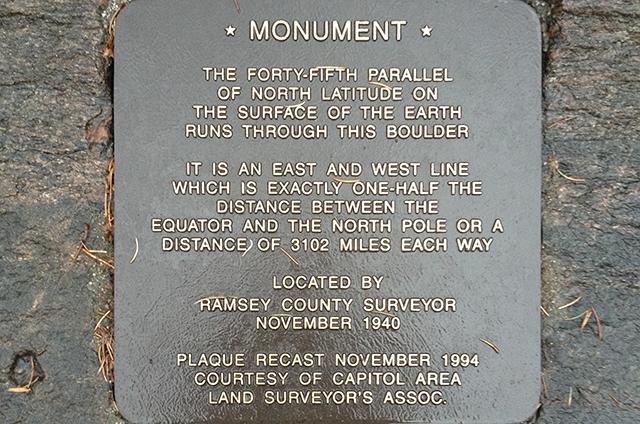 Back to the Eastern Hemisphere. The line doesn’t technically run through Turin, but through a municipality immediately to the south, Moncalieri. A website called the Minnesota Museum of the Mississippi runs a comprehensive roundup of 45th parallel markers around the world, including those in Turin and Moncalieri (“In small towns and along country highways the 45° traveller will find simple road signs and elaborate stone markers alerting all passersby to think about how these particular places are connected to the rest of the globe, and by extension to our place in the entire cosmos,” reads the text). Among the photos it feautures, the site includes a shot of the floor of Moncalieri’s 45 Nord Shopping Center, whose design marks the very line. 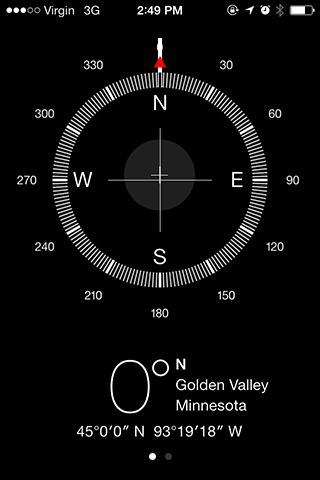 So on that note, and as a community service, I’ll make note of selected buildings and businesses in the Twin Cities with the 45th parallel running more or less through the middle of them. (In case anyone wants to, you know, paint a line on the floor.) They are, from west to east: Yuan Yuan Chinese Restaurant on West Broadway, the Salvation Army on Lyndale Avenue North, Cliff-n-Norm’s Bar (formerly Halek’s) on Washington, both Bottling Houses at the Grain Belt Brewing complex in Northeast, (diagonally right through the middle), Sheridan School, Logan Park, the offices of Smart Set Digital and Print Design, Continental Clay Company, Boyer Trucks of Lauderdale, Roseville Lutheran Church, Edgerton Elementary in Maplewood, and the Maplewood Moose Lodge.

Returning to the notation on the Roseville marker, the idea of a professional surveyor locating the line calls to mind some exertion of effort. These imaginary lines are, in a smartphone and GPS-connected world, quite a bit more visible today than they were even 10 years ago, and certainly in 1940. One of the most enjoyable parts of the visit to both was pulling out my iPhone and opening the compass app. Standing over the boulder and trying to hold the phone in the exact right position facing the North Pole, the text on the screen registered a perfect 45° 00′ 00″ North.

Addendum: The names of several fine local businesses named for the forty-fifth parallel have been added since the piece was published, as well as a reference to a third marker sign near Medicine Lake. Thanks to all the readers who pointed these out.