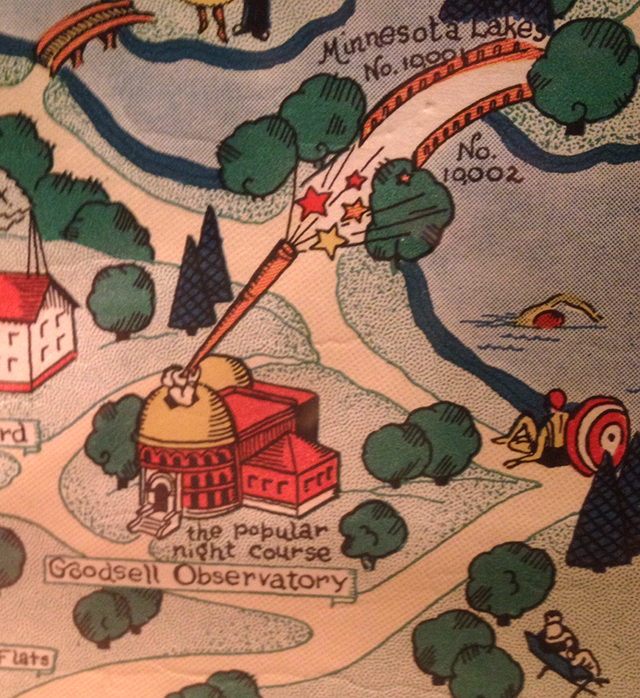 On a clear night in Northfield, walking down Third Street just a few blocks off Carleton College’s campus and the main drag of Division Street, you can see a remarkably full range of stars overhead. The skies over Northfield, that self-proclaimed bastion of cows, colleges and contentment, provide a nighttime display that’s quite close to the night skies of my exurban youth, before the dairy farms around my childhood home were transformed into shopping centers. I look up and remember constellations I hadn’t thought of since the last time I went camping.

Those night skies are an important part of the college’s history. The campus of Carleton has no shortage of buildings that look like perfect expressions of the 19th century collegiate ideal. In my opinion, however, the most captivating of them all is the Goodsell Observatory. Right on the northeastern edge of the campus, two silver domes protrude from the top of a red brick academic building, each housing an 8” and 16” telescope, respectively. These telescopes are still regularly used and maintained beautifully – magnificent artifacts of an exciting time for scientific inquiry. There’s a monthly open house where you can see them in action.

The Goodsell was a major observatory in late 19th-century America, in this big-sky part of the country, the focal point of an important center of study for astronomy – and, owing to Northfield’s status as a rail hub, a center for the sort of precise cosmic timekeeping needed to keep the trains running. A history of the Goodsell on its website lists superlative after superlative for the facility: “It set time for all major railroads from Chicago to Seattle. It published the leading astronomical journals in the country. It was home to one of the nation’s first state weather systems.” (The entire history is fascinating and well worth reading.) 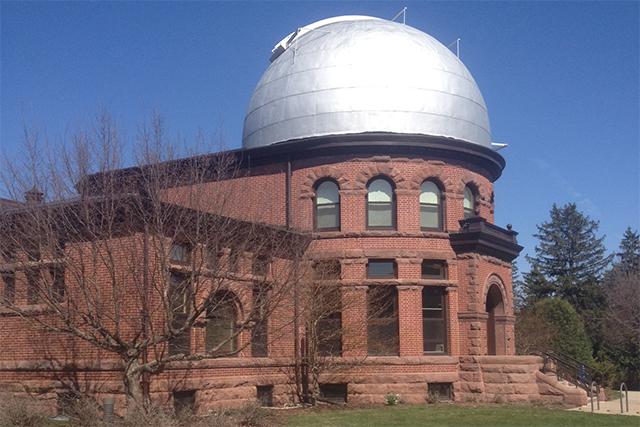 MinnPost photo by Andy Sturdevant
The Goodsell was a major observatory in late 19th-century America.

A few buildings over from the Goodsell, the documentation of this distinguished heritage is stored at the Gould Library. Some of the most interesting documents in this body of work were exhibited in the library several years ago in a show curated by Margaret Pezalla-Granlund, as part of an Art in the Library program highlighting interesting aspects of the collections. (Quick sidenote/disclosure: I am artist-in-residence at the library this week.) Over the course of about a week during the opposition of 1892 – the “opposition” refers to one of the regular periods in which Mars is closest to the Earth, on the exact opposite side of the horizon from the Sun – Professor H.C. Wilson made a series of drawings of the canals of Mars, observed directly from the observatory’s 16” telescope. These drawings were published in the journal Astronomy and Astro-physics, edited by Wilson’s Carleton colleague William Payne. “On a few nights,” he reported, “we were able to make out not only the prominent markings but some of the ‘canals’ of Schiaparelli.”

Courtesy of Carleton
Professor H.C. Wilson made a series of drawings of the canals of Mars.

The idea that there were canals on Mars was deemed, during this era, “the most sensational astronomical discovery of the 19th century,” according to one of the theory’s most enthusiastic backers, the British naturalist Alfred Russel Wallace. The word “canal” – which Professor Wilson throws in scare quotes – is translated from the Italian word “canali.” That’s the name given to supposed features of the Martian landscape first seen a decade earlier by the Italian astronomer Giovanni Schiaparelli, whom Wilson references. Schiaperelli reported long, straight lines on the surface of the planet in 1877, when seen through a telescope. The word “canali” is translated into English as “canal,” but it can also mean “channel.” The difference between the two words in English, of course, is that one designates a human-made aspect, while the other more generally designates a natural feature. (In Italian, those famous waterways in Venice are also called “canali.”)

There was some debate over whether these supposed canals or channels were natural features or not, but a large contingent of scientists believed, for at least a few years, that Martians were responsible for building the canals. It appeared to be a civil engineering project, the work of a race of Martian civilization builders, potentially ready to communicate with the Earth. “They would be fourteen feet high,” writes an anonymous editorialist in Chamber’s Magazine at the time. “This would make their strength very great. … We should expect that that Martialites have executed large engineering works; perhaps also their telescopes are much superior to ours, and we have been the objects of interest for their observers.”

Wilson’s drawings have a charming, nearly amateur quality to them – more poetic than scientific in their rendering. “The seeing on this night,” Wilson writes, almost by way of an apology, “was for a time excellent but became poorer before the drawing was completed.” They look very much like science fiction – like waterways, connecting vast, dark oceans together in a network of irrigation infrastructure, giving life to a distant planet and its inhabitants. Wilson makes notes of the specific canals observed by name – Titan, Tartus, Nectar, Ambrosia. He references other features of the Martian landscape, like Libya and Hellas. These were names originally given by Schiaperelli, invoking parts of his native Mediterranean landscape. The overall effect, writes historian and geographer K. Maria D. Lang, was “casting Mars as a familiar, Earth-like world.” Returning briefly to that anonymous Chamber’s editorial – “perhaps also their telescopes are much superior to ours, and we have been the objects of interest for their observers” – we can extend that notion to its most extreme conclusion. Imagine a Martian Carleton, with its own Martian Goodsell Observatory, and a 14-foot-high Martian Professor Wilson looking right back at his Earthling counterpart, and at Carleton’s artificial Lyman Memorial Lakes, the campus’ own small-scale public works canals right next to the observatory.

Wilson is also careful with his language, though – he writes in such a way that I doubt he was thinking of Martians. He notes “so-called seas,” and writes with some potential skepticism about the fact that his images “differ so much from Schiaparelli’s maps that it is difficult to identify the features drawn with those in the map.” He’s not a sensationalist, but assuming the mantle of an objective observer, simply peering through his telescope in Northfield and diligently recording what he sees in a sketchbook.

Scientific belief in the phenomenon of the canals is short-lived; in the immediate decades following Wilson’s drawings, consensus among most astronomers was that there were no canals of any kind on the Martian surface. The belief had mostly died out by the early 20th century. It’s true that Wilson’s drawings differ greatly from Schiaparelli’s, and even from many of the other contemporary depictions of the Martian canals. It’s still not clear what Wilson and his colleagues were seeing – potentially the edges of canyons, or some other optical illusion. 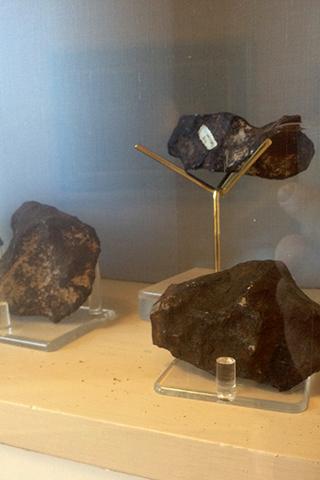 MinnPost photo by Andy Sturdevant
Meteorites in the lobby

The Goodsell today is home to a few academic departments and some distinctly Wes Andersonian classrooms (how many of us, after all, could boast of language classes in a space observatory). The circular lobby, right under the largest telescope, contains a wood display case in the center. This case houses a collection of meteorites, labeled and presented in the wildly modest manner consistent with the standards and practices of the pre-edutainment era. The largest of these meteor fragments was donated by an alum who would go on to become a wealthy securities trader, but began, in an improbably Horatio Alger fashion, as a janitor at the Goodsell with an interest in astronomy and a supportive professor.

All in all, there are more than 60 meteorites on display, from a number of meteor falls in the American west. The nearby didactic makes note of the fact that they represent “one of the most complete college collections in the United States.” It’s another small testament to this campus’ outsize role as a center for American astronomy, observation and timekeeping – in the very romantic words of an early astronomy journal on campus, a sort of sidereal messenger to the rest of the United States.