How do we commemorate a beloved building that’s been demolished to make way for something new? That’s easy, because we do it all the time: We keep it in the collective memory, in archival photographs, and around various types of media, whether TPT specials or the Museum in the Streets. When you pass by, you point out the sites to people who might not remember them, and lament what’s been lost.

What’s less commonly considered, though, are the noteworthy buildings that manage to survive the wrecking ball, but for a variety of reasons end up simply becoming invisible. They’re absorbed into urban fabric around them. They’re not forgotten, necessarily, but they’re also not specifically denoted or celebrated. A few years ago, I met a photographer from New York who’d come to town to document famous music venues around the Twin Cities. She asked me if I thought it’d be possible to shoot the interior of Jay’s Longhorn, the celebrated punk venue located in downtown Minneapolis. I told her to forget it, since I was completely certain Jay’s had been turned into the inevitable parking lot sometime in the 1980s. If it hadn’t been, there’d be like a plaque there, right?

Of course, I was wrong on that one. As Jim Walsh reported in MinnPost last month, it’s still there – locked up and painted black and squashed underneath a parking ramp, but recognizable nonetheless if you look past all that. 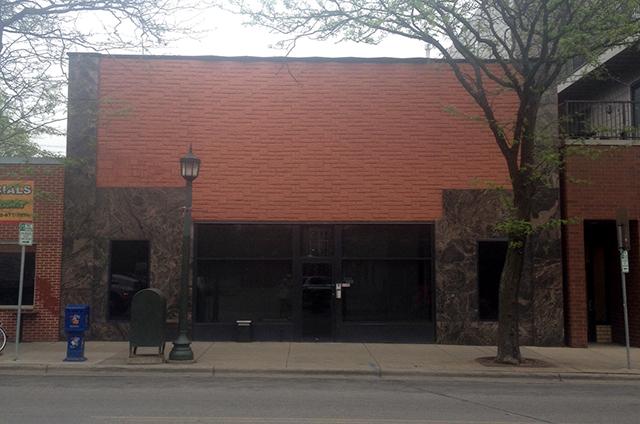 MinnPost photo by Andy Sturdevant
2541 Nicollet Avenue: now a largely windowless brick-and-marble façade in the middle of the block.

Another building that’s played an outsize role in the Twin Cities’ musical heritage is likewise hiding in plain sight, unmarked and invisible unless you’re looking for it – 2539-43 Nicollet Avenue, once located at the now-vanished address of 2541 Nicollet Avenue. That’s the street number associated with the largely windowless brick-and-marble façade in the middle of the block, and the Pancho Villa Mexican restaurant next door, the one where you drink for free on your birthday.

Over the last century, it’s been the site of a movie theater, a handful of recording studios, and at least two record independent labels. The theater on the site was a typical, unremarkable neighborhood movie house from 1913 to 1950, the kind of place where you’d take a streetcar to see double features starring Wallace Beery. The recording studios and record label offices were all, in their own way, critically important to the identity of Minneapolis and the Twin Cities. 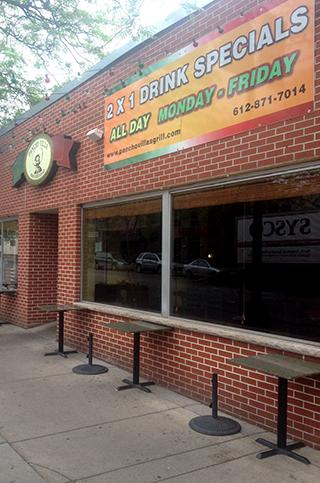 So while the building is not physically remarkable or distinguished from the other low commercial buildings that line the avenue around it, a quick search around the Internet shows it’s certainly not forgotten. In fact, you’d turn up a few dozen very in-depth pieces about the space. The building has meant so much to so many different people, this information tends to be broken into a few eras: its time as a neighborhood movie theater; second, its run as Kay Bank Studios in the 1960s and birthplace of some of the great trashy garage rock hits of the era; and finally, its time as the home of Twin/Tone Records as well as the band Hüsker Dü in the 1980s – Hüsker Dü’s offices on the Pancho Villa side, the label’s offices and Nicollet Studios in the old movie house.

It doesn’t look much like a movie house until you look closely – the high, windowless brick expanse above the door is exactly where a marquee would go. The marble accent on the side climbs the edges of the building in an appropriately glamorous way. Aspirationally dubbed the Garrick Theater for the famous English actor in 1913, that name was filched by another, fancier theater downtown in 1915, after which the theater became the much more modestly named LaSalle. It closed in 1950, as many one-screen movie theaters did after World War II in the face of an expanding menu of home entertainment options.

Movie houses are tricky places to try to reuse. What can you do with such a large space? A young audio engineer named Bruce Swedien had an idea five years later: make it a recording studio. Swieden recorded mostly jazz there – some national acts like Art Blakey and Herbie Mann – and would go on to have a very distinguished career working with Quincy Jones, among many others. Jon Bream wrote a very touching piece in the Star Tribune two years ago about Swieden’s return to the space for the first time in over five decades.

“I built those doors,” Swieden says, pointing with pride to the studio doors. “If you look carefully at them, you’ll see they’re very solid, very thick.”

After two years, Swieden left town to work for RCA, and sold the building to a local businessman named Vernon C. Bank and two business partners who sold jukebox equipment and ran a small record label called Soma. Bank opened a studio in the space, named it for his wife, Kay, and initially concentrated on recording jazz, country, R&B and polka.

As the cultural landscape was changing, however, Kay Bank and Soma discovered that the Twin Cities was full of bored teenagers banging out three-chord rock in the two-car garages of the greater metro area. Kay Bank was ready to take advantage. In a set of figures related by numerous books, magazine articles and websites since, the studio had the best deal in town: $495 would get you three hours in the studio, a thousand 45s, and promo packets sent to 50 Midwestern radio stations, according to a 2005 City Pages article by Tom Herber. That’s a little under $3,800 in present-day dollars; not a small sum of money, but definitely within the reach of four guys working part-time jobs and saving up their paychecks. Soma released many of these groups on its label.

That package paid off for a few acts. At least two of the greatest and unique anthems of the time came out of Kay Bank on Soma: “Surfin’ Bird,” by the Trashmen, that demolition derby reimagining of the Rivingtons’ “Papa-Oom-Mow-Mow,” and “Liar Liar,” by the Castaways, one of the great falsetto shrieking vocals in the annals of pop.

The studio folded in the late 1960s and went through a number of iterations in the 1970s until 1983, when local independent record powerhouse Twin/Tone Records moved in. The offices were located upstairs, and the Nicollet Studios were downstairs in the old Kay Bank space. The address was a familiar one to anyone stuck in a small town or suburb, and ordering records and cassettes via mail order from that address: 2541 Nicollet Avenue, Minneapolis, MN 55404. In the pre-Internet age, an iconic address was your only tangible link to a band or record label’s existence, especially if they were located far away. You’d wonder what these places looked like, and you had no way of knowing.

In 1985, Hüsker Dü moved into the offices next door, the one-story brick building now occupied by Pancho Villa. The windows were apparently the same size and orientation that they are now, and the band’s desks were located where tables of birthday celebrants sit now. Guitarist Bob Mould relates the glories of office work in his memoir “See a Little Light”: He’d sit at the desk “addressing the more mundane aspects” of band life:  “monitoring record company activities, balancing the books and – my favorite — routing and booking tours. … Logistics is not artistic work, but there is an art to it and I enjoyed mastering the skill.” Next door at Nicollet Studio, some of the great records of the Twin Cities were recorded: the Wallets, the Replacements’ “Tim,” and Hüsker Dü’s last few records.

Walking by today, it’s a quiet, anonymous building, occupied by another highly regarded recording studio, Creation Audio. The street address has been changed to 2543, but it’s unmistakably the same theater turned studio.

Shortly after Hüsker Dü broke up in the late 1980s, Grant Hart wrote a song about the space, called “2541.” On the surface, it seems to be about the disintegration of a romantic relationship, but knowing that address, you can recognize it as a very ambiguous elegy for the era, and the people, events and places around it. Places, in particular, are often what bleed into our memories; we feel uncomfortable when we return to an old neighborhood or bar or workplace that we associate with difficult times. Hart, in surveying the demise of his band, isn’t looking at particular people or recounting specific actions, but taking inventory of the packed moving boxes by the front door. “Now everything is over, now everything is done,” he sings. “Everything’s in boxes at twenty-five forty-one.”

“Twenty-five forty-one,” Hart continues on the chorus. “Big windows to let in the sun.” Those big windows are still there, but you have to know to look for them.

Update: An earlier version of this piece misidentified Bob Mould as a bassist. The author is completely embarrassed by this error.