“Putting stickers up isn’t really a calculated plan,” says the artist who goes by Biafra Inc. You’ve probably seen his work somewhere around town – his name, made out in a Jeopardy-like typeface, printed black on a white vinyl sticker. They used to feature an image of Edie Sedgewick, the Warhol-era socialite and icon, but he’s moved away from that in recent years. “The problem with using celebrity/iconic figures is that people end up turning it into a fan club,” he said in an interview in 2012.

If you’re walking around and looking at your surroundings, paying attention to the nuances of physical culture in a neighborhood – well, that’s how it begins. “I do a lot of walking and I put stickers up along the way,” he says. “Living in a city like Minneapolis you have to keep in mind that someone will always see the stickers, no matter where you put them.”

Mostly, these types of stickers are on the backs or fronts of street signs, but they’ll turn up on utility boxes, metal light poles, newspaper boxes, or any flat surface that can accept an adhesive.

Sticker art is a subset of street art, involving printed or hand-drawn stickers, usually on vinyl but sometimes on other surfaces. In terms of legality, it’s closer to “posting bills,” and doesn’t carry the criminal risks involved with, say, spray-painting a brick wall. Recently, I took a walk on Lyndale Avenue in the two blocks between 28th and Lake Streets, a tiny sliver of the Twin Cities, to see what stickers I’d find. In just that two-block stretch, I counted more than 150 of them, of all sizes, textures, shapes, subjects, and level of aesthetic accomplishment.

There is an appealing lack of purity to a morass of stickers on a utility box or back of a stop sign. Stickering is the realm of artists, for sure, but the lines between art and commerce out there get as blurry as a sun- and rain-soaked Sharpie drawing on a USPS 228 label. A lot of the stickers out there are purely promotional, advertising shops or events or (worst of all) national brands. In-between the art for art’s sake and the promotional messages are a whole universe of stickers that exist also for the sake of promoting a musical group or brand or something else, but do so in a way that’s so ambiguous or obscure they don’t register as traditionally promotional objects. 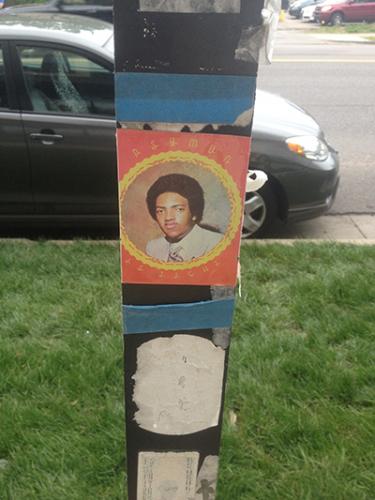 MinnPost photo by Andy Sturdevant
“Psymun is light,” it reads, in a typeface that’s so scrupulously artful it’s only just legible.

Take a sticker for Psymun, a local electronic artist, posted to a parking meter a block north of Lake Street. “Psymun is light,” it reads, in a typeface that’s so scrupulously artful it’s only just legible. Stickers like this are invisible to 95% of the people who pass by. If you’re one of the people who knows Psymun’s work, though, you feel like you’re part of a clandestine organization – “Psymun” even sounds like a kind of cult, and so does the “light” exhortation. If you’re not aware or interested, you just pass by. A small group of people will like the design sensibility and think, “Huh, I’d better look this guy up on Bandcamp.” But it’s perhaps less a promotional item in the traditional sense and more of a secret handshake. There are plenty of forums and message boards online, devoted to documenting and disseminating information about artists working in this format. 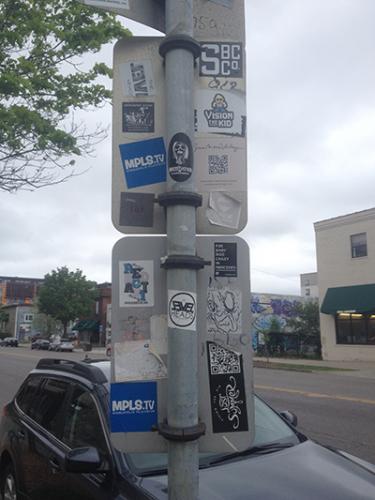 MinnPost photo by Andy Sturdevant
MPLS.TV was a multimedia collective that’s been on hiatus for a while.

An appealing thing about stickers, from the perspective of a viewer and not necessarily of a practitioner, is it seems really easy to mark the passage of time, but actually scrambles timelines in some interesting ways. Vinyl stickers are fairly indestructible, and their paper counterparts a little less so, but they still get defaced or removed or painted over, and over time, layers are created. If you have some background information, you can work out the relative ages of the strata you find. The traffic signs of Lyndale are still the final resting place for a large number MPLS.TV stickers. MPLS.TV was (is?) a multimedia collective that’s been on hiatus for a while. Anything stuck over one of those must be no older than two or three years old. But if you just moved to town or weren’t watching online videos a lot in 2012, and didn’t know anything abut MPLS.TV, you might think they were still active. 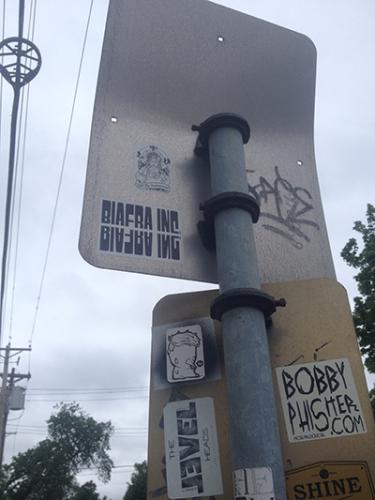 MinnPost photo by Andy Sturdevant
“For me personally, I like (and make) stickers that look like they are supposed to be on the surface.”

“The lifespan of stickers totally depends on location, quality of the material it’s printed on and what the sticker looks like,” says Biafra. In fact, it’s the stickers that blend more seamlessly into the visual landscape that last the longest. “For me personally, I like (and make) stickers that look like they are supposed to be on the surface. I like when people don’t know if it’s a manufacturing sticker or an illegal sticker.”

For years, a sticker showing a hooded guy with a cardboard sign reading “Support Broke Rappers” was ubiquitous. The sticker directed interested parties to www.interlock.cc, the online home of Interlock Records. That URL has been dead for a few years, and I can’t tell if Interlock is still an ongoing concern. It doesn’t look like it. But the stickers are still out there, years later. I see fewer and fewer them every year. The stickers with URLs are particularly susceptible to this analog version of link-rot. “P.85 Baby Ride Crazy in Mercedes” notes one, a minimalist little advertisement for a design group called P.85, but the link it provides is dead, and has been for years.

Physical culture lasts a lot longer than its digital counterpart. Websites come and go, and they aren’t always archived before they do go. “The Web dwells in a never-ending present,” Jill Lepore wrote in her New Yorker feature on the difficulties and challenges of Internet archiving earlier this year. “It is — elementally — ethereal, ephemeral, unstable, and unreliable.” Even the Wayback Machine, the most comprehensive online archive, has only two records of P.85’s existence, and it’s just parked domain notifications. Otherwise, no record of any of their activity online. Those P.85 stickers will be around years after the proprietors of the firm have moved on to other professional activities. Compared to the ephemerality of the Internet, the ephemerality of the humble street sticker seems geologic in scale.

“It’s fun to see stickers that have been up for a long time,” Biafra says. “I have friends that used to put them up or moved out of state, and it’s fun to see their stickers still posted up. It always makes me smile.”

The more ambiguous ones retain some power over time. For a while, someone had printed up a huge number of stickers that read “I __ MN,” giving whoever an opportunity to throw into that blank space whatever laudatory, ambiguous or damning words or images they thought about when they thought about Minnesota. They weren’t notably well-designed, but it was an interesting, engaging idea that made them fun to hunt down and mentally catalog. 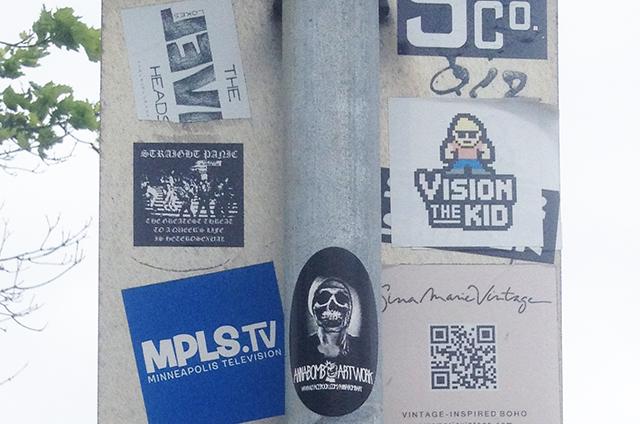 MinnPost photo by Andy Sturdevant
The current reigning champion in terms of ubiquity is probably Vision the Kid.

The current reigning champion in terms of ubiquity is probably Vision the Kid. I counted almost 20 between Lake and 28th Street. Vision is a local rapper by way of Milwaukee, and there is hardly a city block in Minneapolis without one of his square stickers affixed to some flat surface on it. Or it certainly seems that way. Part of it may be that the design of the stickers itself is really strong: a short, blonde figure (presumably Vision himself) rendered in 8-bit form, looking like the protagonist of a Nintendo forward-scrolling adventure game of the early 1990s. “Vision the Kid,” it reads. No URL, no email, no copyright or trademark or other visual fluff. Just an iconic image.

When asked about the difference between stickers made for commercial purposes and those made for art or for fun, Biafra makes these distinctions: “I think it’s all part of the conversation. I would say generally stickering is a fairly lowbrow thing. When people are throwing stickers up either for themselves, or as promotion, it’s partially because they have no other means to promote themselves or their projects, and posters and stickers are a lot cheaper than buying one billboard.

“I think when people put up stickers artistically or for the fun of it, it’s sort of the same mindset. You want to interact with your community and make a mark, but you don’t necessarily have the skills or funding to build a skyscraper or something like that. But with a few thousand stickers, you can certainly be remembered, and I think that’s appealing to a lot of people.” 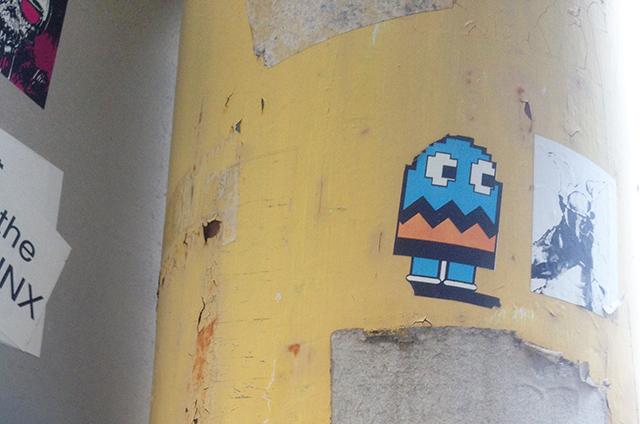 MinnPost photo by Andy Sturdevant
“I think when people put up stickers artistically or for the fun of it, it’s sort of the same mindset. You want to interact with your community and make a mark, but you don’t necessarily have the skills or funding to build a skyscraper or something like that.”

In sticker art, a universe exists between art for art’s sake and commercial promotion