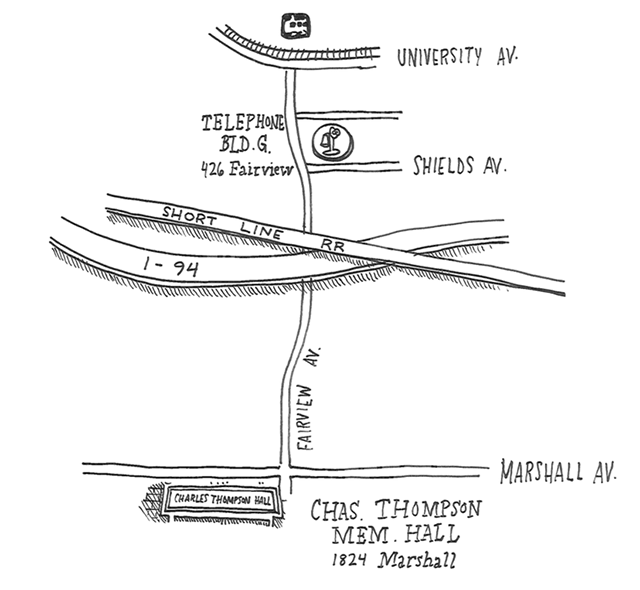 The Fairview Avenue station on the Green Line is a difficult one for me to quantify. It always seems like Fairview has less of a clear identity than the stations on either side. Snelling Avenue has the Turf Club, the used bookstore, Ax-Man Surplus, and – of course! – Spruce Tree Centre, that marvelous green tiled testament to postwar architectural extravagance. Raymond Avenue, on the other side, has Keys Café, a couple of really good record stores, the Creative Enterprise Zone, and all those nice old warehouses with artists in them.

Walk south on Fairview, though, and there are at least two attractive brick buildings along the way dating from the 1910s that have held up nicely. Both tell very interesting stories in the names carved in stone over the front doors. A building currently serving as offices for CenturyLink – identified by the legend TELEPHONE BUILDING over the front, and an image of an old-fashioned telephone – is at 426 Fairview Avenue North, one block south of University. A half-mile away, under I-94 and the old Short Line railroad on the corner of Fairview and Marshall Avenues, is the Charles Thompson Memorial Hall.

When you’re looking at older buildings, you almost expect that the names carved over the door no longer apply to the current occupant. The uses for buildings change over time; they’re re-adapted and the old vestiges are left. In both these cases, however, the names and uses remain accurate.

I can’t determine for certain that the old Telephone Building on Fairview has remained occupied by telecommunications interests since it was built in 1911. I suspect it has not. A few other uses and names appear for the address over the years – the headquarters of Lan-O-Sheen, a St. Paul-based manufacturer of soap you may remember your grandmother using. A Baha’i community center seems to have been located there at some point.

But as of right now, it’s occupied by CenturyLink. As much as it pains me to say anything nice about a multinational communications provider, I am glad they’re in there. The artwork adorning the front of the building is so perfectly suited for telephone-related purposes it seems sad to have anything else in the space. 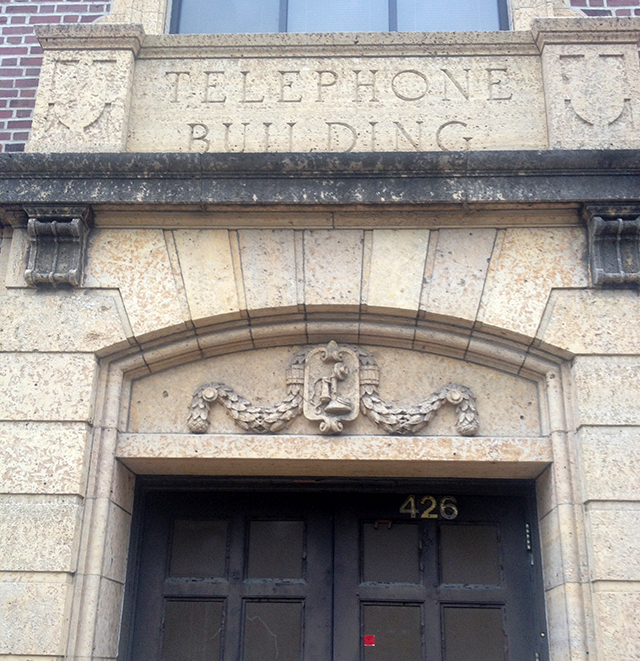 Carved into stone over the front entrance is a candlestick-style telephone, of the type cranked out by Western Electric in the 1910s and ’20s. Very rarely is a common piece of domestic technology thrust into such a heroic setting, but here we have a celebration of the telephone in bas-relief form. As much as we lionize our domestic technology today – and the smartphone is a technological marvel on par with the early telephone as far as transforming daily life is concerned – that sense of regard usually takes a more subtle form. 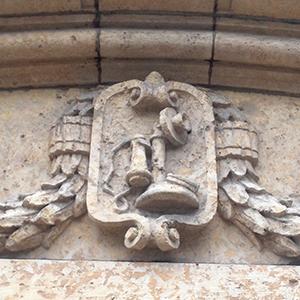 MinnPost photo by Andy Sturdevant
Carved into stone over the front entrance is a
candlestick-style telephone.

It really makes the technology of the telephone seem ancient, to see it portrayed in this way. I wonder how it was perceived at the time. The first tube-style telephone was patented in the decade before the building went up, in 1904. The candlestick phone dominated the market for at least another 10 years. It would have been a common device by then, new but not particularly cutting-edge. Perhaps it already looked dated by 1911. Or timeless? The technology changes so quickly in the 21st century that it seems unlikely anyone would be so foolish as to try to capture a specific telephone model in stone. Think about what other pieces of technology one finds carved in stone on the buildings of the Twin Cities: farm implements, wheels, mechanics’ tools, airplanes. There’s a sense of permanence in those, a sense of the technology remaining unchanged for generations. Perhaps the telephone was going to be the same – a form that would remain constant for centuries.

In some sense, that’s true. We still recognize the phone depicted in stone as a phone, though it performs none of the functions we associate with phones today.

The Charles Thompson Memorial Hall building and the institution it houses are unique in the United States. Built in 1916, the hall is a social club for the Minnesota deaf community – the only one in the U.S. that doesn’t require entry fees for members. There’s a ballroom, a bar, a parlor with pool tables, a dining hall, kitchen, children’s room, and at one time a bowling alley, all available for members of the Twin Cities deaf community free of charge.

Charles Thompson was the son of a prominent New England-by-way-of-St. Paul banking family, born in 1861 and deaf from his youth. With his wife Margaret, the Thompsons were prominent figures in the local deaf community through the late 19th and early 20th centuries. When Charles died in 1915, Margaret commissioned the construction of the club in his honor, and the family’s banking fortune ensured that access to the club would be free of charge. His name remains emblazoned over the front door: “CHARLES THOMPSON HALL.”

The architect was Olof Hanson, an old friend of the family, a native of Sweden via Minnesota and Seattle. Hanson has the distinction of being the first prominent deaf architect in the United States. He’d met Charles at the Minnesota School for the Deaf in Faribault, and had completed a few private commissions for Margaret and him. Hanson had a long and distinguished career both in architecture and in activism – he constructed numerous buildings, including schools for the deaf in North Dakota and Pennsylvania, and served as president of the National Association for the Deaf. 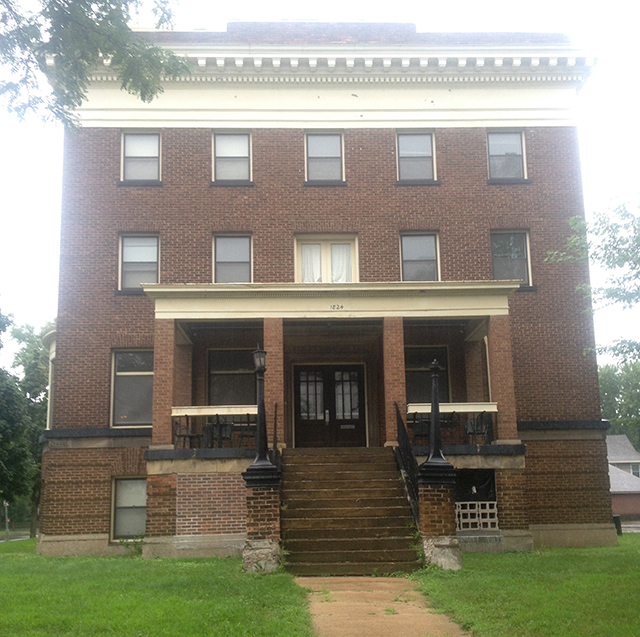 MinnPost photo by Andy Sturdevant
The Charles Thompson Memorial Hall building on the corner of Fairview and Marshall Avenues.

The building’s prominent placement on Marshall Avenue is a testament to the Thompsons’ influence in St. Paul. Thompson was a good friend of both Gov. William Merriam, for whom the surrounding Merriam Park neighborhood is named, and an acquaintance of Gov. William Marshall, for whom the street is named. On a stretch of road with no shortage of stately brick structures named for prominent St. Paulites, the hall holds its own nicely.

In fact, the 100th anniversary of the club and the building is coming up next year. Stay tuned for events and fundraisers for this unique institution. An unassuming street like Fairview Avenue will always surprise you with what can be found on it.

For more information about Charles Thompson Memorial Hall, watch this interview with the late activist and historian Douglas Bahl from 1997.