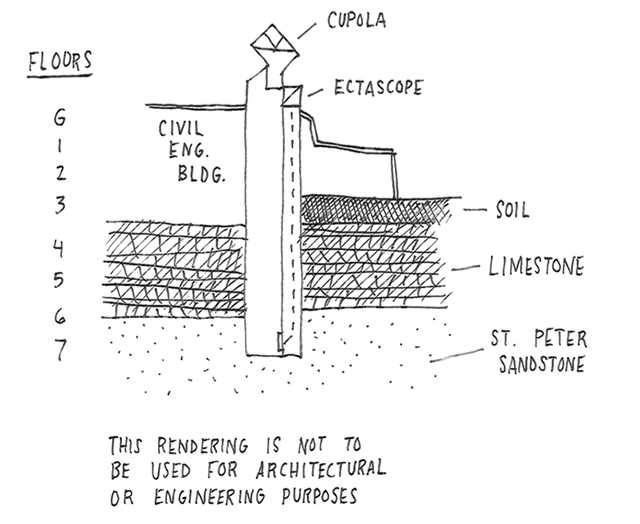 MinnPost illustration by Andy Sturdevant
The floors in the U’s Civil Engineering building go in reverse – the ground floor up above, floors one through three in a recessed courtyard, no fifth floor (that’s all a layer of limestone serving as a sort of roof), and floors six or seven at the bottom, in mined space 120 feet below the ground.

The economic, cultural and political destiny of a region – its most human factors – are shaped by its geography and geology. Take Minnesota, for example. The area’s position on a glacial plain gave it rich and deep soil, which turned out to be highly conducive to farming. Below the soil, there were enormous granite reserves, and strata of limestone and sandstone, all harvested millions of years later to create the buildings that house our governmental, commercial and educational institutions. There were enormous deposits of taconite, perfectly suited in the past century for manufacturing once the high-grade iron ore ran out – and the state’s position on Lake Superior made it possible to ship that raw material out to the rest of the country. Mining became an economic engine for the state. An industry of mining grew up in the Midwest, and to better train miners, builders and engineers, the University of Minnesota developed a School of Mines and Metallurgy in 1892. Roughly concurrently, the Regents established related departments for structural engineering, municipal and sanitary engineering, and railway engineering. Graduates working in these interrelated systems all took to the built and natural landscape of Minnesota, and engineered systems on, around, in and through it.

In 1970, these departments were consolidated into a Department of Civil and Mineral Engineering. And that department needed a building to house it.

In 1983, the Civil Engineering Building opened. Designed by David J. Bennett, it is seven stories, though not seven stories high. The building is inverted and built into the ground. When you get in the elevator, the floors go in reverse – the ground floor up above, floors one through three in a recessed courtyard, no fifth floor (that’s all a layer of limestone serving as a sort of roof), and floors six or seven at the bottom, in mined space 120 feet below the ground. These floors are below the strata of limestone, carved out of St. Peter sandstone, the delicate, almost crystalline yellow and white material you’ve probably seen on river bluffs. The building is built around two deep shafts, a pillar of rock supporting the center. Administrative offices, laboratories, classrooms, student areas and research facilities share this space. Today, the department is now known as the Department of Civil, Environmental, and Geo-Engineering. 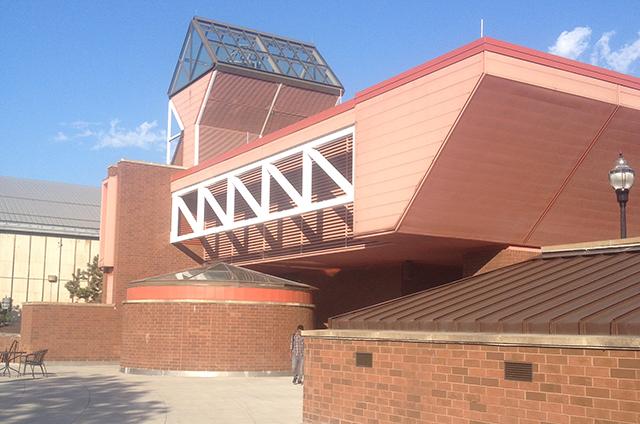 The building’s position below the earth is perhaps a sort of tribute to the mining technology in the department’s deep history. But the fact that it was underground was also a clear expression of the sense of experimentalism of the era in which it was built. The early 1980s came on the heels of the energy crisis, and at the dawn of the contemporary environmental movement. Bennett wanted to design a building that was energy-efficient, left a relatively small footprint, and lowered heating and cooling costs, among other factors.

“During the late 20th Century it became evident that human activity has the capacity to alter the natural history of the world, destabilizing the global climate and poisoning the natural environment,” he wrote later. “Setting these indisputable facts against the complex pattern of political, economic, cultural, intellectual, artistic, religious and physical human activity and the tendency toward inertia throughout human history, vested interest and institutional memory, it is impossible to predict with any certainty the impact of these phenomena on the future. But some new directions have to be tried.” The Civil Engineering Building was meant to be one of these new directions. For these efforts, the structure was awarded the American Society of Civil Engineer’s Outstanding Civil Engineering Achievement of 1983 – an achievement still noted in a patinated bronze plaque by the entrance.

The most striking feature of the building is the cupola atop. Superficially, it looks like a postmodern design flourish, but in fact it houses a solar optical system. A series of lenses and mirrors track the movement of the sun over the course of the day, distributing that sunlight into the lower levels. The idea is that, much in the same way the cold groundwater and the surrounding thermal environment would mitigate the need for heating and cooling, this passive light collection would supplement or even replace artificial light below ground. 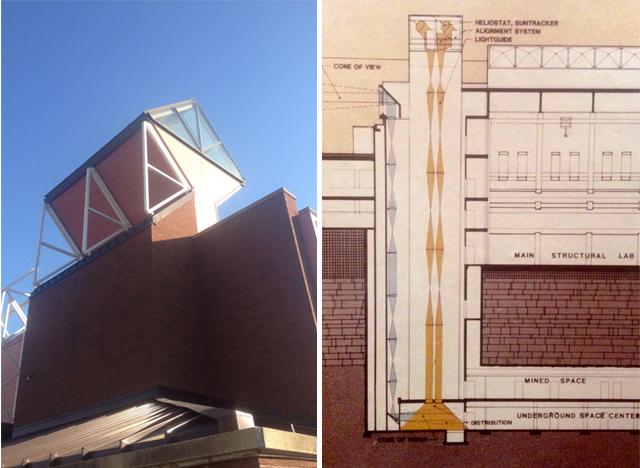 MinnPost photo by Andy Sturdevant
The cupola, left, houses a solar lighting system. At right, a schematic for that system (in yellow) and the ectascope (in blue, see below).

The building was meant to be a model for how large, complex structures could be located underground, and be pleasant places to live and work. Much in the same way that humans adapted quickly to life in high-rise skyscrapers, so too might they adapt to life in underground spaces. One set of unforeseen difficulties, however, was the fact that “the University had to learn to maintain an underground building,” as department head Joe Labuz noted when he gave me a tour of the space recently. There are obviously a whole variety of factors involved in maintaining underground buildings that don’t come into play with a standard above-ground building.

Including, of course, maintaining a solar heating and lighting array. Depending on whom you talk to, this system was either too complex to effectively maintain, or was hopelessly compromised by cost-saving modifications early on. Regardless, the light dispersal systems are now more a vestige of the building’s legacy than an active part of its operations. 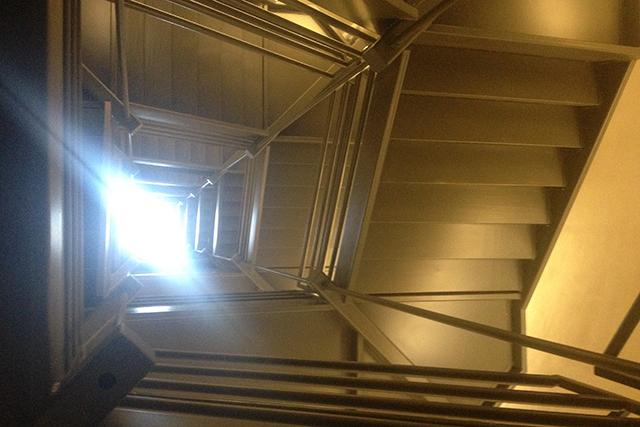 MinnPost photo by Andy Sturdevant
The light dispersal systems are now more a vestige of the building’s legacy than an active part of its operations.

But these factors are relatively minor in the day-to-day life of the building now. The business of civil, environmental and geo-engineering hums along inside those seven inverted stories; it was, in fact, extensively renovated recently. Though there are still some modest grumblings from students and faculty about leaking, the lower levels do effectively create a sense of comfort and pleasantness. There is very heavy furniture throughout; a number of the tables in common areas are made of granite and steel, some weighing as much as a ton. Though there are systems in place to reduce moisture and fight mold, and the internal temperature is cool. The lighting inside is ingenious: subtle, but placed in such a way that you get the illusion of skylights in a few places. 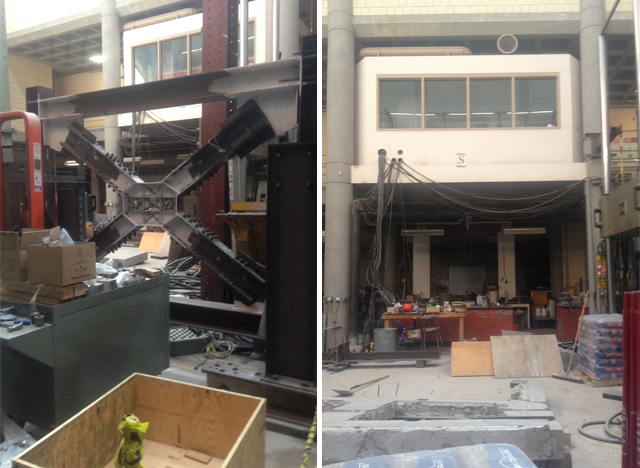 Much of the top four floors are occupied by the Theodore V. Galambos Structural Engineering Laboratory. A cavernous – literally! – facility filled with what look like enormous Erector set models, or the steel undergirding of a skyscraper shorn of its exterior. This is where structural and stability testing occurs, where giant pistons apply thousands and thousands of pounds of pressure to steel structures to test their load-bearing capacity. There’s a sort of concrete lab in one corner, where undergraduates mix up concrete for the testing. A control room is located on one wall, tendrils of cables and wires stretching between it and the sensors located on these steel structures. In the middle of the facility, hovering over the scene, is an enormous crane. Since much of the laboratory is underground, heavy items have to be lowered into it from above. And there are, as you might imagine, some very heavy items to be lowered in.

The crushed concrete structures resting along the floor makes me wonder how noisy it gets in here. “Not as noisy as you’d think,” Labuz tells me.

Also of note is a newer addition, the Minnesota Traffic Observatory. To step inside is to enter the nerve center of Twin Cities’ transportation infrastructure. Or maybe “command center” is a better term, since there’s something sort of resembling a cinematic command center about the setup. A wall occupied by projections of video feeds from MnDOT, showing crucial points along the road system in real time, dominates the room. A battery of computers, too, show maps, video feeds and charts. Each video feed is overlaid with graphics showing data related to the onscreen automobiles’ position and movement. The data come from machine vision traffic-detecting cameras placed on infrastructure like bridges along the roadways. The cameras are an unintrusive way of inventorying numbers of vehicles and noting their behavior, eliminating the need to place loops in the pavement and dig them up to replace them every few years. 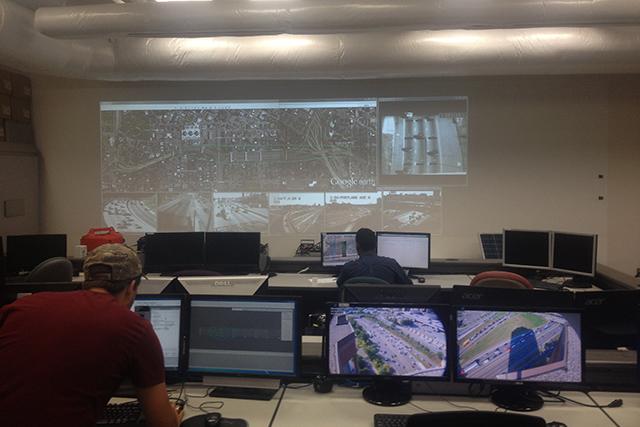 MinnPost photo by Andy Sturdevant
Inside the Minnesota Traffic Observatory.

From this data, the MTO is able to learn about and manage how traffic moves through the metro area. If you’ve ever wondered how the intervals for the ramp meter lights on freeway on-ramps were determined, this is how. Same with crosswalks, traffic lights, MNPass lanes, roundabouts – any sort of signal or infrastructure involving human behavior on the roadways is studied and recorded by the MTO’s laboratory.

A final piece of technology worth noting is perhaps one of the most audacious and one-of-a-kind engineering feats in the city of Minneapolis: ladies and gentlemen, the Ectascope.

Any type of engineering is, in at least some small sense, partially about human behavior and psychology. How will humans interact with this piece of infrastructure? Think of all those researchers in the Traffic Observatory, trying to make sense of behavioral patterns behind the wheel of a car, understood through reams and reams of data. The Ectascope is not a tool that was meant to provide any tangible, quantifiable benefit to the building’s energy efficiency, unlike the light dispersal system. Rather, it was a way to mitigate some of the negative human associations of being below the earth. It was a way to provide a window – not quite a literal window, but pretty close – to the world aboveground. The Ectascope was somewhat like a periscope, a system of mirrors and lenses located near the cupola that stretched down a light shaft, and that refracted an image of the public space outside the Civil Engineering building onto a screen in a hallway on the seventh floor. It would be a moving image close to type reflected in a mirror, completely optical in nature.

Unfortunately, the Ectascope was also difficult to maintain. The screen is still down there on the seventh floor, but it’s now blank. But it remains a testament to how the design and construction of spaces change over decades, and how these spaces – and the people who inhabit them – interact with the built and natural worlds, whether it’s traffic, bridges, steel girders or underground buildings. 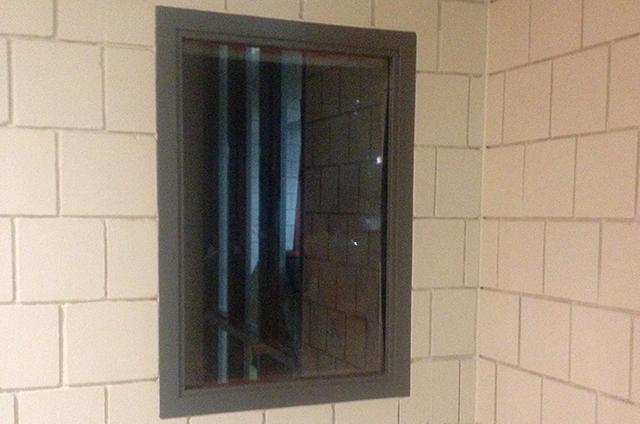 Seven stories down: U building serves as a tribute to Minnesota experimentalism