The four Dales – Southdale, Brookdale, Rosedale and Ridgedale – each sitting roughly at a different end of the Twin Cities, are the sibling act of suburban shopping centers. Southdale, the oldest, has aged gracefully into middle age since first appearing in 1956 – reliable, cautious, the high-achieving bastard offspring of an Austrian socialist, making its home prominently in the middle of the region’s toniest suburb. The middle child, Brookdale, born during prosperous times, but falling onto adversity and bled dry by younger, better-looking rich kids with names like Arbor Lakes and The Shops at West End, died a tabloid-worthy early death in 2010 at the age of 48. Rosedale, the other middle child and product of the 1960s, has reliably and quietly held down its part of the world halfway between the two downtowns.

That leaves Ridgedale, built in 1972, as the baby of the family – the Zeppo Marx. What was Zeppo’s schtick? It was never quite clear. He was the handsome one. 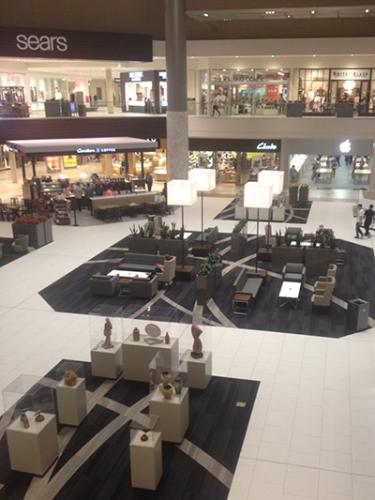 MinnPost photo by Andy Sturdevant
Ridgedale Center is, as of fall 2015, the most recently renovated and perhaps the most handsome of all three remaining Dales.

Ridgedale Center is, as of fall 2015, the most recently renovated and perhaps the most handsome of all three remaining Dales. Located between two wealthy suburbs, and boasting a chic new Nordstrom as an anchor store, Ridgedale is the best argument a developer can make for the contemporary enclosed shopping mall: clean, upscale, minimal, wood-accented, the best aspects of suburban living (enormous swaths of free parking) with a post-millennial infusion of the most ostentatious parts of city living (chichi cocktail lounges). Visually, parts of the mall are, in fact, indistinguishable from certain precincts of Uptown.

The postwar-style suburban shopping mall, a model pioneered by Southdale and idealized by the Mall of America, has long been on the decline. Online retailing, various economic calamities, the decline of the suburbs and the boomers’ and millennials’ flights back to the urban core – take your pick. This decline is most viscerally portrayed on the fantastic website deadmalls.com, which catalogs the dying and fully dead enclosed shopping centers of the United States through contributed stories and photos. The story of the dying or dead mall is probably one you’ve watched play out over the past 30 years.

In some sense, if you were born and raised in the suburbs as I was, you’re never far from home: most malls were, for decades, pretty interchangeable. The malls I frequented most often growing up in Louisville were Oxmoor Center (opened 1971) and, later, Bashford Manor Mall (opened 1973). If I were filming the movie of my life, most of those mall scenes could be shot at Rosedale or Northtown, and, a few regional chains aside, it’d be tough to tell the difference. Kevin Smith’s 1995 ode to suburban debauchery, “Mallrats,” was shot locally at Eden Prairie Center. Smith had originally wanted to shoot it in New Jersey, but Minnesota was cheaper. Once you’re inside the mall, it all looks pretty much the same.

Ridgedale’s recent redevelopments have stripped away some of the old neon pink visual signifiers of the classic mallrat era — there’s a veneer of marble or wood on most surfaces, and even the few unused spaces (the mall is currently at about zero percent vacancy) are given colorful, life-size photorealistic renderings of the chic distressed-brick-interior clothing retailers that might one day occupy them. Even two of the anchor stores, JCPenney and Sears — two of the most stolid and unglamorous retailers of the 21st century — get their logos mounted on tasteful, dark wood displays in the center court that almost make them look stylish. The other two original anchors, Dayton’s and Donaldson’s, are of course long gone, but they’ve been supplanted by Macy’s and now Nordstrom.

All this expansion makes it a pretty good time to wander around the mall. The interior was last renovated in 2007, but with the new Nordstrom opening this fall, some work has been done inside. You can find a few places where the older surfaces peek through. This side-by-side is most noticeable on the floors. The new floors are quite stylish, individual marble slabs of varying sizes and shades, gridded together. Underneath, you see the oldest style of pebbled stone-style covering you probably remember from the 1990s, cut through with metallic dividers at new wave angles. That look is now off-brand. 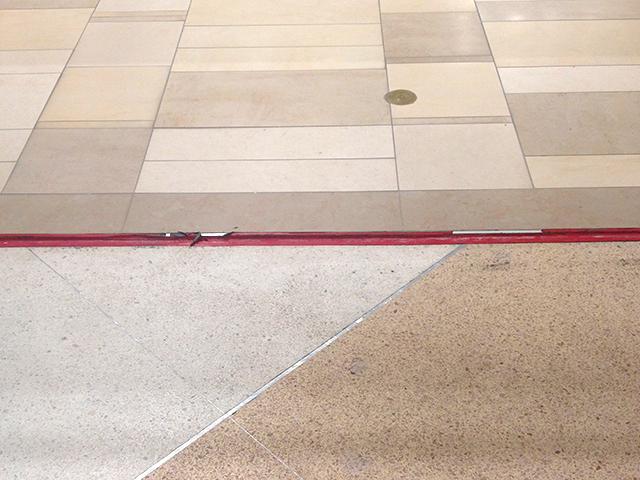 MinnPost photo by Andy Sturdevant
The new floors are quite stylish, individual marble slabs of varying sizes and shades, gridded together. Underneath, you see the oldest style of pebbled stone-style covering you probably remember from the 1990s.

A Mall of America employee once told me the thing to look for while at the mall is the quality of the floor coverings: that will tell you most reliably what part of the mall’s underlying economic hierarchy you’re in. The first-floor is always the most expensive real estate, and will always have the nicest tiling. The upper floors, where the salons, barbers and shoe stores are, will have either older or somewhat less elaborate tiling. This is true at Ridgedale. Aside from the marble, there are also wood and dark stone slabs in the common areas. Upstairs, you get a slightly less exciting, more monochromatic variation. But there’s a sense of uniformity to the visual appearance, both above and below. It says, “Look, we’re never going to match the spectacle or scale of the MOA, but as long as you’re in the western suburbs, this is a classy, fun place to come spend your time and money.” 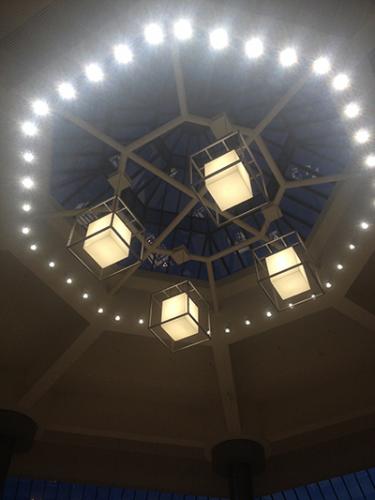 The one place where Ridgedale’s ’70s origins still come through is the center court. If you look up, you can see the glass skylight cupola, crowned by lights and decorated with four boxy, modernist chandeliers. From the inside, anything below it has been smoothed over and contained in a layer of chic understatement, but the architectural gesture is still grand and still a little bit retro-futuristic. It’s maybe the only remaining visual reminder of the ambitious postwar utopian dream of the mall as the undisputed center of the social and economic life of a community. You can still see the cupola from 394, peeking up over the enormous new Nordstrom façade. 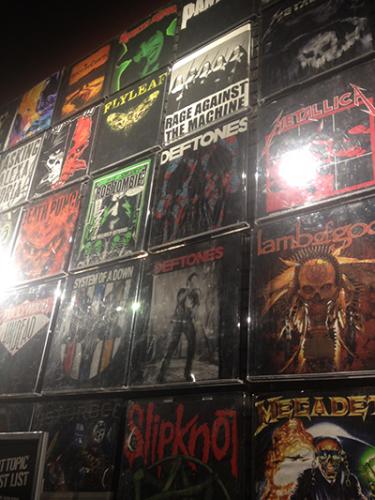 MinnPost photo by Andy Sturdevant
Any 13-year-old kid can still go into a Hot Topic anywhere in America and buy a Metallica “… And Justice for All” T-shirt.

The mall is not exactly hopping on a weekday night – in fact, the one group I always expect to find at the mall, teenagers, are nearly completely absent. The archetype of the teen mallrat, hanging out in the video arcade and sipping huge vats of soda, is not really anywhere to be found. In fact, the one-time central nervous system of the suburban teenage body politic, the food court, is more or less vanished from Ridgedale — the dining options are geared toward young professionals with a taste for brunch, martinis and sushi. Related to teenagers, however, there is a Hot Topic clothing store on the first floor. I am absolutely astounded to find the same T-shirts I remember them having for sale circa 1992. Malls may be in decline, or in a state of flux, but any 13-year-old kid can still go into a Hot Topic anywhere in America and buy a Metallica “… And Justice for All” T-shirt. How’s that for historical continuity?

Many of the common areas at Ridgedale do seem to attract small families, but there’s also a fair number of older people, sipping coffee or reading paperbacks and newspapers. The common spaces are nicer than the white plastic benches I associate with malls – plush black chairs, modern-looking couches. It is a reminder that the mall is, for many people, still a place where you can sit down and not do much or even buy anything for an hour or two. That may not make the mall a town square, but – as any former teenager born after 1960 would tell you – it does often make them an interesting place to just hang out.

A handsome new Ridgedale and the fine art of hanging out