There are so many things out there that can destroy a book. I don’t know how archivists get any restful sleep at night.

The combined forces of the natural world are uniformly bent on their annihilation, if that’s not putting too fine a point on it. Obviously, books can burn up in a fire, as happened at the library at Alexandria, an event so calamitous it’s still discussed two millennia after the fact. But less dramatically, books can mold. They can be soiled. They can decay, warp, or crack. They can be eaten by pests. They can be faded by light. Acidic paper disintegrates over time. The preservation of books is something measured in very long periods of time, so any one of these factors may not seem like a big deal in the short term, but over decades or centuries, it all adds up.

Library science, over the centuries, has devised numerous ways of keeping archival material free from light, humidity, pests and dirt. Perhaps one of the most ambitious expressions of these practices is happening 82 feet underground at the Andersen Library on the West Bank of the University of Minnesota. Two 600-foot-long caverns have been carved out of a landscape perfectly suited for them. In these caverns, millions of books, periodicals, films, artifacts and other materials are gathered in the sort of cool, dark environment that one only finds in underground caverns. One of these caverns houses the University’s Department of Archives and Special Collections, and the other houses the Minnesota Library Access Center, which holds books for other libraries across the state of Minnesota. While there are currently two caverns, three were planned, and there is room in the adjacent area for another dozen or so, if the occasion (or funds) were ever to arise to build them. 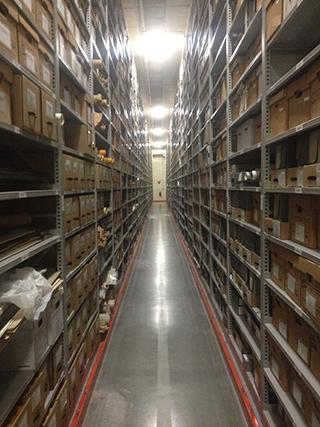 MinnPost photo by Andy Sturdevant
Walking through the high-vaulted sections of the caverns is quite an architectural experience.

Each of the special collections contained within the Andersen Library could merit its own column – the world’s largest collection of Sherlock Holmes materials, for one, or the LGBT collection, or the collection of children’s literature, or the papers of the Minnesota Orchestra, or the writer Bill Holm. But the building itself is an impressive feat on its own merits; aside from the materials within, it’s quite an architectural experience. Walking through the high-vaulted sections of the caverns, past rows and rows of 25-foot-high shelving units, the obvious visual antecedent here is the final credits of “Indiana Jones and the Raiders of the Lost Ark.” That scene, of course, takes place in a storage vault so enormous it requires an old-style matte painting to convey the scale. The enormity of the caverns and the portal that connects them to the outside world are on that cinematic scale. (There are tours of the facilities every first Friday, and so while the caverns are typically closed off from the public, you can get a tour.) 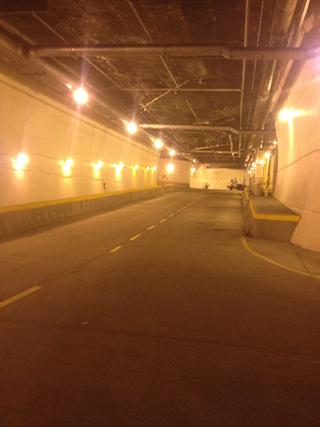 For years, these special collections – often with very modest beginnings, often the pet projects of University faculty – were flung all over the metro, in aboveground warehouses and storage facilities both on campus and in lonely post-industrial corridors. In 2000, after several years of construction, these collections were gathered under one (underground) roof for the first time in the Andersen Library, thus fulfilling a mandate from the library’s namesake, Governor Elmer L. Andersen: “to preserve the sources of information, knowledge and culture, so they can be found and passed on.”

The impetus behind the construction of the Andersen Library was the premium on space in the rapidly growing University of Minnesota campus – the same factors that led to the construction of an underground Civil Engineering building two decades prior. As with that structure, the Andersen Library takes advantage of the geology of the Twin Cities, an environment perfectly suited for a construction of this kind. Below the topsoil, the 30-foot layer of limestone creates a protective roof, and the sandstone below is easily excavated. Construction for the caverns began near the river, and the caverns were hollowed out from there. This point where construction begins serves as the Access Center’s delivery entrance – four-story doors leading to a hollowed-out subterranean structure in which four tractor trailers could simultaneously sit side-by-side with plenty of room between them.

The underground environment is perfectly suited for the conservation of archival materials: an internal ambient temperature of 57 degrees year-round, heated to 62 degrees, with a relative humidity of 45 to 50 percent. The caverns are sealed off from the outside world: A ventilation system prevents outside air from entering, and pumps protect against a 500-year flood. Lights are on timers to reduce the amount of light the collections are exposed to. Books and materials that come in are checked for mold or pest infestations, and quarantined and treated if either are found. These conditions really emphasize the “science” side of “library science.” 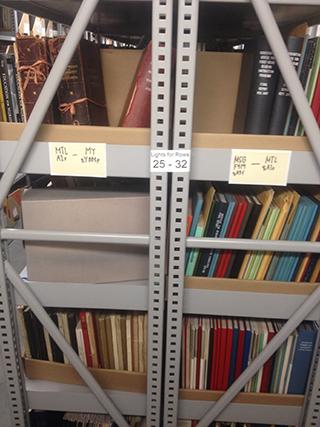 MinnPost photo by Andy Sturdevant
Books here are classified according to a model developed by Harvard, which groups books by size.

One of the most interesting aspects of the collection is in how it’s filed and organized. It’s not built for human browsing, in the sense of going to your neighborhood library branch and searching for titles grouped with similar titles. It’s simply too big to be organized in this way. The limited nature of the space, despite its size, requires a system that creates maximum density, so that 1.4 million titles can be stored in the least sprawling way possible. When one thinks of the relationship between a reader and a book, one tends to think of the Dewey Decimal System or the Library of Congress classification – systems of categorizing books according to subject, so you can find a book located near other books like it. The books here are classified according to a model developed by Harvard, which groups books by size, with each volume bar-coded so that it can be located and filed electronically. This method organizes the volumes in such a way that strips them of the sort of context a reader would understand, and instead organizes them by size, in such a way that they’re stored with maximum efficiency next to books of a similar size.

These materials are accessible to the public at any time, but they have to be pulled by librarians. The library receives a thousand requests per day, and the pick lists created for the retrieval of the volumes is structured more like a map than a to-do list – there’s a physical aspect to it, as the librarians work out the most efficient physical path through the stacks to collect the books in order. These pathways may have little to do with the subject matter of the books collected. 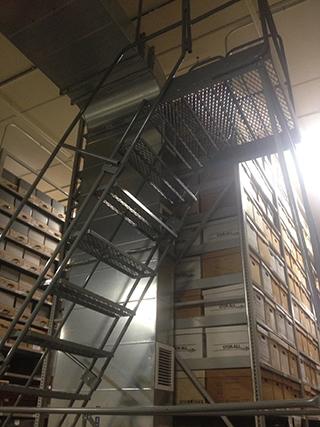 MinnPost photo by Andy Sturdevant
Everything about the caverns in the Andersen Library emphasizes the book as a finite, physical object.

Everything about the caverns in the Andersen Library emphasizes the book as a finite, physical object – an object that can be stored according to its material properties, and located physically within an environment that ensures its longevity and preservation by removing the physical factors that lead to its destruction. This isn’t the way we usually think of books. We often think of them as objects that transcend their own finite qualities and take on a spiritual dimension – go find a website with “quotes about books,” and you encounter numerous references to magic, dreams, love.

But as magical as books undoubtedly are, they’re also just pieces of paper bound together. The ideas these volumes hold are the most important part of any collection, but those ideas can’t exist unless these fragile objects can be cataloged, stored and preserved. Walking through the caverns and marveling at the scale of those shelves has a lot to do with realizing how much of the written word there is in the world, but also at the realization of how fragile it all really is.

The subterranean caverns that protect the U’s Andersen Library collections