There are two Floyd Bjornsterne Olsons in the Twin Cities. The 22nd governor – a popular, handsome semi-radical firebrand who died young in 1936 – has two very similar (but not identical) bronze statues dedicated to his memory, about 12 or 13 miles apart. The older one is at Penn Avenue and Highway 55, not far from his birthplace in North Minneapolis, dedicated in 1940. The second is on Martin Luther King Jr. Boulevard, on the western part of the grounds of the Minnesota Capitol, dedicated in 1958.

Olson’s name “reads like an immigrant text,” writes Øyvind Tveitereid Gulliksen in his book on Norwegian-American twofold identities. “Floyd is the American; Bjornsterne is the Norwegian – a rare tribute to a famous Norwegian author; Olson is the unmistakably Scandinavian-American surname.” And so Floyd B. Olson lives out his twin identities decades after his death, as the son of immigrants in a deeply impoverished enclave of the city, and as a successful governor on the grounds of the state’s seat of power, on two very different sites.

Both sculptures came from the same studio, though the original sculptor had died after making the first one. Carlo Brioschi was an Italian-born and trained sculptor who’d emigrated to the United States in 1899 – first to New York, where he’d worked on Grand Central Station, and then to St. Paul 10 years later. For a long time, the Brioschi studio was located at Milton and University, in a decorative building that still stands on the northeast corner of the intersection, a handsome brick structure that still looks exactly the way we might imagine an early-20th-century Italian sculptor’s studio is supposed to look, though it now houses a uniform supply shop – with cornices, rooftop urns, medallions depicting eagles and classical figures. Brioschi and his son Amerigo created the plaster cast of the sculpture only a year after Olson’s untimely death from pancreatic cancer in 1936. The full bronze sculpture, cast at a foundry in New York, was dedicated only two years after that, and two years after the new trunk highway running past Olson’s by-then demolished childhood home near Lyndale Avenue had been renamed in his honor. 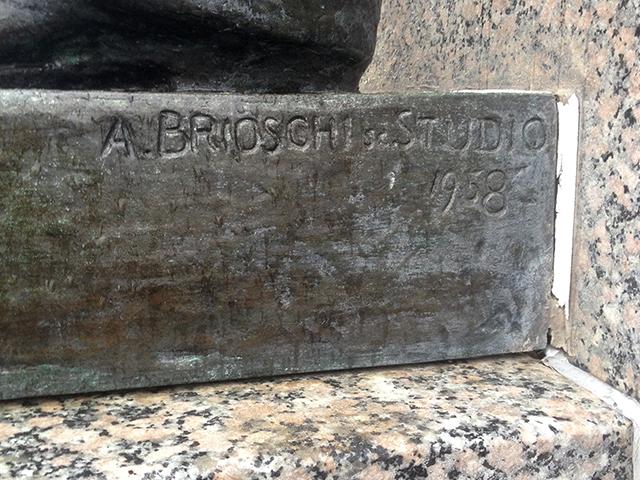 MinnPost photo by Andy Sturdevant
The Brioschi studio was located at Milton and University.

(There is another parenthetical here to mention regarding Olson, Brioschi and the art of sculpture. The two men had encountered each other at least once during their lifetimes, in 1935. Olson commissioned Brioschi to create yet another sculpture that shares his name: Floyd of Rosedale, the life-sized bronze pig that is passed between Minnesota and Iowa every year pending the result of their annual football game. Brioschi based the sculpture on the real-life Iowa pig put forth as a wager between Gov. Olson and his Iowa counterpart during a surprisingly tense 1935 football season. Floyd of Rosedale’s brother later appeared in a Will Rogers movie, making perhaps this porcine family line perhaps the most artistically celebrated in Midwestern history.) 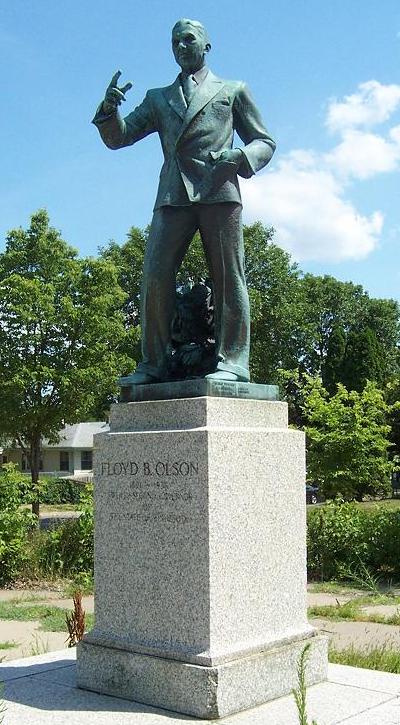 Wikimedia Commons
The sculpture of Olson on Minneapolis’ north side is shot through with symbolism and is more elegant than its more utilitarian counterpart on the Capitol mall.

The sculpture of Olson on Minneapolis’ north side is shot through with symbolism and is more elegant than its more utilitarian counterpart on the Capitol mall. In both versions, Olson has his finger raised, as if making a particularly cogent point. “I am not a liberal. I am what I want to be – a radical,” is his most famous line, but there were lots of others. Yet a better one that may adequately sum up everything Minnesotans loved (or found infuriatingly self-righteous) about him: “I find now and then when I get smug with position and perhaps inclining to forget – or if my spirits get low – I go down into the [skid row] Gateway and bum around a bit. It brings me back on my feet and puts a new fight in me.” In an era in which radio made the spoken word more important than ever, Olson had a reputation as a fiery, galvanizing orator who blended forceful elocution with a working-class northside accent tinged by the Norwegian of his parents.

While one hand is raised, Olson’s other hand rests in his pocket. It’s a humanizing gesture, one that makes him seem less a classical lecturer than a guy from down the street who’s wandered on top of a dais and begin speaking without notes. Brioschi’s classical roots show through in the features on sculpture’s base. Olson stands in front of a pile of books, atop of which sits an owl. Owls have appeared in sculpture since antiquity, usually associated with the figure of Athena, Greek goddess of wisdom, or Minerva, her Roman equivalent. The owl would seem to be a symbolic commentary on Olson’s wisdom and erudition, but it may be darker than simply that. Owls see in the dark, of course, and while this characteristic has often indicated wisdom in classical symbolism, it also frequently foretells death. The Romans were particularly keen on this interpretation, and the idea has stayed with owls throughout the course Western culture. Remember Shakesepare calls the owl the “fatal bellman” in “Macbeth.” Perhaps Brioschi is indicating Olson’s wisdom, as well as hinting at his encroaching death. 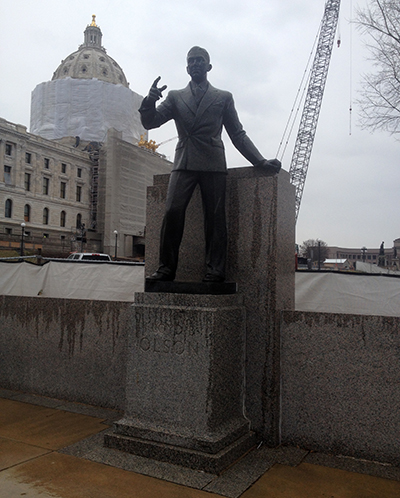 MinnPost photo by Andy Sturdevant
The Capitol statue was unveiled on Labor Day, 1958.

Brioschi himself died in 1941; the Olson sculpture was his last major commission. A thousand people came out to crowd along the parkway and see Olson’s young daughter Patricia make a few remarks about her father. Olson continued to be a popular figure in Minnesota politics throughout the 20th century. By the time of the 1958 state centennial, he was still well-loved and remembered enough to prompt state labor unions to fund a second statue on the grounds of the Capitol. That statue was unveiled on Labor Day, 1958.

Amerigo Brioschi, who took over the firm after his father’s death, completed this second sculpture. It’s slightly less idiosyncratic than the original; the books and owl have been removed, and instead Olson stands before a waist-high marble slab that suggests an architectural form of some kind. Instead of having his hand in his pocket, it rests on the ledge behind him. But clearly the younger Brioschi used the same cast, and the rest of the sculpture seems to be the same – the wide-lapeled suit, the creased pants, the pointing finger, the forceful expression. The change in the position of his hand is a minor one, but it makes a big difference in how the figure looks: This Olson seems more statesmanlike, less discursive. He seems less immediate, and more like a figure from memory, 20 years after his death. It’s Olson the icon.

Olson’s connection to his old neighborhood was at once his greatest strength and the source of his greatest controversies. Olson grew up with such legendary northside figures as Kid Cann, who’d later go on to establish an organized-crime empire during Prohibition, a period during which Olson was county prosecutor. Olson regularly clashed with journalists, many of whom accused the populist governor of corruption. When one of the most prominent and outspoken of those journalists, Walter Liggett, was gunned down in an alley behind his apartment in front of his family, Olson’s cozy ties to the suspected gunman, Kid Cann, were the source of a great deal of gossip locally. Liggett’s widow maintained for the rest of her life that Olson was somehow involved.

There’s none of that in the Capitol statue of Olson. He looks statesmanlike, as a bronze statue is supposed to. The Minneapolis version, though, is a little more human, if just because of that one small gesture. Couldn’t he be hiding something in that pocket, after all? Most written accounts of these sculptures on the Internet maintain that they’re identical. They’re mostly identical, but Olson, as his name suggests, lives out his twin identities on two very different sites, very far apart from each other: son of immigrants and powerful head of state, Norwegian and American, northsider and state capital denizen, economic populist and anti-journalist proto-authoritarian, a man marked for greatness and marked possibly, in a very quiet way, for death.

Two cities, two statues of Floyd B. Olson: The bronzes are mostly identical, but not quite