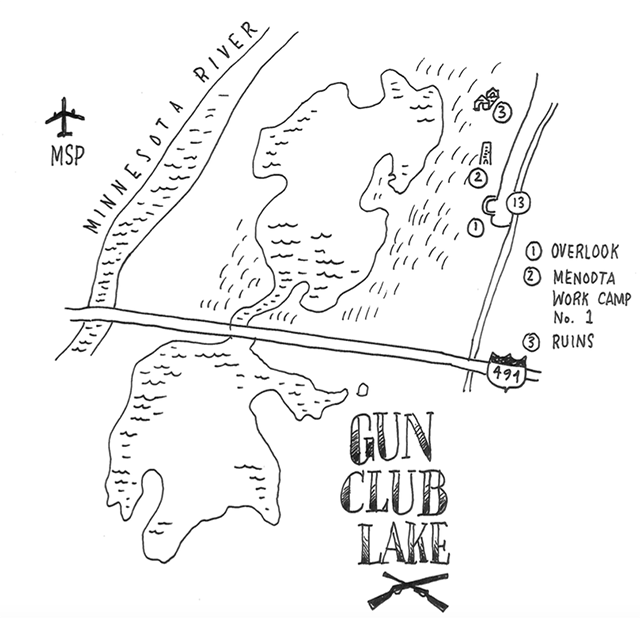 MinnPost illustration by Andy Sturdevant
Gun Club Lake. “The stretch of snow and hills with their sere marsh reeds and bare limbs to trees might have been part of a landscape in the heart of Canada rather than one within a few miles of the Twin Cities,” according to a writer in 1912.

There is not a wooden shack on the shores of Gun Club Lake filled with shotguns, at least as far as I could find. I don’t know if that’s what I expected to find or not. But the name “Gun Club Lake” on Google Maps, against that flat color palette, divorced from any physical context and wedged in the river valley between Minneapolis-St. Paul International Airport to the west and Highway 13 to the east, seemed so strange and incongruous with its conventionally named surroundings – Long Meadow, Augusta and Lemay Lakes – that it seemed worth a look. I do love a lake with an odd name.

Visited in person, however, the name starts to make a lot more sense. “The stretch of snow and hills with their sere marsh reeds and bare limbs to trees might have been part of a landscape in the heart of Canada rather than one within a few miles of the Twin Cities,” notes a writer of Gun Club Lake and the surrounding environs in 1912. The Twin Cities have encroached right to the edge of Gun Club Lake – every few minutes, an airplane streaks overhead – but the description still holds, even as Interstate 494 runs through the center of it. You can imagine hunters in waders with shotguns at their sides, at the beginning of the last century, scanning the horizon for ducks.

Gun Club Lake is, in fact, named for a gun club. The Long Meadow Gun Club had a presence in the area for nearly a century, beginning in the 1880s until the mid-1970s. Most notably, there was a clubhouse on the Bloomington side of the lakes, right on Long Meadow Lake. The captains of industry of the Twin Cities would meet for hunting and fishing expeditions, long before this stretch of the Minnesota River was part of the Mississippi National River and Recreation Area. Based on photos, it was quite an impressive lodge. It wasn’t a rustic shotgun shack filled with rifles, exactly. 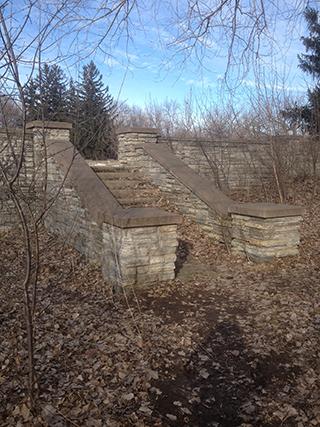 MinnPost photo by Andy Sturdevant
Rustic-style stone steps, leading down to the place where the stone was quarried.

The lake, previously known as Slater’s Lake after a 19th-century landowner, is settled into the bottom of a marshy stretch of the valley. In the early 20th century, this stretch was more or less a private recreational area for the city’s elite. The lake was dammed and flooded seasonally, creating a venue for hunting, fishing and setting nets and traps. There are a number of newspaper accounts from that time of disputes between local farmers looking to catch some carp and the landowners deputizing local police officers to keep them out. A nearby farmer named Johnnie LeBouris is said to have “looked into the law, found the lake was meandered, and as much his as the club’s.” He then packed up a bobsled with several pounds of fish and brought it to market in Minneapolis. The gun club’s response was to send in some local deputies “armed to the teeth and ready for combat.” Shooting never broke out, but the disputes gave the lake’s name an appropriately martial quality.

The trailhead of what is now the Big Rivers Regional Trail, located off Highway 13 on the edge of Gun Club Lake, is one of the best I’ve seen in the area. Built in 1938 as a Works Progress Administration project, a stone overlook sits on the top of the crest, with a great panoramic view of the river valley, with MSP airport directly ahead, and the Minneapolis skyline off in the distance to the northwest. It’s what’s called WPA rustic style, which you’d recognize from rest stops along trunk roads in your travels across the United States. The overlook was built with stone that was quarried from the immediate area, and in fact you can see the trenches in the landscape from which the stone was removed – before the gun club was established, there’d been a limestone quarry nearby. 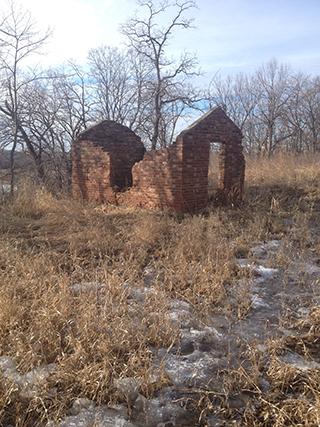 MinnPost photo by Andy Sturdevant
A little home on the prairie.

The overlook was constructed by residents of the nearby Mendota Work Camp No. 1, located onsite. A work relief program for homeless men from the Twin Cities, Mendota Work Camp No. 1 was unique in Minnesota as a camp for “transient” African-American men. The WPA was segregated racially, and Work Camp No. 1 was the only site in the state where African-Americans lived and worked in the employment of the federal government. The hundred-plus men were primarily responsible for improvements to the nearby roadways. In 1935, when the camp was built, the eight-acre site included barracks, workshops, a recreation hall, a blacksmith’s shop, and a baseball diamond, all built by the men.

The site remained a work camp through the early 1940s, but apparently, the camp was the focus of some racial animosity from nearby Mendota Township – the men were moved north to a work camp in Bemidji after a petition from local residents to have it “evacuated” was circulated soon after it opened. The camp’s population afterwards was made up of white homeless men from the Twin Cities until it closed in 1941.

Besides the overlook the workers built, all that remains of Mendota Work Camp No. 1 now is the limestone chimney from the recreation hall, as well as some foundations. The chimney cuts quite a profile against the prairie and burr oak-dotted landscape – like the overlook, it is expertly designed and built. There’s a historic marker onsite in need of some serious repair.

On the east side of the upper part of Gun Club Lake, a few hundred yards off the trail, on the edge of the bluff, there are the remains of a small brick building. Its pitched roof pokes up just over the prairie grass. You have to slog through a field of grass and shrubs (and with quite a few piles of deer pellets) to get there. The structure itself is located in a marshy area, which at this time of year is laced through with long patches of ice, like marbling on a good cut of meat. 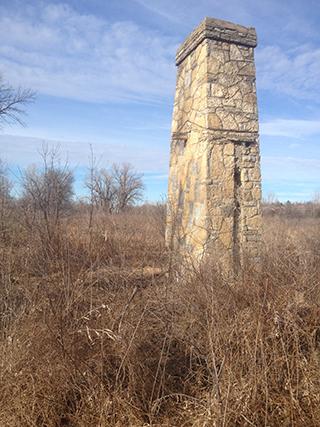 MinnPost photo by Andy Sturdevant
The Mendota Work Camp No. 1 recreation hall chimney, complete with intact fireplace. If the hall were still standing, people would pay big money to have weddings there.

It’s not too far away from the Mendota camp, so it’s entirely possible it’s part of that complex, though most of the historical evidence suggests that the chimney from the great hall is the only part remaining. These ruins look a bit older than that, anyway – a plat map of the area from 1916 lists a “house” near the spot, though it’s not clear to me who, if anyone, lived there at the time. It’s a tiny, one-room building, the roof long gone, and the east wall collapsed, but otherwise looking very sturdy.

This is such a quiet area, but it’s such a fascinating and complex confluence of factors – on this side of Gun Club Lake, you’re never out of sight of the many warehouses and shipping centers on Highway 13, including a cold storage facility, a barbecue factory (yes, a barbecue factory!), and Minnesota Knitting Mills. The trucks in and out of these sites, and the continuous air traffic overhead, are a reminder of how this region is knitted together in an international network of trade and commerce.

Standing outside the brick building and looking out onto Gun Club Lake, wondering about who’d lived there before, I kept thinking not of the economic interconnectivity of the region, but back to the lake’s martial nomenclature and its contentious history: black federal relief workers run out of town, or wealthy hunters clashing with local poachers and farmers. (And of course, Fort Snelling is just across the river, site of some of the most significant acts of violence in the state’s history.) Even a DNR sign about invasive species warns hikers walking by that the native prairie is in a constant state of conflict with buckthorn. Violence of all kinds is all over the landscape. It’s just not always mentioned when these features get names. Gun Club Lake, at least, gives you a suggestion.