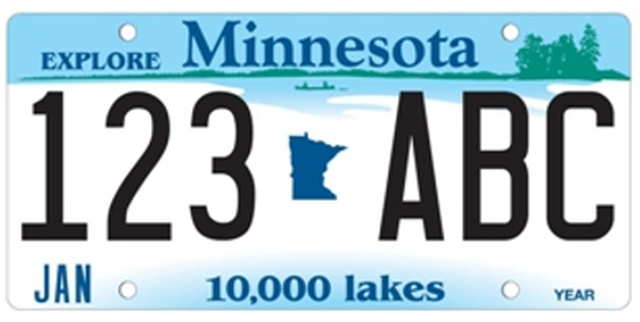 Perhaps you noticed, when rewatching “Purple Rain” after Prince’s death earlier this year, that while the landscape of Minneapolis has changed considerably since 1984, the license plate on the back of The Kid’s purple motorcycle looks very much the same as it might today: blue and white, splash of green.

If you’re sitting behind a registered vehicle on a street somewhere in Minnesota – whether a car, RV or 1981 Honda CM400 Hondamatic – what you see on the back of that vehicle hasn’t changed much for decades.

1978 was the first year a green boreal forest island and two people in a canoe materialized over the horizon of an eternally frozen lake, the legend “10,000 lakes” submerged at the bottom. If you’re younger than I am, this is the only Minnesota license plate you’ve ever known. There have been a few changes in the past 37 years – the shape of Minnesota appears in the center, the directive “explore” was added before the name of the state in the 1990s, and the numbers are now printed, not embossed. Otherwise, it’s fundamentally the same. 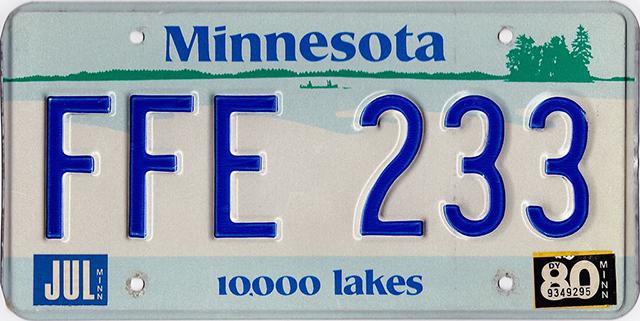 Wikimedia
An early variation on the current model.

The motto “10,000 Lakes” has appeared on the license plate since 1950. When you find a formula that works, you stick with it.

Before 1978, as with the license plates of most states, Minnesota plates tended to be utilitarian. Usually they were one color with embossed letters and numbers of a second color stamped on the front, the name of the state, year and “10,000 Lakes” included on the top and bottom. With the advent of more sophisticated production techniques, it became possible for license plates to allow for some graphic variation. That’s when you start getting those iconic license plates you probably half-remember from the pop cultural references of the end of the last of century. I’ll never forget that iconic 1980s-era California plate – not because I’d ever been to California or even seen a California license plate in real life, but because of how often the design turned up in TV shows and video games.

There’s not really enough variation in the Minnesota plates issued between the 1930s and 1970s to rank them aesthetically, if you were hoping I’d do so. (Personally, I was hoping to do so.) There are subtle variations in shape and color scheme, and if you look through the meticulously detailed Wikipedia roundup on the topic, you can see the evolution. While there are a few maroon-and-gold designs, it’s interesting to see the license plates in color schemes not typically associated with any Minnesota athletic teams, like green-on-white, or black-on-silver.

That said, I do give top marks to the plates issued through the 1950s, not in terms of color or shape, but typeface. This particular typeface is a knockout. It’s modern, easily legible from a distance, and would be stylish in any context – so it appears super-stylish in as mundane a setting as a license plate. The “3” is great, but look especially at that “6” and “9.” Those diagonals are chic and sophisticated enough to be right out of the intertitles in a silent German expressionist documentary about a factory that makes ceramic dinnerware for jazz musicians. (That’s the chicest, most sophisticated thing I can think of.) 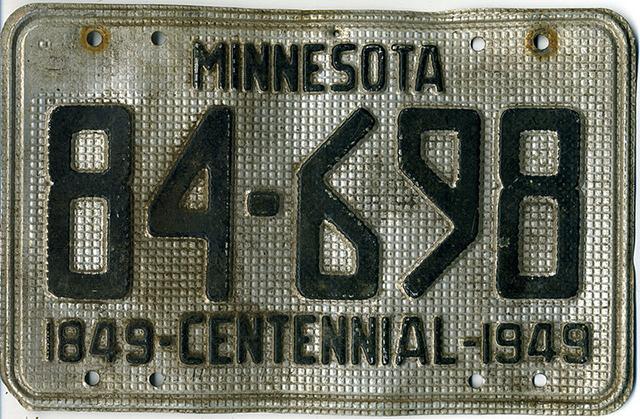 Wikimedia
The most beautiful utilitarian typeface in state history.

The current, post-1978 plate design, with the frozen lake and pine island and non-chic printed numbers, probably isn’t going anywhere, and I suppose it’s all right. It’s never won any awards – and there are awards for such things – but I admire the way the surface of the plate can read either as warm-weather lake or cold-weather snow, depending on the season. The canoe, too, can be read as paddling across a surface of water in 1978, 1878, 1778, 1678 or 1578. Or 2078, for all we know.

I find it a little dispiriting, if not totally surprising, that the design favors a romanticized rural scene with no equal time for a more common urban one. There’s no IDS Tower, WCCO radio masts, St. Paul Queen Annes or even a state Capitol peaking over the horizon line, or anything else that suggests that 60 percent of the state lives in the Twin Cities. It’s maybe a form of wishful-bordering-on-delusional thinking to consider that a rush-hour stretch of I-94 backed up from Highway 280 to downtown Minneapolis is emblazoned with thousands of tiny scenes of empty rural tranquility.

There are, besides the standard model, a few dozen specialty plates [PDF], most of which fall into a similar parks and wildlife theme. The critical habitat plates are the most common, and the most popular – motorists’ money is going where their mythology is, in this case, and a donation of $30 goes to the DNR for each one. You can choose from, among others, a loon, ladyslipper, chickadee, pheasant and two anglers in a boat. I like the deer, which first appeared in 1996, and bypasses strict naturalism for a minimalist three-color composition that reminds me of my favorite painting in the city of Minneapolis. 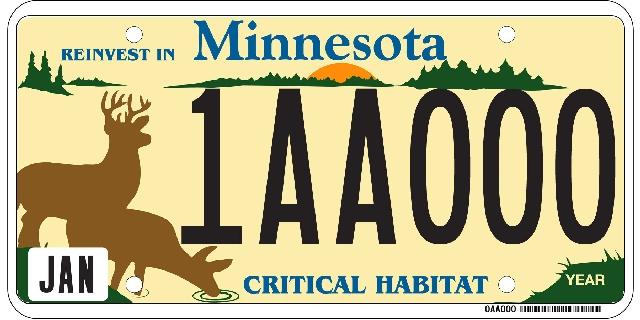 Some of the other specialty plates are legitimately wonderful and weird, though, and I’d be excited to see more of them out on the road. Some of them are very specific demographically, such as one of my favorites, the specialty plate for motorcycle-riding retired firefighters. A mere 33 Minnesotans can claim this particular combination. As a person reflexively drawn to the most arcane pastimes, I also really enjoy the Citizens Band plates, which look like standard Minnesota plates, except this “10,000 Lakes” business is chucked in favor of the phrase “CITIZEN BAND.” These plates can only be used by a licensed CB radio operator, and as of 2015, there were only 31 of them on the road. 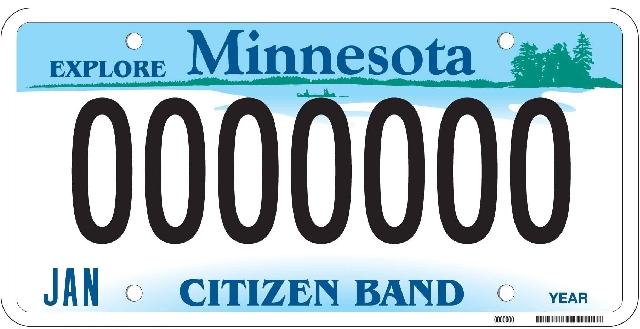 Minnesota Department of Public Safety
“Thanks for the QSO, 88 to your XYL.”

There are a wide variety of veterans’ plates. Most surprising to me was the fact that there is a special plate for Minnesotans who survived Pearl Harbor, and – even more surprising – as of last year there were still 19 of them in use out there. From a design standpoint, there’s not much going on, but just the phrase “Pearl Harbor Survivor” in all caps is impressive enough on its own merits, considering the fact that 75 years have passed.

The most inexplicable of all the specialty plates, however, is the new golf plate, unveiled in 2015, and proceeds of which go toward youth golf development. I have a few friends who are out there on the links once in a while and I don’t begrudge them a thing, and bully for all the kids out there whose golfing education has been supported by the generosity of Minnesotans’ motorists. But of all the sports played in Minnesota — golf? I hope hockey, basketball and soccer are coming along someday.

The majority of motorists opt for the classic design, though. Minnesota’s plate is one of the oldest unchanged and consistently used designs in the United States — freighted enough to be utilized both as tourist kitsch and symbol of protest.

Of course, if you have your own ideas to put out there without the graphic design imprimatur of the DMV, you can always turn over $100 for personalized plates. Lookin’ good, QUANTUM.