Not having kids of my own, there are huge portions of the public sphere I don’t really have many opportunities to experience up close. What goes on in our cities’ playgrounds, for example, is largely a mystery to me. My only guesses are based on my own outdated memories of the tail end of the galvanized-steel-jungle-gym-and-gravel era.

This past weekend, though, I attended a first birthday party for the triplets of my friends Kurt and Jen in Brackett Park in the Seward neighborhood of Minneapolis. I bike past Brackett Park on the Greenway all the time, but hadn’t really seen the playground up close, in action.

This birthday party was a good opportunity to do that: The children of Kurt and Jen’s friends were all over, taking advantage of the wide range of playground equipment and the nearby wading pool. The contemporary playground seems to me to be at once more exciting and more boring than what I remember from my youth. They’re certainly better built and more sophisticated; something like the tower of ropes, a soaring spaghetti junction of intermingled red ropes that, swarming with kids, looks much more fun than the steel monkey bars I remember. Those only allowed you to make your way in two directions – horizontally, or (more likely in my case) down bottom-first into the dirt. 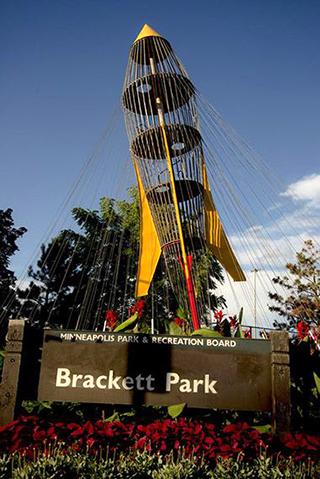 Courtesy of the Minneapolis Park and Recreation Board
“It’s as in flight as it’s going to be.”

On that note, the potential for injury seems to have largely evaporated. Kids will always find novel and interesting ways to injure themselves, but the likelihood seems lower on the contemporary playground. The gravel is mostly replaced with a softer synthetic material.

Gen-X adults griping about how safe and clean playgrounds are these days is nothing new, though, so I was curious to see how it looked from the kids’ perspective. After the party, Kurt and Jen’s 4-year-old son A. agreed to take me on a tour of the highlights of the Brackett Park playground. His dad, Kurt, grew up a few blocks away, as well, and was on hand to contrast A.’s experiences in Brackett Park with his own, making this a two-generation family story.

A. lives very near the park, so it’s a regular destination, for special events like the triplets’ birthday party, and for everyday visits. “Yeah, it’s easy. We live at [address redacted].” He gives me the address. Then he reads my computer screen, points to the word “redacted,” and sneers: “What’s that? Erase that. Write [address redacted].”

I tell him I can’t use his real address, because this will be published, and everybody doesn’t need to know exactly where he lives. He makes a face, and then agrees to a compromise. “You could just say we live near Brackett Park.” 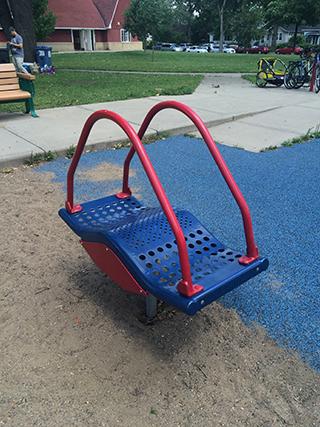 OK: They live near Brackett Park.

A., it turns out, is a sort of playground classicist. He wasn’t very impressed with the more contemporary equipment. Confronted with a red and blue seesaw variant and asked his opinion, he said, “This one, exactly, I don’t like. It just doesn’t look good.” Pressed on whether he was making an aesthetic or functional assessment, he indicated the former. “It just doesn’t look good,” he said again, emphasizing the word look.

As our conversation went on, A. revealed himself to be more of an admirer of some of the equipment than a regular user. “I just like it,” he said of the small, hobby horse-style locomotive engines. “I haven’t went on it. I just like how it looks.”

The trains pay homage to an older favorite in the playground, which Kurt steps in to describe: On the old playground, he says, “there was a concrete choo-choo train. There was an engine, a tender and two passenger cars. You could grow through them in the middle, into the engineer’s compartment, and you could climb in through the top of the tender, and when you got big enough, you could run along the top. Just like the real trains.” 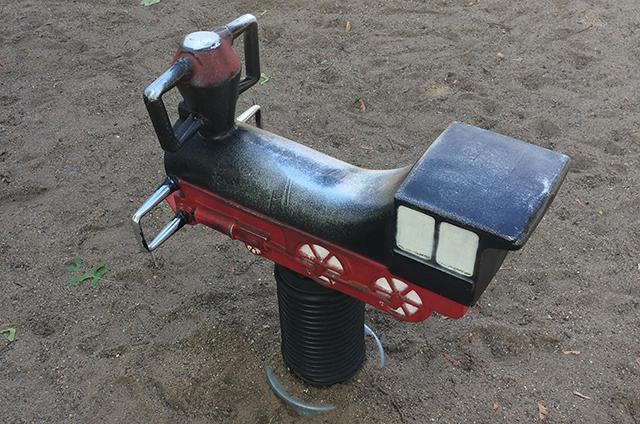 MinnPost photo by Andy Sturdevant
“I just like how it looks.”

Those concrete trains paid homage to the real thing, which were still occasionally making their way down what’s now the Midtown Greenway bicycle path in Kurt’s youth. Their whistles would still be audible from the playground to kids playing in the concrete version. They also made for extracurricular activities a little later; if not running along top of the train like Lee Marvin in “Emperor of the North,” then at least being in close proximity to the trains. “You could sneak up there through the hobo trails, and look for railroad spikes. You could look at the trestle.”

What A. does seem to like at Brackett Park are the classics: slides, swings and dirt. There’s an impressive centerpiece, with a long, yellow slide. I asked if he ever uses it. 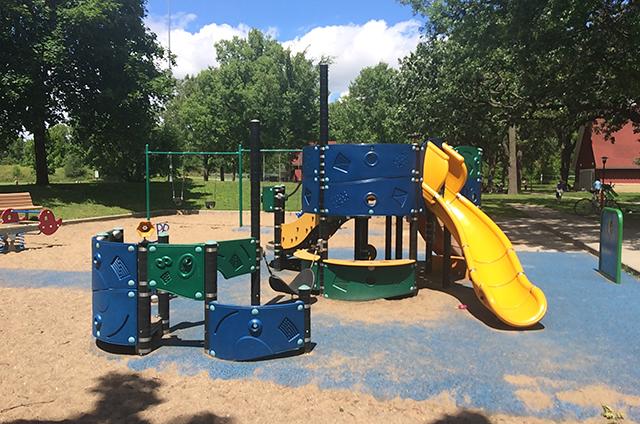 MinnPost photo by Andy Sturdevant
The yellow slide: “I really like that one.”

Again, A.’s experience is rooted more on admiration than use. “I really like that one. I never liked to go on slides. I’m too scared to go down big ones. Have you been to my Grandma Ann’s house? She has a slide that’s really short. That’s the only slide I ever want to go on.” He’ll age into that. A. is so well-spoken I sometimes forget he’s only 4 years old – still a little young for the real roughhousing to come.

The swings are an attractive amenity, though. Swing technology hasn’t changed much in the last 30 years. A. uses them enthusiastically. “Lots,” he says. “I always do it every time I go to Brackett Park, mostly. They [his parents] push me, and then they pump to keep it running. And when the swing goes still, that’s when it’s time to go home.” 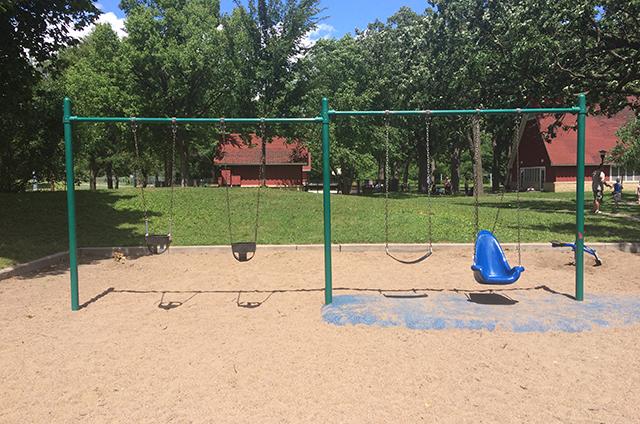 Of course, across Brackett Park there is the most iconic playground structure, one which has ascended, rocket-like, from the mundane concerns of child’s play into the rarified stratosphere of public art. That’s the Brackett Park rocket, installed in 1962 at the height of the Space Age, renovated in 1980, and saved from the scrap heap by a group of neighborhood activists in 2008.

“Everyone wants to talk about the rocket ship,” says Kurt. “That’s the main thing, that’s the big one. It used to be at the playground on the southeast corner. It sat squarely on the ground, and the hatches were open, and you could get right in there – into the nose cone at first, although that was eventually closed.”

My old colleague at The Rake, Michael Fallon, wrote maybe the definitive piece on the rocket when it was restored in 2008, capturing the sense of optimism and freedom kids felt in the ’60s and ’70s, and contrasting it with the safety of the contemporary playground. 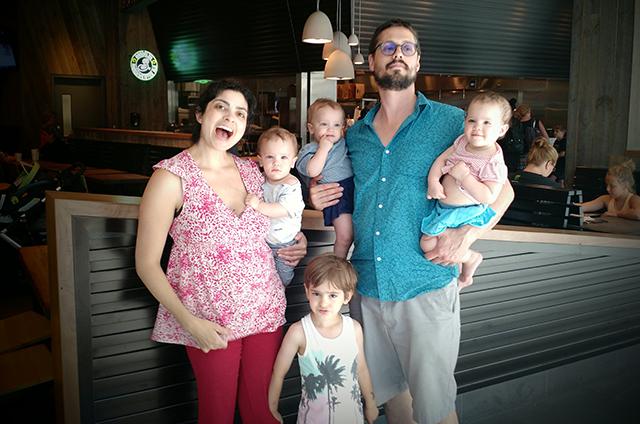 Courtesy of Kurt and Jen
Two generations of Brackett Park playground users: Jen, Kurt, A. and the triplets.

Still, many other accounts online of the pre-art-object rocket are easy to find, too: stories of kids falling off, heads stuck between the bars, shoddy maintenance, and general decay. It calls to mind that famous trampoline-via-Gone With the Wind scene from The Simpsons.

Regardless of the relative sophistication of the equipment, though, there’s always something in ample supply at any playground that even a kid A.’s age can explore and appreciate. I may have overlooked this initially, but it’s an easy one: dirt.

Some of A.’s favorite games on the playground are focused on the dirt and sand. “I like chasing people and saying, ‘You’re in jail.’ Otherwise, we just play in the sand. It’s hard to explain the other games.”

I pressed him for details, but he just shook his head. “Really, it’s so hard. That one was involving running. That’s a running game. There are others.”

Something else in the dirt grabbed his attention, though. “Do you want to see some lichen?” he asked. He pointed to some, growing on a chair. Or at least I presume it was; A., at 4, already knows a lot more about lichen than I do. “There’s something else related to lichen. It’s called moss. It’s a little bit softer. It actually behaves just like lichen, but it’s softer.”

That’s maybe the main attraction of the playground. Not the rocket or trains or slides or swings, but all that dirt and sand, and whatever else a kid might find among them on the playground.