One of the most famed poems about the city of Minneapolis ends, inevitably, with a vision of the economics of the automotive business.

“Bury me in a hole, and give me a cheer,” writes John Berryman in “The Poet’s Final Instructions,” from 1958. “Near Cedar on Lake, where the used cars live.”

The used cars may still have a home, then as now, at Cedar and Lake, but they have a wide selection of other homes, all across the Twin Cities. To be traversing the cities on foot or by car is to spend a lot of time looking at the backs of cars. This can be making your way down a street or highway and stuck in traffic, or strolling across a parking lot, or walking down a residential street past a single, unending row of parked automobiles.

All sorts of things are slapped on the back of these cars that tell you about the owners – bumper stickers, novelty license plates, little vinyl pictures of a stick-person family. One item, though, calls back immediately to the economics of the local automotive industry. It tells you less about the owner, and more about the people who sold it him or her, and the systems that made those sales possible.

It’s those dealer decals. Most cars out there have some sort of identifying graphic that tell you where the car came from. Some are die-cut vinyl, some are chrome, usually resting above the car’s make or model name. They’re little advertisements that have to accomplish the task of not looking too tacky or flashy, but also being visible enough to register with the viewer. They plant a little seed of name recognition, cultivated and nurtured by decades of continuous TV, radio and print advertising. 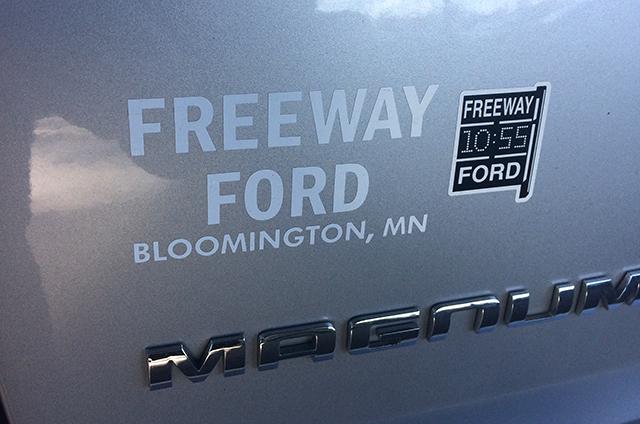 The names of car dealers, in the late 20th century, had an almost totemic quality. I’ve never purchased a car from a dealership, have no immediate plans to, and no opinions about the superiority of any one of them over any other. However, I can hum the TV jingles from the top five car dealerships where I grew up, and no doubt you can do the same. (Sing along: “We’re good people helping good people.”) That blend of ubiquity and visibility, touched with just a hint of untrustworthiness, makes the regional new and used car dealer a towering figure in the local commercial imagination, rivaled maybe only by the personal injury attorney or retired athlete-turned-spokesperson. (And unlike those other guys, the car dealers have the added disadvantage of not being able to work Sundays.) The reason people found such schadenfreude in the fall of Denny Hecker was not only the fact that he ended up confirming our most unflattering perceptions of what used car dealers are like, but also the fact that his face and that jingle and those advertisements were so deeply ingrained in the local psyche.

You still do see the occasional Denny Hecker vinyl across the back of a car. It’s Denny’s loopy, Disney-esque signature, which I suppose was meant to convey firm-handshake trustworthiness, but looks in retrospect like a manifestation of terminal self-obsession. What kind of narcissistic control freak has his personal signature on the back of every car he sells?

Most other dealers have wisely avoided this approach. Across the spread of dealer decals, there are a few patterns that tend to turn up. 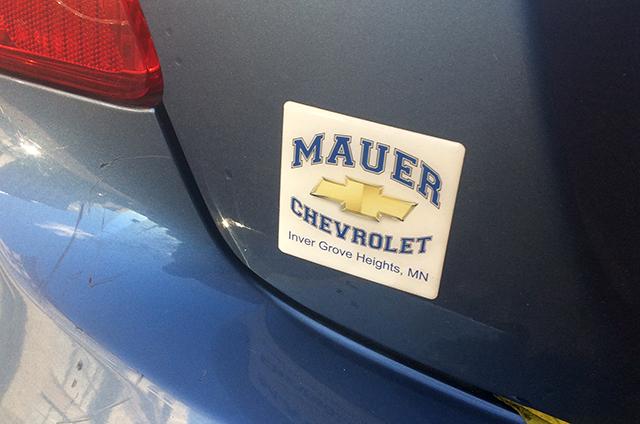 MinnPost photo by Andy Sturdevant
The baseball typeface is probably just a coincidence.

The majority of dealer decals have an inadvertently retro quality, designs that hearken back to the gilded age of the sprawling dealership on the side of the highway. For instance, the Freeway Ford sign in Bloomington, visible from I-35W and recognizable enough in the 1970s to be name-checked in a local novelty hit, shows up in its vinyl decal, its towering digital clock set eternally to 10:55.

The biggest dealerships can get away with using just their names, banking on the synapses in your brain firing to complete a connection with a jingle you’ve heard for most of your adult life. Most prominent here is Walser Toyota, also in Bloomington. (Since Berryman’s day, most of the big dealers aren’t on Lake Street, but out in the south and west suburbs.) None of that stuff is on there, though – no Toyota, no Bloomington, just WALSER in a sleek, sci-fi typeface. It’s one of those styles that probably seemed very futuristic when it was adopted, went through a period of looking a little dated, but has been around long enough to be very recognizable. It isn’t the logo they use on their website, which is a clean, unfussy Helvetica, but it’s still on the side of their building. You can spot it from 494.

The strangest – and, for me at least, the best – is another one of those one-word dealers. Barnett Auto in White Bear Lake puts its name across the bumper in a blocky, shadowed typeface called ITC Pioneer. You may recognize that one from, of all places, the poster for the 1971 classic blaxploitation action movie “Shaft.” The typeface was created by the International Typeface Corporation in New York City in 1970, the same firm that gave the world the modern versions of a bunch of fonts you probably still use today (Garamond, Bookman), and a bunch more associated with the highs and lows of ’70s design. At the time, it must have looked very innovative and design-forward. The fact that a car dealership in suburban St. Paul is holding onto this logo well into the 21st century is a little bit miraculous. 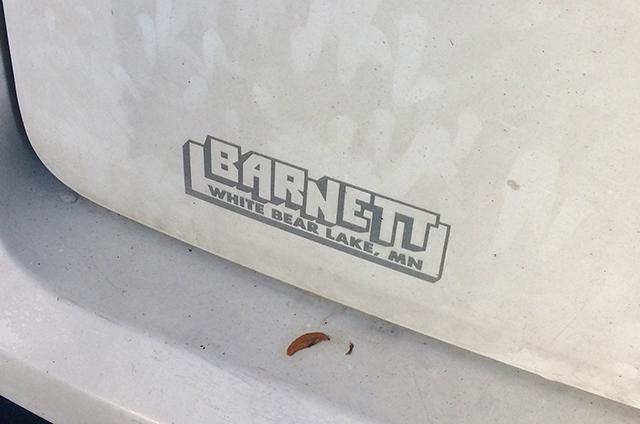 MinnPost photo by Andy Sturdevant
They say this cat Barnett is a bad mother…shut your mouth!

Most of these do call back to the 1950s, ’60s and ’70s, which is not a surprise, considering the sway that automotive culture had on the landscape of the Twin Cities in those decades. A logo on a decal that looks a little retro on the back of a sleek, aerodynamic new car is meant to impart a sense of continuity, a sense that the people who sold you this car have been around for long enough to see design trends change. Few really attempt anything contemporary. The exception here is Luther Toyota, which utilizes a playful logo of a streamlined car with a little price tag, looking like it might be driven by those vinyl stick person families you often see on the backs of SUVs and minivans.

There is, of course, at least one more outlier. Name recognition is what separates the successes from the failures in the auto dealership game, and so the savvy car dealer takes advantage of any tools that may be at its disposal. To that end, Mauer Chevrolet uses a very specific design sensibility in its decals: a sporty serif design that may or may not suggest what you might find on a baseball jersey. Long after a bronze statue of Cretin-Derham Hall’s most famous son is erected outside Target Field, commemorating his ninth-inning home run in Game 7 of the 2019 World Series, there will still be Chevrolets to sell in Inver Grove Heights, where the used cars live.