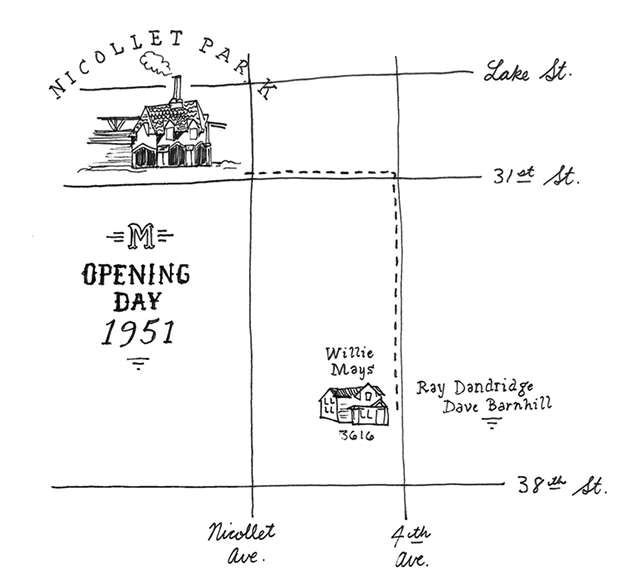 MinnPost illustration by Andy Sturdevant
Mays’ neighborhood was located very close to Nicollet Park, where the Minneapolis Millers had played since 1896.

Willie Mays, one of baseball’s all-time greats, spent about two months in Minneapolis playing for the Millers before the Giants called him up in 1951. In the years after Jackie Robinson broke major league baseball’s color barrier, Mays came up from his native Alabama, where he’d played with the Black Barons, and then into the New York Giants’ farm system to the Trenton Giants. He spent most of May and June with the Millers before getting the call from Leo Durocher in New York. The local sportswriters – in that era when sportswriters tended to be the most effusive members of their organizations – were smitten. The Tribune’s Halsey Hall was already calling Mays “one of the greatest players who has ever come along in baseball” by 1951, and none of Hall’s colleagues disagreed.

Millers fans were smitten, too, or at least the few who got a chance to see him. The “I Didn’t See Him Club” was the name a few fans gave themselves, after finally dragging themselves to the ballpark after the spring thaw and realizing they’d missed the chance to see one of the most brilliant players of all time up close. (Very up close, since Nicollet Park was tiny, with bleachers right up to the foul line.)

A talent like Mays was bound for bigger things.

In Mays’ very brief time in Minneapolis, he lived in a rented room at 3616 Fourth Avenue South, right behind the Hosmer Library. The house is still standing; as of this month, it was undergoing some renovations, but otherwise it looks very much like the other 1910-era two-story houses in the neighborhood.

Mays’ boarding house was owned by a white Air Force officer, but he was living in one of the centers of black life in the Twin Cities in the 1950s. The neighborhood’s business and residential district was located around 38th Street and extended north and south several blocks. Forty-Second Street was the boundary – “the neighborhood to the north of 42nd Street had one of the highest percentages of black residents in the city,” according to one study by the city, with the neighborhood to the south almost entirely white. It was one of a few areas in the Twin Cities where African-Americans owned their own houses in the postwar boom years, when the Twin Cities’ black population grew by 60 percent.

Housing discrimination at the time was rampant. Redlining was not explicitly banned until 1974, with the city’s Civil Rights Ordinance. Housing was, in the 1950s, governed by overt discrimination in the forms of restrictive deed covenants and redlining, and by more insidious, off-the-books forms of discrimination in the form of gentlemen’s agreements and old-fashioned Upper Midwestern passive aggression. Broadcaster Michele Norris, who grew up in south Minneapolis, writes about her parents’ experiences purchasing a house about this time in her memoir: “Realtors would ‘forget’ appointments or make hasty exits when my parents walked into the office.” 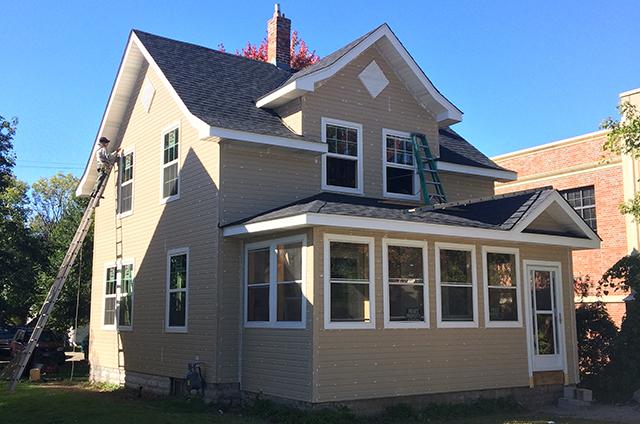 Along with Near North, this stretch of the southside was the heart of Minneapolis’ black community. The offices of the Minnesota Spokesman-Recorder, the state’s longest-running African-American-owned newspaper, are located very nearby, about a block south on Fourth Avenue. In the early 1950s, the neighborhood was home to a large number of black-owned shops, banks, groceries, community centers and churches. Sabathani Baptist Church, now the Sabathani Community Center and located in the old Bryant Junior High School, was a part of this community. So were Lena O. Smith, civil rights attorney and one of the founders of the Minneapolis Urban League, who lived on Fifth Avenue, and Archie and Phebe May Givens, real estate developers and namesakes of one of the nation’s largest collections of African-American literature, who lived on Third Avenue.

Mays almost certainly frequented these businesses and got to know the people who owned them, but he wasn’t in town long enough to become deeply enmeshed in the community. He lived alone, but was across the street from two other former Negro League stars who’d been signed by the Giants organization and were playing for the Millers, Ray Dandridge and Dave Barnhill. Both men were significantly older than Mays and reaching the end of their careers, but served as both mentors and friends. Playing for Trenton, Mays had been the only black player on the team – “a wide-eyed black kid entering a white man’s world,” as he later wrote. His experience in Trenton was an isolating one, where he endured an endless stream of racial abuse and slurs from the stands. Having Dandridge and Barnhill with him on the Millers and living nearby made for a less isolating experience in Minneapolis for Mays.

Mays has been a lifelong movie fan – he later had the opportunity to play himself in a Rankin-Bass animated cartoon in the 1970s – and frequented the movies throughout his career. Westerns, particularly in double features, were apparently his favorite since childhood. This means he probably spent part of his time in town at the Avalon on Lake Street, or the Parkway on Chicago, both not far from his home. There were over 80 Westerns released in 1951, so he had his pick. In fact, Mays was watching a movie by himself between games in Sioux City, Iowa, when the call came from the Giants that he was being called up the majors, in one of the great anecdotes in baseball history. The Giants’ management must have known he’d be at the movies, because between films, the message “WILLIE MAYS CALL YOUR HOTEL” appeared on-screen. The very next day, Mays was in Philadelphia in a Giants uniform. By the end of the season, the Giants had won the National League pennant.

The neighborhood Mays lived in was located very close to Nicollet Park, where the Minneapolis Millers had played since 1896. In fact, Mike Kelley, the former owner of the team, owned a great deal of property in the neighborhood, and had sold a few of the plots to Givens, who developed them for African-American families about the time Mays was in town. Located at the nexus of the Lake Street and Nicollet Avenue streetcar lines, Nicollet Park was easily accessible for most of the city. Lexington Park, where the crosstown rival St. Paul Saints played, was a half-hour trolley ride way, and shuttling between the two fields for a double-header was a regular highlight for baseball fans in the first half of the 20th century.

Nicollet Park was like a lot of minor-league ballparks of the time – a little rough around the edges. “Soggy, foul, rotten, and thoroughly wonderful,” as Tribune writer Dave Mona once memorably put it. Eddie Popowski, who later managed the Millers but visited the park while playing for Louisville, “recalls players having their gloves and shoes chewed up by rats when they left them overnight,” according to writer Stew Thornley. 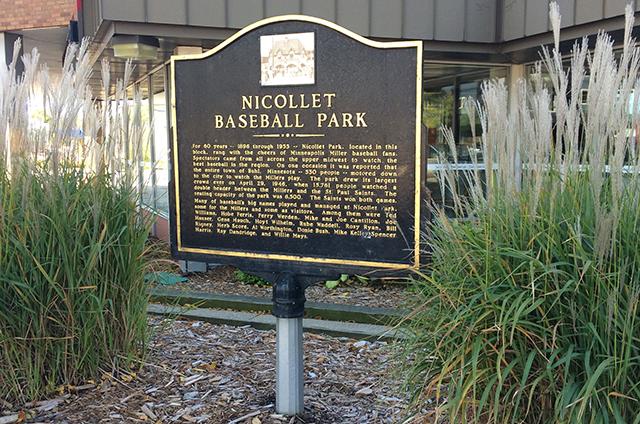 MinnPost photo by Andy Sturdevant
A historical plaque you can read on your way from the parking lot to the ATM.

It was relatively tiny, only 279 feet down the right field line. For comparison’s sake, Target Field’s right field line is 328 feet. Its most memorable feature was the ticket office, a Spanish-style villa with a ceramic tiled roof. There’s mural a few blocks south at 36th Street that shows that part of the park, which was located at Nicollet and 31st.

Nicollet Park closed only four years after Mays left, after 60 years of baseball. The Millers moved to Metropolitan Stadium in Bloomington in 1956, an area that was as sleepy and pastoral at that time as Nicollet and Lake was in 1896. The Millers were succeeded by the Minnesota Twins in 1961, and the Met and Metrodome’s lifespans combined didn’t match Nicollet Park’s six decades.

The year Nicollet Park was demolished, Norwest Bank built a modernist brick building on the site – one of those buildings that must have looked great at the time, looked terrible 10 and 20 and 30 years later, and is now maybe starting to look not bad again. What is today a Wells Fargo bank is home to one of the most oddly placed historical markers in the Twin Cities – by the front entrance and the parking lot, there’s a little garden with a plaque commemorating the field and the players, including Mays. 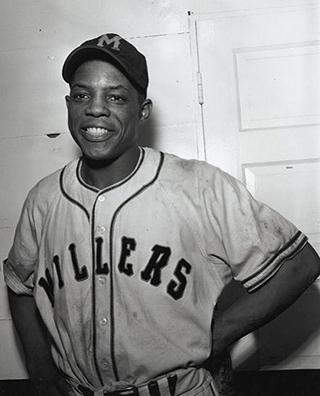 Courtesy of minnbaseball.org
Willie Mays in his Millers uniform.

What’s striking when walking from Mays’ room on Fourth Avenue to the stadium site is how close it is – just a little over a mile. Has any ballplayer since the 1950s lived as close to the stadium as Mays lived to Nicollet Park? Unless Joe Mauer lives in the Warehouse District (or Gary Gaetti lived in an apartment inside the Metrodome), I’d guess very few.

There’s a great story of Mays’ opening day with the Millers, generally regarded now as one of the great debuts in local baseball history. Mays woke up in the morning, saw snow outside, and figured the game was canceled. Who plays ball in the snow, after all?

The manager called him up and demanded to know where he was. Mays explained. The manager told him, no, we just use a helicopter to clear the snow off the field, it’s not snowing anymore anyway, now get down here.

So Mays suited up in his Millers jersey, put on a coat, and headed to the park. It would have taken him about 20 minutes to walk down Fourth Avenue to 31st Street and to Nicollet Park. A few hours later, Mays made what was described as a “sparkling catch against the flagpole” in his Minneapolis debut. The Millers beat the Columbus Red Birds 11-0. Willie Mays would be in New York two months later.