Only a handful of bridges in either Minneapolis or St. Paul are named for people. This probably isn’t something most people give much thought to, and just as well, since the bridges have pretty pragmatic names that have clearly served them well for decades. Most of them are adjectives or streets – High, Intercity or Stone Arch for the former, Lowry, 10th Avenue, Robert Street or Mendota for the latter. They tell you where the bridge is, or maybe what it looks like, but otherwise don’t give you much more to go on. Maybe that’s enough for people just trying to cross a river or highway and don’t require a neighborhood history lesson as they do so. As I’ve written elsewhere in this column about the numeric street-naming scheme that dominates most of Minneapolis and parts of St. Paul, I suppose there is something refreshing about having named places with very little cultural baggage.

Most of the bridges named for people aren’t really popularly known by those names, anyway. I could be missing some, but I believe the only such bridges around are named for a Norwegian-American engineer, an Indian spiritual leader, a Minneapolis congressman, a Minneapolis alderman and a Selby Avenue business owner. These would be the F.W. Cappelen Memorial Bridge (although no one calls it that – you and I know it better as the Franklin Avenue Bridge), the Sri Chinmoy Peace Bridge (ditto – much more commonly known as the Lake St.-Marshall Avenue Bridge), the Martin Olav Sabo Bridge, the Van White Memorial Bridge, and the Merle Harris Bridge, which lifts Selby Avenue over the bizarre pseudo-highway that is Ayd Mill Road.

I’ve never heard anyone use call the Franklin Avenue Bridge anything other than that. F.W. Cappelen, the engineer who designed his eponymous bridge in the 1920s, hasn’t loomed largely in the collective memory. The Sri Chinmoy Peace Bridge, too, isn’t typically referred to by that name – the only time I think of this is looking out the window of the No. 21 bus on Wednesday afternoons, when peace activists march up and down the length of the bridge. They have done so since 1999, when the U.S. and NATO bombed Yugoslavia, and will continue to do as long as U.S. military operations are active somewhere in the world (the foreseeable future, in other words). It’s been known as the Sri Chinmoy Bridge since 1991, as a sign citing Hubert H. Humphrey and Roy Wilkins and the city councils of Minneapolis and St. Paul attests. There are, in fact, many other Sri Chinmoy bridges around the world, making the bridge here not unique.

The Sabo Bridge, a bicycle and pedestrian suspension bridge that floats over Highway 55 on the Midtown Greenway, is commonly known by that name, after the longtime congressmen and cycling advocate who was involved in its funding. Same goes for the newly constructed Van White Memorial Bridge, named for the northside alderman. 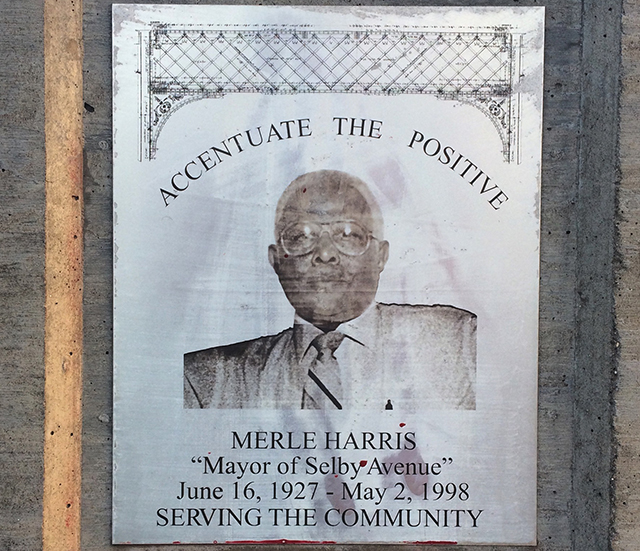 Merle Harris is, to my mind, exactly the sort of person you want a bridge – or any other piece of neighborhood infrastructure – named for. Harris was a business owner and neighborhood leader on Selby Avenue for most of the 20th century, from the time he opened a shoe repair shop after World War II to his death in 1998. On the bridge, there’s an engraved metal plaque: a portrait of Harris looking smart in a jacket, tie and plastic frame glasses, haloed by his motto: ACCENTUATE THE POSITIVE.

Below him is some additional information:

Naming things like bridges after people is a tricky business. There has to be a balance between how well the person is known generally, and how closely connected they were to the community the infrastructure serves. If the namesake is too famous, it seems like a meaningless pro forma gesture. If the namesake is not well known enough to outsiders, it might seem insular and confusing.

If you think about the most famous bridges in America named for people, they usually negotiate this line with mixed success. Take New York City, for example. Everyone knows who George Washington is and no one associates him specifically with Manhattan, so the George Washington Bridge could really be anywhere in America. To the south of that, the Verrazano-Narrows Bridge putatively honors explorer Giovanni da Verrazzano, but has more to do with the political influence of the Italian-American community in New York at the time than the specific achievements of Verrazzano. In fact, they didn’t even spell his name right (his name had two z’s, not one) on the bridge named for him. 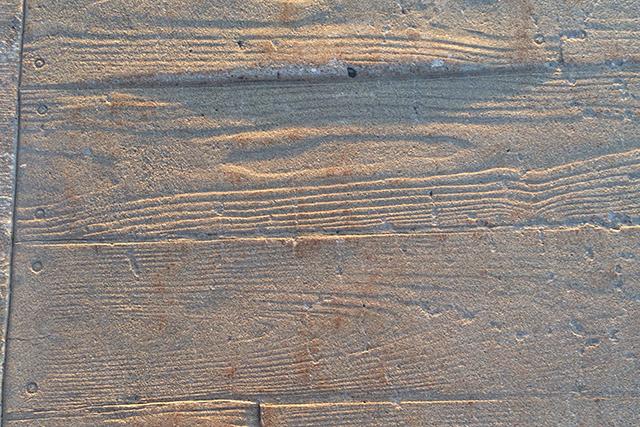 MinnPost photo by Andy Sturdevant
Remainders of the supports underfoot.

This is where a personality like Merle Harris is well suited for the honor: not well known to many, perhaps, but very well known and admired both in the neighborhood, and among people who would most frequently use the bridge. For one, Harris was one of the prime movers in having the bridge built, after the old one was torn down, an action that had a negative effect on, in his words according to a contemporary account, “the avenue, its people and commerce.”

The site of the new bridge, renamed for Harris in 2004, is at an odd confluence of geographic factors. Before anything else, there was a creek running through this portion of St. Paul, creating a shallow basin that made it a logical site for a commuter train connecting the Twin Cities’ two downtowns through the middle of the neighborhoods of St. Paul – the so-called “Short Line.” The rise of the interurban street car lines made it redundant, and so it was a heavy rail line for years. During the construction of the interstate system in the 1960s, the road was envisioned as a link between I-94 and 35E.

Of course, by the 1960s, there was a mobilization in the neighborhoods of the Twin Cities against the preferred method for interstate construction, which was destroying the neighborhoods they passed through. By this time, the Rondo neighborhood had been destroyed to make way for 94, as had large portions of south Minneapolis around Stevens Avenue. Neighborhood groups were able to mobilize against interstate construction in other parts of the city, learning from the tactics of activists in other neighborhoods – Prospect Park and northeast Minneapolis, for example, as well as Merriam Park. So for years, Ayd Mill was an odd, obscure below-grade shortcut for people in the know.

During this time, a metal truss bridge carried Selby Avenue over the valley, and through the heart of St. Paul’s African-American community, after World War II. It’s this community that Merle Harris moved into after serving in the Navy, and the community he championed throughout his life. 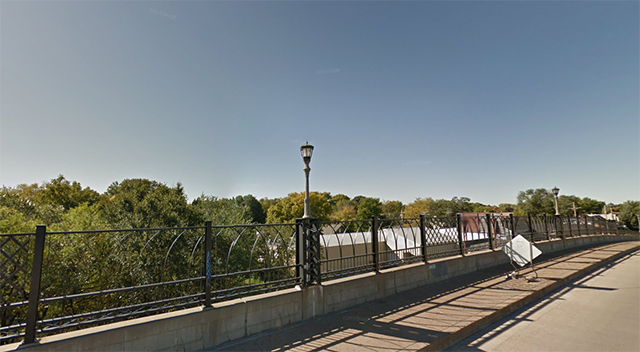 Selby Avenue around Dale Street after the war was at the commercial heart of St. Paul’s black community. Around that intersection, Harris remembered later, “we had two drugstores, a restaurant, three medical doctors, at least two dentists, three clothing stores, a bakery, two shoe-repair shops and a grocery store.” One of the shoe repair shops was his, and he’d later have a number of other businesses in the neighborhood.

Selby Avenue was also the site of some of St. Paul’s civil unrest in late 1968. The community had been hit hard by racism, housing and employment discrimination, police harassment and so-called “urban renewal” projects that displaced the residents of the nearby Rondo community and destabilized black communities. After an incident between some black youths and St. Paul police at a dance hall on Labor Day weekend, violence spilled out into the streets, resulting in police tear-gassing a mass of teenagers, and a number of shootings, injuries and arrests.

Harris remained in the neighborhood through that period and after. In these years, he became known as “The Mayor of Selby,” acting as a liaison between the community and the city’s leadership, co-founding the Selby Area Commercial Club, encouraging business growth and redevelopment, and planning community events.

“Merle always had faith and confidence that Selby Avenue would come back,” said an associate in his obituary in 1998, “and he lived to see the fruits of his efforts.”

The bridge that he championed was built in 1993, a few years after the old truss bridge had been demolished. The new bridge uses some of the metal trusses as decorative elements, and the way it rises over the Ayd Mill valley gives a sweeping, panoramic vista of the neighborhoods surrounding it. The names of the rail lines that once used the Short Line are chiseled into the sides of the bridge in stately letters.

But the real attraction is Harris’ plaque on the west side of the bridge, visible from the sidewalk on the south side. Since the bridge is made of concrete, there are portions where you can see the wood grain from the wooden supports that were used in the building of the bridge. A name on a bridge or other urban landmark should work in a similar way: It should show the presence and support of a person that, though long gone, has made their work visible. The Merle Harris Bridge does just that.