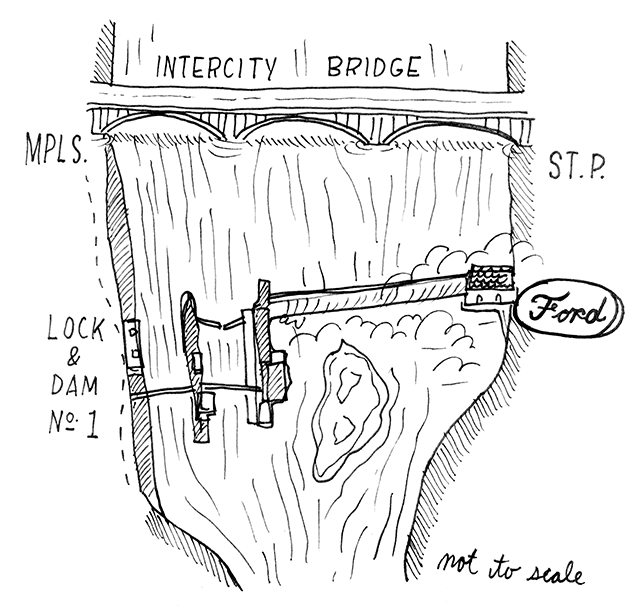 MinnPost illustration by Andy Sturdevant
Lock and dam and bridge and power plant, sitting across the surface of a great river.

Walking down the trail from Godfrey Parkway below the bridge that connects Minneapolis’ 46th Street and St. Paul’s Ford Parkway, I looked up, and saw the following graffito on the concrete support:

That’s right. Not even nature can provide an escape from the hell that your life has become. Oh, well. It seemed worth a try, anyway.

The nature trail doesn’t lead to hell, but to Lock and Dam No. 1. Since last year’s closing of the St. Anthony Lock and Dam upriver to stem the invasion of carp into the Minnesota interior, Lock and Dam No. 1 has been promoted to head of navigation on the Mississippi River. If you could look all the way down the Mississippi River to St. Louis, 750 miles away, you would be looking down from the top of a 400-foot segmented, slow-motion waterfall that allows barges to proceed, step by step, between the two cities. Four hundred feet is an abstract term to spatially challenged people like me, so imagine peering down the distance of a football field, top to bottom.

The Lock and Dam No. 1 is the best place in the Twin Cities to see, up close, how commerce and industry has shaped the river physically. The visitor’s center is open during the warmer months, and you can walk up much closer to the action than you think you ought to be able to, and see what it looks like to have 6 million gallons of water displaced with the flip of a switch by a civil engineer. It’s the kind of thing that, if you’d seen it as a child, could have potentially impressed you enough to foster a lifetime interest in engineering. It’s still impressive to see as an adult. 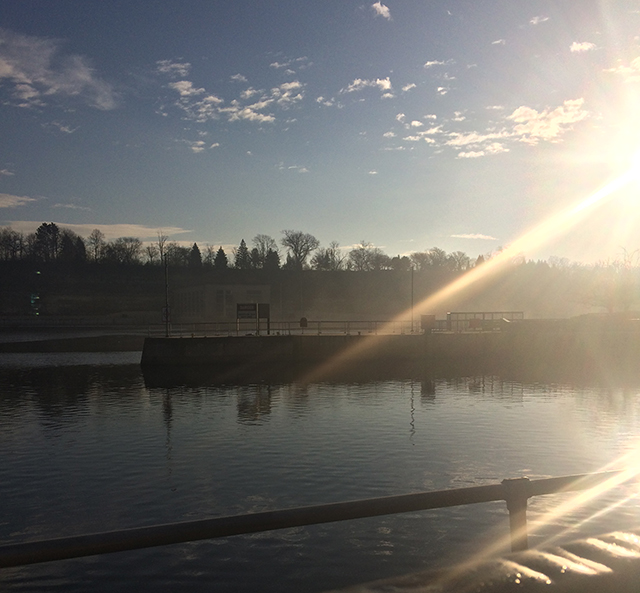 MinnPost photo by Andy Sturdevant
Mist and sunlight over the dam.

A hundred years ago, people might have been dancing in the streets of St. Paul if they’d known their hated upriver rival’s lock and dam had closed, leaving their St. Paul the head of navigation, the last word in maritime commerce in the interior. (Of course, you’d first have to explain to them a lock and dam had been built in Minneapolis in the 1960s, but they’d appreciate it, anyway.) As relations between the two towns warmed after a rough few decades around the turn of the century, the opening of the bridge over the lock and dam was a way to encourage economic development and ease of travel between two comparatively remote parts of the cities. The plaque on the base of the bridge uses language so diplomatic you’d think it connected two warring principalities that’d just arrived at an uneasy peace. Each mayor and each city engineer is scrupulously positioned with equal footing on each side.

The plaque, oddly, calls the bridge the “Mississippi River Bridge,” though the official (and better name, in my opinion) is the Intercity Bridge, a concrete monument to the connection between the two towns, and a term you don’t hear nearly enough.

Commerce often trumps civic good intentions, though, so most people colloquially know it as the Ford Parkway Bridge, or even just the Ford Bridge. Crossing east into Highland Park, you’re quickly reminded of the enormous imprint the Ford Motor Company placed on the neighborhood that once hosted its factory: Ford Parkway was once Edsel Road, and the area is strewn with reminders of the neighborhood’s automotive benefactor (my favorite are some apartments a half-mile down called the Ford View, their logo over the front doors in the familiar Ford script). Even the name “Highland Park” is an awkward, vaguely aspirational bit of corporate deference to Highland Park in Michigan, where the first Ford plant was built. Both Highland Parks are in the same boat these days: Neither one is home to a Ford plant. 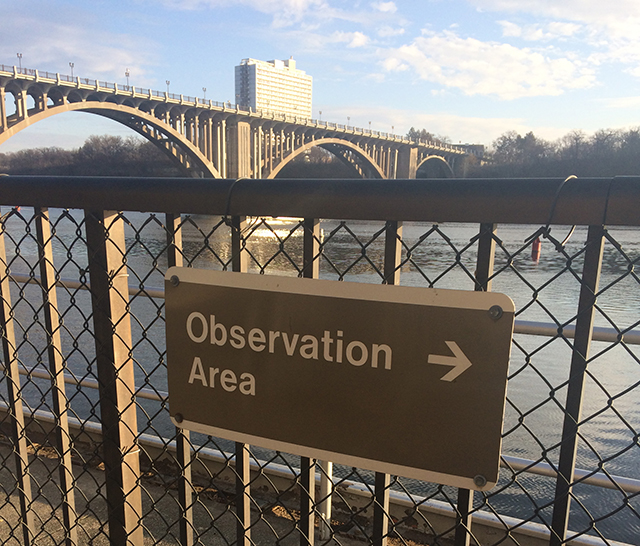 Henry Ford brought a plant to St. Paul pretty early on, in 1923, about two decades after the company was founded in Michigan and a few years before the term “Fordism” was coined, though the concept already existed in practice. Ford was attracted by the possibility of harnessing the river for cheap power near the existing site of a major lock and dam, an option not entirely possible in other metropolitan areas in the Midwest. Across the river, on the Highland Park side, there is still a red-tiled hydroelectric plant that powered his assembly lines, and still generates power, another reminder of how commerce shapes the landscape.

This is a landscape shaped both by commerce and by early ideas of conservation, and the two live in a delicate balance with each other. You can see the direct transfer of one into the other, in fact: Your descent down the nature trail to hell to the visitors center at the lock and dam takes you past soaring limestone bluffs streaked through with white and yellow, and capped off with verdant green. This is limestone of the same type, in all likelihood, that was powdered and heated to create the Portland cement that was then shaped into the concrete architectural forms of the dam and bridge.

“You’ll find scenery between here and St. Paul that can give the Hudson points,” wrote Mark Twain on this stretch of the river, speaking through the voice of a character he encounters, a few decades before the dam. “Why, you never saw foliage so green, nor packed so thick; it’s like a thousand plush cushions afloat on a looking-glass—when the water’s still; and then the monstrous bluffs on both sides of the river—ragged, rugged, dark-complected—just the frame that’s wanted.” 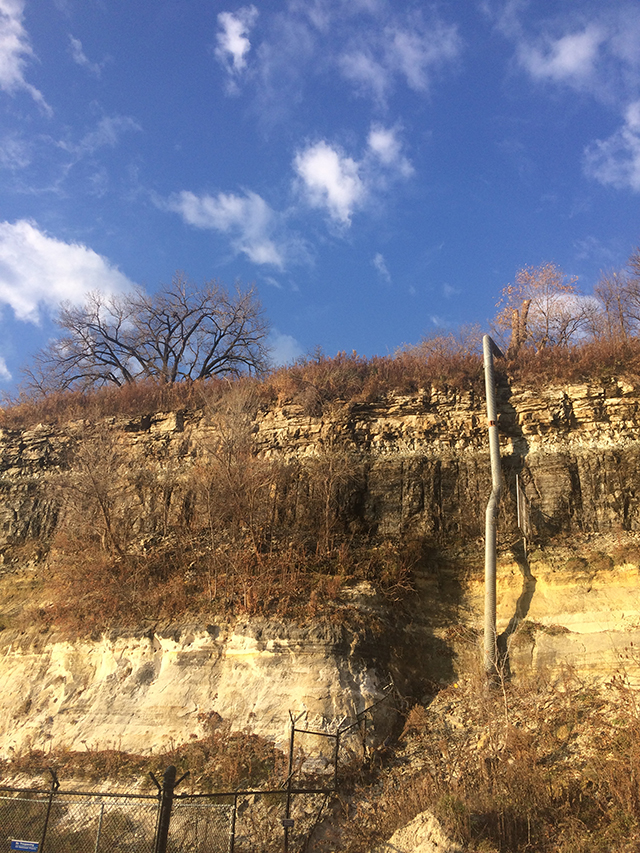 MinnPost photo by Andy Sturdevant
Up from below.

The frame Twain wanted was provided, maybe, by the engineers that built the Intercity Bridge. It sets a sort of frame around the whole scene – the dam, the falls, the bluffs, and all the rest of it. I love crossing the bridge on foot or on the (technically “intercity”) A Line or 46 buses, and seeing the dam below, and the way the mist from the falls rolls across the river. I love the way the red brick of the Minnesota Veterans’ Home lingers on the bluff above, like a little river village. The tower on Building 6 peeks over the landscape – for years, I thought it was a church steeple, but it’s just an ornament to the head building on the campus.

The notification of your descent into nature trail hell under the bridge is joined by another graffito on another support: THIS POISONED RIVER WILL BREATHE AGAIN. It’s hard to tell if the same people spray-painted this one, or even if the two statements are in ideological alignment with each other. What you can take away from one or both, I suppose, is that there is a real and deep complexity in how natural and human-made systems interact. There’s no better example of that interplay than a lock and dam and a hydroelectric power plant, sitting across the surface of a great river. Hell or not, you are getting into some sense of the transcendent, at least — it’s hard to not feel a sense of awe at the scale of the river itself, and the scale of those human systems that have grown up over and around it in the course of a hundred years.

On the trail to Lock and Dam No. 1