Recently, I was talking to a friend about the central role of the telephone in daily life before cellphones, and even before the era of the dial-up internet. More than the early internet, or even TV and radio, the telephone was the surest direct connection from your insular life at home to the outside world in all its scale and complexity.

With five or six TV channels, you generally knew what you were getting into. Bud Kraehling would show up at his usual times every day. Radio, with its overnight AM stations broadcast from hundreds of miles way, could provide a little more unpredictability. I remember the first night I ever picked up T.D. Mischke on an AM radio, and how bizarre and otherworldly his show seemed, like it was being broadcast from a more interesting alternate dimensions.

But phones connected you person-to-person. Unlike TV or radio stations, there might be hundreds of thousands of phone numbers out there – hundreds of thousands of possibilities to experience something life-changing, or at least more interesting than syndicated ’60s sitcoms or the farm report. The centrality of the phone in American life is evidenced by the many, many subcultures it spawned in the last half of the 20th century: phone phreaks blowing whistles to fool Ma Bell, prank callers recording their work and releasing them through underground cassette tape exchanges, 1-900 numbers with teen idols, movie stars and sex workers on the other end.

Somewhere in the middle of all of these lived the simple hotline, the dial-a-number, the prerecorded phone message, created for profit, fun or some other less defined reason.

My friend fondly recalled at least a half-dozen Twin Cities phone numbers he’d dial up on the family phone when he was bored or, more rarely, seeking some specific piece of information. This was before 651 and 763 and 952 – they were all seven-digit numbers where the 612 area code was assumed. As in most American cities, there was a thriving ecosystem of hotlines locally serving all kinds of purposes for 30 years.

There aren’t recordings of most of these Twin Cities numbers out there – if anyone remembers any of them, it’s from memories of calling them, or maybe of jingles from daytime TV advertisements. But to walk through the vanished landscape of the Twin Cities telephone hotline of the ’80s and ’90s is to get a sense of the sorts of relationships people had with current technology, and how they expected to use those technologies to relate to the larger world. Like fossil molds, the living tissue is gone, and only the shapes are left.

Any investigation of this topic has to begin with a phone number burned into the memory of anyone living in the Twin Cities in the ’80s: 922-9000. The Connection was a free “Electronic Yellow Pages” that put callers in touch with “friendly operators” sitting in suburban Edina to get information about – well, lots of things.

MinnPost photo by Andy Sturdevant
Information bureaus. No. 1: The Connection.

A spin through the print media of the time offers countless examples of The Connection as a solution to any number of problems. Need a State Park pass? Call The Connection. Metrodome tickets? Call The Connection. Want to talk to a florist, bakery, art gallery, Italian restaurant or plumber? The Connection will find them and connect you for free. It’s hard to say how far the assistance of The Connection’s operators extended, but a Washington Post preview of the 1992 Super Bowl, held at the Metrodome, directs football fans to call the number for information about “Bowl-related and non-Bowl diversions.” You know, just call them about, I guess, whatever. If my conversations with regular callers in preparation for this piece are to be believed, lonely people apparently just called up The Connection to chat sometimes.

As they do with the Internet today, lonely people have always found a friend in the telephone. One of the earliest uses of prerecorded message technology aimed at the lonesome was the Dial-a-Prayer, a service connecting callers a short devotional, sermonette, prayer or inspirational message. One of the first such services locally was run by the now-defunct Wesley United Methodist Church, which launched a dial-a-devotion service in 1955, right as many of the parishioners were decamping for the suburbs. It was an immediate hit, and many followed. The most prominent in the late 1980s, at least according to the local phone books, was the Dial-a-Prayer run by the Rev. Joyce Kajetin at the Lake Harriet Community Church. I’d call the Rev. Kajetin and ask her what sort of material she included on her recordings, but alas, Rev. Kajetin has apparently vanished from the internet completely. As late as 2000, there were still headings in the local phonebook for “Inspiration” and “Prayers.”

MinnPost photo by Andy Sturdevant
A prerecorded prayer from the heart of Linden Hills.

On the other hand, you could also dial an atheist at 776-6163. Run by the local chapter of Madalyn Murray O’Hair’s American Atheists association, the number featured “a rotating series of opinions from local members about the role of religion in society.” By 1991, unfortunately, in a story about the local group’s schism with O’Hair’s national organization, the Star Tribune reported “local organizers … plan to stop the phone line as soon as the chapter is folded because they feel it is seldom used.” The number is, like every other number discussed here, currently defunct. 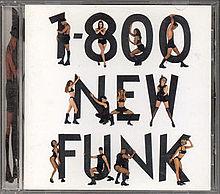 Prince, always an enthusiast of cutting-edge technology when it suited his specific needs, set up a toll-free line at 1-800-NEW-FUNK in 1994. Not only did he use the number as the title of a record, but he also wrote at least two short promotional songs about it. “And by phone just dial / 1-800-New-Funk,” he sings in the promo tune of the same name. “If you live outside the United States / Please dial 612-474-1751 / Call now / Before I start laughing.” He expands on the scenario in “On Sale Now,” a quasi-jingle that appeared on “The Holy River” single in 1997. The song finds an unnamed Prince fan calling up and asking for lyric books and other merchandise. He finds he can purchase any and all of it at 1-800-NEW-FUNK, or at the local Minneapolis number.

While most American cities had dial-a-prayers, dial-an-atheists, electronic Yellow Books and other service and entertainment-oriented hotlines, only Minneapolis had the Zzzzyzzerrific Funline.

The creation of Josef Engressia, Jr., aka Joybubbles, aka High Rise Joe, the Funline featured a regularly updated message from Engressia that ranged from extolling the joys of Valleyfair to selling invisible T-shirts for the price of 10,000 invisible dollars. (His credo was “Help keep the world safe for nonsense.”) The spelling of “Zzzzyzzerrific” ensured that the number, 870-1111, was the last entry in the Minneapolis and St. Paul phonebooks for a decade. For several years in the 1980s and early ’90s, Engressia recorded his messages in his high-rise apartment at 1355 Nicollet Avenue, and made him a cult hero to local children and adults alike. 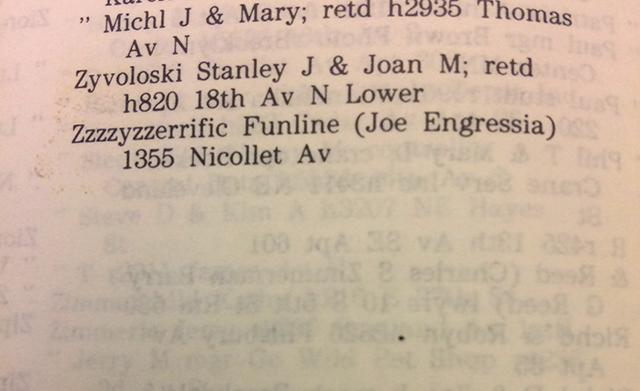 MinnPost photo by Andy Sturdevant
The last number in the White Pages.

Engressia had come to prominence as one of the early “phone phreakers,” an analog subculture of pranksters, explorers and technology enthusiasts who would remotely explore public telephone networks in the ’60s and ’70s. At that time, phone networks were regulated by tone dialing, meaning a certain automatically generated tone was used to trigger switches, which would then signal the beginning and end of calls. If a phreaker could imitate that tone, whether with a machine, whistle, or with their own voice, they could access the back end of the phone network. From there, they could make any call for free, anywhere in the world, at a time when long-distance calls were prohibitively expensive. Steve Jobs and Steven Wozniak of Apple Computers got their start building “blue boxes,” homemade machines that would imitate the 2600 Hz tone that granted backdoor entry into the phone network.

Legally blind from birth and possessing perfect pitch, Engressia discovered phreaking as a child in the 1950s, completely by accident, while aimlessly whistling a tune during a phone call. Over the course of his adolescence, his ability to recreate a 2600 Hz tone by whistling made him a pioneer in phreaking circles. Engressia was charged in the late 1960s for malicious mischief, and subsequently abandoned phreaking. He never abandoned his love for the telephone, however.

He relocated to Minneapolis in the early 1980s, and legally changed his name to Joybubbles. He lived here until his death in 2007 at the age of 58. During the ’80s and ’90s, he regularly recorded messages on the Zzzzyzzerrific Funline, as well as making connections via the phone elsewhere. He worked often with terminally ill children, checking in once a week to sing songs and chat. He took out advertisements in papers in far-off countries, like Australia, inviting curious Aussies to give him a call. During the peak of the Zzzzyzzerrific Funline, Joybubbles got 1,000 callers per week.

“Christmas is the most silent time of the year for me,” he told a KSTP reporter once, when asked about the call load. “My phone doesn’t ring, and even when it does, people are sort of rushed. …” In all of Joybubbles’ work with phones, there is a desire for connection. The phone, more than any other electronic medium, is an intimate one. In all these hotlines, even the most anodyne examples like The Connection, there’s a desire for some meaningful connection. It’s right there in the name, after all.

Prince gets to this with his own hotline. “Damn, now I got 2 find some credit (Somewhere someone) / Yo, baby, loan me a couple of dollars,” the caller sings at the end of “On Sale Now.”

Then the tone changes, and Prince imagines the caller dialing up 612-474-1751 from their bedroom, late at night. Here he explicitly connects the act of ringing up a hotline and the loneliness of the long-distance caller:

*This is a free call in the Twin Cities metropolitan area. Roaming or long distance charges may apply if used outside of coverage area. For entertainment purposes only. You must be 18 or older to utilize our services.

Thanks to Helmut Sporgersi for his assistance.

A friend in the phone: From dial-an-atheist to Prince’s New-Funk to the Zzzzyzzerrific Funline