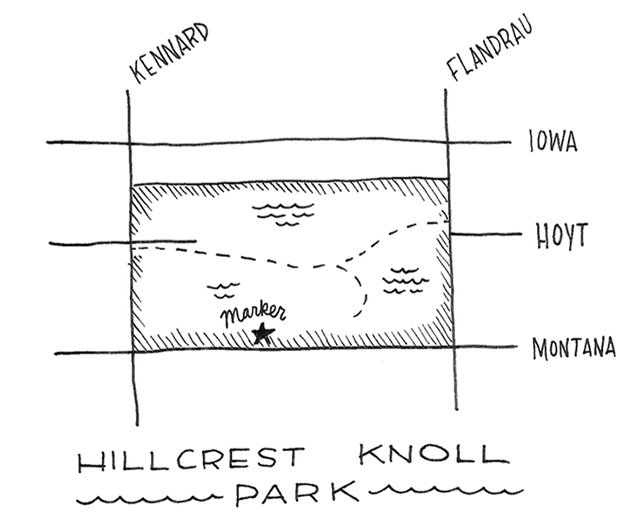 Walking down Montana Avenue on the East Side of St. Paul, you encounter a historic marker in front of a tidy but unremarkable park between Flandreau and Kennard. Engraved on a limestone chunk is a suggestion of how flooding destroyed a small, close-knit neighborhood that once stood on the spot and, like another great flood, a promise that it will never happen again. The stone marks the height of the water with a wavy line, about waist-deep on a full-grown adult. A swampy area on the outskirts of St. Paul, built over in an expansive, prosperous era in the city’s history, the spot was significantly lower than the surrounding land. When a flash flood brought on by a major storm hit one June day, 60 of the homes were partially submerged. The city evacuated the residents, many of them residents of the neighborhood for decades, and in the end, 31 homes were razed. A park was established in its place as a memorial to the vanished neighborhood and the people who’d made homes there, bearing the name of the surrounding community: Hillcrest Knoll Park.

History is full of these sorts of disasters, you think sadly. You look at the date, 1897, and think how many generations have passed since the flooding that blotted out those sepia-toned houses on Kennard, Hoyt and Flandreau Streets.

The flooding that destroyed these blocks isn’t in the distant past at all. Walking across the face of the Twin Cities, you traipse over any number of neighborhoods wiped from the map by greed, shortsightedness, economic forces, natural calamity or some combination of those: Rondo, the Gateway District, Swede Hollow, Bohemian Flats. Natural forces wiped out Hillcrest Knoll, though its fate was sealed when developers after World War II chose a fundamentally unstable area to sell lots on. It’s just that it all happened a lot more recently than we’re used to hearing.

Hillcrest Knoll Park in the very northeastern corner of St. Paul on the East Side, three blocks south of Larpenteur Avenue and one block west of White Bear Avenue. The park is operated by St. Paul Public Works, and the green space acts as a holding pond during rainy seasons. The area was marked as a swamp on early maps of St. Paul, and development grew up slowly around it on commercial thoroughfares like Arlington and White Bear Avenues. During the postwar boom, the land finally became too valuable to ignore. The swamp was filled in and an assortment of Cape Cods and ramblers were built over it. Once there, people stayed put in the neighborhood, too: In 1997, more than a few of the relocated St. Paulites had grown up in those demolished houses, or lived there for their entire adult lives. 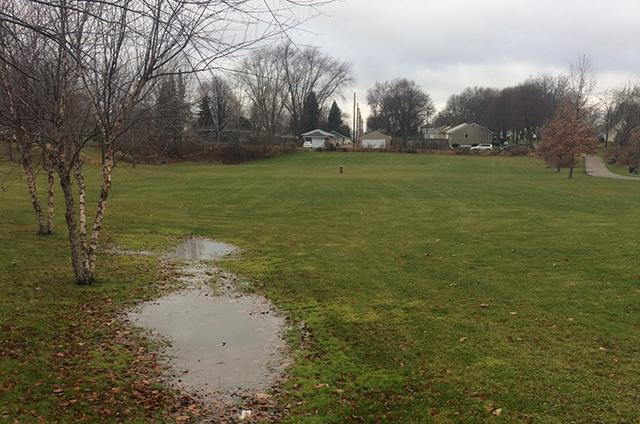 MinnPost photo by Andy Sturdevant
The ground after a recent rain. Over the hours after this photo was taken, the water will slowly drain away.

Which brings us to a question of nomenclature. “Hillcrest Knoll” is a neologism chosen by the neighborhood from a number of suggestions floated by residents and civic leaders. The area has long been known as Hillcrest, being one of the highest points in the city, right between Prosperity Heights and Hayden Heights. A knoll is another type of hill, so the name suggests a hill on top of a hill, despite the fact that the entire site is several feet lower than the neighborhood around it. Presumably a hill inside a depression on top of a hill still averages out to a hill, so I guess we’re in the clear. The rationale for the name seems already to be lost to history, only a decade or two on: One local resident was quoted in the Pioneer Press saying she “[wasn’t] sure why” the name was chosen, just five years after the flood. 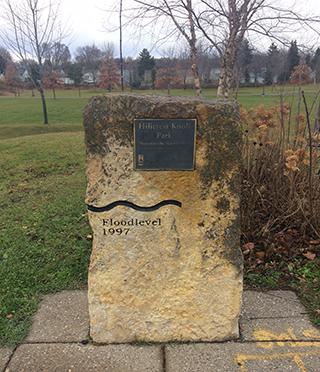 Returning to the topic of lifelong residents, one name suggested was Doslyn Schmidt Park. Dosyln Mazzitello Schmidt lived in a house on Hoyt Avenue between 1949 and 1997, built by her husband, Eugene. During the June flood of 1997, the neighborhood’s city councilman rowed out in a canoe to rescue her, and later suggested the park be named for her. In a newspaper account a few years after, she demurred: “I go past the old place and have to pray and then cry. I lost so much, all the pictures of my children’s weddings, graduations, but I’ve got my memories.” Mrs. Schmidt moved just across the St. Paul border to Maplewood, not far from the old neighborhood. When she passed away a few years later in 2007, her funeral mass was held four blocks away from the park at the Church of the Presentation on Kennard.

It’s not clear why Schmidt wasn’t to be the park’s namesake. The Hillcrest Knoll name stuck out of an assortment of other suggestions, many of which made mischievous reference to the events of 1997: Floodview Park, Titanic Park, Water Park. (Who knows how many confused St. Paul kids would be showing up in swimsuits on summer afternoons if that last option had been chosen.) Perhaps any of these were better than Sewer Utility Park, which was the park’s semi-official post-flooding appellation, and one that is so flatly unromantic it nearly circles back on itself into romance. 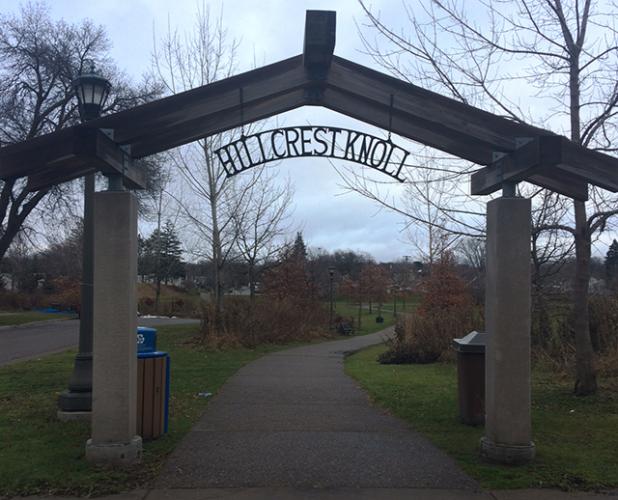 Every few years, the park floods, reverting back to the swampy expanse it was before World War II. Walking through it after a recent rain, water pooled up in pockets across the surface of the park; it makes you think of the basements, toilets and sinks of the residents when there were houses here. What’s different now is there is a system of 60-inch perforated plastic pipes below the surface of the depression that slowly drain the rainwater back into the surrounding storm sewer system when that happens. In fact, reminders of the complex system below are all over: observation monitoring wells and water meters all pop up across the landscape.

Most of the time, the park is very quiet. There’s not much in the way of amenities of the sort you’d find in a traditional city park – the residents, in the planning stages, made a conscious effort to keep the park as passive as possible. Most of the kids in the neighborhood seem to head over to Hayden Heights Playground, a few blocks away. There’s some nice metalworked entry signs over each entrance, and a few park benches. Otherwise, the lack of any recreation suffuses the area with a vaguely lonesome, melancholy quality that’s maybe fitting for the circumstances. 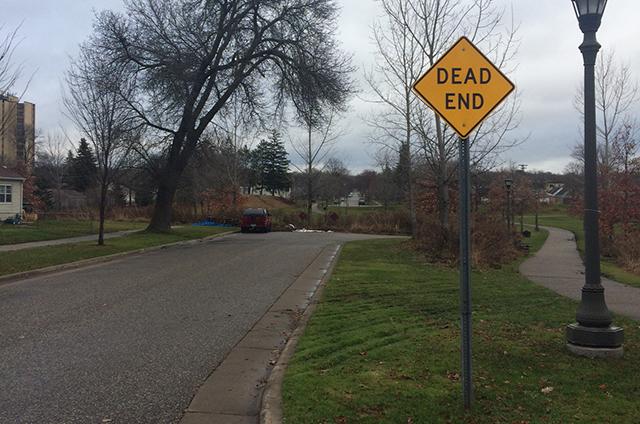 The subtlest marker, perhaps, is Hoyt Avenue itself, where many of the removed and demolished houses were located. Hoyt Avenue hiccups its way across nearly the entire breadth of St. Paul from the University of Northwestern to McKnight Road, interrupted every so often by lakes, interstates, cemeteries, golf courses, railroad tracks, equine sheds at the University of Minnesota, industrial parks, and all the other facets of urban development that conspire against a grid. One of these hiccups is at Hillcrest Knoll Park. Past Kennard Avenue, it continues for a few feet, with one single house on its north side. There, it seems to vanish below the ground for a bit below the swamp, reemerging again on Flandreau. Seen from above, the foreshortened spit of Hoyt serves as a reminder that while you can impose a grid over the landscape, that grid doesn’t necessarily bear any relation to what’s beneath it.

Hillcrest Knoll Park: a reminder of a neighborhood lost to flooding