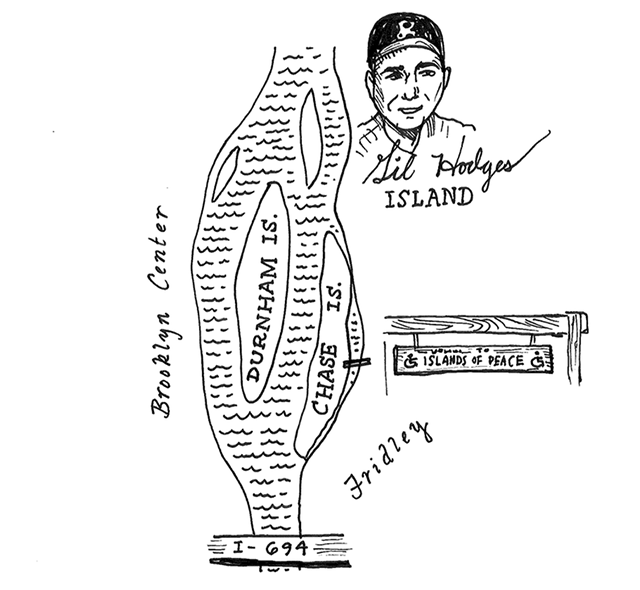 The fortunes of my family have been somehow tied to the islands of the Mississippi River for a few generations. My poor old great-great-grandfather Thomas worked as a bargeman on the Lower River, and met his end near Eagle Island, Missouri, allegedly at the hands of a fellow deckhand. As the story goes, Thomas fell from the barge into the muddy waters off the island, and the fellow who claimed to witness the accident somehow ended up with his gold watch – believe me, judge, I was trying to rescue him, and the only thing I could manage to grab hold of was that watch! On the paternal side, some of my less scrupulous ancestors ran a counterfeiting ring out of the Illinois frontier for 50 years that made extensive use of secluded, wooded islands on the Mississippi and Ohio Rivers.

So I guess I have an ancestral predisposition to feel at home on the islands of the Mississippi (or at least a few ideas on how to shape a narrative for them). On the Upper Mississippi running through the Twin Cities, there are a number of historic and present-day islands that have been used for all sorts of purposes, for centuries – Nicollet, Spirit, Wita Tanka, each at various times inhabited, abandoned, fought over, sites of disasters both natural and human-made, used for worship, contemplation, trade, criminal activity, industry, and any other number of purposes. River islands, despite being centrally located in the river that is at the heart of the cities, are marginal spaces. Besides those several hundred people lucky enough to live on Nicollet Island, few people experience river islands very often. 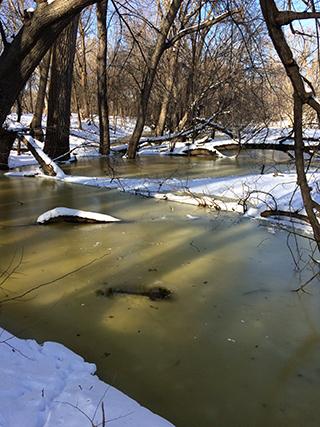 MinnPost photo by Andy Sturdevant
The muddy waters of the Mississippi under a thin layer of ice.

There are three islands in the Mississippi River between Fridley and Brooklyn Center, known collectively since 1971 as the Islands of Peace. There is Durnham Island, the largest one, and Chase Island, accessible by bridge, along with Gil Hodges Island, accessible only by boat. The park is owned and operated by Anoka County Parks and Recreation.

The Islands of Peace were the dream of Edward T. Wilmes, a Navy veteran of World War II. A resident of Fridley who was drafted in 1943, Wilmes was paralyzed from the waist down in a beachhead battle toward the end of the war. He swore that if he made it back to Fridley alive, he’d devote his life to creating a natural space for Minnesotans who had disabilities. He did make it back, and set about making the project a reality on the banks of the Mississippi in the years after the war. The foundation was created in 1971, and the park opened in 1973.

The Islands of Peace were one of the first wheelchair-accessible parks in the Twin Cities. The trailhead is marked by a rustic sign that outlines Wilmes’ expansive credo for the park: “where peace is a way of life every hour of every day for all those willing to share the experience.” Also prominently placed on the sign are two International Symbols of Access – the familiar wheelchair figure adopted internationally in 1969, just a few years before the park opened. The terraced, switchbacked slope from the trailhead to the bridge crossing the river onto Chase Island makes the park wheelchair-accessible. In the years before the Americans with Disabilities Act, such accessibility in parks and nature sites was still very uncommon. 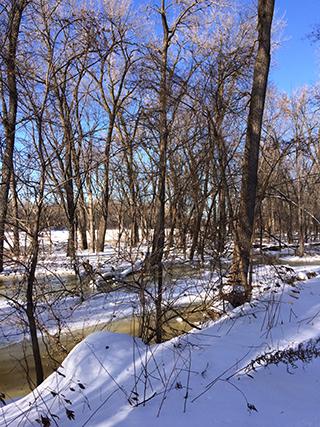 Wilmes is buried at Fort Snelling, but it’s a testament to his love for the park that he left a touching memorial on the island – his service dog is buried there, near another marker commemorating veterans donated by the local chapter of the American Legion. There is apparently a headstone for the dog located somewhere in the vicinity. I couldn’t find it beneath the snow and park staff didn’t seem to know where it might be, but I have it from a few different sources that it’s there somewhere.

There is always an undercurrent of danger where river islands are concerned, no matter how peaceful they may seem – Wilmes’ transfer of the island to Anoka County was precipitated by a drowning in the mid-1970s that made insuring the park privately impossible, and even today, there are semi-regular news stories about drownings and swimming accidents in the vicinity.

Certainly there wasn’t much peaceful about these islands in the hundred years before the park was established. The names Chase, Durnham and Gil Hodges are more contemporary appellations. Nineteenth-century maps mark it only by the name of the private company that owned it, the Mississippi and Rum River Boom Company. Here it was a noisy, dangerous staging area for the thousands of pieces of timber cut down in the north woods and floated down the river to be processed in the sawmills around the Falls of St. Anthony. The Boom Company was hugely influential, owning riverfront and island property from Brainerd to the Falls – islands, much like these, were used as storage pockets for logs making their way south, and were often flashpoints for logjams, which flooded property and residences located on and around islands, lowlands and riverfront property. For these reasons, riverfront property was not particularly valued for any purpose other than brute industry, making it relatively inexpensive for a forward-thinking person like Wilmes to purchase and cultivate a few generations later.

Chase and Durnham Islands are named, like so much else in America, for otherwise unremarkable local landowners. Gil Hodges Island is more of a mystery. Gil Hodges was not a local landowner, nor was he a person with any obvious Minnesota connections.

If you know baseball, you already know who he is. Born in southwestern Indiana into a family of coal miners, Hodges was the first baseman for the Brooklyn Dodgers throughout the 1950s. He was instrumental in the Dodgers’ World Series championships in 1955 and 1959, and played on the team for their first year in Los Angeles. After his retirement from playing, Hodges managed the 1969 “Miracle Mets” the year they won the World Series against long odds – only a few years before, they’d been the most hapless team in baseball, the subject of Casey Stengel’s legendary lament (and the Jimmy Breslin book of the same name): “Can’t Anyone Here Play This Game?” Hodges died suddenly in 1972 of a heart attack at age 47, and fell out of the public conscious shortly thereafter. Though he’s been a contender for the Hall of Fame for years, he’s never quite made it in – perhaps sadly fitting for a polite, self-effacing Midwesterner living during an era of boisterous, larger-than-life personalities. Hodge’s biography was, in fact, entitled “The Quiet Man.” 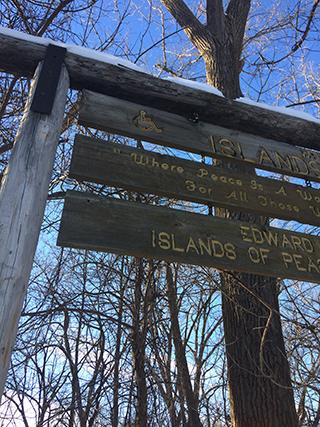 MinnPost photo by Andy Sturdevant
The International Symbol of Access on the trailhead sign, introduced two years before the park opened.

None of that explains why there’s an island in the middle of the Mississippi River named for him, though. Gil Hodges might be the only player in the history of Major League Baseball to have an island named for him. Possibly the island’s name is an offhanded tribute to the Brooklyn across the river. Or maybe it’s a tribute to a fellow veteran of the Pacific Theater – Hodges left baseball in 1943 to serve in the Marines. Most likely is that it’s a simple matter of timing, as Hodges’ World Series triumph in 1969 and sudden death in 1972 align closely with the founding of the park in the early 1970s. Perhaps Wilmes was simply a fan of the Quiet Man.

A building that once served as a visitor’s center near the trailhead – built barrier-free and free-of-charge by a member of the local AFL-CIO in 1981, according to a plaque inside – is now an office for Anoka County Parks. The park is relatively austere today, with some benches and grills and the remains of a pavilion on Chase Island. (In fact, I thought initially the four pylons might be the elaborate final burial place of Wilmes’ beloved dog, but no, sadly, they’re merely the remains of a pavilion.) Thanks to the switchbacks and paved trails, Chase Island remains accessible, and the islands are a home for herons and eagles – they have a reputation among birders as an excellent location for bird watching.

On a winter afternoon, of course, buried under inches of snow, it all looks as still and ancient and ageless as a Bruegel painting. The island is thickly wooded with the sort of elm and basswood typical of this part of the state. Those elms and basswoods aren’t as ancient and ageless as you might imagine, however; they invaded and drove out the oak savannah that was prevalent around here about 300 years ago, following changes in the climate and the decline of prairie fires which made oak savannahs possible. And of course, you factor that in with the thousands of waterlogged timber that was piled up here not that long ago, and the inroads made into the island that made it accessible by wheelchair for the first time, and you realize an island like this is shaped by any number of human and natural factors, always in flux. For the last quarter of the 20th century and the first part of this one, however, the Islands of Peace are peaceful and quiet, all right – as quiet as the Brooklyn Dodger one of them is named for.

On the Mississippi’s Islands of Peace, ‘peace is a way of life every hour of every day’