The New York architect and urban theorist Percival Goodman, remembered today for his modernist synagogue designs, didn’t really design much in the way of religious architecture before World War II. Only afterwards, in his late 40s and after a career in leftist political action, urban planning and commercial architecture, did he begin that phase of his work, which would occupy him for the next 40 years. The events of World War II and the Holocaust awakened in him a sense of his own Jewish identity. He was, he wrote later, “an agnostic who was converted by Hitler.”

Goodman took to the work with the fervor of a modernist. He disliked the backward-gazing architecture that marked most synagogue architecture in the 20th century – or most ecclesiastical architecture, for that matter. Synagogues tended to refer to historical styles, with neoclassical or Gothic flourishes that drew direct lines back to Ashkenazi Europe, or Moorish revival elements suggesting a lineage stretching further back to the Holy Land. Goodman didn’t mince words about these earnest recreations. “Imitation cannot be as good as the real thing and so is an abomination,” he wrote in 1949. “In design and structure, the work must be of our time.”

The time was America in the post-World War II era, and according to Goodman, over 1,800 new synagogues were being planned across the United States. Many of these congregations were born in dense urban settings, and were moving with the baby boom into less densely populated urban and suburban settings. One such synagogue was the Temple of Aaron, a Conservative congregation that had served St. Paul’s Jewish population since the early 1900s. Jewish St. Paul was focused on the West Side flats in the 19th and early 20th centuries, and had shifted to Highland Park after the war. When their 40-year-old building, located at Holly Avenue and Grotto Street, burned down in 1952, the disaster created an opportunity to create a new building. The congregation commissioned Goodman, and in 1956, the new Temple of Aaron opened on Mississippi River Boulevard in the Highland Park neighborhood. It is a building whose design and structure, as Goodman stressed, was unquestionably of its time.

The stretch of the parkway between Hartford and Highland is full of monuments, architecture and public artworks, devoted primarily, though not entirely, to the Jewish experience in America. The Temple of Aaron itself, in addition to Goodman’s architecture, is home to three other artworks by renowned abstract postwar artists and contemporaries of Goodman. The overall effect of Goodman’s architecture and the artwork that accompanies it is optimistic, cosmopolitan and forward-looking.

Before diving into that however, a more unconventional monument to the Jewish experience in America is worth looking at. The 740 River Drive Apartment towers, built in 1961 in that same postwar boom and towering over every other structure nearby, are visible from the entire river valley. It was, for many years, the home of possibly the most famous Jewish woman in America, or at least the most widely read: Pauline Esther Friedman Phillips, better known by her WASP-y pen name, Abigail Van Buren (though she took the first name for King David’s third wife and mother of Daniel), creator of the “Dear Abby” advice column. Van Buren was born in Iowa to Russian Jewish immigrants, grew up reading Yiddish publications, and later married the scion of the Phillips beverage empire in Minneapolis. 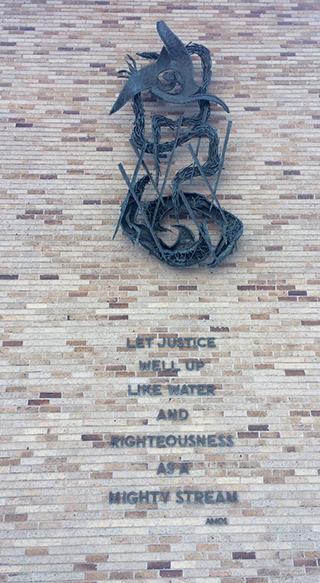 Along with her identical twin sister (and lifelong rival), Ann Landers, Van Buren brought a witty, modern-ish, and vaguely progressive sensibility to the Puritan newspaper readers of America on matters of divorce, sexuality, alcoholism, pregnancy and other topics. Her ability to be both sympathetic and cutting at once – and in a way that favors the pithy one-liner as vehicle for conveying that – seemed flavored by a sensibility one might have developed reading Yiddish language newspaper columnists. There’s a touch of Jewish humor in her writing that also flavored much of American postwar culture, and that’s present even if white suburban newspaper readers didn’t recognize it. It’s fitting to imagine Dear Abby up in that tower, looking at the rows and rows of Highland Park bungalows and ranch houses below and imagining how she might address the countless domestic dramas playing out in them.

Highland Park is somewhat of an outlier in the urban fabric of St. Paul. The Ford plant is the center of gravity in the neighborhood, delaying a lot of the early 20th century development that characterizes other St. Paul commercial districts. A lot of the surrounding development has a more suburban feel than the adjacent Mac-Groveland and West Seventh neighborhoods. In this sense, the neighborhood is a perfect setting for both the 740 River Drive Towers and for the Temple of Aaron. In both cases, the materials and design are thoroughly modern and mesh with the character of the rest of the area – sparer and more airy, cooler, taller against a parking lot-strewn landscape, and more than a little suburban. Neither would be mistaken for a building set in a crowded urban scene filled with tenements and low, squat wood and brick structures.

Goodman’s design of the synagogue balances both modernist design sensibilities and religious ones. Described at the time as “a contemporary Torah Crown set in the earth,” the building has an unconventional swooping roofline that suggests careful attention paid to his peers, such as Frank Lloyd Wright and Phillip Johnson. Inside the synagogue, the shape of the exterior creates spaces and shapes that impart a sense of awe, but also flatly and unambiguously reflect the materials used in the building’s creation – unadorned gray and brown brick. The shapes and materials don’t, in true modernist sense, refer to anything other than themselves, and simply let the way they’re used evoke a response in the viewer. In this sense, the Temple of Aaron is a cousin to other postwar ecclesiastical structures in the Twin Cities constructed at the same time, such as Erich Mendelsohn’s Mount Zion Temple, or Eliel and Eero Saarinen’s Christ Church Lutheran. 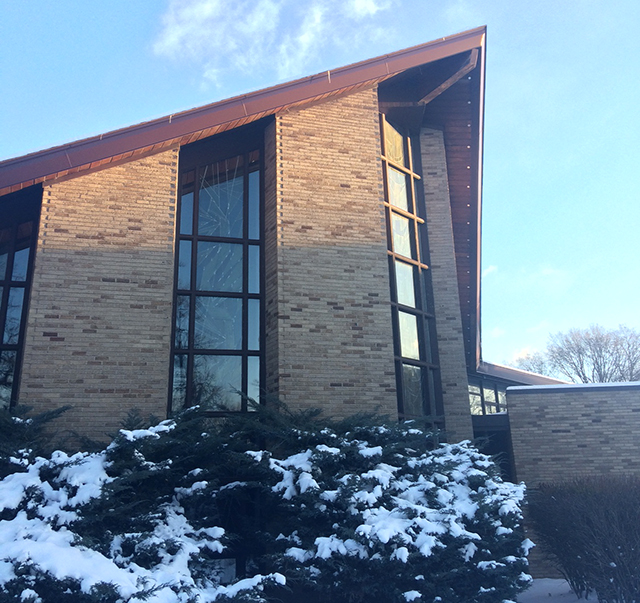 Goodman also brought in a few other artists to create work for the exterior to complement the architecture. Ibram Lassaw and Herbert Ferber, two New York sculptors associated with abstract expressionism, are responsible for the abstract sculptures that are accompanied by text from the books of Isaiah and Amos. Both men were Jewish, and the text used to accompany their work speak to the modernist sensibilities of the postwar Jewish congregation – particularly the text from Amos accompanying Ferber’s work, “let justice well up like water.” Goodman and Ferber’s work together positions the synagogue within contemporary Judaism as a bulwark against injustice, a response to the atrocities of World War II and Nazi Germany. It’s in the spirit of Goodman’s assessment of how the synagogue should function, only a few years after: “In design and structure, the work must be of our time.”

Near the synagogue is a scenic overlook that’s home to two other sculptures, created decades later. They’re not explicitly connected to the art or architecture of the Temple of Aaron, but do interact with it in interesting ways. About 10 years ago, a symposium called Minnesota Rocks brought an international coterie of sculptors to Minnesota to create public artworks dispersed throughout the city.

Two of these are by the German sculptor Jürgen Zaun. Entitled Sentinels (“Wachen” in German), that’s exactly what they are – two blocky stone sentinels, humanoid in appearance, keeping watch over the river valley (or the parking lot, as one online commentator complains). Zaun wrote at the time that he was responding specifically to the location of the river on the plot of land, which is administered as part of the Mississippi River Gorge. The sentinels, though, serve a dual purpose – their gaze falls on the river, but also seems to fall upon the nearby synagogue. 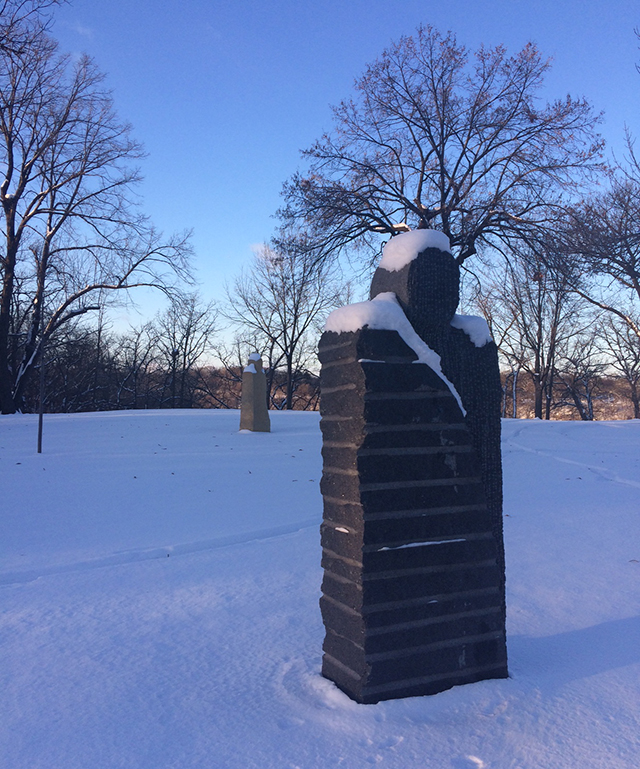 Given the circumstances under which the building was conceived and constructed, and the human events Goodman and the congregation was responding to, the idea of having silent sentinels on watch nearby, standing guard, seems like another way of whispering “Never again.”

Note: Information about the Phillips family has been corrected. They were (and are still) Jewish, not Catholic.