Last month on Instagram, I noticed a local photographer named Ethan Jones was posting regular shots of a high-rise office building in downtown Minneapolis. He never identified it by name, and I am embarrassed to say I couldn’t quite place where it was, exactly. The shots were framed beautifully: The building itself is a perfectly attractive example of midcentury modernism, but unlike a lot of such buildings that have to contend with the messiness and chaos of their surroundings, this one stood against an almost completely empty landscape. It actually looked a lot like an architectural model, almost too perfect and too clean for the griminess of the real world.

Eventually, I worked out from the surroundings that it was the tower at Washington and Marquette – 100 Washington Square, which I had probably passed a hundred times on my way to the library or Stone Arch Bridge and had never given much thought to. That’s probably due in part to the fact that I don’t like walking through that part of downtown – you have to meander through a bunch of enormous parking lots, and despite the nearby Northwestern National Life Building and central post office, it’s devoid of much interesting to look at.

On my little phone screen, though, Ethan’s photos of 100 Washington Square imbued the building with a quality I had missed in person. It seemed instantly iconic: that load-bearing corner columns creating an illusion of the upper floors floating 40 feet over a green marble center shaft, and the white exterior catching all sorts of atmospheric light and reflecting it back in alternately warm and cool tones. 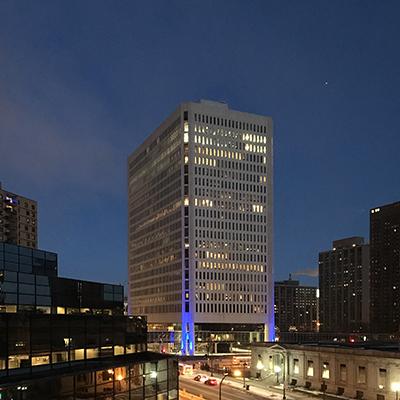 Right about this same time, among the local designers and chicer downtown workers I follow on Instagram, photos of a new coffee shop called Penny’s began appearing. Occasionally, someone would make the (possibly tongue-partway-in-cheek) assertion it was the “most Instagrammable location in Minneapolis,” and the shots support that dubious distinction: open views of the Northwestern building, deep green marble walls, and a wonderful central chandelier floating over a cathedral-like concourse, each feature more photogenic than the next. It turns out Penny’s, too, is located in the first floor of 100 Washington Square. It also conveys an instantly iconic quality when viewed from a photo taken by a smartphone. Inside and out, 100 Washington Square photographs beautifully.

Instagram posts are often working at cross-purposes. There is a diaristic, tossed-off quality to a lot the images that can give an interesting peek into a person’s daily life or an artist’s creative process. However, there’s also a meticulous editing and framing that, when done well, makes someone’s life look as cozy as a photo in the sort of high-end magazine you get a free subscription to when you become a Walker Art Center member (and, when done incompetently, gives domestic interiors the airless, antiseptic quality of a 1970s dystopian sci-fi thriller). 100 Washington Square, the consummate modernist dream of an office tower, rewards that framing enormously. In fact, there’s something about modernist architecture generally, with its clean lines, unfussiness and geometric precision, that translates exceptionally well into a digital pictorial format.

100 Washington Square is a companion to the Northwestern National Life Building, built by the same architect, Minoru Yamasaki, for the same corporation, about a decade and a half apart. Yamasaki is best known for the first World Trade Center, destroyed 15 years after his death in 1986. These two buildings bookend the redevelopment of the Gateway District: the Northwestern National Life Building was the first one up (and by far the best thing to come out of that particular urban experiment), and 100 Washington Square was one of the last before the skyscraper boom of the 1980s and ’90s. 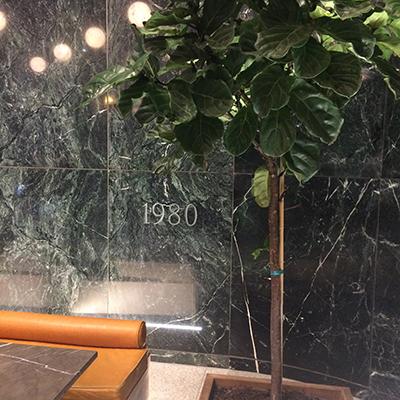 MinnPost photo by Andy Sturdevant
The 1980 cornerstone, once outside and now in the corner of the coffee shop.

The tower, which was just remodeled and is now home to several tech companies, is often described in media accounts as an “eighties office building.” That makes it sound like some leaky glass and steel pile you’d find in a suburban office park, though. It’s much better than that. The building was completed in 1981, but in form and execution, it’s a perfect extension of the architectural ideals of the 1960s and ’70s. Compare Yamasaki’s tower to something like 33 South Sixth Street, built at almost the exact same time. They share some similarities, but whereas the latter serves to answer the question of how crappy beige-tinted concrete can look (A: extremely, nauseantingly), 100 Washington Square has a lightness and effervescence emphasized by the modesty of its size and the illusory space beneath it, as if the bulk of the upper levels rest on air. 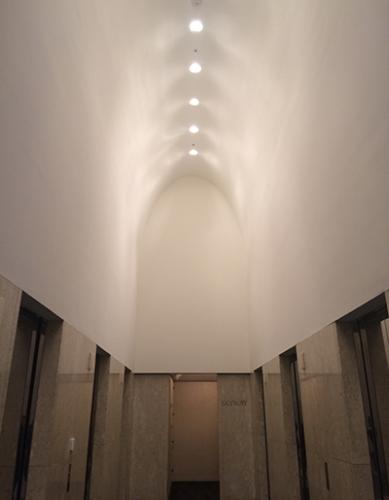 Side-by-side, you can see why Yamasaki is a master in the field, and an architect whose reputation has, all things considered, steadily improved since his death. He seems more humane than some of his more severe modernist contemporaries. Some of this may have to do, of course, with the destruction of his most prominent creation, but the World Trade Center was also the most effortlessly photogenic buildings in the world. This compilation of WTC cameos in the films of the ’70s, ’80s and ’90s hints at the depth of the power those buildings had over the popular imagination. Their scale was only part of that; the simplicity and purity of those lines against the cacophonous skyline played a big part.

Compared to Yamasaki’s better-known buildings, including the Northwestern National Life Building next door, 100 Washington Square is a comparatively minor work. After having spent some time with it, though, I wonder if it’s not one of the most underappreciated buildings in downtown Minneapolis, particularly in light of so many mediocre high rises that followed.

100 Washington Square opened to mixed reviews in 1981 – the Tribune’s architecture critic, Bernard Jacob, described it as “stolid and elephantine.” He found the height underwhelming, and thought the narrow windows were somewhat oppressive. The layout, Jacob quotes Yamasaki as saying, “creates the separation between the exterior and interior and when the occupant goes outside he can more fully appreciate nature and being outside.” What purpose does this serve, Jacob wrote, in a building so centrally located in the urban core?

I talked to Ethan, the photographer whose work I mentioned at the beginning on this column, about what prompted his interest in shooting it so often. He lives in a high rise nearby, and it’s part of the landscape of his daily life.

“I get up,” he told me, “and it’s there. It’s not surrounded by much. A lot of buildings don’t have the same singular quality that’s so interesting about it – that loneliness is part of the intrigue.”

The minimal arrangement of narrow windows that bothered Jacob is part of what makes the exterior so captivating, however. “It’s one plane,” Ethan says. “It’s reflecting the atmosphere, but in a much different way than glass. The color temperature of the light, depending on the weather, creates the sense that the building is coming forwards, and other times like it’s falling back.” 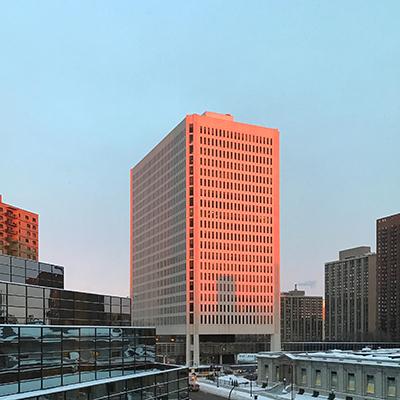 Photo by Ethan Jones
… in the morning …

Yamasaki was intentional about this. Any great building, he wrote in 1981, “was designed so that the changes in light experienced from sunrise to sunset created maximum impact, no matter what time of day.” A major problem, he wrote, “is the monotony of the facades used for higher buildings. Whether they be all glass, mirror glass or metal, the very flatness of these structures tends to make for dull facades.” The solution was to make use of modern techniques and materials to create a sense of being solidly inside a structure, and not attempting to create the illusion of the outdoors with glass exteriors. 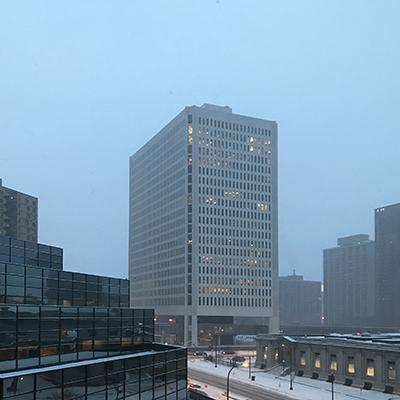 Photo by Ethan Jones
… during snowfall.

The white exterior of 100 Washington Square reflects the snow, fog or sunlight around it in surprising and nuanced ways. It even makes use of the bleakness of the surroundings – what the Tribune’s Jacob describes as “cheerful openness” (and what I describe as “grim emptiness”) around the building creates a sort of staging area. Yamasaki found the presence of utility wires and poles to add a great deal of visual noise to the silhouettes of American city streets, and hoped that these and “ugly parking lots” would eventually be replaced by small parks and green spaces. It’s in this type of environment that a building such as 100 Washington Square thrives – this environment, and in the snap of a smartphone camera.

100 Washington Square: the consummate modernist dream of an office tower