The world as we see it on the maps on the screens of our smartphones – which, if you’re like me, is one of the primary ways you experience it – isn’t always what it seems. Occasionally, the ghostly algorithmic cartographers of Google Maps will put some geographic or infrastructural feature across your path that exists on screen, but doesn’t seem to relate to anything you see once you look up from the your phone.

One of the best examples of this is found looking at the area around West River Parkway in the Warehouse District of downtown Minneapolis, near Eighth Avenue North. Here, you can trace an inlet from the Mississippi River that attenuates into a thin blue stream about the same thickness as Minnehaha Creek, several miles south. This stream seems to run under the parkway, right between twin icons of Minneapolis haute cuisine Borough and Bar La Grassa, and then follow a course down Eighth Avenue. It runs beneath Fourth Street, then I-94, and then the Olson Highway. It follows a series of sharp, rectilinear turns through North Minneapolis, finally meeting up with Bassett Creek near Van White Memorial Parkway. From the look of the map from above, you could walk alongside this stream in a pair of waders, through parking lots and under roads. This ghostly water feature is marked “Bassett Creek.”

Switch to satellite mode, though – or better yet, visit in person – and you’ll see it’s not there.

Not on the surface, anyway. This leg of Bassett Creek is there, but it’s buried well beneath the surface of your path, entombed in a culvert over a century old and 80 feet down, in the remains of a deep valley that once carried the prehistoric Mississippi River. That’s where it drains, too, and not the opposite – the creek originates at Medicine Lake, and runs aboveground for miles before it disappears beneath the ground somewhere around Dupont Avenue and breaks off into a few branches. Why this particular branch shows up on Google Maps so prominently is unclear, but it’s a good excuse to follow a meandering path through the city trying to walk along the banks of the creek above.

Many have followed the same path, but below. Bassett Creek is sort of legendary among certain subsets of the Twin Cities population, or at least for those in the middle of the Venn diagram where interests in neglected histories, environmental science and reckless urban exploration converge. I remember hearing stories about Bassett Creek for years, the buried creek beneath downtown that may or may not have been the one-time northern equivalent of Minnehaha Creek. 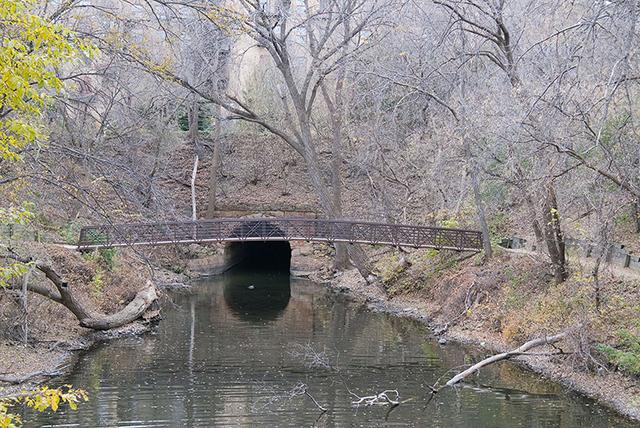 CC/Flickr/Tom Westbrook
Where Bassett Creek empties into the Mississippi.

In fact, Bassett Creek has been the subject of more literary accounts than other, better-known water features of the city. Meleah Maynard’s 2000 City Pages cover story is perhaps the definitive account of the creek’s history and present. Besides the dozens of nameless scribblers who wrote about Bassett Creek, the so-called “Venice of Minneapolis,” for the city’s dailies before it was buried in the 1910s, a good bibliography of the creek would also include contributions from city park historian David C. Smith, urban explorer Greg Brick, and the indefatigable men and women of The Explorer’s Club, who produced a semi-quarterly zine of the late 1980s, one issue of which was devoted to exploring the submerged creek. It’s Bassett Creek’s non-visibility – its there-but-not-there quality – that makes it such an attractive subject. I wonder how many frustrated would-be explorers have seen it on their iPhone screens while waiting for an Uber on Washington Avenue, and tried to drunkenly chase it down the alley behind Bunker’s, only to come up empty-handed.

Urban explorers have most prominently turned out accounts of the entombed creek, complete with all sorts of fascinating reports: waterfalls (one dubbed “Niagara”), mushroom colonies, disgusting floating sex trash from Déjà Vu, vestigial sawmill-era logjams, early building foundations, monstrous spiders, and schools of freed goldfish who’ve survived execution by toilet. The mouth of the creek near the river is undeniably entrancing, a gaping, stone-lined medieval hellmouth that begs to be explored.

I have not the budget, training or abilities to make that particular trip, so I leave those accounts to writers like Greg Brick, who recounts his various trips in a chapter of his “Subterranean Twin Cities.” We’ll just be following it above the surface. Considering how often you need to traverse major roads and highways, it’s probably almost as dangerous above.

There’s somewhat of a belief, evident in the body of literature, that Bassett Creek was a sort of squandered recreational and beautification opportunity for the area. That may be true, but if it was, it certainly was not the case by 1870. Even accounts of the valley from that early time in the city’s modern history veer between “open sewer” and “industrial saw mill hell.” (Bassett, incidentally, was the name of the New Englander who built the first sawmill on the banks in 1850 and set the creek on its half-century run of industrial use.) 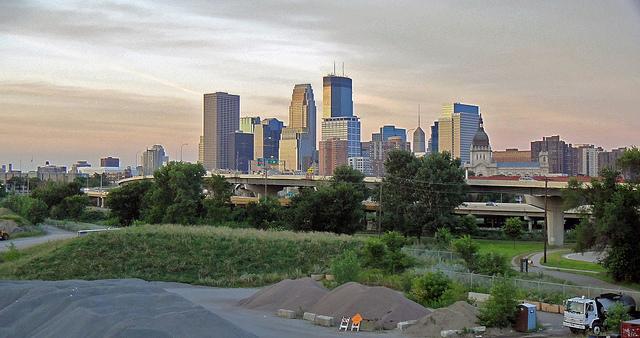 CC/Flickr/Payton Chung
The Bassett Creek trail. The creek itself is far below here.

By 1913, when it flooded badly and stranded a number of families living along the banks, its title as “the Venice of Minneapolis” in Tribune headlines was completely immersed in bitter sarcasm. The stream was covered between downtown and the near northside, and a series of rail lines, mills, then oil refineries and interstates sprouted atop the area. Around Glenwood, the area atop the buried creek became home to Sumner Field Homes, some of the first modern public housing in the city. And though the stream couldn’t be seen, the soil retained a sogginess that made building on the land very difficult over the course of the last half of the 20th century. The land atop Bassett Creek, at first heavily Scandinavian, then Ashkenazi Jewish, then African-American, tended to be sequestered and segregated from the rest of the city by a succession of industrial sites and then highways and sound walls. Recently created lakes around Van White Boulevard are maybe the first reminder in a century of this area’s wetland origins.

This leg of the stream runs beneath an interesting historical plaque located at Aldrich and Highway 55, about halfway between the mouth of the creek and where it goes underground. The near northside has been an African-American community for nearly a century, and the marker noting educator and reformer Gertrude Brown is located near the onetime location of the Phyllis Wheatley House, which was one of the many buildings razed for I-94 in the 1960s. Gertrude Brown presided over its founding in the 1920s. 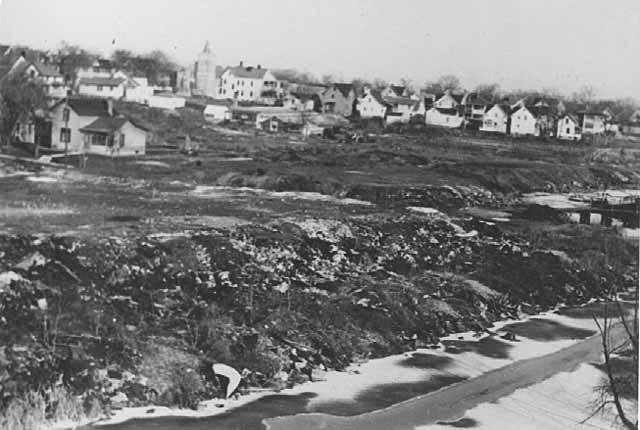 Courtesy of the Minnesota Historical Society
A stretch of the uncovered portion of Bassett Creek in the 1930s.

The Phyllis Wheatley Community Center remains a northside institution, thanks to Brown’s leadership in its early days. Her hiring was a major coup for the organization. Born in North Carolina to former slaves, she was involved in education and organizing there, Atlanta and Ohio in the 1900s and 1910s, and received a degree from Columbia University in 1923. The next year, she relocated to Minneapolis to run the Wheatley House, a community center, boarding house and educational organization that served as the nexus of African-American life in Minneapolis. Under her leadership, the organization grew exponentially, expanding into a newer, larger building, hosting local meetings of the NAACP and Pullman Porters union, and hosting Marian Anderson, Langston Hughes, and Paul Robeson when they visited the Twin Cities.

Cutting across the surface over the creek, it’s impossible to know there was ever anything other than relatively flat, developed urban landscape here. Topographically, there’s little trace of any sort of valley. That submerged creek has had a great deal to do with how the stretch of city between the river and the main stretch of Bassett Creek aboveground has been alternately abused, built over, utilized and lived on for a century and a half. It’s fitting that it shows up on Google Maps, not as a navigable pathway, but as a ghostly electronic reminder of how the human relationship with the natural world defines the shape of a city, even when it’s buried 80 feet below the earth.