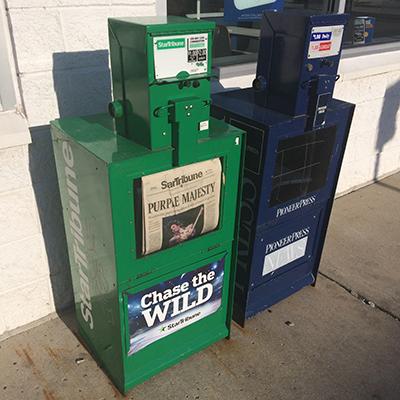 MinnPost photo by Andy Sturdevant
Written on the landscape.

The day after Prince died, I was standing outside the White Castle on East Lake Street eating a cheeseburger and waiting for the No. 9 bus. Of all I’d seen and heard in the last 24 hours, on- and offline, it was an errant glance over to the green Star Tribune newspaper box that really re-emphasized the enormity of the whole situation to me.

PURPLE MAJESTY, read the headline. Below that was Prince, mid-skweeeeee on an electric guitar solo, peeking just torso-level over the edge of the window containing the newspaper. I reflexively shot a photo of it on my phone – I knew this was a memory I wanted to save. For all the ground print media has lost in the past 10 or 15 years, you can still see a headline on a street corner and know generally what the biggest news of the day is. (Or the biggest news of the day before, at least, since you’ll undoubtedly have already seen it on Facebook or Twitter.) Seeing Prince through that window, though, embalmed in newsprint and the headline’s typeface at the size typically used for election results or military conflicts, really drove the point home: Yes, this was a truly big deal for my city. It’s physically written on the landscape.

The newspaper box, lined up in a row with others on a street corner or by a bus stop, has been as an establishing shot for scenes of urban life for 70 years. It’s a code that both longtime citizens and newcomers use. Longtime residents know the color code – green for the Strib, dark blue for the PiPress, red plastic for City Pages, yellow plastic for Lavender. Going back a little further, people might recall black plastic for Vita.mn, green plastic for The Onion, or yellow metal for the Tribune.

The illustrator Christoph Niemann brilliantly condensed this code to its essence in a photograph he made for the New York Times several years ago. It depicts a row of 1×1 Lego bricks, lined up on a slate blue strip, and labeled “Sidewalk, west side of Eighth Ave., between 39th and 40th St.” Each colored block is labeled: The L Magazine for an orange brick, Wake Up NY for a red one, The New York Times for a green one, The Learning Annex for a white one, etc. A New Yorker would recognize them all. A Twin Citian could likely do the same for her own hometown papers in a blind, color-only lineup.

It’s a sign to newcomers, too: What sort of media environment have you entered into? The very first public action I took as a new Minneapolis resident, once I’d unpacked the U-Haul, was reaching into a plastic red box and pulling out a City Pages to figure out where I should eat dinner. For years, when traveling to a new a city, I’d use newspaper boxes as guide. What sort of alt-weekly did this place have? Was it one of those cities with two? How many dailies were there? What sort of local political spectrum could I divine from the prominence of alt-weeklies, stodgy dailies, or unhinged right- or left-wing broadsheets? It’s all there on the street, for the user to choose from. 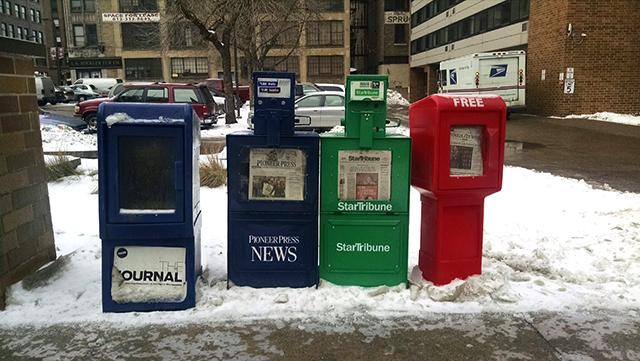 MinnPost photo by Andy Sturdevant
Four downtown regulars: the Journal, PiPress, Strib and Daily. The Strib owns green; the others share colors with their competitors.

“As long as this avenue of communication remains open,” wrote Justice John Paul Stevens in a 1992 Supreme Court ruling involving news racks in public spaces, “these devices continue to play a significant role in the dissemination of protected speech.” This is also written in the Minneapolis city charter: news racks “maintain and preserve freedom of speech and freedom of the press.”

Mixed in with the papers and alt-weeklies are the boxes with other papers you see but most likely don’t pick up regularly: Among others, there’s Kelly green for the Employment Guide and blue for Job Dig (once described in this column as “the most indestructible feature of the urban landscape”). There’s also the beige and green boxes containing the free housing and rental guides, with little peaked plastic roofs in the Colonial Revival style. All of them are subject to the same licensing requirements through the cities of Minneapolis and St. Paul. The cities don’t differentiate between delivery devices for hard news and suburban apartment listings, making a lineup of boxes not a lot different from your  average Facebook feed: It’s all mixed in there together, one right on top of the other. 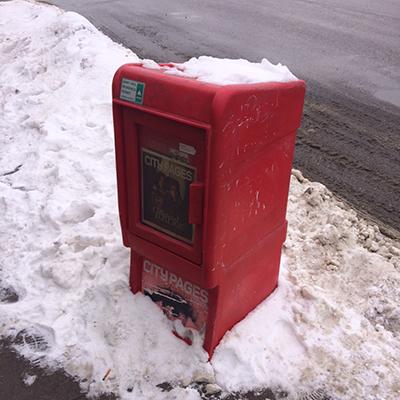 Licensing aside, there are two different types of boxes. There’s the plastic “honor” boxes, which contain free publications and contain a few dozen of them, stacked on top of one another.

That includes those house-shaped boxes, mostly manufactured by a plastics company in Georgia that introduced them several years ago. Despite having dubious contents, and often being either empty, covered in graffiti or stuffed full of trash, these types may be my favorite. They’re an aggressively tacky detail that serves as a kind of bulwark against city streets looking too tastefully done up. Certain city neighborhoods are full of expensive boutiques and farm-to-table restaurants and windows full of chic Nordic-inflected consumer objects, but no matter how tasteful these city blocks may become, there’s probably a couple of a dorky house-shaped plastic boxes on the street nearby.

These little boxes are maybe the last, dying gasp of what’s called mimetic architecture – buildings that take the shape of the service or good they provide, like a hamburger stand in the shape of a giant hamburger. Perhaps these boxes are also unsung, down-market ancestors of the noble Little Free Library. In fact, the company that manufactures these mimetic boxes now also offers a plastic Little Free Library box that’s almost identical to its real estate tabloid brethren.

There are also the metal newspaper boxes for the Strib and the Pioneer Press, which at one time accepted quarters, but now commonly allow for credit card swipes. The credit card technology for these boxes is one of the only pieces of good news in the past decade for the news rack. They’re disappearing from city streets quickly. They’ve held on more tenaciously than their free plastic counterparts, but bus stops, street corners and sidewalks outside the two urban cores where you might have seen a small cluster of City Pages, Strib, JobDig and Employment Guide boxes even five years ago are now free of them.

A small Texas wire goods manufacturer led by Arthur Kaspar introduced the pay boxes in the 1950s. The Kaspar Sho-Rack that Arthur created with his son Don was the industry standard for 60 years, including for local papers in Minneapolis-St. Paul. As of early 2015, however, Kaspar ceased production of these items, and Kaspar’s wire manufacturing parent company that had preceded the Sho-Rack products eventually outlived it. You can still find the Sho-Rack nameplate on the back of a lot of these boxes.

Sho-Rack’s primary competitors, California’s K-Jack and Texas’s Mechanism Exchange and Repair, still manufacture and service coin-operated news racks. You may recognize the K-Jack KJ-TK80 on your walks around the city – those are the ones with the boxy “top hat” to collect money, the industry standard created for East Coast newspapers whose machines do constant battle against thieves and inclement weather (“There is no need to clean snow off the rack while collecting money,” K-Jack’s catalog states). Still, as persistent as these forces are on the destruction of the humble news rack, there’s little an industry can do to fight encroaching obsolescence. 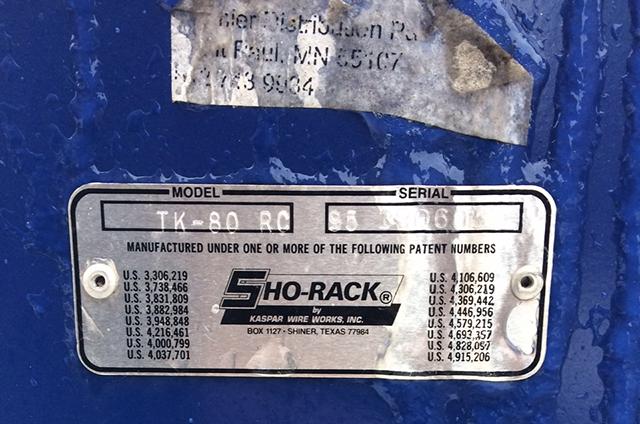 MinnPost photo by Andy Sturdevant
The TK-80, Cadillac of the coin-operated newspaper line. Snow and thieves can’t touch it.

At the moment, it’s not actually clear how many news racks are located in Minneapolis. They’re mostly in corrals (“stable clusters,” as the municipal code has it) in only the most heavily used commercial districts – downtown, Uptown, Washington Avenue. The city’s recent pedestrian master plan described most of the news racks around town as “poorly maintained and improperly placed to restrict pedestrian movement and accessibility.” Many people, from a quick scan of the internet, would agree with this assessment. “They are garish, often laden with graffiti, often tipped over by drunks or a stiff wind, and vandals scatter their contents about,” sniffed one Flickr user, under a very lovely photograph he’d made of a row of them.

In fact, the city no longer maintains a master list of existing racks. “A small amendment in 2009 stalled the enforcement of the [news rack] ordinance so that the local newspaper industry could try and be self-regulating,” Communications Specialist Mehgan Lee at the City of Minneapolis told me. “As it stands now, when the city observes a news rack that needs attention or receives a complaint about one, we just call it in and the industry voluntarily goes out and corrects the problem, and that has been working well for years.”

The problem may solve itself entirely in a few years. Soon enough, newsracks in both the honor-style and coin-operated styles may be as rare to find in an American city as a newsie in an applejack cap and short pants shouting Extra! Extra!

The lowly newspaper box: a color-coded holder of memories and guide to the urban scene