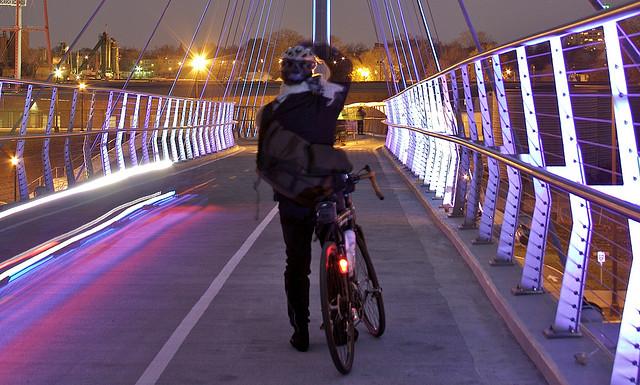 CC/Flickr/Tony Webster
It’s great to be a cyclist in the Twin Cities.

As everyone knows by now, it’s great to be a cyclist in the Twin Cities. From folks ditching their cars for bikes, to Minneapolis and St. Paul creating nation-leading bikeway plans, pedal power has a lot of momentum here. As transit-oriented developmenthits its stride along the Green Line and other key corridors, the bicycle looks to figure even more prominently into our local transit mix.

The Twin Cities isn’t only a leader in bicycle use, however, but also a major innovator in bicycle design and technology. The seven inventions profiled below have, or will have, an impact on the local and global cycling industry. And the pace of innovation shows no sign of slowing down.

Two generations ago, repairing a bike meant getting on your hands and knees. No more. In 1963, cycling-crazy St. Paulites Howard Hawkins and Art Engstrom invented the world’s first bicycle repair stand, Model PRS-1. Suddenly, accessing bike chains, spokes, gears and especially tubes was a snap. The duo formed a company, Park Tool, and began marketing their innovation to bike shops and riders around the Twin Cities and Upper Midwest. Schwinn Bicycle Company was an early customer.

PRS-1 was a simple design: The device’s clamps lock on to the seat tube and raise the bike off the floor, allowing arm-level access. “The original version actually held the bike upside down,” says Paul Schoening, Park Tool’s marketing director. The next version, PRS-2, flipped the bike right side up for the first time.

Though Park Tool has long stopped making the PRS-1, the company wouldn’t be where it is today without that original stand. The company distributes repair stands, tire pumps, tool boxes and a huge range of bike parts in more than 70 countries, with more in the pipeline. Park Tool’s constantly growing product catalog has more than 300 entries. 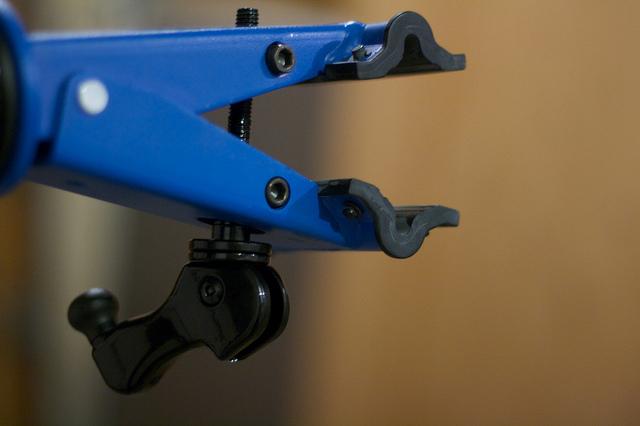 CC/Flickr/Will Vanlue
The Park Tool stand’s clamps lock on to the seat tube and raise the bike off the floor.

“We’re basically like Microsoft in the early days of the PC era,” says Schoening. “We’re the global leader in a rapidly growing industry.”

But Park Tool isn’t resting on its laurels. The company has a robust R&D division that works alongside its Twin Cities manufacturing operation, constantly refining old designs and inventing new ones.

“We use the cash flow from our catalog of legacy products to fund exciting new research,” says Schoening. Among the most promising: The PRS-33, a mobile bike repair stand with a motorized drive unit that lifts bikes into place and moves them horizontally for easy access. The PRS-33 is particularly useful for electric bikes (more on those below) and mountain bikes, both of which are increasingly popular in the Twin Cities.

“The PRS-33 saves a lot of strain on shop employees’ backs,” by eliminating the need for heavy lifting, says Schoening. 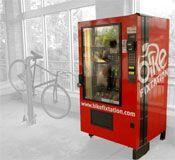 Chad DeBaker founded Bike Fixtation to solve a very specific problem most cyclists experience at some point: You suffer a flat or some other mechanical issue, don’t have the right tools and can’t find an open bike shop nearby. That ends your ride, forcing you to walk a long way or call a cab.

Bike Fixtation’s first product, launched in 2011, was a high-security vending machine. Because its contents—basic gear such as spokes, tires, tubes, pads—can be valuable, the vending machine is heavier and sturdier than a typical food vending machine. The vending machine can also be stocked with accessories, like trail maps and hand warmers. You pay for what you need, install it on the spot and go.

The contents of each Bike Fixtation vending machine are slightly different depending on what the company’s clients order. Currently the machines are located at the Uptown Transit Station and Lake Street Blue Line Station. The company has also installed machines in Brooklyn, the Bay Area, Miami, Canada and Australia.

Bike Fixtation just released a new product: a wall-mounted Public Toolbox that contains nine common bike repair tools, each attached to a secure base by a strong aircraft cable to prevent theft. The Public Toolbox is a complement to the company’s vending machine, offering a valuable aid to riders who don’t carry their own tools. The device features a QR code that cyclists can scan for repair tips and tricks.

Early interest in the Public Toolbox has come from “apartment building owners who are installing or enhancing a secure bike-parking room with limited space, and want to provide their tenants with some basic bicycle-repair tools,” says Andy Lambert, director of sales and marketing. Currently most Public Toolboxes are located in private apartment buildings.

Though it’s not the world’s first-ever mobile toolbox for bike repair, the Public Toolbox design is markedly different from previous versions, with tangle-proof lines and customized branding for buyers who want to put a corporate logo or name on their toolbox. It’s also suitable for use in cold and wet weather, a necessity in Minnesota.

Minneapolis-based Velolet bills itself as “the global bike rental hub.” Founded in 2010, the company connects bike-less people with bicycle rentals in all 50 U.S. states, several Canadian provinces and an assortment of overseas territories.

Velolet partners with Freewheel Midtown Bike Center and Penn Cycle to provide riders with a variety of bike styles, not just the sturdy, practical bicycles available through Nice Ride and other bikesharing programs. The company shares daily and weekly rates up front. So users just specify rental dates and location, hit search and voila! A list of available bikes appears with shops and rates spelled out clearly.

Though Velolet is great if you’re traveling somewhere by plane and can’t bring your bike, it’s also useful here at home. If you want to take a longer ride on a rented bike and don’t want to be constrained by Nice Ride geography, you can go as far as you like on a Velolet rental. And if your bike is in the shop for an extended stay, Velolet offers access to very nice bikes at reasonable rates.

When Minneapolis Electric Bike Company founder Clint Stockwell learned that a Chinese company was attaching powerful lithium-ion-phosphate batteries to bicycles and selling them to newly affluent consumers across Southeast Asia, he wondered why no one was getting rich marketing electric bikes on our side of the Pacific. The batteries could be recharged in a regular outlet and didn’t seem to degrade over time, meaning they usually didn’t need to be replaced (barring certain kinds of abuse). 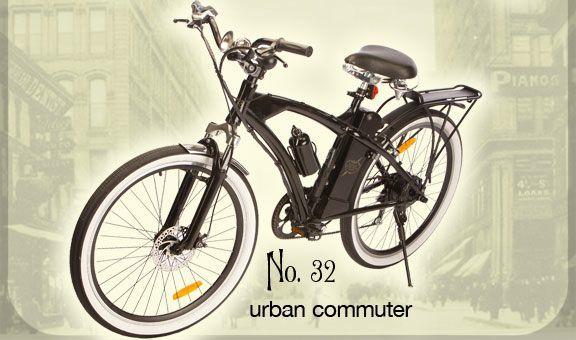 Bike-friendly Minneapolis seemed like a perfect place to start an electric bike company, so Stockwell got in touch with the Chinese manufacturer and began importing its bikes. The original design placed the battery engine behind the seat for stability. Riders can pedal manually, like a normal bike, or cycle through one pedal rotation and then flick a throttle to engage the electric motor. That turns the wheels without input from the rider, and automatically adds power on upslopes to maintain speed.

But Stockwell found that the imported bikes weren’t up to American riders’ standards, so he made a lot of modifications. Virtually every part of the improved bike is adjustable, meaning it can be configured as a cruiser, road bike, racer and so on. Stockwell also limited the bike’s battery-assisted speed to 20 miles per hour, though riders can go faster than that on a downslope.

He also lobbied for a legal change that would classify electric bikes as non-motorized vehicles, allowing them on bike paths and trails. “We have 2,000 miles of trails in the Twin Cities area,” he says, “so that was really important.” A significant portion of Stockwell’s business now comes from renting bikes to tourists and bike-less locals. But he also sells them to commuters and car-less folks.

Though the electric bike miffs some traditionalists, Stockwell’s goals are closely aligned with theirs. “I want people to pedal these bikes and get a workout,” he says, “and if an electric bike can eliminate that unnecessary car trip to the corner store, it’s hard to argue against it.”

Already known for making innovative bike racks, Minneapolis-based Dero recently released ZAP, an RFID tag that attaches directly to your bike’s frame. You can get tagged at several locations around the Twin Cities, including St. Paul Smart Trips, Recovery Bike Shop and Freewheel Midtown Bike Center. Employers that work with ZAP may also host “tagging parties” where any employees who want a tag can get one for free.

When you pass in front of a pole-mounted reader, the reader “zaps” your tag and logs your trip. You get a prize after your first 10 trips and receive one entry into a monthly drawing for additional prizes for every eight additional trips.

Dero markets ZAP to local employers that want to encourage bicycle commuting. Dero doesn’t tell employers how to use the data, but Commuter Connectionoutreach coordinator Bill Andre says the City of Minneapolis is already offering healthcare discounts for employees who regularly get “ZAPped.”

There’s no cost to riders. ZAP earns money by charging employers a few hundred dollars to place a pole on their property. 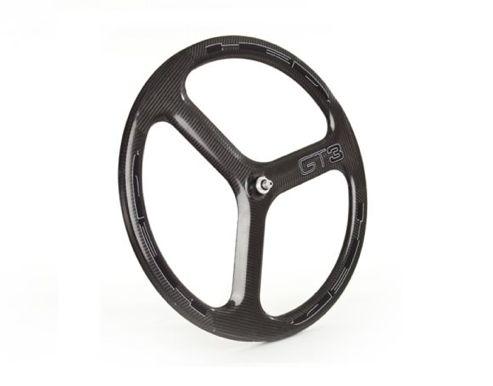 Hed, a St. Paul-based manufacturer of high-end bike components, enjoys a formidable reputation among serious cyclists. Part of the reason is the H3, a three-spoke racing wheel released back in the 1980s. The H3 has a highly aerodynamic design that reduces the bike’s profile and combats wind resistance, and is “the wheel that can’t seem to stop racking up race wins,” according to Hed.

Evolving bike designs and rider preferences finally forced Hed to release a complete revamp of the H3, called the GT3. The GT3 is 7 millimeters wider than the H3, which helps it accommodate the wider tires that most racers prefer. The rims are also less deep, about 46 millimeters compared to 54 millimeters on the old version, further reducing wind resistance.

For racing enthusiasts, the GT3’s debut is akin to the release of a long-awaited Italian supercar.

Brian Martucci is The Line’s Innovation and Jobs News Editor.

Cycling in the cities: Seven Minnesota inventions for bike enthusiasts here and around the globe