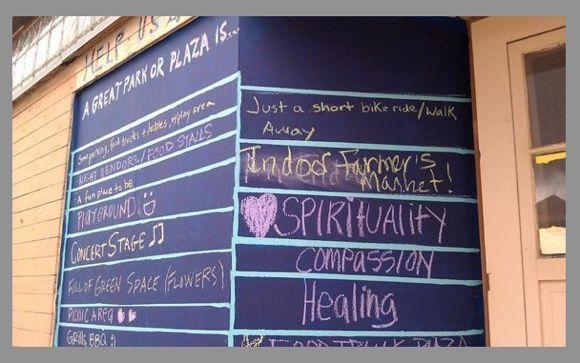 Courtesy of The Line
Wishes for Little Mekong Plaza

In June, Twin Cities’ residents celebrated the Green Line's opening with free rides, performances, activities, and restaurant and brewery stops along the new railway. What many may not have known, however, is that in neighborhoods adjacent to Green Line, community-driven planning had been under way — for almost a decade.

In order to “get out ahead of” changes the new Green Line would bring to their neighborhoods — to forge, in other words, a powerful community-generated alternative to the transit-driven gentrification that often occurs in cities — area residents, business owners, neighborhood development associations, support organizations and planning authorities got together long before the tracks were laid.

Their goal was to transform Central Corridor communities from the inside out, by boosting prosperity and creating new economic opportunities for residents. They also wanted to ensure their neighborhoods’ unique cultural characteristics and institutions were preserved.

“We knew light rail was coming, so we decided our communities needed to prepare to transform in meaningful ways from within,” says Nieeta Presley, executive director of the Aurora/St. Anthony Neighborhood Development Corporation (ASANDC).

“There was a tremendous energy and engagement” throughout the process, says Andriana Abariotes, executive director, Local Initiatives Support Corporation (LISC) Twin Cities. And change is under way because of the collaborators’ vision and planning.

While numerous transit-oriented development (TOD) projects are occurring along the 11-mile corridor, here are four that showcase the depth, breadth and possibility of community-driven TOD along and off the Green Line. “We believe this work we’ve done on a neighborhood level,” Presley says, “is a model for other light-rail communities locally and nationally.”

Twin Citians are already familiar with Little Mekong’s popular Night Markets. Organized by the Asian Economic Development Association (AEDA), the markets were held this summer in the parking lot of Mai Village, on the corner of Western and University avenues. Next year, AEDA, Hmong American Partnership (HAP) and St. Paul Riverfront Corporation—with help from Little Mekong's vendors — will transform the site into a multipurpose plaza. 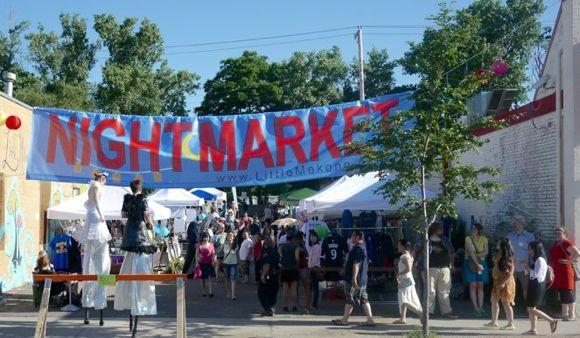 In March, local residents and business owners sketched out an ambitious vision for the new plaza, “harnessing an energy that had been building quietly for decades,” says Abariotes. Their plans include a central gathering place for vendors, performers and artists; alleys branching off to the sides for more market area; green space, public art, planters and seating. A Pan Asian Cultural Center supported by HAP would engage visitors in cultural and educational programming.

Participants also sketched out four transit-oriented plans to support the surrounding block's long-term growth. Ranging from a permanent plaza with green space and a cultural center, to a development with three-, four- and five-story mixed-use residential buildings ringing the plaza and alleys, the result will be a dense, lively node in the heart of St. Paul’s Asian community.

A publicly owned private space, Little Mekong Plaza is a model for similar initiatives along the Green Line as the project is “on the forefront of efforts along the corridor to create more and higher-quality green and open space by working with private property owners,” says Sam Carlsen, St. Paul Riverfront Corporation. The initiative “stacks culture, health, stormwater management, flexible development, public realm improvement and placemaking to create a space that strengthens the existing community and reflects its empowerment.”

The former Minnesota Milk/Old Home Foods complex is a University Avenue landmark. The imposing Art Deco structure, occupying nearly a full block between Western Avenue and Mackubin Street, housed one of the country's first large-scale pasteurization operations and supported hundreds of jobs — many held by residents of the historically African-American Aurora/St. Anthony Neighborhood.

After Old Home closed the building in the mid-2000s, ASANDC, Sand Companies and other local partners collaborated on a plan to create Western U Plaza. With early funding from LISC and support from local district councils, the Central Corridor Design Center and the Community Stabilization Project (a potential tenant), ASANDC secured a purchase agreement for the site and finalized the plans. 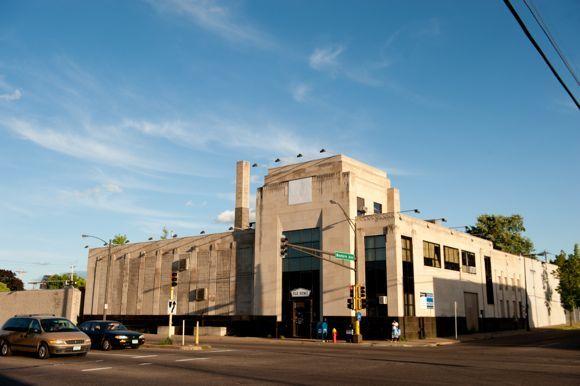 Courtesy of The Line
The Old Home complex

The new community-driven, transit-friendly project will respect the historic significance of the existing structures and create broad-based economic opportunities for local residents. Current plans include 60 units of affordable housing, eight units of market-rate housing, live-work studios for neighborhood artists, space for local nonprofits and commercial storefronts for small businesses. “We won’t consider any chain businesses,” says Presley, “unless they’ll be an anchor that broadly benefits the community.”

Initial construction on Western U has started. The development will welcome its first tenants by Fall 2015. In the meantime, ASANDC and other stakeholders have been developing a cooperative legal structure through which community members can invest directly in the project. “The goal is to build long-term wealth” among current residents “and address the generational poverty” that has afflicted the area, Presley explains.

It’s worth remembering that Western Station almost didn’t get built: It was left off the original LRT station plan and only included after years of lobbying by neighborhood groups involved in the community-driven Stops for Us campaign. By Fall 2015, the Western Station and the neighborhood it serves could exemplify equitable transit-oriented development and urban innovation through the creation of diverse residential, artistic and cultural assets.

One July night, a crew from St. Paul-based Model Cities quietly and expertly lifted three historic Selby Avenue homes clear of their foundations. The houses, otherwise destined for demolition, were at Snelling and Selby avenues where a new multifamily housing complex and Whole Foods are under construction. The crew loaded the three houses onto special trucks and took them to Frogtown — a neighborhood in need of affordable, high-quality homes.

The historic community experienced a post-recession vacancy rate that peaked at more than five times the city-wide rate in 2011, which alarmed Carol Carey of Historic St. Paul. She's one of the innovators behind Preserve Frogtown, an ambitious effort to stave off gentrification by giving current Frogtown residents a shot at low-cost homeownership — and a greater stake in the area’s prosperity. 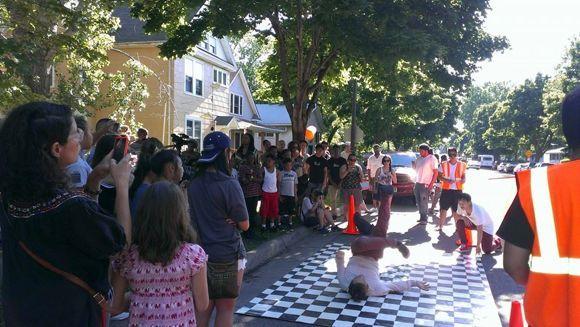 A partnership between Historic St. Paul and the Frogtown Neighborhood Association, Preserve Frogtown acquires, rehabs and markets existing houses (many built at the turn of the 20th century) at a relatively modest cost. To spot new development opportunities and create buyer interest, Preserve Frogtown and its partners reach out to local residents and developers at community events, like a recent neighborhood-wide open house,

To encourage community buy-in for each project, Preserve Frogtown solicits community input in multiple venues — Frogtown Forum meetings, social media and even from people on the street. Creative partners (including Springboard for the Arts, Irrigate and Creative Thinkers Group) help with unique marketing efforts, such as lawn art instead of "for sale" signs.

Preserve Frogtown also relies on informal “affirmative marketing” networks of local residents — families, friends, community groups — to reach first-time homeowners who lack familiarity with the real estate market. “[Each of these organizations and networks] helps us look at homes as part of a broader community ecosystem,” says Carey.

The local community participates in the rehabbing process, too. During the exterior renovations for 452 Thomas Avenue, Preserve Frogtown put different color swatches on its website and asked residents to vote on their favorite combinations. To comply with
HUD’s Neighborhood Stabilization Program while ensuring the home’s affordability, the partners highlight attributes (distinctive window features, wraparound porches) while improving energy efficiency and livability.

The Cedar-Riverside community has long embraced the concept of a multi-use privately owned public space. Because the densely populated area lacks such an amenity, local youth tend to congregate in doorways, alleys and stairwells. Meanwhile, the nearest sidewalk coffee shop is beyond walking distance for Somali elders, for whom outdoor coffee consumption (weather permitting) is a solemn ritual that reminds them of home.

Bringing the two together would solve both problems — elders sipping coffee outdoors while supervising the kids — and, in the process, could create an informal policing arrangement that lessens intergenerational tensions and benefits the entire neighborhood, says Jamie Schumacher, executive director, West Bank Business Association.

With input from local residents, and buy-in from two Somali entrepreneurs who want to create a traditional outdoor coffee space called the Horn Tea House, the Cedar Cultural Center plans to transform its under-utilized patio into a multi-use, pedestrian-friendly public plaza that provides a walking connection between the Green and Blue light-rail lines. 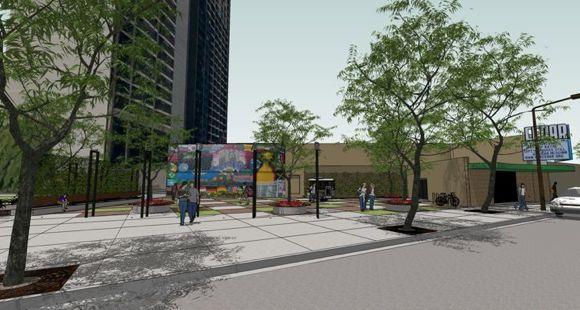 Courtesy of The Line
The proposed Cedar plaza

In the summer, the new plaza’s decorative paving stones, generous seating and simple landscape features would encourage local residents and visitors to linger. Sounds of impromptu performances, storytelling sessions and poetry readings would fill the air, along with the smell of fresh-brewed beverages from Horn Tea House's mobile cart. Somali elders would sip and reminisce as local teens queue up around ping-pong tables.

The Cedar Riverside Youth Council already wants to host outdoor activities and performances on the plaza, says Adrienne Dorn, development director, Cedar Cultural Center. But the plaza's long-term function and appearance will depend on what the community wants.

“We’re just opening the whole space up,” says Dorn, “and then waiting to see what happens.” With a full-time liaison to the Somali community, a Somali board member and increasingly robust programming for its East African neighbors, the Cedar incorporates conversations about the plaza “into virtually everything we do,” says Dorn.

Through these four initiatives and others, neighborhoods along the Green Line have experienced “an evolution in collaborative work that’s driven by a commitment to having the greatest impact,” says Va-Megn Thoj, executive director, AEDA. As a result of the processes leading to these projects, adds Presley, neighbors now see each other in new ways, from perspectives that range from respect to empowerment.

“We’ve changed the community narrative because of neighborhood involvement,” she continues, “and we’ve set the stage for accountability in demonstrating how community change that comes from within can have the greatest impact.”

As a result, community-based initiatives along the Green Line have become a model — locally and nationally — for transit-oriented development that benefits existing residents while attracting new ones. Collectively, Abariotes says, "We have built momentum for a broader conversation around our regional transit system and created an ambitious framework for equitable transit-oriented development.”

This article is reprinted in partnership with The Line, an online chronicle of Twin Cities creativity in entrepreneurship, culture, retail, placemaking, the arts, and other elements of the new creative economy. Brian Martucci is The Line's innovation and jobs news editor.