Community developers have always believed in the power of small-business development, but never more so than now. Across the Twin Cities, creative collaborations are helping small businesses thrive and, in the process, sparking new economic vitality and community pride.

On St. Paul’s East Side, in Little Africa along the Central Corridor in St. Paul and along West Broadway in North Minneapolis, small businesses and neighborhood organizations are playing a transformative role in reinvigorating these neighborhoods.

From 1962 to 1997, a Whirlpool factory, the Hamm’s/Stroh’s Brewery, and a 3M plant all shut their doors on the East Side of St. Paul. The loss of these three big employers deeply shook the economic and social roots of the community. It’s taken nearly two decades for the East Side to rise again. But today’s renaissance is being fueled not by big business but by small ones.

One catalyst helping rev the East Side’s economic engine is the new East Side Enterprise Center (ESEC), a job-creation hub supporting new business startups and expansions. Opened this fall, it aims to help establish the East Side as a magnet for culturally distinctive, locally owned businesses. All of its programs operate through an equity lens, focusing on communities that have traditionally been overlooked by economic development strategies.

The center includes beautiful, much-needed community meeting and event space; consultation space for aspiring entrepreneurs and existing business owners; and a storage warehouse/food distribution system for small-scale farmers that allows them to reach larger urban markets. Chief among those markets is the East Side itself, whose residents want better access to healthy, locally grown food.

“The whole economic rebirth of the East Side is being driven by small, minority owned businesses,” says Deanna Abbott-Foster, executive director of the Dayton’s Bluff Community Council, one of ESEC’s two anchor partners. “But often, those entrepreneurs aren’t well connected to mainstream resources and information. We wanted to create a welcoming, friendly place that could help them deal with the business development issues they’re facing and access whatever they need to start or expand a business. These businesses are helping create our community’s future.”

Housed in the historic, remodeled Pabst Grocery building on Margaret Street, the center also includes the offices of the Dayton’s Bluff Community Council and theLatino Economic Development Center (LEDC) — the other anchor ESEC partner. But the full breath of the partnership undergirding the ESEC testifies both to its equity mission and to the remarkable diversity of the East Side. Culturally specific organizations such as the Asian Economic Development Association,Hmong American Farmers Association, African Economic Development Solutions, Native American Community Development Institute and Casa De Esperanza are ESEC partners, along with four other organizations.

“The center is one of those sparkling reminders that there’s an economic and entrepreneurial revival on the East Side,” says Mario Hernandez, vice president and COO of the LEDC. “It’s an opportunity for small business owners to come together to provide important services for the East Side, but it’s also going to be a community-focused space where residents are welcomed for educational and other special events. We’ve already generated a lot of interest among entrepreneurs.”

Abbott-Foster believes that over the next few years, with the help of ESEC, St. Paul’s East Side will attract many new small minority-owned businesses, and see existing businesses expand. “We hope the center helps the voices of minority business owners be better heard, so they can begin to have more impact on regulatory systems and public policy.” In the meantime, ESEC partners look forward to collaborating with many other East Side nonprofits to bring the neighborhood new economic life.

Turning West Broadway into a haven for entrepreneurs

Designated Business Improvement Districts (BIDs) are a tool being used locally and nationally to revitalize commercial districts by providing special services, including banners, holiday decorations, streetscape greenery, sidewalk and street cleaning, snow removal, marketing and other amenities. Combined with the technical assistance to small businesses provided by the Northside Economic Opportunity Network and EMERGE’s workforce development on the North Side, the new Business Improvement District strategy could be a tipping point for West Broadway. 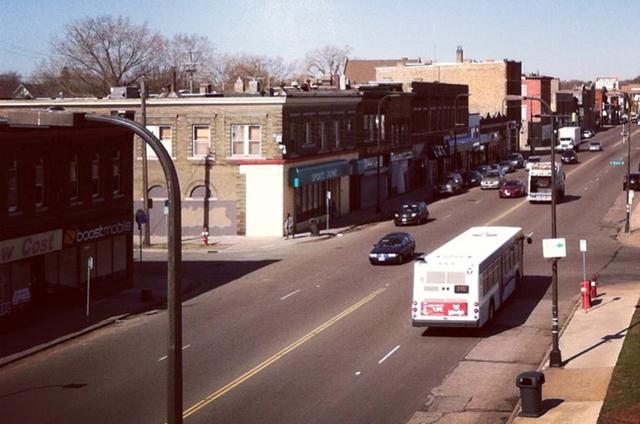 “BIDs have been really successful at decreasing vacancy and crime rates, increasing the number of customers and improving neighborhood vitality,” says Erin Jerabek Heelan, WBBAC executive director. “We’re meeting with entrepreneurs all the time and there’s a lot of interest in West Broadway. In addition to existing retail space, the Minneapolis WorkForce Education and Career Center planned for 800 West Broadway will also include new small business spaces. We expect those to go fast.”

“We hear from residents all the time that they want small businesses on their main street,” says Heelan. “They don’t want a faceless avenue made up of franchises. They want to support local entrepreneurs that hire from the community. They like building relationships with businesses. They understand that our local economy is tied to the success of everyone.”

Small is beautiful in Little Africa

Little Africa is one more illustration of the bustling energy small business can bring to a commercial zone, in this case the area around University and Snelling avenues in St. Paul’s Central Corridor. A newly created cultural and business district, Little Africa was launched earlier this year by African Economic Development Solutions (AEDS) and the Little African Development Group.

Its mission is to leverage the rich and diverse business, arts and cultural assets of the Twin Cities’ growing African immigrant populations to build sustainable wealth within those communities. There are already about 40 small businesses owned by African immigrants located in the district. And thanks in part to its interesting cultural, shopping and dining experiences, Little Africa is becoming a popular destination. One recent weekend arts event there attracted people from15 cities and 32 ZIP codes.

AEDS’s approach to business development is two pronged: Help existing small business owners through programs like facade improvement grants, and reach out to other African business owners to let them know the advantages of relocating in Little Africa. But plans also promote a sense of place, like the new Little Africa Book Club that will regularly bring together college students, professors, business owners and community members in an area coffeehouse to discuss books by African authors.

“Little Africa is going to be a ‘one-stop shop’ for everything,” says Gene Gelgelu, executive director of AEDS. “We’re increasing the visibility of African arts, culture and businesses to attract new customers and create jobs. That will boost the earnings of owners and the economy of the neighborhood, which means higher property values, an increased tax base, and more community engagement and pride.”

Gayle Thorsen is a communications consultant and writer for Twin Cities’ nonprofits and philanthropies. She was former vice president for communications at The Minneapolis Foundation and communications director at The McKnight Foundation. Her website is:ImpactMax.