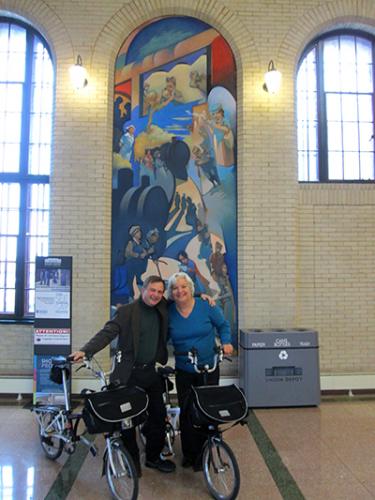 Ken and Roberta Avidor are two worldly residents of Lowertown in St. Paul. They love to travel light and have been completely car-free since 2010. Using Union Depot as their jumping-off point for bike, bus and train trips around the Twin Cities — and beyond — the Avidors have made a name for themselves in the Twin Cities’ booming urban-sketching movement. They sketch at every opportunity, cataloging people, places and things easily missed by those zipping by in their cars — including last spring’s Mississippi River flood in St. Paul.

In fact, the couple is living proof that you don’t need a car to get around: Just witness the collection of local (and not-so-local) experiences on the aptly named Ken & Roberta Avidor Travelblog, which features entries from as far afield as New York and Los Angeles.

In many ways, the Avidors’ embrace of car-free living is a return to their roots. Ken and Roberta met three decades ago at New York’s Parsons School of Design. “Roberta and I lived without a car in Manhattan for many years,” says Ken.

The Avidors bought their first vehicle as a couple in the mid-1980s, when they moved to the Twin Cities and purchased a home in South Minneapolis. Though the couple have always had a human-scale, sustainable approach to living, having a personal vehicle at their fingertips helped with the daily realities of raising a family — shuttling kids to school and activities, making last-minute grocery runs, picking up hardware for weekend home improvement projects.

But with the kids grown and out of the house, the pair found less and less use for the vehicle. One day, they decided they didn’t need a car at all.

“We became uncomfortable with auto-ownership for environmental, urbanist and economic reasons, and looked for practical ways to become less car dependent,” Ken explains. “For us, as artists, being in a car felt like a canned experience.”

When the Avidors sold their Minneapolis house and moved into their Lowertown loft, they left the car behind and fully embraced urban, car-free living.

The Avidors’ home base, near the heart of one of the Twin Cities’ most transit-dense neighborhoods, makes car-free living much more manageable.

“The Union Depot is a transit hub with the Metro Transit Green Line light rail, city buses, intercity bus lines and Amtrak,” Ken says. “And there’s a long-term secure bike parking facility in the Union Depot, for only $7 a month, with bike tire pumps and tools.” In other words, the Depot has everything necessary for car-free survival.

The Avidors do have an HourCar membership. “We have easy access to a couple of HourCar vehicles parked across the street [from our home] if we need them,” says Ken. They fully appreciate HourCar’s convenience and eco-friendly business model. But they’re far more likely to use buses and trains to get around the Twin Cities, and even to travel into outstate Minnesota, Wisconsin and beyond.

Buses and trains can only get you so far, though. In many cases, transit can drop you uncomfortably far from your destination. So how do the Avidors bridge the transit-poor gaps and make last-mile connections once they’ve reached a new neighborhood or city? By bike. By Brompton folding bike, specifically.

The Avidors’ Brompton folding bikes — purchased at Calhoun Cycle in Minneapolis — can easily pack into a specialized bag, and fit in a train or bus storage compartment. The couple has high praise for Jefferson Bus Lines and other local transit providers, whose “progressive luggage policies” make it possible for the Avidors to get around by bike once they reach their destination.

“It’s so awesome to just roll out of a bus or train station on a bike,” Ken says. The couple is gearing up for a series of bus trips next spring, he adds, along as many Jefferson routes as possible. Ken & Roberta Avidor Travelblog will be soliciting destination ideas from the public through the winter and will document all the routes as they occur.

What are we sketching today?

The Avidors’ devotion to car-free living and far-ranging travel dovetails nicely with another passion: art, specifically sketching. Ken and Roberta meticulously record their daily lives in well-worn sketchbooks, embracing the mundane (people standing at the bus stop) and the magnificent (last year’s floods).

“Roberta and I have kept sketching and writing journals since 2000,” says Ken. “We habitually sketch just about everywhere.” He traces the “sketching itch” to an early commission for the Minnesota 2000 Project, when the couple “was invited to keep sketch journals” to commemorate the turn of the century.

The Avidors recently visited Pipestone, Minnesota, for the city’s Paranormal Weekend. In the past, they’ve posted exhaustive sketch collections of trips to Los Angeles, New York and other big-city destinations.

Closer to home, the Avidors belong to two local sketching cohorts, Twin Cities Urban Sketchers and MetroSketchers. Though the associations are informal, they create whimsical visual records of cultural and creative events that don’t always get full press treatment.

Ken recently captured an intimate Ballet Minnesota performance at Union Depot. In September, he dashed off several sketches of the naming ceremony for the St. Paul Saints’ new Lowertown ballpark. And he occasionally contributes his art and time to the St. Paul Almanac.

“Sometimes we like to sketch things because they are a challenge to sketch” — like graceful ballet dancers — or “for an artistic reason which may not be celebratory, like [ruins around] St. Paul,” Ken says. “Ruins are fun to sketch.”

But Ken and Roberta don’t limit themselves to sexy subjects like ballparks, ruins and floods. The Avidors’ car-free lifestyle actually confers a counterintuitive advantage: Ken and Roberta spend a lot of time in bustling public places, like train stations and bus stops. And with so many interesting subjects to choose from, such places help the Avidors hone their craft.

“Situations like waiting in line may be boring for a lot of people, but it gives us an opportunity to study people,” says Ken. “We have lots of sketches in our journals of people relaxing or waiting around looking at electronic devices, for instance. With constantly changing clothing fashions and personal styles, [sketching in public] helps keep our other artwork up-to-date.”

Next up, a graphic novel

The Avidors are always looking for new ways to embrace the creative nexus of bikes, transit and art. For instance, Ken is currently working on Bicyclopolis, a graphic novel that celebrates cycling in a way that only a graphic novel can.

Other artistically inclined Twin Cities residents appear to be getting the message. Recently, says Ken, “more people — not just professional, trained artists — have participated in the MetroSketchers and TC Urban Sketchers sketch-outs,” periodic sketching events open to the public. “We want to encourage more people to sketch,” he says. “It’s lots of fun.”

Similarly by example, the Avidors are convincing their peers to give up their personal vehicles and embrace the car-free lifestyle that works so well for the wandering, worldly couple.

This article is reprinted in partnership with The Line, an online chronicle of Twin Cities creativity in entrepreneurship, culture, retail, placemaking, the arts, and other elements of the new creative economy. Brian Martucci is The Line‘s innovation and jobs news editor, and writes frequently about car-free living.

Embracing the creative nexus of bikes, transit and art