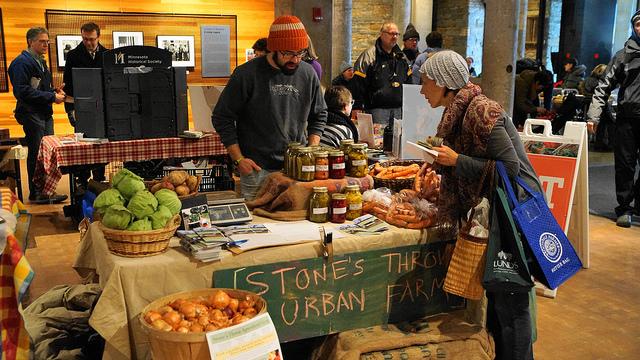 Courtesy of Mill City Times
A scene from a Mill City Winter Farmers Market in 2014.

As the recent polar vortex reminds us, winter is here to stay — for at least a few more months. But that doesn’t mean the Twin Cities’ purveyors of fresh, local produce and artisanal foods have gone dormant till spring. This year, a merry band of farmers market managers and vendors are braving the cold and dark to keep us supplied with locally grown food, locally made food products and locally sourced crafts.

“Local shouldn’t end when summer does,” says Libby Wyrum, market manager at Linden Hills Farmers Market, one of the cities’ most popular winter markets. The emergence of year-round farmers markets is a boon for local producers and craft entrepreneurs.

Most small producers and entrepreneurs can’t afford storefronts of their own. Many struggle to find shelf space at Twin Cities co-ops, natural food stores and craft shops. Those that do find retail space for their items may forfeit a hefty slice of their profits to regional food distributors, which take a big cut to serve as a middleman. And, aside from the holiday rush, winter tends to be slower for retail sales anyway.

“By bringing many producers together under one roof and allowing them to sell direct to consumers during what’s normally a down time for business, we’re creating an affordable distribution model that offers more opportunities for producers to connect with customers—a pop-up grocery store of sorts,” says Wyrum.

The four food entrepreneurs profiled below, and many others with similar stories, take advantage of one or more winter markets (keep reading, there’s a list at end of the article) to maintain cash flow during the slow season, strike up partnerships with other vendors and suppliers, and find customers that might otherwise remain out of reach.

Cathy Winter, daughter of Chinese immigrants, learned to make potstickers as a teen. Through early adulthood, she’d serve her creations at Chinese New Year celebrations and other gatherings. Friends eventually convinced Winter to go into business, so she set up the Gather Gourmet website to test the waters. “My goal was basically not to lose money,” she laughs.

Her Potsticker of the Month Club remains a popular draw. Winter does a brisk catering business in Minneapolis and the west metro, mostly through word of mouth and online referrals. But the Twin Cities’ booming farmers market scene, and winter markets in particular, “totally changed how I look at my business and opened up a whole new world for me,” says Winter. She sold 90 dozen frozen potstickers, a then-unprecedented figure, in her first session at Fulton Farmers Market.

At the Linden Hills Farmers Market, where she spent most early winter weekends, Winter tapped into a groundswell of optimism and enthusiasm amid local entrepreneurs and buyers alike. “It’s exciting to be part of something new, to help build a market from the ground up,” she says.

Though attendance doesn’t reach summer’s heights, Winter sees other perks of winter market participation: networking, name recognition and exposure to new customers. “I don’t just look at [the markets] in financial terms,” she says. “By being there, I’m finding opportunities that wouldn’t otherwise be available.”

For instance, at Linden Hills, Winter struck up an informal partnership with a woodworker at an adjacent stall. He needed something to demonstrate proper chopstick use for customers, so she offered a few potsticker morsels. In exchange, he offered some advice about Mill City’s winter market, an expansion target for Winter. With customers engaged by the demonstration, sales spiked at both booths. More serendipity: Mill City’s manager, on the hunt for new vendors, stopped by Winter’s booth.

Tammy Thompson started Tammy’s Sammys, a pop-up restaurant that specializes in fresh sliders, after ending a two-decade career in the real estate business. With little startup capital, a restaurant or food truck was out of the question. So Thompson gathered together some cooking equipment and rented a stall at Linden Hills, where she immediately forged fruitful connections.

“I’m a social junkie,” she explains. “The market offers a unique opportunity for me to meet new people and share what I have to offer.”

Like Winter, Thompson values winter markets for promotion and networking. She’s lined up several catering clients — the bulk of her business — at Linden Hills. Sue Zellickson of Women Who Really Cook, an influential business development organization for female food entrepreneurs in the Twin Cities, caught wind of Thompson through Linden Hills. According to Zellickson, winter markets are the best place to find unheralded food entrepreneurs during the Twin Cities’ cold season.

Thompson isn’t exclusive to the Linden Hills market. She makes weekly or monthly taproom appearances at Fair State Brewing Cooperative, Insight Brewing Company and Northgate Brewing Company. These sessions are great for connecting with new retail customers, she says, but can’t rival the visibility and synergies of her market stall.

Thompson sees the Twin Cities’ winter markets as a steppingstone to bigger things. She’s actively exploring storefront options in Northeast Minneapolis, possibly along Central Avenue. If business takes off, she insists she won’t forget her roots at Linden Hills.

Glacier has an ambitious vision for Nuclear Nectar: He aims for shelf space at co-ops and natural food stores throughout the Twin Cities, plus exposure at national chains like Whole Foods. For now, however, he relies on booths at the Minneapolis Farmers Market and Linden Hills market to carry business through the winter months and “plant the seed” in customers’ minds.

“I love being up close and personal with the people who enjoy my sauces,” Glacier says. “Ultimately, store space is the way to go [for commercial success], but the markets help me engage with the community and build my customer base.”

Having prepared-food makers like Thompson around doesn’t hurt either. For every bottle Glacier sells, he tells the customer to buy a sandwich or hot dog and spread on his sauce.

Thomasina Petrus is a professional jazz singer and actor (you may have seen her at the Guthrie Theater, among other venues), and an avid baker. Like Winter, Petrus basically fell into her role as co-owner of Thomasina’s Cashew Brittle: She made one too many batches, got a little too much attention from friends and the rest is history.

Petrus and sister-in-law Leslie — an engineer with entrepreneurial experience — work as a team, with Petrus making their signature brittle and Leslie handling accounting, promotion and clerical duties. Thomasina’s started as an online business. It still earns the bulk of its revenue through its website and a lucrative partnership with Kowalski’s, but Leslie’s success selling homemade candles at various Twin Cities markets convinced the two women that the brittle business could also benefit from market exposure. With homestyle brittle especially popular around the holidays and through the winter, a winter market was a natural fit.

Thus far, Thomasina’s only operates at the Linden Hills winter market, though next year may bring new opportunities. “The winter market is a great opportunity to find new customers and say, ‘Here, try this great brittle … and by the way, you can buy it any time at Kowalski’s,’” says Petrus.

Outside the market, the two women have another promotional trick up their sleeves: so-called random acts of brittle. “When we see someone who really looks like they could use some brittle, maybe if they’re waiting for the bus in the cold or watching their kids at the park, we give them some for free,” explains Petrus. “But we tell them they have to share.”

Kingfield, Fulton and Nokomis Farmers Markets are operated by Neighborhood Roots, a South Minneapolis nonprofit. Each market has a separate summer location, but they band together at Bachman’s Garden Center for monthly markets in winter. Perks include live music from Bob & Lynn Dixon and One Ukelele, and fresh beer on tap from Fulton Brewing Company.

This article is reprinted in partnership with The Line, an online chronicle of Twin Cities creativity in entrepreneurship, culture, retail, placemaking, the arts, and other elements of the new creative economy. Brian Martucci is The Line‘s innovation and jobs news editor.